Disease that blinded, killed thousands of US birds may be tied to eating Brood X cicadas

A mysterious deadly disease that was killing thousands of blue jays, robins, starlings and other songbirds across the mid-Atlantic US this summer seems to be subsiding, according to wildlife experts.

Ornithologists still don’t know exactly what led to the strange syndrome, which caused crusty discharge in fledglings’ eyes, as well as seizures, paralysis and death.

The leading theory is the birds were poisoned by Brood X cicadas, whose geographical distribution — and emergence and retreat this summer— lines up nearly perfectly with the rise and decline of diseased bird carcasses being reported.

‘It was Virginia, West Virginia, Maryland, Delaware, New Jersey, Pennsylvania, and then it moved over to Tennessee, Kentucky, Ohio, Indiana.’

Experts have theorized the birds were eating the cicadas and suffered a toxic reaction, either because of the pesticides once-every-seven-year pests had been sprayed with or due to deadly fungi they naturally carry.

Since May, thousands of robins, grackles, blue jays and other songbirds have been found dead or dying, with discharge around their eyes and neurological impairments. Pictured: A bird found in Washington, D.C. in May with swollen eyes and crusty discharge

Sick and dying birds were first documented in the Mid-Atlantic in May, and by early July, there were thousands of cases across nine states, including in the Midwest and South.

Bunting points out the unknown killer ‘completely skipped New York and the rest of New England,’ just like Brood X did this summer. 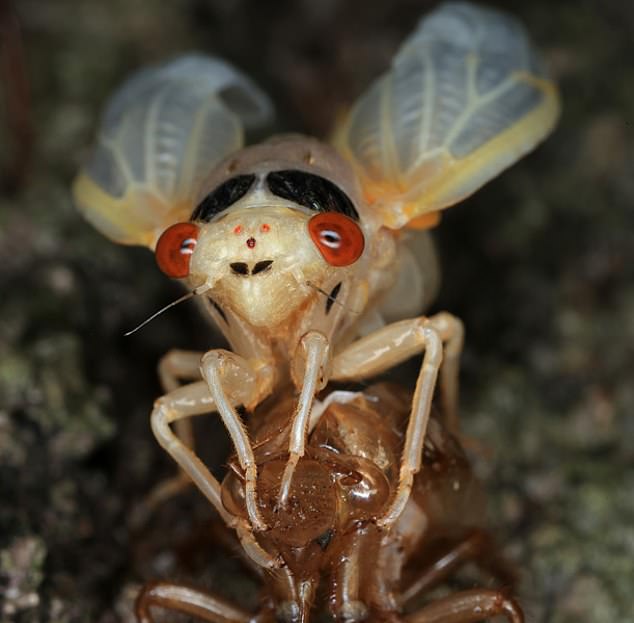 The emergence of the Brood X cicada in May coincides with the first reports of the bird deaths. Its retreat now similarly matches a decline in cases 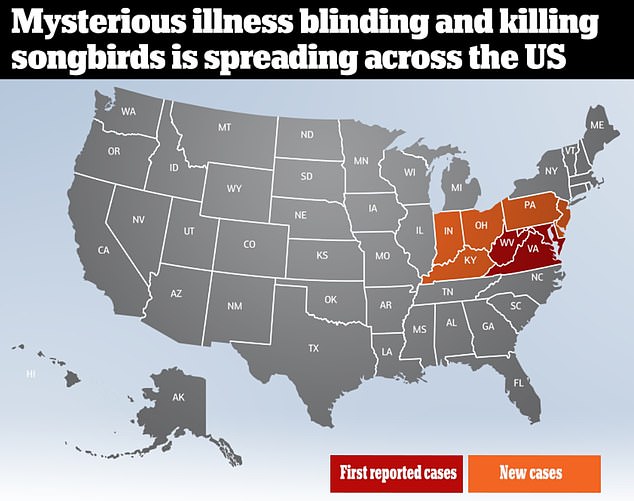 Cases of the unknown illness were first reported in songbirds in Maryland, Virginia, Washington D.C. and West Virginia in early May 2021. Through July, hundreds more surfaced in Delaware, New Jersey, Pennsylvania, Ohio, Indiana, and Kentucky 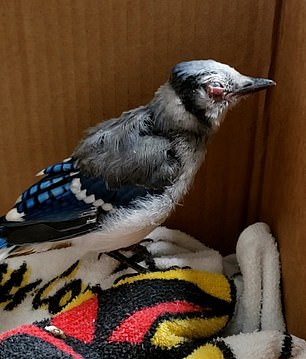 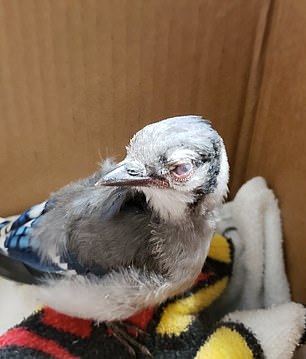 The mystery illness seemed to affect young birds that were  otherwise in good condition, ‘likely still being fed by their parents. Pictured: A songbird captured in Virginia exhibits eye swelling and discharge, symptoms of the mystery disease

Many of the birds have crusty, swollen eyeballs, according to a June statement from the United States Geological Survey, ‘accompanied by wobbly movements that suggest neurological issues.’

The New Jersey Department of Fish and Wildlife reported that most of the impaired birds were otherwise in good body condition, ‘likely still being fed by their parents.’ 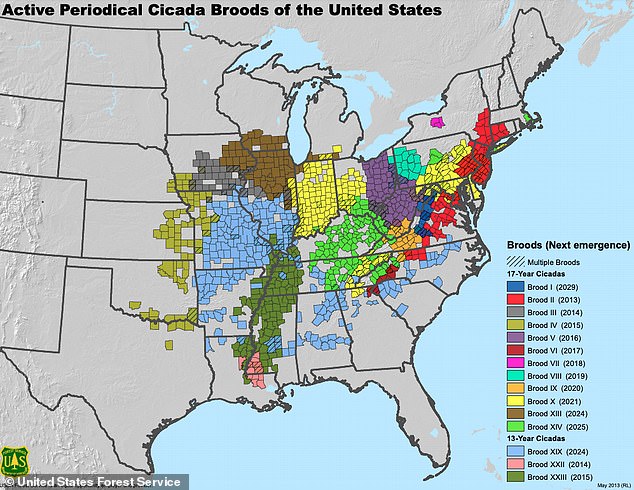 A map of past, current and projected Brood X cicada swarms. The swarms in 2021 line up with reports of diseased songbirds 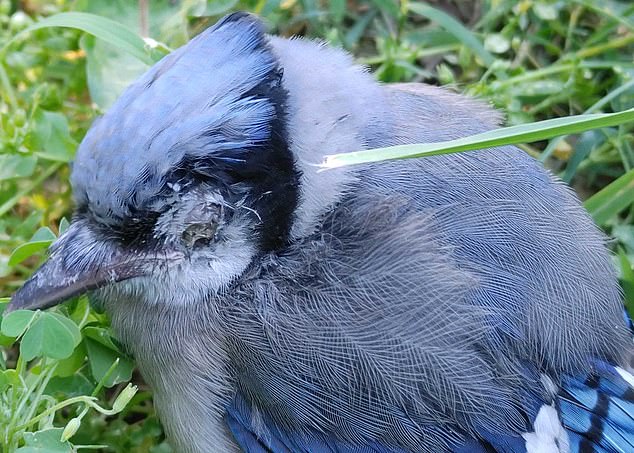 Mycoplasma, a fairly common bacterial infection in finches, can cause swollen eyes but hasn’t been associated with seizures or other neurological symptoms.

‘Over the course of weeks, no one was finding anything infectious,’ Bunting told the Sun.

‘They did a lot of testing but could not come up with any disease process, and the rehabilitators were telling us they were trying antibiotics and things like that, but they did not have great effectiveness.’

They also confirm the disease has not been linked to any health issues in humans, livestock or poultry. 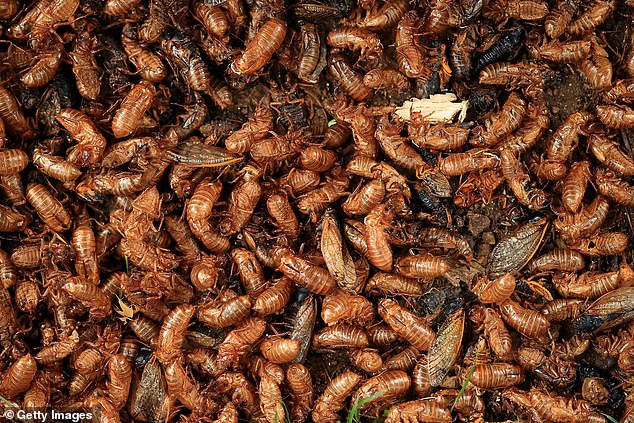 A pile of dead and dying Brood X cicadas and their cast off nymph shells at the base of a tree in Columbia, Maryland. Experts believe birds are eating the periodical pests and getting poisoned by pesticides on their shells or fungi they naturally carry

Wildlife experts in Maryland, Virginia, Washington D.C. and West Virginia first started receiving reports of the infection in that same month, when it was linked with at least 325 cases of sick or dead birds.

Between May 23 and June 30, the Virginia Department of Wildlife Resources received 1,400 reports of sick or dying birds, with roughly a third described as having eye issues and/or neurological signs.

By August 19, it reported ‘reports of sick and dead birds have declined in many jurisdictions.’ 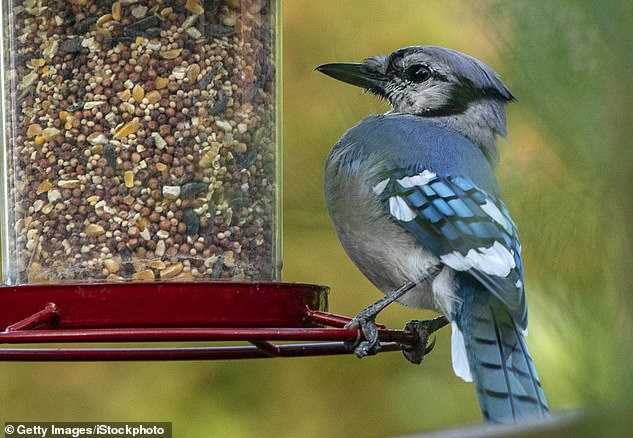 The Kentucky Department of Fish and Wildlife Resources said it had received 2,300 reports of sick or dying birds since its online reporting system went live on June 17, but only 282 ‘are believed to be related to the unexplained bird illness.’

In addition, the number of reports coming in ‘has steadily declined since the end of June.’

Environmental agencies had asked the public to remove bird baths and bird feeders during the outbreak, but many state agencies have begun rescinding that recommendation.

Anyone encountering sick or dead birds is encouraged to contact their local wildlife conservation agency or submit a report to the United States Geological Survey’s mortality event form.