Diseases that could be helped by nerve zapper technology

What if there were a single treatment that could help heart disease and depression, insomnia and painful joints — even Covid-19.

In fact, some scientists believe such a remedy could be readily available on the NHS within the next few years, and it is already being rolled out for some conditions.

The treatment involves gently stimulating a major nerve that runs through the body using an electric current so mild that in most people it causes just a slight tingling sensation.

Called vagus nerve stimulation (VNS), it works by sending or interfering with electrical nerve signals to and from the brain. VNS is attracting interest from scientists around the world as a potentially highly effective, drug-free remedy for numerous conditions — and there are now at-home devices that claim to do this, too (see panel below).

The latest discovery is that VNS may help reduce the impact of Covid-19. In a three-month trial at a hospital in Buenos Aires, Argentina, 51 patients admitted to hospital with severe Covid-19 were given VNS to dampen down life-threatening inflammation in their airways caused when the immune system overreacts.

The results showed VNS led to ‘a low rate of adverse events, infrequent mechanical ventilation, and a high rate of survival’, reported the Journal of Emerging Diseases and Virology in July.

This is just one of a number of clinical trials under way to assess the use of VNS in Covid patients.

‘I think in future, vagus nerve stimulation will be a routine treatment for a wide range of diseases and disorders,’ says Dr Ben Metcalfe, a specialist in electrical engineering at Bath University.

‘It has huge potential because the vagus nerve connects the brain with many parts of the body, carrying electrical signals that control everything we do.

The vagus nerve, which is roughly 3 mm in diameter, is the longest nerve in the body, linking the brain to organs all over the body such as the heart, lungs, liver, kidneys and digestive system (‘vagus’ comes from the Latin for wandering).

Scientists describe it as the ‘motorway’ of the nervous system, allowing nerve signals to travel in both directions, so the brain can understand what’s going on in different parts of the body and also transmit instructions to keep everything running smoothly.

It helps to manage everything from our breathing, heart rate and sense of taste to blood pressure, alertness and speech. 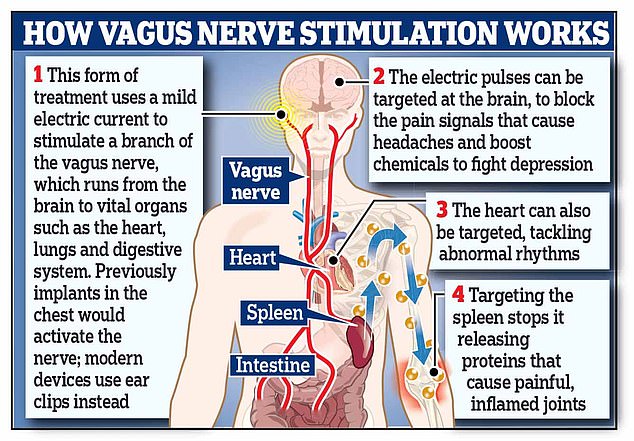 Called vagus nerve stimulation (VNS), it works by sending or interfering with electrical nerve signals to and from the brain. VNS is attracting interest from scientists around the world as a potentially highly effective, drug-free remedy for numerous conditions — and there are now at-home devices that claim to do this, too

Vagus nerve stimulation first emerged as a medical therapy in the 1980s, when doctors began to use it to treat severe epilepsy that did not respond to medicines.

Here, a small generator, the size of a matchbox, is placed in the chest under a general anaesthetic and is connected to the vagus nerve with wires, where it runs just beneath the skin in the neck.

Electrical impulses from the generator — triggered by the patient when they feel a fit coming on by waving a special magnet over the implant — travel up the nerve and into the brain, dampening down the irregular electrical activity that causes seizures.

It works in around 50 per cent of cases, halving the number of seizures and reducing their length and severity. But it can have side-effects such as persistent coughing, sore throat and stomach or neck pain, because the stimulation can irritate the nerve where it runs through these areas.

According to some estimates, around 3 per cent of implant patients develop an infection around the site, while one in ten of the devices can develop broken leads, which can stop them working and need replacing.

But now the treatment has been simplified by using external generators that don’t require surgery — such as ear clips — and has been tested to help tackle some of our major health problems, for example, correcting the faulty heart rhythms that drastically increase the risk of a stroke, or boosting levels of feelgood chemicals in the brain to banish depression.

Here we look at some the latest uses for VNS, some that are already available and others that will soon be offered.

‘Cluster’ headaches are so painful they’re widely known as ‘suicide’ headaches, with studies suggesting that up to two-thirds of sufferers have contemplated taking their own lives during an attack. Ordinary painkillers such as paracetamol or ibuprofen have little or no effect.

In 2019, NHS England agreed to fund a £3,000-a-year therapy that uses a handheld vagus nerve stimulator — called gammaCore — that is pressed against the side of the neck for two minutes to interrupt the flow of pain signals in the brain. Gel is applied to two electrodes on the top of the device, it is held firmly against the neck and, at the press of a button, a mild electric current zaps the vagus nerve. Patients feel a deep vibration but no pain.

It can be used at the first sign of a cluster headache to ease pain, or daily to prevent them.

The National Institute for Health and Care Excellence (NICE) says: ‘Clinical evidence shows that, for some, it reduces the frequency and intensity of cluster headaches and can lead to significant quality of life benefits.’ NHS England says the device is being made available to ‘anyone who needs it’, although to have the treatment patients have to be referred to a neurologist.

In recent years, researchers have experimented with using special ear clips connected to a pocket-sized power pack — rather than implants — to deliver vagus nerve stimulation. That’s because a tiny branch of the nerve reaches the auricular concha, the shell-like entrance to the ear.

The rationale is that delivering a mild electric current into this part of the ear is safer and less invasive than implanting a generator.

Clinical trials are under way to see if the ear-tickling therapy can cure atrial fibrillation, an abnormal heartbeat that affects more than one million people in the UK, causing an estimated 16,000 strokes a year.

It happens when electrical activity in the heart goes haywire, sending faulty electrical messages to the heart muscle and causing it to beat irregularly (called arrhythmias), which raises the risk of clots forming inside the heart that can travel to the brain and cause a stroke.

Treatments include the blood-thinning drug warfarin, to stop clots forming, cardioversion (where the heart is shocked back into a normal rhythm) or ablation, in which probes heated up to 70 c are fed into the heart via an incision, to destroy the tissue generating the faulty rhythms.

A trial at Oklahoma University in 2018 found patients with atrial fibrillation given one hour a day of VNS through ear clips, experienced an 85 per cent drop in the number of episodes of arrhythmia over the next six months .

Dr Svetlana Mastitskaya, a researcher at University College London, who is studying VNS to treat heart conditions, says: ‘We think we can use it to shield against the abnormal electrical signals causing atrial fibrillation, without the need for ablation.

However, the treatment is not without risk. Studies show up to one in 1,000 people who have vagus nerve stimulation can suffer heart block, where the heart’s electrical pulses go haywire, potentially causing dizziness, shortness of breath and chest pain. Those with atrial fibrillation are most at risk — and heart block can lead to them needing a pacemaker to control electrical signals.

Scientists at the Sorbonne University in Paris have tested the therapy on 14 patients with osteoarthritis of the hand, where age-related wear and tear has broken down cartilage in the wrist and finger joints. This causes pain and inflammation that can make everyday tasks, such as screwing the lid off a jar, very difficult.

The patients were asked to score their pain levels on a zero to 100 rating — where 100 was the worst. Before starting the treatment, average pain scores were around 60 but after a month of daily VNS therapy using ear clips attached to a small generator, this dropped to 44, according to a report in the journal Osteoarthritis and Cartilage in 2020. The effect is thought to be owing to reduced inflammation.

The treatment has a different mechanism with rheumatoid arthritis, where similar benefits have been seen in studies. This condition is triggered by a malfunctioning immune system, causing severe and painful inflammation in joints.

Scientists think stimulating the vagus nerve — either through ear clips or an implant in the upper chest — dampens down this inflammation by acting on the spleen, an organ in the abdomen which is responsible for producing cytokines, proteins that are key to our immunity but which can go into overdrive, causing damaging inflammation.

Dr Mastitskaya says the electric impulses travel along the nerve to the spleen, where they suppress the release of cytokines. She adds: ‘There’s even some evidence that this will work in other serious conditions where inflammation is causing harm, such as inflammatory bowel disease and Crohn’s disease.’

A 2020 study at Grenoble University in France, involving nine adults with Crohn’s given VNS implants that activated the nerve round-the-clock for a year, found it significantly reduced painful inflammation in the bowel.

Never mind sleeping tablets. Getting a good night’s rest could soon be a matter of firing up the vagus nerve before bed, with research suggesting this improves night-time sleep quality and reduces daytime drowsiness by stimulating the release of the sleep-inducing hormone melatonin in the brain. The hormone, produced when it starts to get dark, acts on receptors on cells throughout the body to encourage sleep. Insomnia is typically treated with ‘Z’ drugs (e.g. zopiclone, zolpidem and zaleplon), which slow the brain’s activity.

But long-term use has been linked with side-effects including falls caused by drowsiness, memory loss and aggression. Now, scientists at Peking University in China have looked at VNS ear clips as a treatment for it — in a study involving 63 insomniacs, half attached the clips to the correct area in the ear, the rest to the outer edge, where the vagus nerve does not pass.

Each person used the device for 30 minutes every night before bed for a month. The results, in the journal Evidence-Based Complementary and Alternative Medicine in 2020, showed those getting the nerve stimulation had fewer problems nodding off and were less drowsy in the day.

The vagus nerve helps to promote a relaxation response in the nervous system when the body needs to rest — stimulating it makes the pineal gland in the brain make more melatonin.

But independent sleep expert Dr Neil Stanley warns: ‘This was a fairly poor-quality study. We can’t be sure the apparent benefits were all due to VNS.’

More than seven million Britons take antidepressants to tackle depression and anxiety. But up to 50 per cent see little or no significant improvement and the drugs can cause side-effects such as nausea, weight gain, loss of sex drive and insomnia.

In the U.S., VNS — delivered via the chest with wires connected to the vagus nerve in the neck — has been approved as a treatment for depression since 2005. It is thought to stimulate the release of the brain chemical serotonin, which can enhance mood.

In the UK, the treatment is not approved because of a lack of strong evidence that it works. However, some specialist private and NHS centres have implanted devices in patients who have run out of other treatment options, with some success.

Dr Simon Cork, a lecturer in physiology at Anglia Ruskin University, says: ‘We know the vagus nerve has a direct connection to the brain’s higher centres, such as those involved in emotion — and stimulating it also stimulates those regions. But the data on depression are not that strong and so it is not currently recommended by NICE.’

The Royal College of Psychiatrists says: ‘It’s investigational and should not be performed unless as part of approved research protocol.’