An unimpressed footy fan has been caught casually reading a book in the stands during an AFL game where her team was thrashed.

The St Kilda Saints 111-point loss against the Western Bulldogs on Saturday night was going so badly by the fourth quarter the woman was driven to distraction.

Even coming equipped with reading glasses, she wore her team’s scarf as she turned her attention to the literature while other fans were spotted yawning around her.

‘The Saints fans are starting to read some books now,’ the commentator sighed.

While she was reading The Reading Group by Elizabeth Noble there the score was only at 115 to 26, meaning the Bulldogs would still go on to score another 18 points.

Fox Footy tweeted the footy with the caption: ‘Definitely more interesting than this game’.

Luckily the public saw the funny side of the unusual moment as the footage was also shared to Instagram.

‘The Saints must be fun watching!,’ one wrote.

‘Seems about right if you’re a Saints fan,’ wrote another. 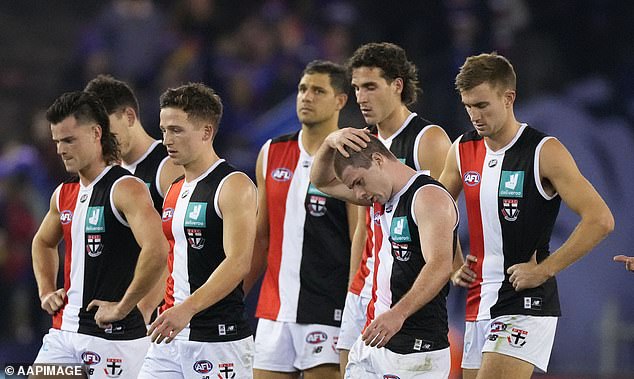 ‘Awww hang in there baby,’ added a third.

While others questioned why she even stayed at the game.

‘Should of just stayed home,’ commented one.

‘Why pay money to go to the footy and read a book?,’ another added.

‘She’s very bored maybe should be home relaxing and read her book,’ wrote one.

However some fans praised the woman for staying at the game until the end of the game.

‘At least the stayed for the final siren,’ one commented.

‘At least they are showing up for their team win or lose,’ added one.