Thousands of guests at Disney World are being evacuated from hotels and campgrounds in Orlando as Hurricane Ian is baring down on Florida and set to bring destruction from the 15ft waves and 140mph winds.

The park is currently still open and operating under normal conditions, with the company ‘monitoring’ the situation.

Typhoon Lagoon, Fort Wideness Resort & Campground, and Copper Creek Cabins at Wilderness lodge will all temporarily close for two days due to the weather.

Disney’s Saratoga Springs Resort & Spa and the Bungalows at the Polynesian Village Resort are also closed, and guests with current and upcoming reservations are being contacted.

Cancellation policies are also not being enforced by the television giant, with performances around the Fort Wilderness resort being cancelled.

The resort has been battered by heavy rain the past few days, with thousands of visitors braving the weather to enjoy the parks.

The monster storm has been upgraded to a Category 3 hurricane, as it is currently lashing Cuba, with the National Guard on standby in Florida.

Disney and Universal resorts in Orlando, Florida, are currently set to remain open as some hotels are cancelling guests reservations and evacuating the area. Officials for the company say that they are ‘monitoring’ the situaton 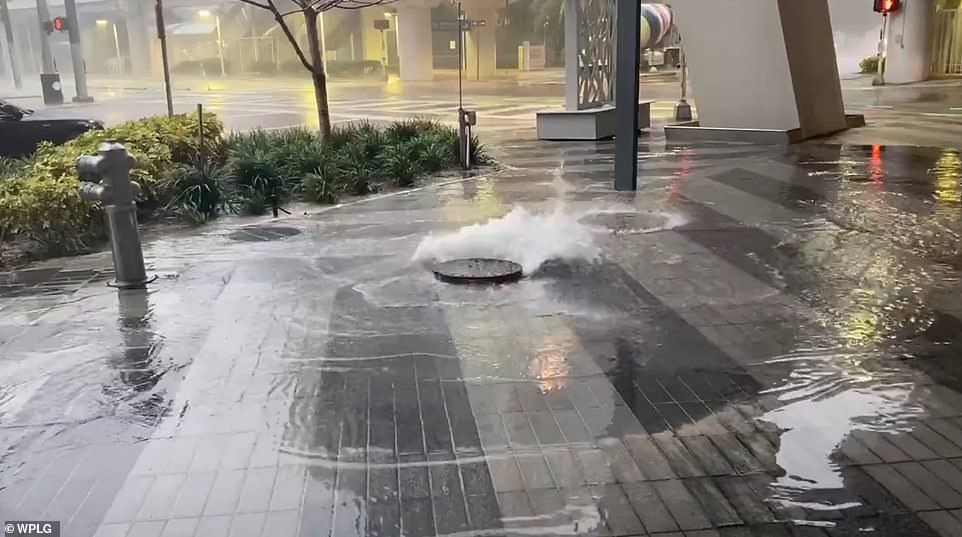 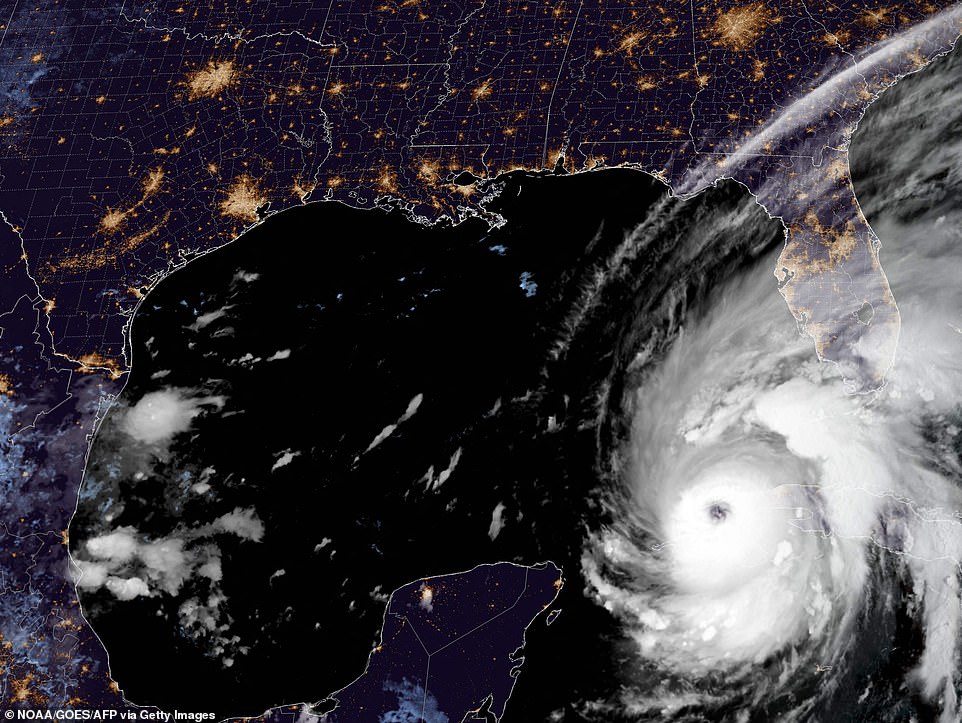 Ian made landfall in western Cuba early Tuesday, with the storm prompting mass evacuations and fears it will bring widespread destruction as it heads for the US state of Florida 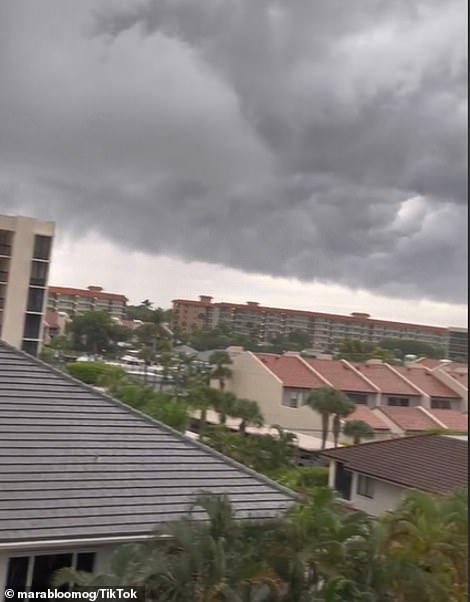 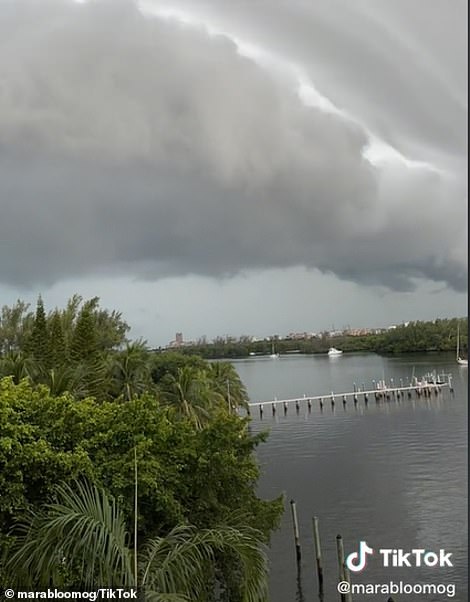 Residents in Florida are capturing the storm clouds as the first signs of hurricane Ian hit the Sunshine State on Tuesday, with winds of up to 140mph expected

The National Hurricane Center confirmed the storm made landfall in western Cuba at 4.30am local time, lashing the island with rain and sustained winds of 125mph.

It is location within an evacuation zone but is considered critical infrastructure and can stay open as long as needed, with visitors banned and workers will secure aircraft, jet bridges and ground equipment.

The airport will reopen once it can safely assess damage, survey road conditions and bring in staff.

St Petersburg airport is also set to close after threats of being hit by the Category 3 storm, as it is in the projected path.

All planes and flights will be closed for a number of hours, but it is not clear when the terminal will reopen after closing at 1pm.

Miami is also being battered by flooding and rainfall, with drains overflowing with water and cars strugglign to make it through flooded parts of the city.

Thousands of locals were evacuated from across Cuba, with officials in the Sunshine State warning residents to ‘get out now’. 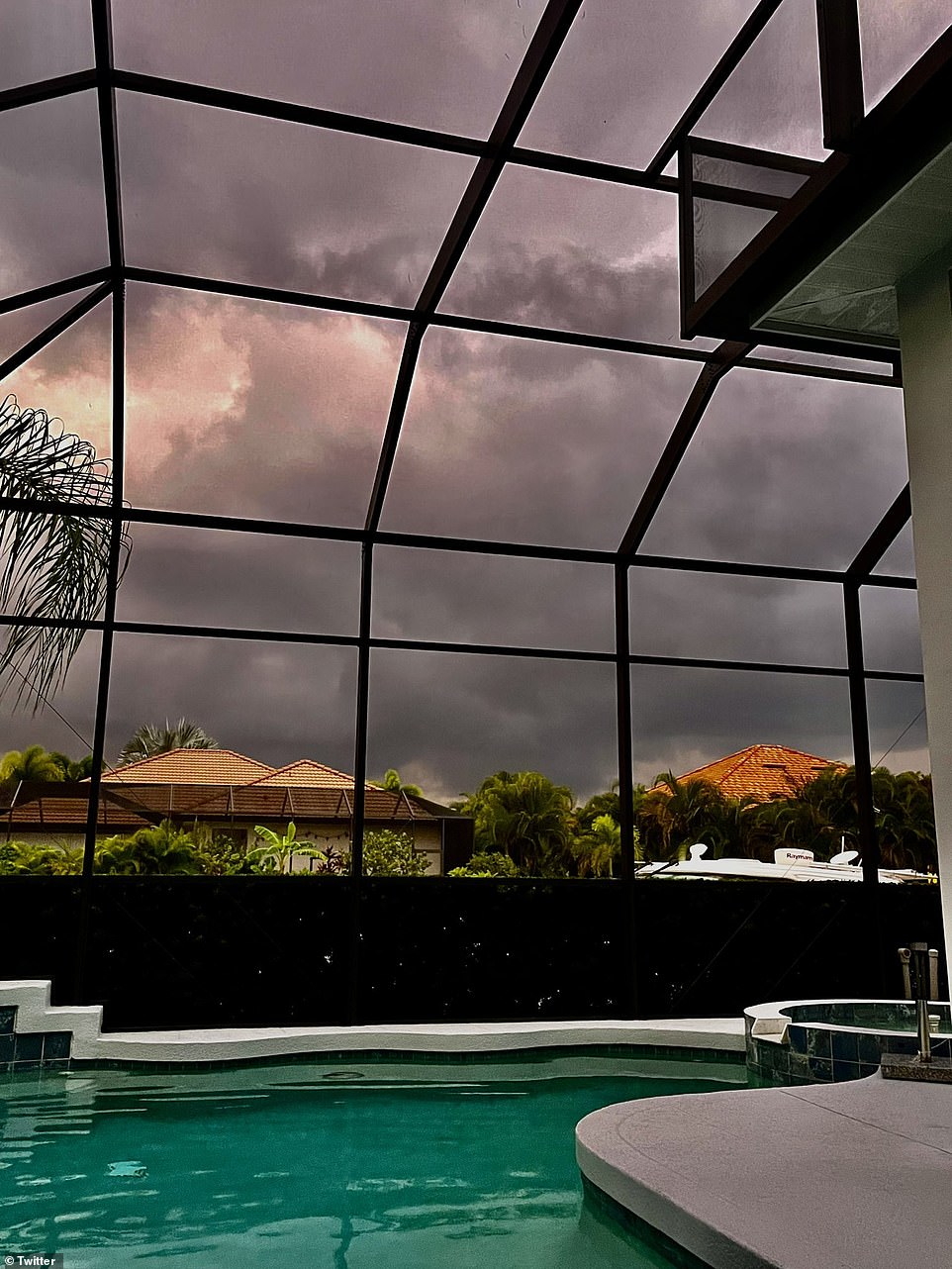 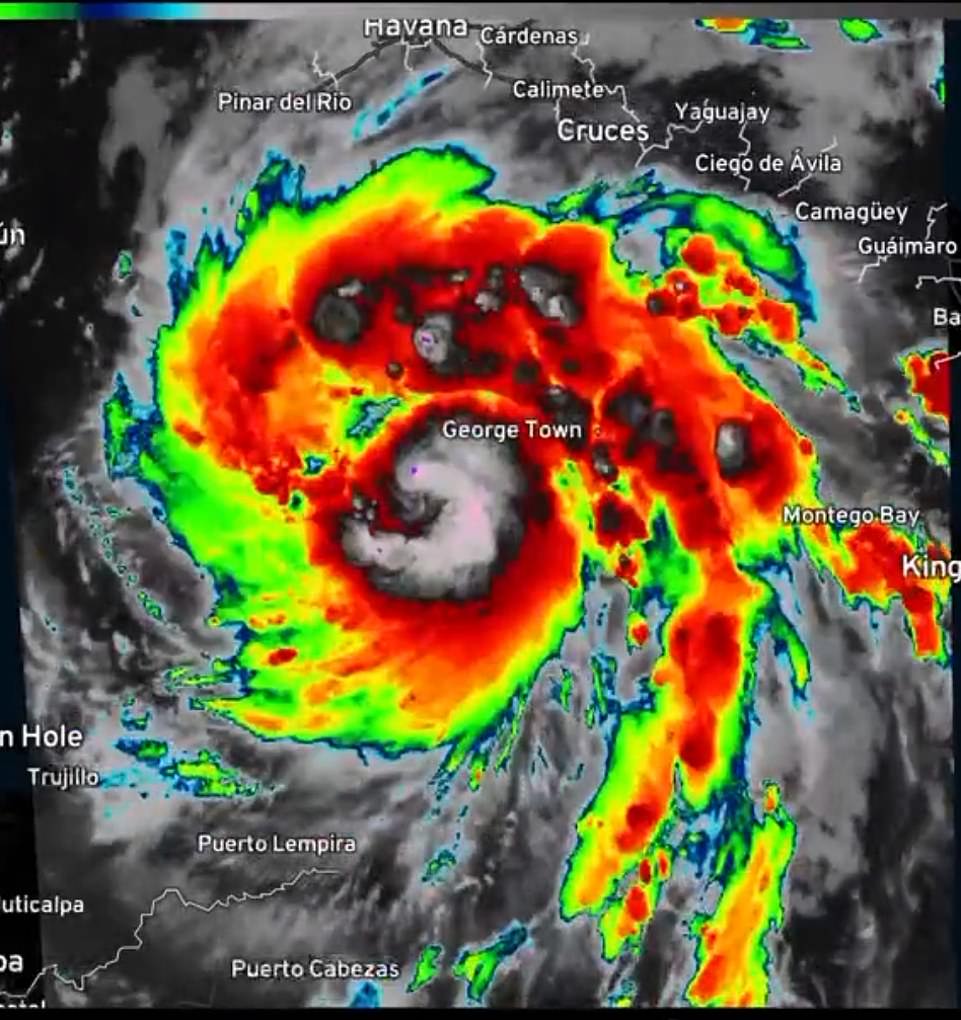 The National Hurricane Center confirmed the storm made landfall in western Cuba at 4.30am local time, lashing the island with rain and sustained winds of 125mph 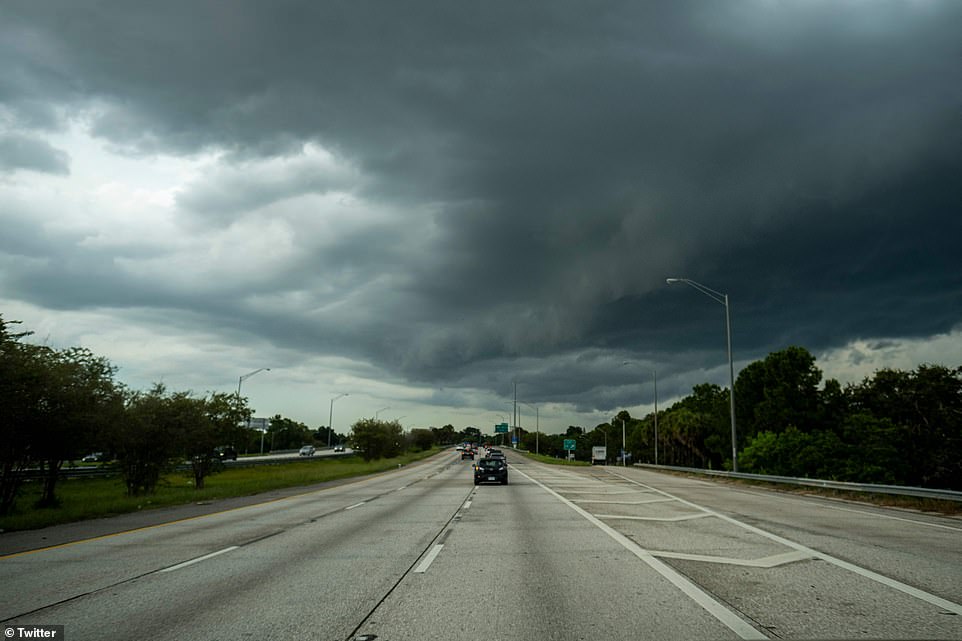 St Petersburg airport is also set to close after threats of being hit by the Category 3 storm, as it is in the projected path. Dark clouds covered the roads close to the airport on Monday 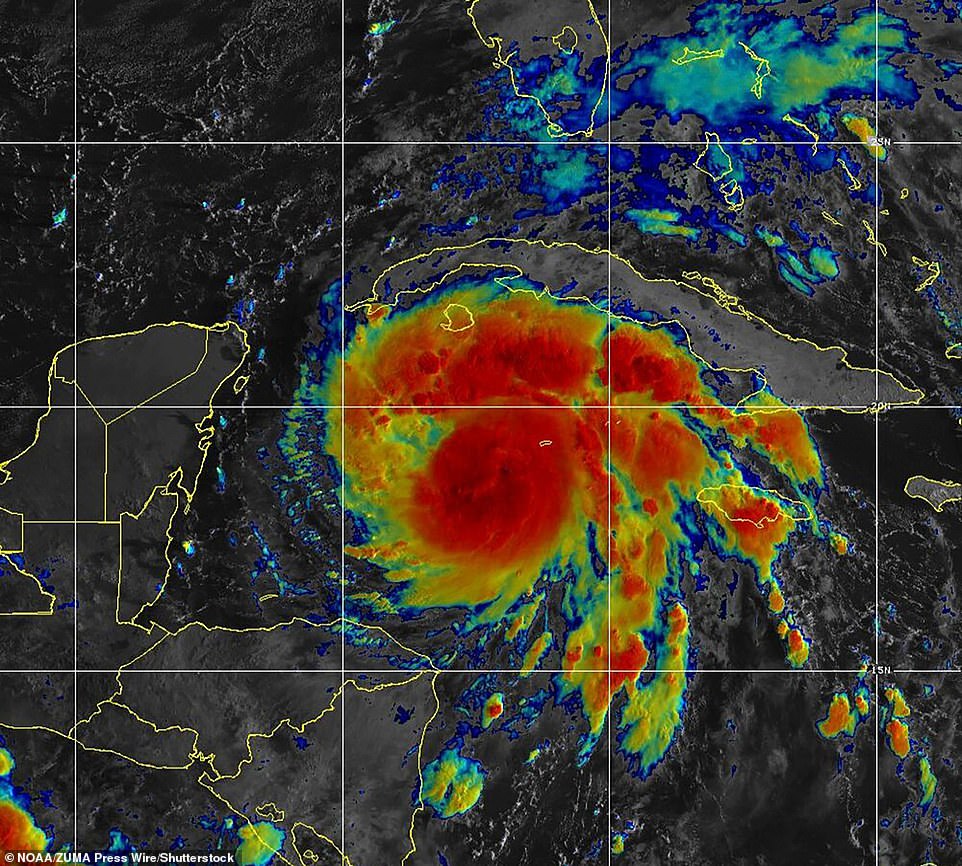 Hurricane Ian, shown here over the central Caribbean, is expected to make landfall in the United States on Wednesday 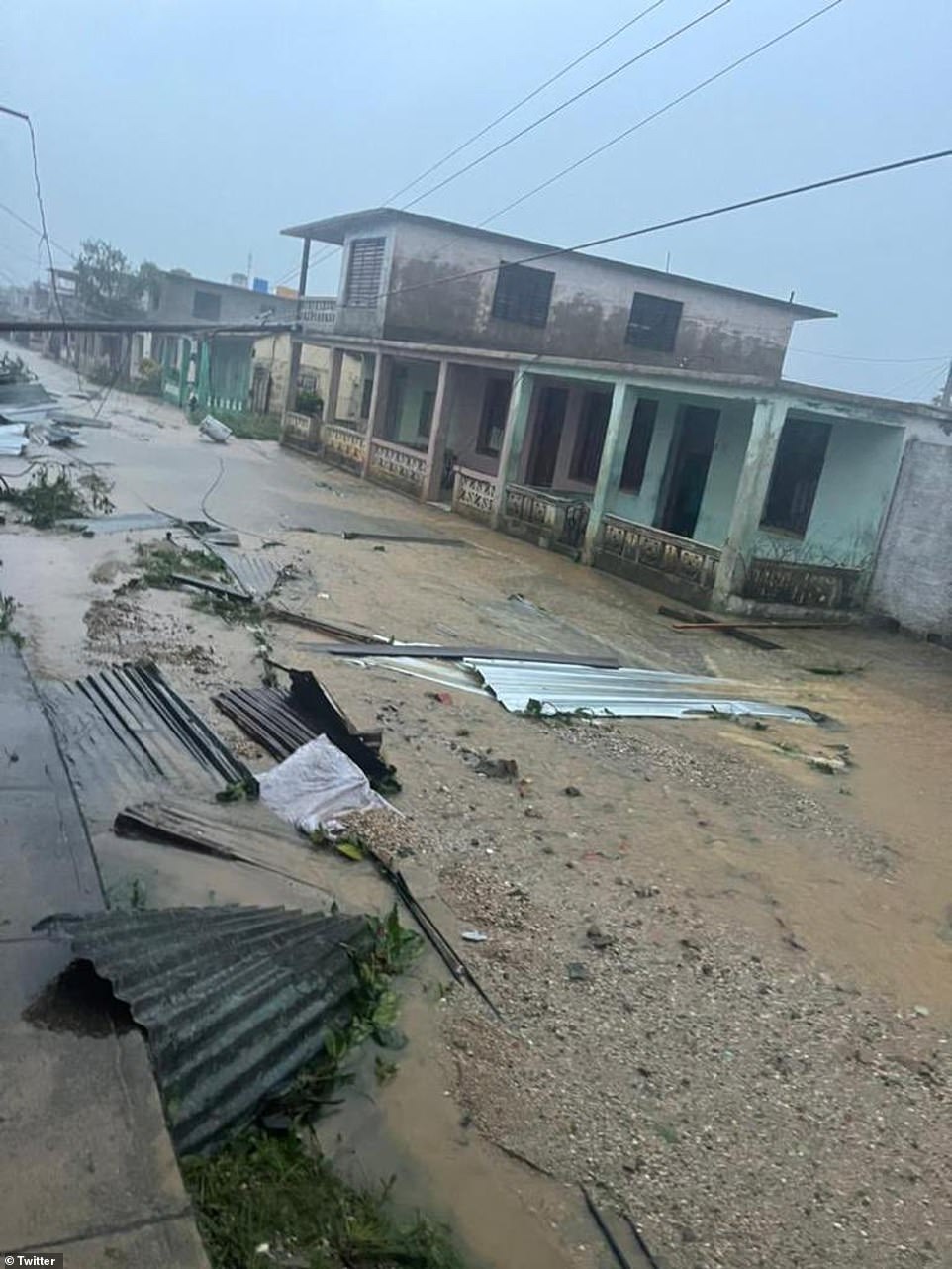 Destruction has hit Cuba hard, after authorities carried out evacuations on Monday in an attempt to protect the island from the storm

After barrelling its way through Cuba, the hurricane is forecast to strengthen even further over the warm Gulf of Mexico waters before reaching Florida as early as Wednesday as a Category 4 storm with top winds of 140mph.

The hurricane is expected to past west of the Florida Keys late Tuesday before approaching the west coast of Florida on Wednesday, prompting locals to scramble to stock up on food, water and medicine.

Local officials in Florida ordered more than 300,000 people to evacuate their homes in Hillsborough – including Tampa – Manatee, and Hernando counties, with more expected to follow.

A surge of up to 10ft of ocean water and 10 inches of rain is predicted to drench the Tampa Bay area, with as much as 15 inches in isolated areas – enough water to inundate coastal communities.

Terrified residents have been desperately digging huge trenches to redirect flood water from their homes while others have stripped supermarket shelves bare of water and essentials.

Floridians lined up for hours in Tampa to collect bags of sand and stock up on essentials from supermarkets as they prepared to bunker down ahead of the monster weather front. 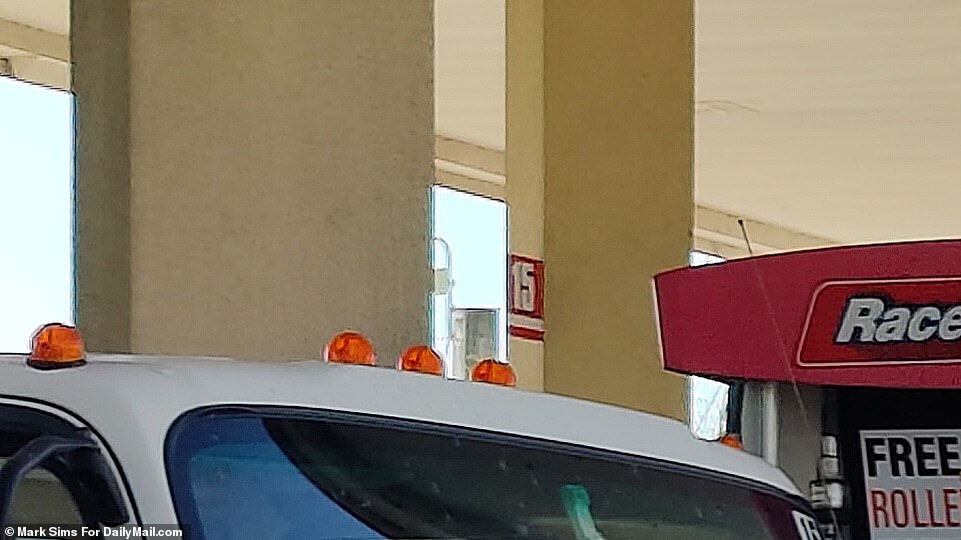 People have been desperate to fill up on gas, causing huge queues at many stations as others are preparing by sandbagging roads outside their properties in an attempt to limit the damage 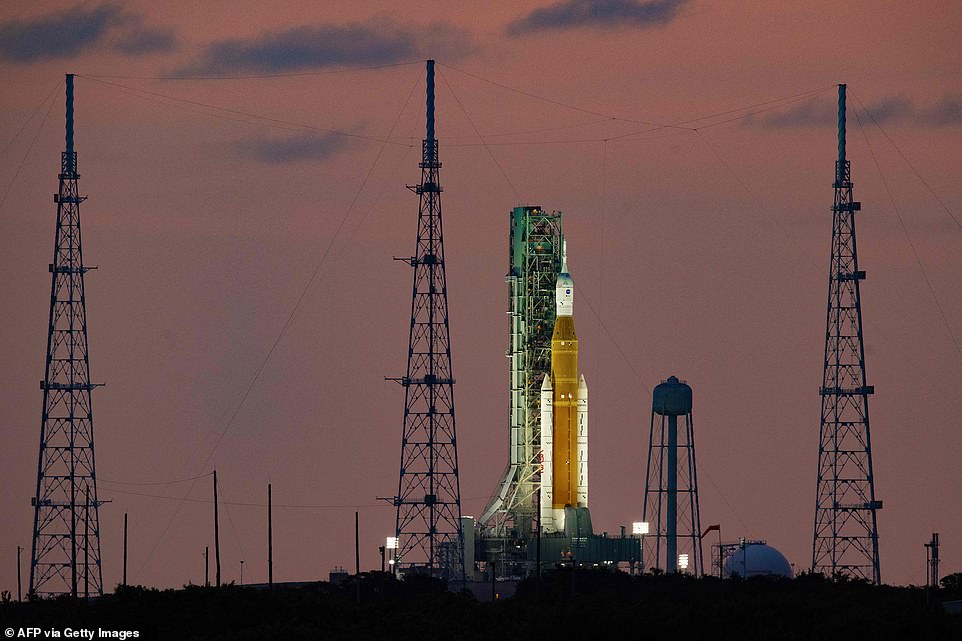 Florida Governor Ron DeSantis declared a state of emergency in all 67 counties as he called up 7,000 National Guard members to help with the effort.

Tampa International Airport said that it would suspend its operations on Tuesday at 5pm local time (2100 GMT) before the hurricane is set to hit the area.

In Cuba, 50,000 people in Cuba’s western Pinar del Rio province were evacuated to safer locations, 6,000 of them to 55 state-run shelters and the rest to the homes of relatives and friends.

The island’s west coast is set to see as much as 14ft of storm surge, as officials rushed to protect crops in China’s main tobacco-growing region. 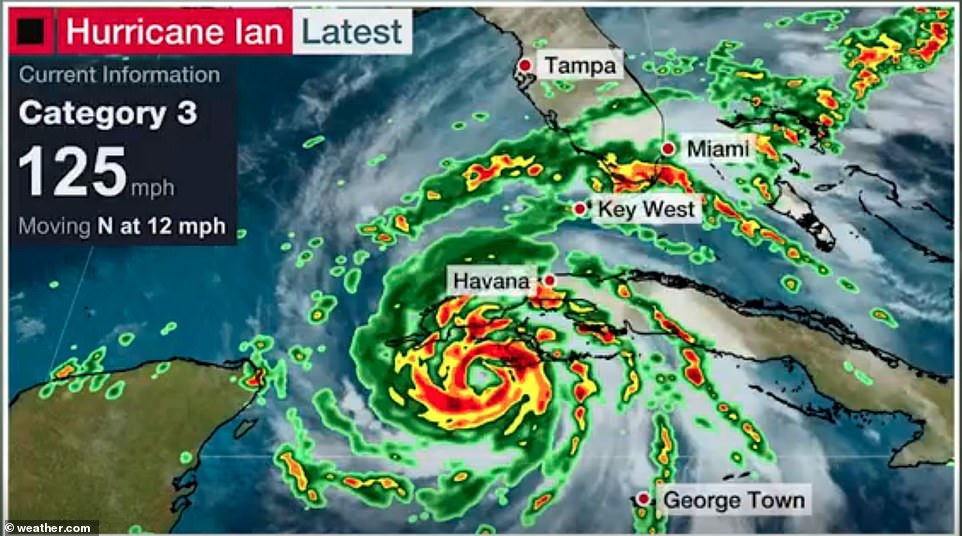 Thousands of members of the National Guard are on standby in Florida as the state braces for Hurricane Ian, which is set to bring a trail of destruction as a result of 15ft waves and 140mph winds 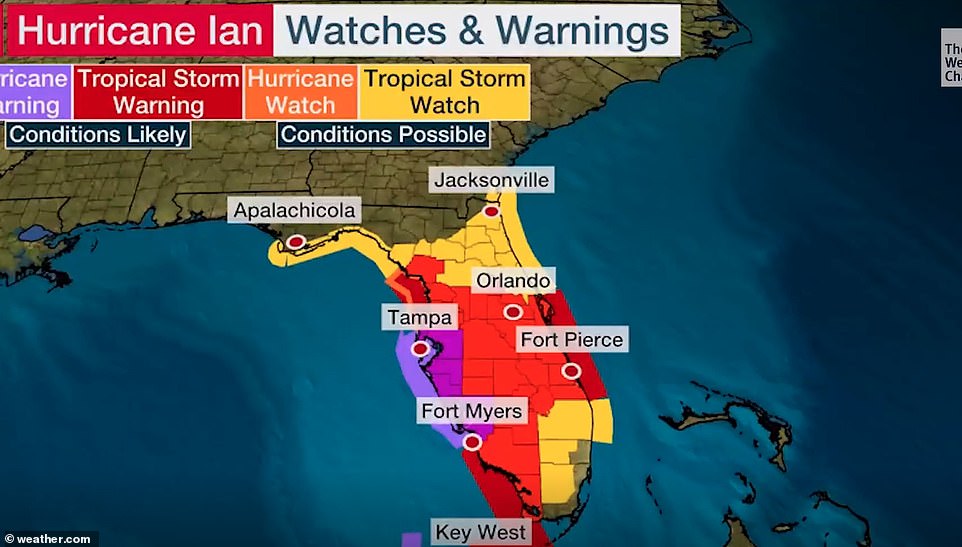 After barrelling its way through Cuba, the hurricane is forecast to strengthen even further over the warm Gulf of Mexico waters before reaching Florida as early as Wednesday as a Category 4 storm with top winds of 140mph

NASA have also been forced to delay the launch of its Artemis rocket again because of the hurricane barrelling towards the coast – meaning they will not be able to attempt anther launch for at least three weeks.

The 322-foot-tall rocket has been rolled back four miles to the Vehicle Assembly building at the Kennedy Space Center.

On Monday, DeSantis warned of heavy traffic amid reports that some highways were bumper-to-bumper for around 50 miles.

The governor said: ‘When you have millions of people in a metro area, no matter how it’s done, you’re going to have traffic. That’s just the reality.’

In a statement on rationing, a Publix spokesperson said: ‘As we continue to monitor Ian, Publix locations may limit quantities of items, such as water, to best serve the majority of our customers.’

The statement went on: ‘We have seen increased purchases on items such as bread, water, batteries and canned goods, just to name a few.’