Storage rooms full of bodies and discarded coffins piling up outside the building could also be seen in the footage, as the city burns bodies on an ‘industrial scale’.

The video report from Sky News, which has been investigating the crisis in the country’s capital, also says that there is a three-day waiting list before Covid-19 victims can be taken to the crematorium.

The country has now reached its ‘peak moment’ in the coronavirus crisis according to Mexican officials, but many people doubt the government’s assertion that the curve is flattening.

Mexico’s true mortality rate could be five-times higher than the government’s figures state, according to Sky News sources, with morgues, crematoriums, funeral homes and hospitals running out of space to store bodies in its capital city.

In footage from Sky News, black smoke can be seen billowing out of the chimneys of a crematorium in Mexico City, which is reportedly burning bodies on an ‘industrial scale’

The first cases of the coronavirus in Mexico were recorded on February 28. Since then, the number of coronavirus cases officially reported by the government has risen to 42,595, with 4,477 related deaths.

However, what the investigating reporters have seen in the city indicates that the official government data is inaccurate.

Sky News also said that health department insiders believe the mortality rate in Mexico could be as much as five times higher than the official figures suggest.

The Mexican government has claimed that the country has reached its ‘peak moment’ and has been able to flatten the curve, and that they expect to see a decrease in the number of Covid-19 related deaths in the coming days.

‘What the world knows about Mexico is that we are taming the pandemic, and we are basically doing this because Mexican people are making a conscious effort,’ said the country’s president Andres Manuel Lopez Obrador during a briefing to the nation. 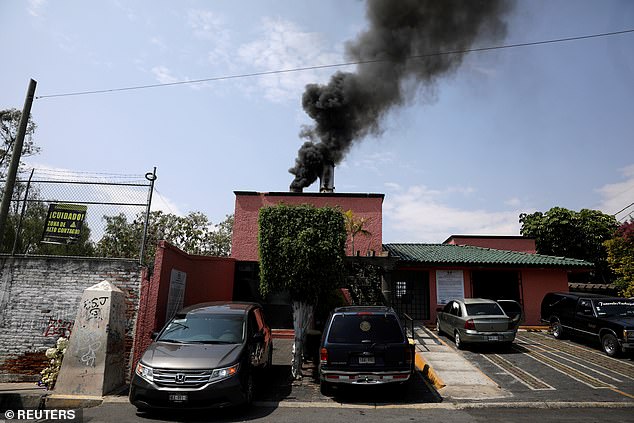 A funeral home in Mexico City, with black smoke billowing out of the chimneys, pictured on May 11 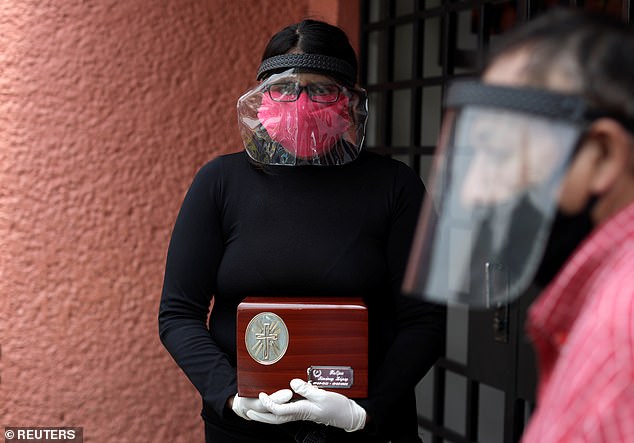 America Denise Flores carries the urn with the ashes of her mother Felipa Jimenez, 68, who died due to the coronavirus disease, away from a funeral home in Mexico City, May 11

Assistant Health Secretary Hugo López-Gatell echoed the president’s suggestion that the country had seen the worst of the pandemic.

He said that yesterday was the ‘the most difficult moment of the first wave of the epidemic’, but added that the country ‘could not relax measures’ that are in place to slow the spread.

López-Gatell’s comments – an epidemiologist and Mexico’s coronavirus tsar – come despite the country preparing to easy some lockdown measures that have been in place to slow the spread of the coronavirus.

On Monday, Mexico is due some of its key industries, including mining, construction and vehicle assembly, which makes use of a number of factories near the U.S. border.

According to the BBC, López-Gatell said that the re-opening of these businesses at this stage will mostly be preparatory, and that a more broad restart is set for June 1.

In much of Mexico City, which is the second largest city in Latin America, Sky News says there are almost no social distancing measures in place, with some businesses and open air markets operating normally despite the pandemic.

‘The ovens never stop burning,’ says the Sky News report, as the footage shows thick black smoke billowing out from a crematorium in Mexico City, where they are cremating bodies on ‘an industrial scale.’

The crematorium is reportedly at full capacity as the number of bodies being delivered continues, with hearses queuing outside waiting to deliver. 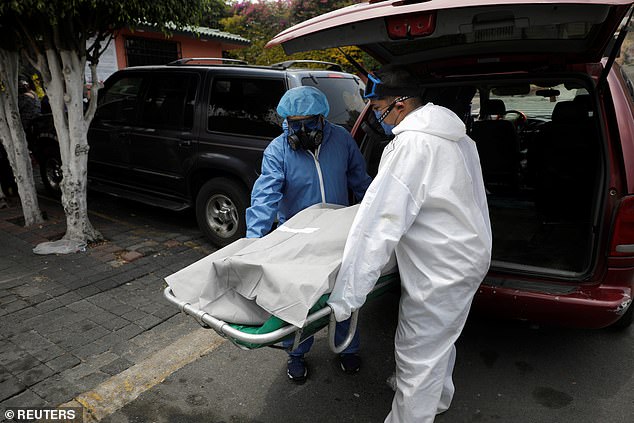 Workers at a funeral home in Mexico City bring another body to be cremated. Hospitals, funeral homes and crematoriums are reportedly all at full capacity with Covid-19 victims 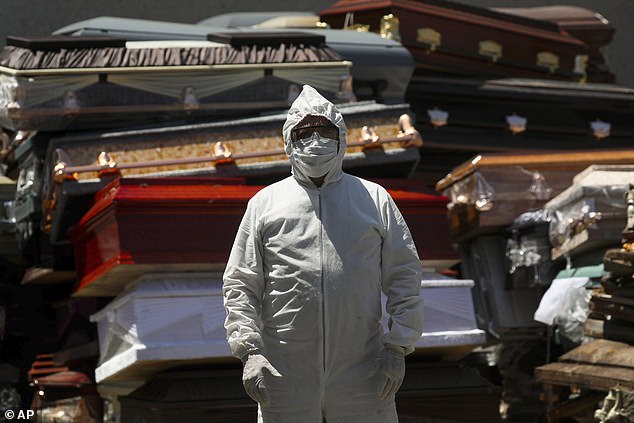 An employee of a crematorium in Mexico City awaits the arrival of another body suspected to have died from the coronavirus. Behind him, a pile of discarded corpses sit in the car park

Crematorium workers are shown wearing full hazmat gear as they unload hearses and take coffins into the crematorium’s storage, and the large ovens.

Discarded coffins are then shown outside of the crematorium, waiting to be cleared. The video was reportedly captured early morning, and a large pile of coffins can already be seen forming outside.

The footage then shows the investigator walking through the morgue, showing bodies lying on gurneys, waiting to be burned, as the narrator explains that they have visited numerous crematoriums, hospitals and funeral parlors in the city.

All are at full capacity, struggling to deal with the number of bodies. Furthermore, Government data released on Thursday showed that more than half of the hospitals in Mexico City were at full capacity with coronavirus patients. 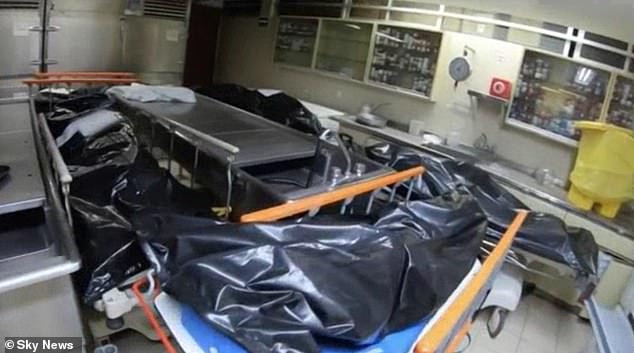 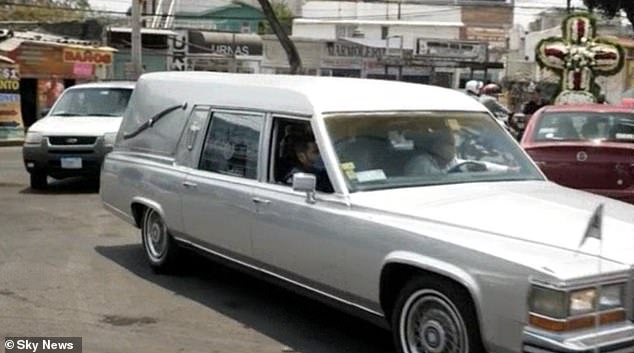 Storage rooms and autopsy rooms are also being used in the mortuaries to store bodies as the fridges are completely full.

‘Everyone is lying, obviously. Everything here is a mess’ says a man interviewed by the Sky News reporter. He is waiting for his sister to collect the remains of her husband.

He says that the government won’t give exact numbers of how many people have died. ‘And I’m not just talking about Mexico City,’ he says, ‘but the entire country.’

Outside the crematorium, the footage shows mourning families saying goodbye to their deceased loved ones, as only five people can enter the building at one time. 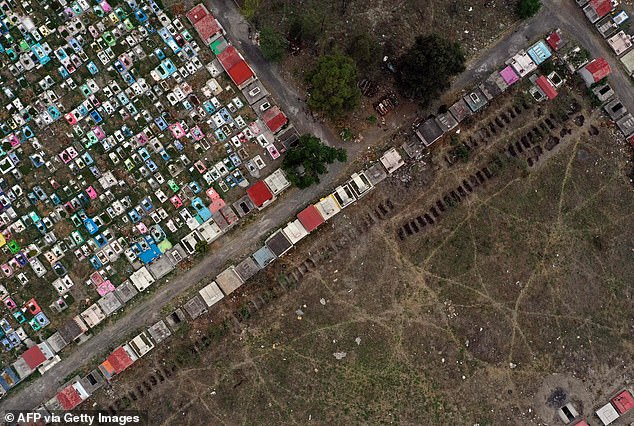 As the death toll in Mexico continues to rise, the Mexican government have claimed the curve has been flattened. Pictured: new graves are built inside the Pantheon of San Lorenzo Tezonco in Mexico City on May 14 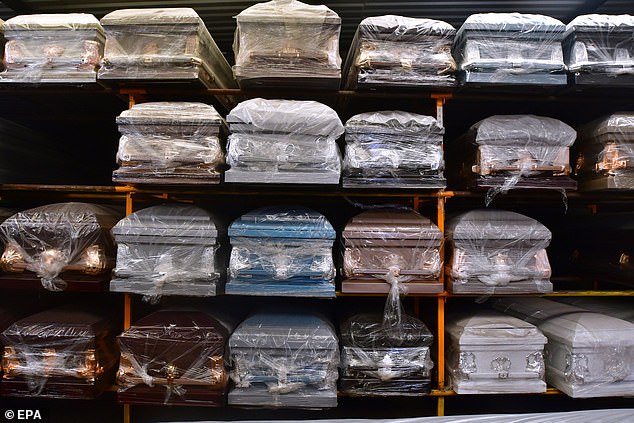 Mexican casket makers face their own challenge to keep up with the demand, which has risen by 15 per cent, and fight competition from the black market. Pictured: coffins of the Litomex company in Mexico May 13

Many of those dealing with the pandemic in Mexico have dismissed the government’s assertions that the curve has been flattened.

When senior private sector medical specialists first warned the government about the pandemic in January, they were reportedly told that there was ‘nothing the government could do’, increasing the belief that the government is letting the virus take its course, willing to deal with the fallout later.

By not publishing accurate death figures, it is believed that the government is trying to contain panic in the poorer areas of the city that have been hit the hardest by the virus.

Mexico City has an unofficial population of 30 million, with millions living in poverty and cramped conditions, perfect for the virus to spread among the population.

Yesterday, Mexico saw its biggest spike in the number of cases, rising by 2,409, bringing the official total to 42,595. It was the first time the country had seen more than 2,000 fresh cases in a single day.

On Wednesday, the country recorded its highest number of Covid-19 related deaths, with 353, taking the total to 4,477. 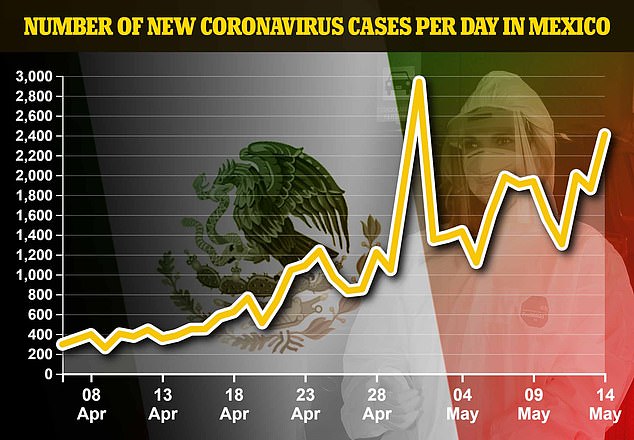 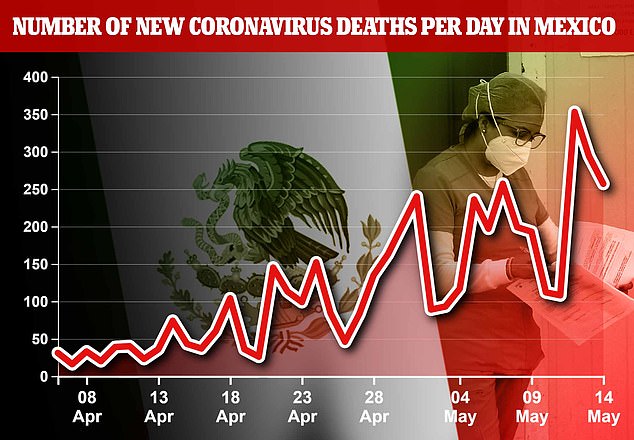