Shocking CCTV footage shows the moment a driver is pummelled and kicked to the ground in a violent road rage attack in Queensland.

Melissa Susan Hargreaves is among a group of three people involved in beating the man in a wooded area in the Gold Coast suburb of Nerang last September.

A video clip shown in Southport Magistrates Court shows Hargreaves’ boyfriend Shane Gregory Armstrong repeatedly punching the man on the ground as she kicks him in the head.

After getting a few kicks in, she is seen trying to restrain her partner who continues beat the defenceless man.

A third person was seen lingering in the background as the assault took place.

Hargreaves pleaded guilty to assault occasioning bodily harm on Tuesday and was sentenced to 12 months in prison but was granted immediate parole, the Courier Mail reported.

Magistrate Pamela Dowse rebuked the woman during the hearing, saying: ‘The first thought I had when I saw that was what would a woman want to do that for? 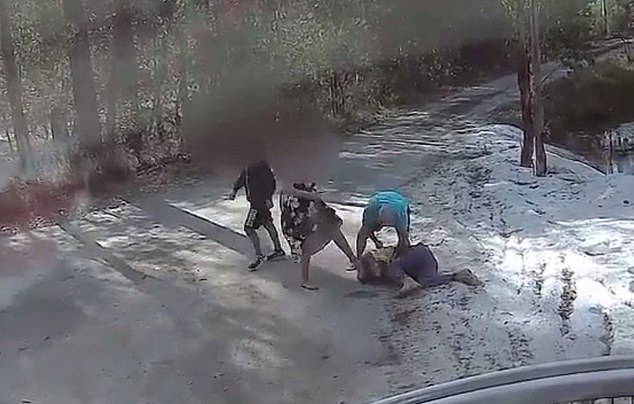