Scientists have released a shocking computer animation showing Antarctica emerging from under its ice sheet due to melting linked to rising temperatures.

Researchers from the Postdam Institute for Climate Impact Research say the warmer it gets, the faster the ice will melt and could lead to a 20ft rise in sea levels.

The team haven’t put a time scale on their predictions, but some experts suggest the entire continent will be ice-free within 150,000 years if nothing changes.

The shocking video shows the predicted rapid disappearance of the ice sheet as temperatures continue to climb – the higher they rise, the more ice disappears.

Even small rises can have a big impact – but a rise of more than 7.2F over pre-industrial levels – twice the current minimum target – would see a 20ft sea level rise.

This would have devastating impact on low lying countries as well as cities like London, Tokyo and New York, the researchers claim.

A recent UN study found the world is not on track to meet the Paris Agreement goal of preventing global average temperatures increasing by 2.7°F, claiming there is a one-in-four chance that temperatures will exceed that level at least once in the next five years.

Antarctica – Antarctic Peninsula – Palmer Archipelago. If temperatures continue to rise Antarctica could lose all of its ice sheet, revealing the continent underneath 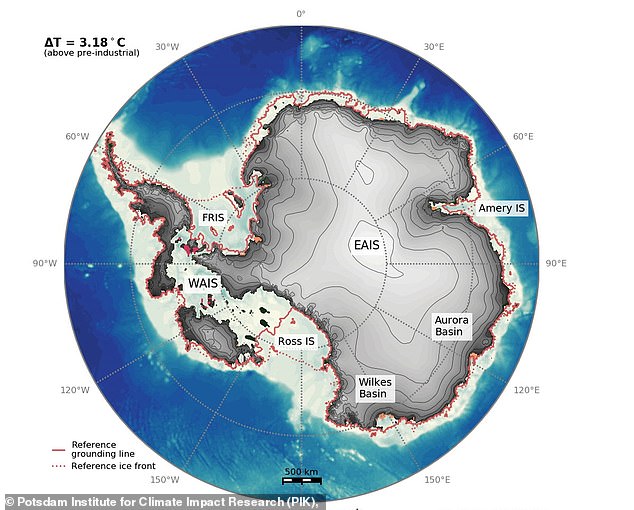 Researchers claim if temperatures increase by about 7.2F Antarctica will lose some of its ice sheet but also lead to global sea levels rising by up to 20ft. Here at about 5F a large proportion of ice has disappeared and sea levels will rise accordingly, experts claim

The disturbing computer animation shows how Antarctica will become green and earthy if it loses its ice sheet – something not seen for millions of years.

For Antarctica to become completely ice free, global temperatures would need to increase over pre-industrial levels by rise by a global average of 23.8F – the last time they were that hot was during the Cretaceous period 100 million years ago.

Andrew Shepherd, Director of the Centre for Polar Observation and Modelling, University of Leeds, said these are all ‘long-term predictions’.

“These are long-term predictions of how much ice Antarctica will have lost in perhaps 150,000 years’ time.

‘Although we won’t be around to see it, it’s a stark warning that the melting can’t be reversed unless we can cool our planet to below pre-industrial temperatures. Now is the time to act.’

Global sea levels will rise by about 20ft if the temperature is sustained long enough at 7.2 degrees F higher than pre-industrial levels, the researchers warned.

However, if temperatures are sustained at more than 10.8 degrees Fahrenheit above pre-industrial levels then sea levels will rise by 39 feet.

That level of global sea level rise may not happen for centuries, but we are on target for a notable increase within the next 80 years, a recent study found. 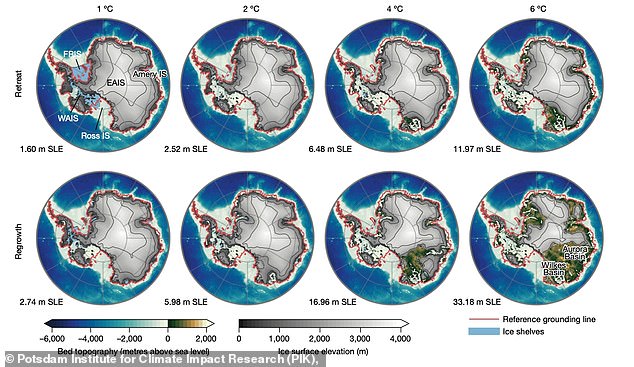 Researchers from the Postdam Institute for Climate Impact Research say the warmer it gets the faster the ice will melt and could lead to a 20ft rise in sea levels if temperatures pass 7.2F

‘Without urgent mitigation the future for low-lying communities, including some of the world’s greatest cities, is even more under threat.’

Ice sheets in Greenland and Antarctica are losing mass at the ‘worst case scenario’ rate predicted by the UN – and could result in sea levels rising by 16 inches by 2100.

Ricarda Winkelmann, a climate scientist involved in the study, said Antarctica holds more than half of the Earth’s fresh water, frozen in vast ice sheets. 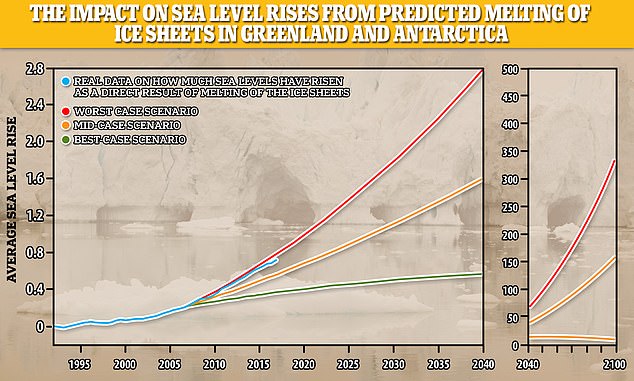 ‘As the surrounding ocean water and atmosphere warm due to human greenhouse-gas emissions, the white cap on the South Pole loses mass and eventually becomes unstable,’ Winkelmann explained.’

Because of the sheer magnitude of Antarctica’s potential for sea-level contribution – a 3.6F temperature rise could result in the warming, melting and accelerated ice flow into the ocean. This will lead to a global sea level rise of 8ft from Antarctica alone.

Chris Rapley, Professor of Climate Science, University College London, said Antarctica seems disconnected from our daily lives as it is so remote.

‘Beyond a certain threshold of warming, massive loss over time will be inevitable and irreversible. We have known this for a while,’ Rapley said.

‘Even so, the results presented in the paper – and especially the video showing the way in which the ice sheet will disintegrate – are truly shocking.’

He said humanity is transforming the planet and the level of warming humans create will determine inevitable and irreversible consequences in Antarctica.

‘The idea that we might really commit future Earth to being ice-free (with all the related consequences) is a truly profound conclusion – one which we have speculated about until now – but which this work, if correct, shows to be real.’

Published in Nature, the researchers state the only way Antarctica could recover and forestall the sea level rise is if we return to pre-industrial processes.

But because that is not feasible or realistic, the hope is that we keep temperatures below 3.6F higher than normal to at least stop things getting worse.

Anders Levermann, researcher at PIK, said: ‘Antarctica is basically our ultimate heritage from an earlier time in Earth’s history.’

‘It’s been around for roughly 34 million years. Now our simulations show that once it’s melted, it does not regrow to its initial state even if temperatures eventually drop.

‘Indeed, temperatures would have to go back to pre-industrial levels to allow its full recovery – a highly unlikely scenario. What we lose of Antarctica now, is lost forever.’ 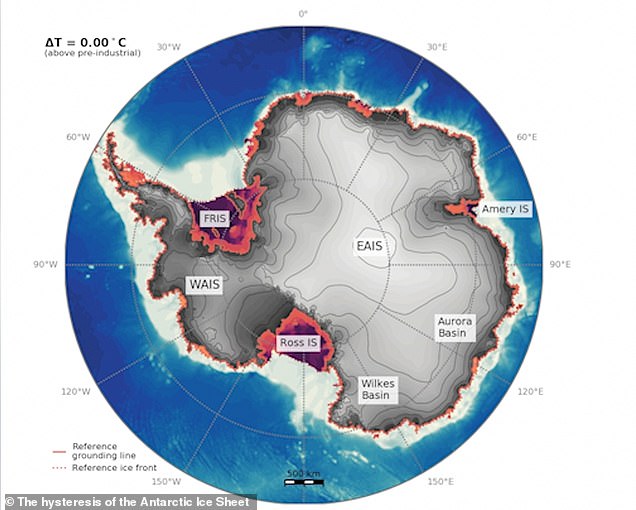 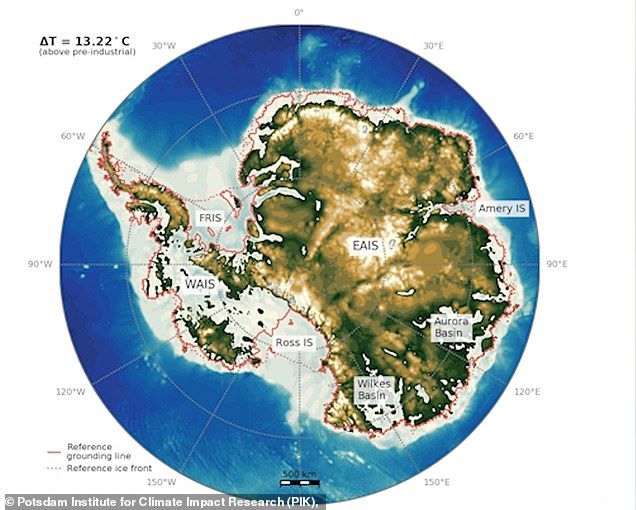 These images show changes in continental ice cover in Antarctica from the current situation of near blanket cover (left) to an almost green continent (right) if temperatures rise by 23.8F

Co-author Torsten Albrecht said the animation shows how there are different impacts on some parts of Antarctica and difference causes of ice loss.

He said: ‘In West Antarctica for instance, the main driver of ice loss is warm ocean water leading to higher melting underneath the ice shelves, which in turn can destabilise the grounded ice sheet.

‘That makes glaciers the size of Florida slide into the ocean.

‘Once temperatures cross the threshold of six degrees above pre-industrial levels, effects from the ice surface become more dominant.

‘As the gigantic mountains of ice slowly sink to lower heights where the air is warmer, this leads to more melt at the ice surface – just as we observe in Greenland.’

Professor Winkelmann said: ‘In the end, it is our burning of coal and oil that determines ongoing and future greenhouse-gas emissions and therefore, if and when critical temperature thresholds in Antarctica are crossed. 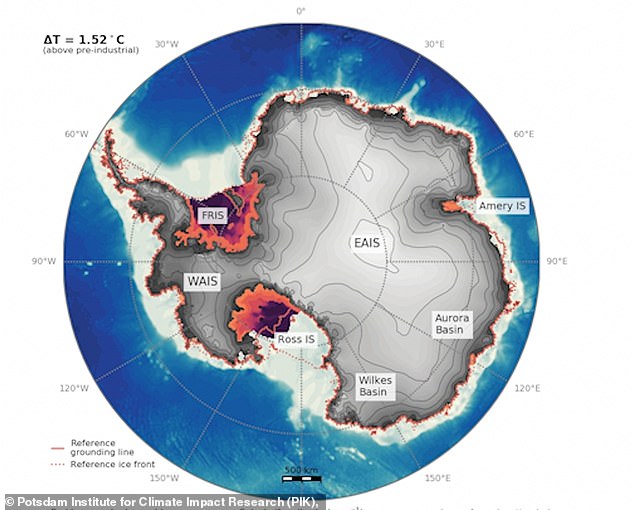 If humanity works together to reduce greenhouse gas emissions and keep global temperatures from rising by more than 2.7F (the current goal) then most of Antarctica will remain ice covered

‘And even if the ice loss happens on long time scales, the respective carbon dioxide levels can already be reached in the near future,’ Winkelmann said.

‘We decide now whether we manage to halt the warming. Antarctica’s fate really lies in our hands – and with it that of our cities and cultural sites across the globe.’

Authors say this study is ‘another exclamation mark’ behind the importance of the Paris climate agreement to keep global temperatures below 3.6 degrees F.

Winkelmann ‘If we give up the Paris Agreement, we give up Hamburg, Tokyo and New York’, as well as cultural sites like the Sydney Opera House.

We are already on track to hit the UN ‘worst case scenario’ for global ice sheet melting, according to a study by the University of Leeds.

Mass loss from 2007 to 2017 due to melt-water and crumbling ice has matched Intergovernmental Panel for Climate Change’s (IPCC) most extreme forecasts. 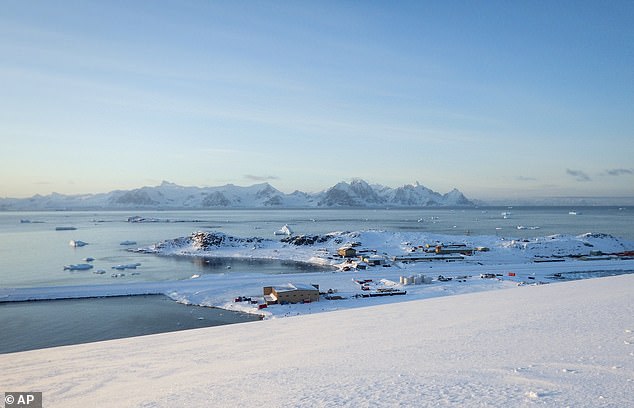 This is the Rothera research station in Antarctica. Authors say this study is ‘another exclamation mark’ behind the importance of the Paris climate agreement to keep global temperatures below 3.6 degrees F.

Thomas Slater, an expert in polar observations, said ‘we need a new worst case scenario’, adding that the sheets were melting faster than predicted.

Dr Robert Larter, Marine Geoscientist, British Antarctic Survey said at present most ice is lost by calving of icebergs and by melting at the base of glaciers where they flow out over the ocean as ‘ice shelves’.

‘As temperatures increase it is clear that the extent of surface melting will also increase. Apart from being a direct addition to the ice losses, increased surface melt is also expected to trigger a set of feedback effects,’ Larter said.

‘Eventually it will impact the stability of ice shelves, compromising or eliminating their buttressing effect on the glaciers flowing into them and thus allowing those glaciers to flow faster and deliver more ice to the ocean.

‘Where surface melt drains through a glacier to its bed it can also lubricate sliding of the ice over its bed, further increasing the glacier flow rate.’

The findings of the study linking temperature to Antarctica ice sheet levels have been published in the journal Nature.