Divorcing naked gardeners forced to drop price of their magnificent Grade I listed mansion to £2.8m

A naturist couple who are selling their historic home as they are getting divorced have been forced to drop the asking price by almost £500,000.

Ian Pollard, a property developer, and his wife Barbara, a former model, gained notoriety as the so-called naked gardeners after they bought Abbey House in Malmesbury, Wiltshire, from a group of nuns and transformed the grounds into their own ‘Garden of Eden’.

They even opened the 3.8 acre estate to the public with ‘clothing optional’ days.

Speaking at the time Mrs Pollard said: ‘There’s nothing wrong with nakedness. People get mixed up with nakedness and sex. Just because I’m naked doesn’t mean I want sex.’

Ian and Barbara Pollard (pictured front) have been forced to drop the asking price of their historic home by almost £500,000 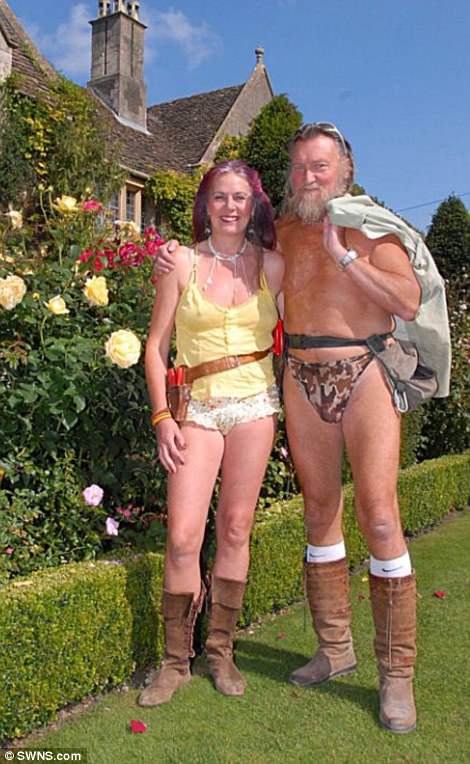 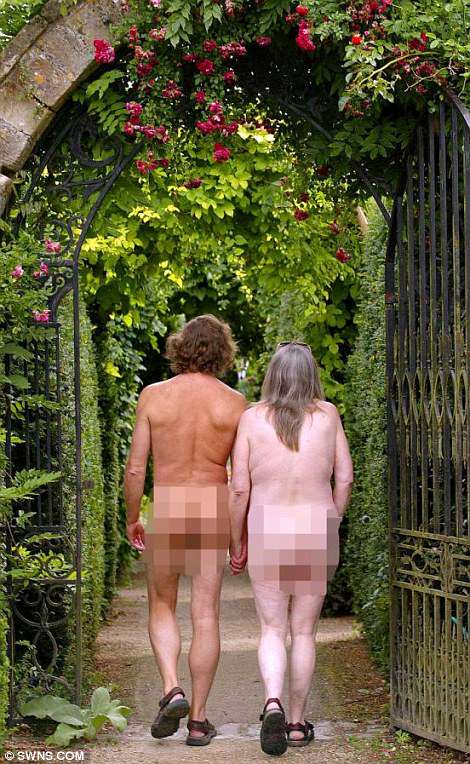 Ian Pollard, a property developer, and his wife Barbara, a former model, gained notoriety as the so-called naked gardeners 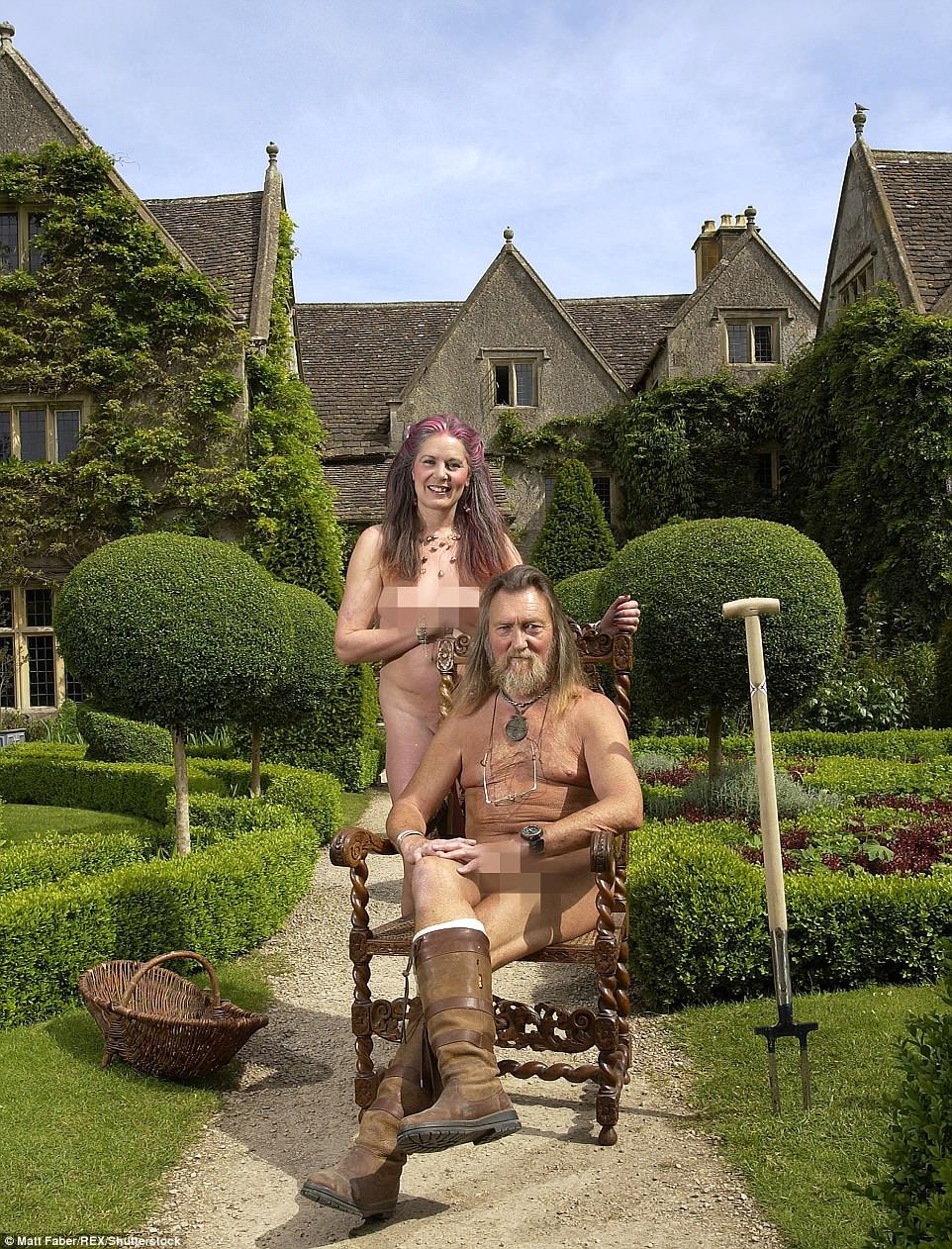 The couple bought Abbey House in Malmesbury, Wiltshire, from a group of nuns and transformed the grounds into their own ‘Garden of Eden’

In 2014 Mrs Pollard filed for divorce and they put the house on the market for £3.5m. It has now been reduced for a second time with a new asking price of £2.8m.

Located in Malmesbury — reputed to be England’s oldest borough — adjacent to the abbey, Grade I-listed Abbey House was once part of a Benedictine monastery founded at the end of the 7th century.

Athelstan — Alfred the Great’s grandson — died in 939 AD and was buried at Malmesbury Abbey, next door. 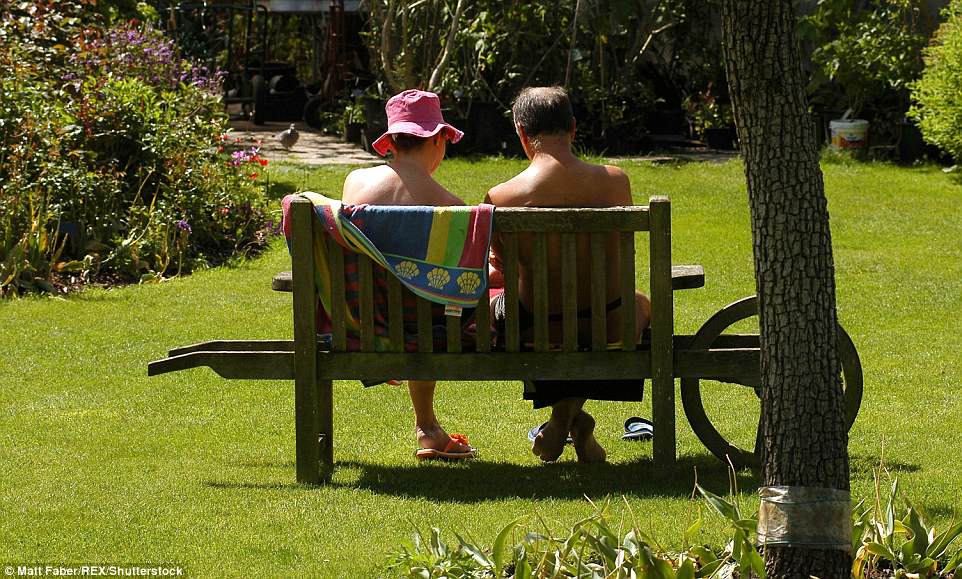 They bought picturesque Abbey House from a group of nuns in 1994 and spent four years transforming the home and gardens, before opening the grounds to the public

In the cellar is the spectacular Abbots Hall, the oldest room in the house, which is believed to have been built by Abbott William Colerne between 1260-1296 and is half the size of what would have been the original Great Hall. It features springs of an early English rib vault and octagonal columns.

On the ground floor there is also the Belvedere, a room with bi-folding doors opening to a large decked terrace.

The grounds are split into an area of formal gardens with yew tree hedging and a river garden with fishponds, waterfalls, mill races and a bridge beside the River Avon.

The sale also includes the Cloister Gardens, 0.7 acres around Malmesbury Abbey, which is let to the town council on a long lease. 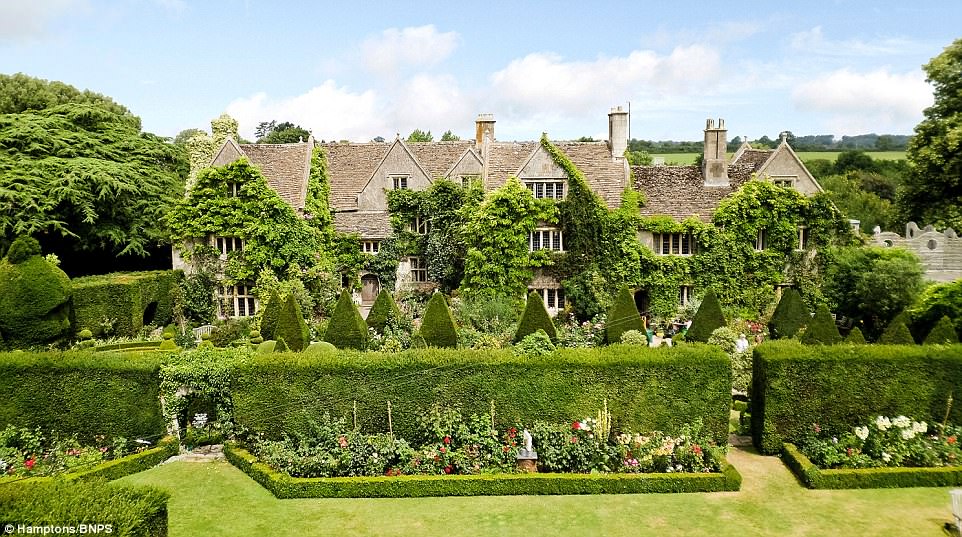 The couple bought Abbey House from a group of nuns in 1994 and spent four years transforming the home and gardens, before opening the grounds to the public 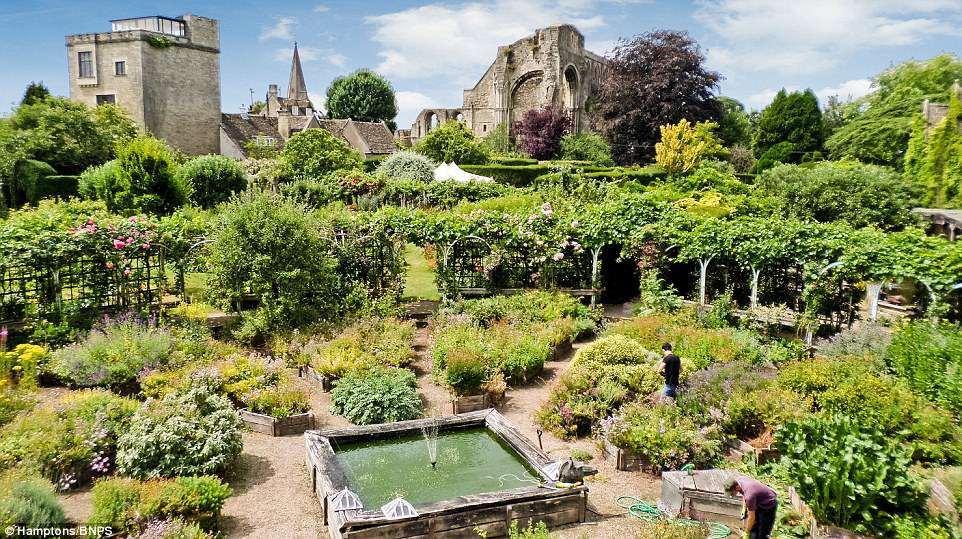 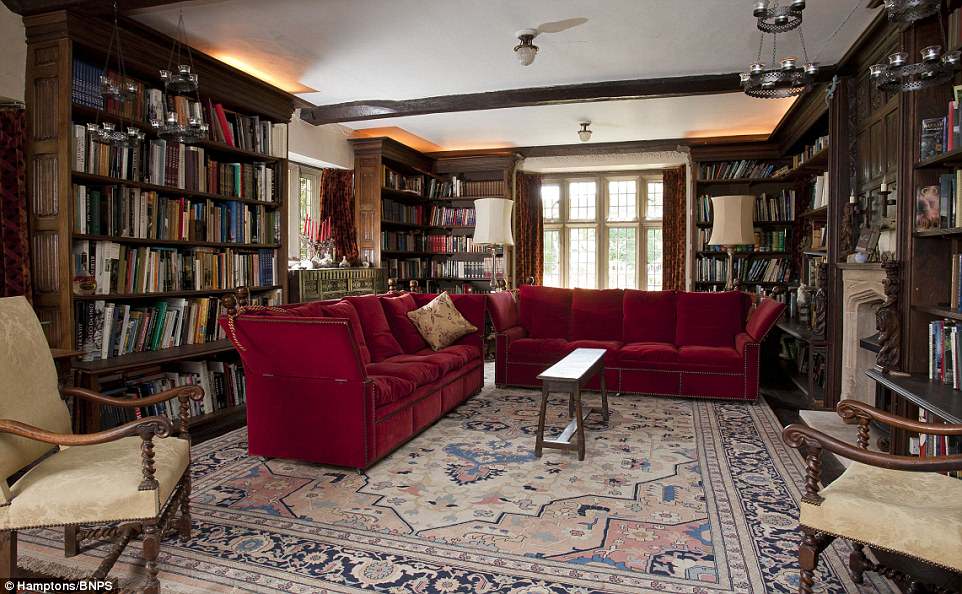 Adam Lock, from estate agents Hamptons, said: ‘It’s a proper English house and the history to it is absolutely incredible.

‘It’s very hidden and discrete within Malmesbury and you get an enormous amount of land for a property in the centre of a market town.

‘The house has a massive amount of history to it, it’s Grade I listed and has history dating back to medieval times. The owners have really maintained it so the historical features are all on show.

‘The owners have done a lot to the gardens, they are internationally known for it. 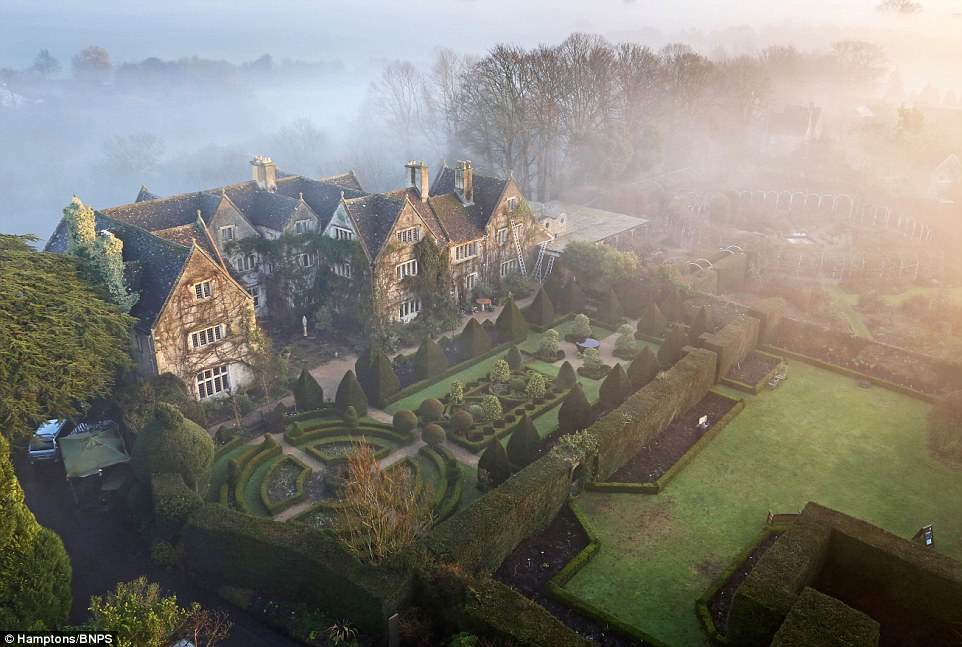 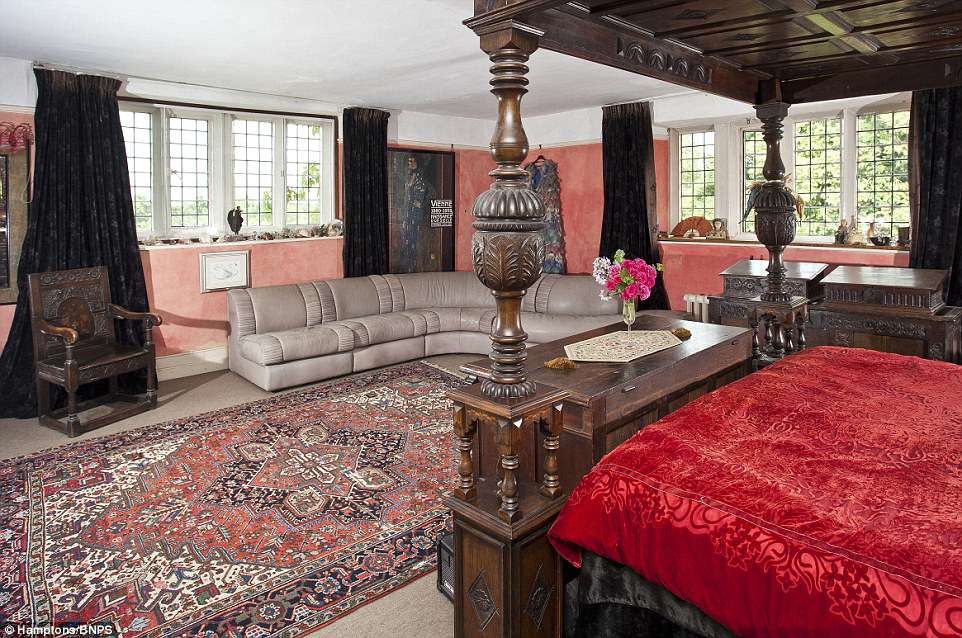 One of the bedrooms inside the sprawling property that is now available to buy for £2.8m after the asking price was dropped 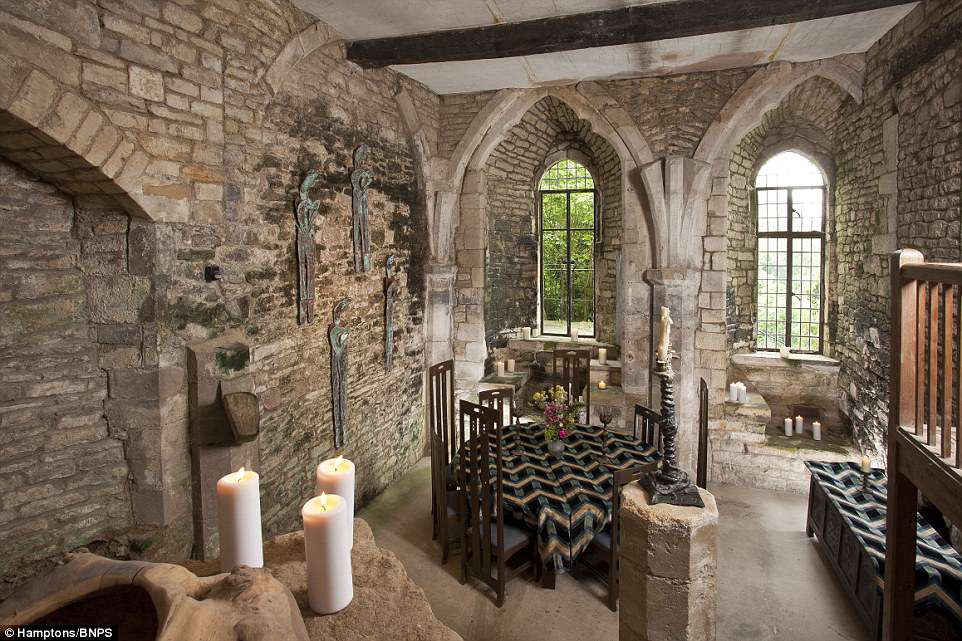 ‘At the moment it is still open to the public through the summer season but there is no contract or obligation to do that, the buyer could return it to just being a private garden.

‘It has been on the market with other agents before, but we have just launched it, it is quite a specialist market.

‘I would expect it to go to a family that want a big, discreet house. The gardens are completely private and not overlooked but they set it up so it is manageable.

‘It has very strong links to the Abbey, which you can see from the grounds. They actually own the gardens that surround the Abbey but lease those to the council.

‘They have had weddings there, so there is revenue potential for buyers.

‘There’s nothing else like it that I have ever seen.’