Researchers have long thought that being able to recognize faces is innate in humans and other primates, and that something in our brains just knows how to do this from birth.

By 200 days of age, macaques form clusters of neurons responsible for recognizing faces in the superior temporal sulcus (red)

But a new brain imaging study suggests otherwise – macaques need to have been exposed to faces from a young age to be able to recognize faces.

The first one, the control group, had a typical upbringing, spending time in early infancy with their mothers and then with other juvenile macaques and human handlers.

The other groups of macaques grew up raised by humans who bottle-fed them, played with and cuddles them – while the humans worse welding masks.

This group of macaques didn’t see a face for the first year of their lives – human or otherwise. 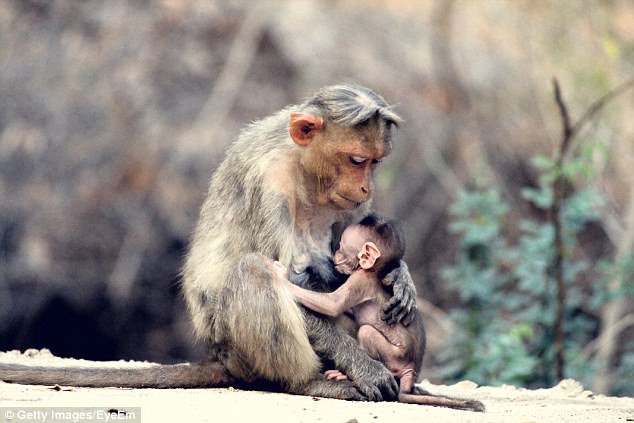 Researchers have long thought that being able to recognize faces is innate in humans and other primates, and that something in our brains just knows how to do this from birth. But a new brain imaging study suggests otherwise

After they were raised in this way, both groups of macaques were put in social groups with fellow macaques and allowed to see both human and primate faces.

When both groups of macaques were 200 days old, the researchers used functional magnetic resonance imaging (fMRI) to look at brain images measuring the presence of facial recognition patches and other specialized areas, including those responsible for recognizing hands, objects, scenes and bodies.

The macaques who were raised seeing faces had consistent ‘recognition’ areas in their brains for each of the categories, but those who grew up never seeing faces had developed areas of the brain associated with all categories except faces.