Do YOU have asthma? Stay indoors!

Asthma UK said it is ‘deeply concerned’ about the Saharan dust the fearsome storm has collected as it begins to strike to the UK.

The charity has urged the 5.4 million UK asthma sufferers to avoid going outside when the sun appears eerily red and the sky glows yellow. 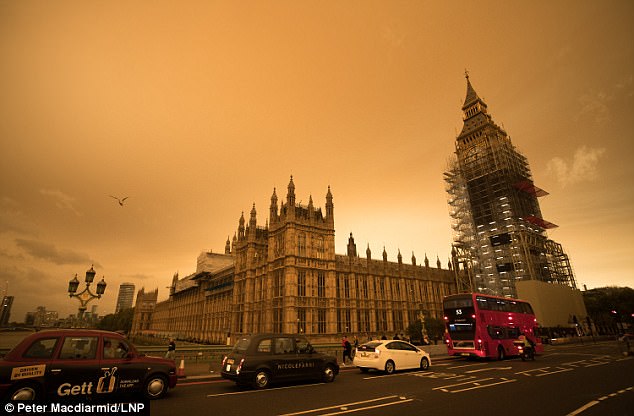 Sonia Munde, head of the helpline at Asthma UK, said: ‘We are deeply concerned about the toxic air from Saharan dust that Hurricane Ophelia has churned up.

‘This could pose a severe risk for the 5.4million people in the UK who have asthma.

‘Winds picking up dust and particles in the air could trigger potentially fatal asthma attacks.

‘We urge anyone with severe asthma to check weather forecasts and stay indoors where possible.’

Asthma UK warned that during a similar dust storm in April 2014, a third of people had suffered an asthma attack.

And 84 per cent were forced to use their blue inhaler – the one designed to relieve their symptoms, more than usual.

Experts are predicting that Ophelia could be the worst storm in 56 years, following its brutal arrival into Ireland this morning.

Two people have been killed so far, as a woman in her 50s was struck by a falling tree while driving, and a man in his 30s died trying to remove a fallen tree.

Almost 120,000 homes have lost power, trees have been flattened and roofs ripped off buildings. Gusts of up to 97mph have been recorded.

Schools in Ireland shut early, flights were grounded and bridges were shut amid fears that flooding could hit parts of western England and Wales today.

Troops were placed on standby in Ireland and many public services closed amid fears about the impact of winds.

The remnants of Ophelia, which was previously classified as a hurricane as it made its way across the Atlantic Ocean, are resulting in ‘exceptional’ weather.

Hurricane Ophelia has brought an eerie red sun to parts of England and Scotland as a blanket of orange cloud swept in.

The storm is believed to have picked up dust from the Sahara and debris from forest fires in Spain and Portugal as it travelled towards the UK.

This has caused the sun to appear red and has created an atmospheric orange glow. Reports of the red sun have been made in Bristol, Devon and Cornwall.

While it may seem rather daunting, Helen Chivers, a meteorologist at the Met Office told MailOnline that it’s a fairly normal phenomenon.

Why is the sky golden and sun red?

She explained the distinctive colour was a result of the hurricane originating as a hurricane in the Azores, before it moved northwards over the Sahara.

Ms Chivers, who said the unsettling skies ‘won’t last long’, said: ‘The red sun and golden sky are partly due to Storm Ophelia.

‘You’ll have noticed how warm it’s been over the last few days, and this is because Ophelia has pulled warm air up from the Azores in Africa.

‘The southerly winds that come with Ophelia have come up from Africa, picking up dust particles on their travels.

‘The winds have also picked up smoke from wildfires over southern Portugal.

‘All of that has come over the UK, and what we’re seeing is the effect of the sunlight being scattered by the dusk and smoke particles from Sahara wildfires.’

Has it caused a strange smell?

Hurricane Ophelia was also blamed for bringing a bizarre phenomenon when it smashed into the British Isles on Monday today – a strange smell.

People in Cornwall reported a smell of burning candles or incense, with the whiff seemingly particularly strong in coastal areas.

There were reports along the coast from Portreath to Hayle and a woman in Penzance said she could smell incense as the strong winds started to whip up around the town.