Do you see the light? Image of Christ-like figure is spotted in the sky in Argentina

Do you see the light? Image of Christ-like figure is spotted in the sky as sun bursts through the clouds in Argentina

A stunning image of a Christ-like figure has been captured bursting through the clouds over Argentina.

The photo was taken in the city of San Salvador de Jujuy and spread rapidly on social media.

Monica Aramayo used her smartphone to capture the white of the sun lighting up the sky and a figure appearing with his arms outstretched.

Monica Aramayo used her smartphone to capture the striking image in the clouds of San Salvador de Jejuy, Argentina

Others said it looked like the famous Christ the Redeemer statue in Rio de Janeiro, Brazil.

Not only is the ‘head’ of the figure clear in the image but a cassock which the saviour was thought to wear appears to flow down to the ground below.

Others said the ‘head’ even appeared to be adorned with a crown of thorns associated with the Crucifixion of Jesus. 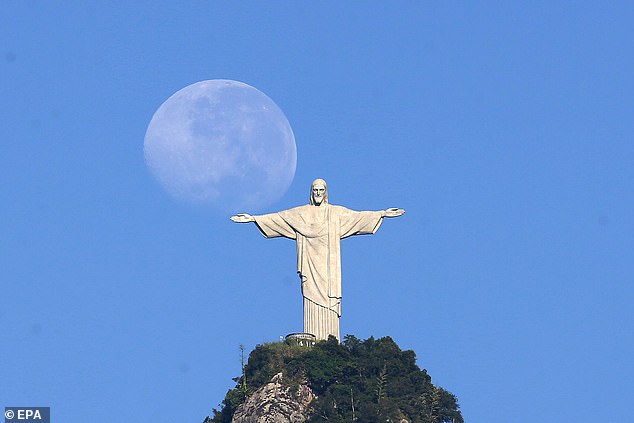 The figure has been compared to the iconic Christ the Redeemer statue in Rio de Janeiro, Brazil

Social media user Mariela Romano commented: ‘The Lord will soon come for us all and we should be ready.’

Carlos Daniel Nieva remarked: ‘Thanks for the image that allows us to keep on our path and have a better hope for tomorrow.’

While Romina Salinas wrote: ‘If Jesus came back, he would make us all disappear because we are worth nothing. I personally only see the sun coming through the clouds, but people see what they want to see.’