Do YOU think ill Brits should wear face masks on public transport? Vote here and tell us why…

Do YOU think ill Brits should wear face masks on public transport? Vote here and tell us why…

Do YOU think ill people should wear face masks on public transport?

Scots who have a cold should wear face coverings on public transport to ease pressure on the health service, Nicola Sturgeon said today.

The SNP leader, who held a pandemic-style press briefing in Edinburgh on the NHS winter crisis, admitted hospitals were nearly full amid a surge in Covid and flu cases.

She said all over-12s should wear masks on trains and buses, stay at home where possible if they have a cough or cold and take ‘basic’ precautions, such as washing their hands more frequently.

Similar advice was issued for all Britons last week, with health chiefs urging ill people to stay home from school and work and wear a mask if they have to venture out.

Ms Sturgeon said the country is battling ‘extraordinary’ levels of winter flu, while Covid hospitalisations had doubled in a month and there has been a surge in Strep A. She conceded that for some health workers the situation might feel even worse that at stages during Covid.

MailOnline app users can vote in the poll by clicking here.

Ms Sturgeon said all over-12s should wear masks on trains and buses, stay at home where possible if they have a cough or cold and take ‘basic’ precautions, such as washing their hands more frequently 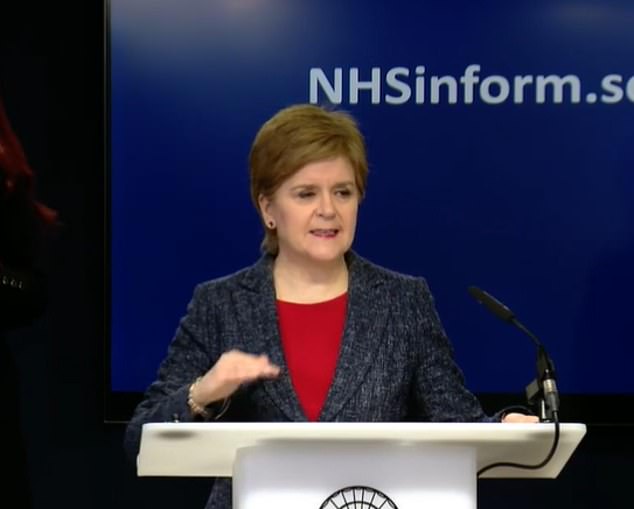 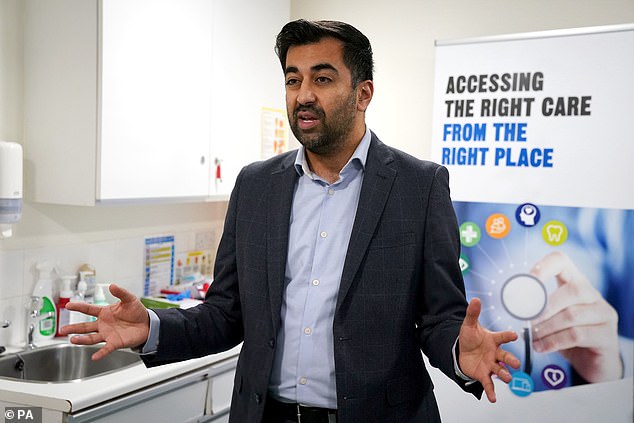 Ms Sturgeon said the advice is an attempt to reduce hospitalisations.

Staffing for the NHS 24 helpline will also be boosted, while GP surgeries will open on Saturday to boost capacity.

Under an intense grilling, Ms Sturgeon said: ‘We are facing exceptional problems that are not unique to Scotland…

‘In a relative sense NHS Scotland is dealing with these pressures in a better way.’

She added: ‘In addition to Covid, the country has been experiencing extraordinary levels of winter flu, more than 1,000 patients were admitted to hospital with flu during each of the last two weeks.

‘And finally there has also been a rising number of cases of Strep A and other respiratory viruses resulting in a significant demand for services.

‘So, the impact of this combination of Covid, flu and Strep A is clear in the statistics measuring demand for health services.’

SNP health spokesman Humza Yousaf admitted yesterday that the health service north of the border is in turmoil, with warnings that record A&E waits and delayed discharge numbers are costing patients their lives.

A poll has suggested Scots want the SNP to focus on the NHS chaos and cost-of-living issues rather than efforts to force an independence referendum.

Meanwhile, Ms Sturgeon is facing a huge row over her plans to loosen gender identity rules in Scotland, reducing age limits and removing the need for a medical diagnosis.

Top medicine expert accuses Harry of ‘wishful thinking’ after Prince claimed psychedelic drugs like ayahuasca and shrooms can ease pain of loss, grief and trauma… but can they REALLY work?