Doctor, 51, pleads not guilty to raping a married patient, 26

Doctor, 51, pleads not guilty to raping a married patient, 26, ‘after she complained about being fat and not having sex with her husband often’

A Brisbane doctor indecently touched and raped a female patient who complained she was fat and didn’t have sex with her husband often, a court has heard.

Ramin Harirchian, 51, pleaded not guilty in the Brisbane District Court on Monday to the rape and sexual assault of a 26-year-old patient at the Chermside family medical centre in October 2018.

‘They discussed the purpose of her visit and she said she had been feeling ill and had diarrhoea,’ prosecutor Mark Whitbread said in his opening address.

Ramin Harirchian (pictured outside court on Monday), 51, pleaded not guilty in the Brisbane District Court on Monday to the rape and sexual assault of a 26-year-old patient at the Chermside family medical centre in October 2018

‘She explained she had been on weight loss shakes and described herself to the defendant as fat.’

Harirchian then instructed the woman to show him her body before telling her she looked sexy, he said.

‘He tapped her on her left breast then asked: “How often do you have sex with your husband?”,’ Mr Whitbread said.

‘Her response was something along the lines of: “Not very much”.’

He then allegedly advised his patient she should have sex every day as he had done when he was younger.

The woman was then instructed to remove the rest of her clothes as Harirchian continued to give her weight-loss advice, Mr Whitbread said. 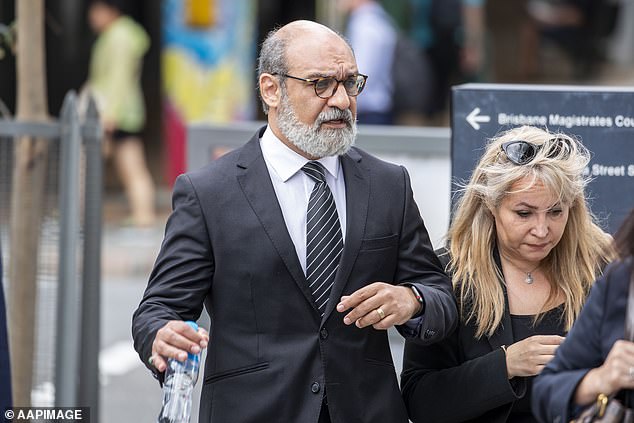 Harirchian (pictured outside court on Monday) instructed the woman to show him her body before telling her she looked sexy, the court heard

He then indecently touched the now-naked woman before digitally raping her.

‘He touched her breasts and vagina area,’ Mr Whitbread said.

‘At this stage, she recalls the defendant saying: ‘I want to lick you’.’

Mr Whitbread said the woman then pulled away saying she was married, but it didn’t stop Harirchian, who then invited the woman to touch his penis.

‘The patient was worried and frightened at this time,’ he said.

As she hurriedly dressed, Harirchian told his now distressed patient it was just a joke, Mr Whitbread said.

The court heard that after leaving the surgery, the woman called her husband before walking to a nearby police station to report the rape.

The trial continues with the court closed to hear evidence from the woman.