Doctor, 59, who showed naked pictures of himself to 11 patients faces losing his license

Doctor, 59, who showed naked pictures of himself to 11 patients and three colleagues faces losing his license after telling them: ‘I’ve seen yours, now you’ve seen mine’

A doctor who showed naked pictures of himself to 11 patients and three colleagues faces losing his licence after telling two of them: ‘I’ve seen yours, now you’ve seen mine’.

Dr. Nigel Mark Phipps, from Ontario, Canada, also touched at least one patient in a sexual manner and made remarks of a sexual nature to others, the discipline committee of the College of Physicians and Surgeons of Ontario found last year.

He is understood to have shown the images to long term female patients under the guise of talking about a golf trip he had taken years earlier.

The committee said family physician Phipps became sexually aroused after showing the photos to two of the patients, The National Post reports.

Another patient alleged he showed her a photo of his genitals, asking her: ‘Ain’t I well endowed for a man my age.’

The medical regulator in Canada is now looking to revoke his medical licence after a discipline committee found his behavior ‘rose well above the level of unacceptable into disgraceful, dishonorable and unprofessional conduct’.

The committee wrote: ‘Boundaries in a physician’s workplace are essential so as to provide an atmosphere of safety and respect for all.

‘They help control and address issues of workplace harassment, workplace safety, and power imbalance in settings that are often fast-paced, intense, and stressful.

Lawyer Elizabeth Widner asked Wednesday that the committee to impose the most severe penalty available.

She said Phipps’ actions were not a momentary lapse of judgment. Instead she argued that went for weeks, affecting several patients. 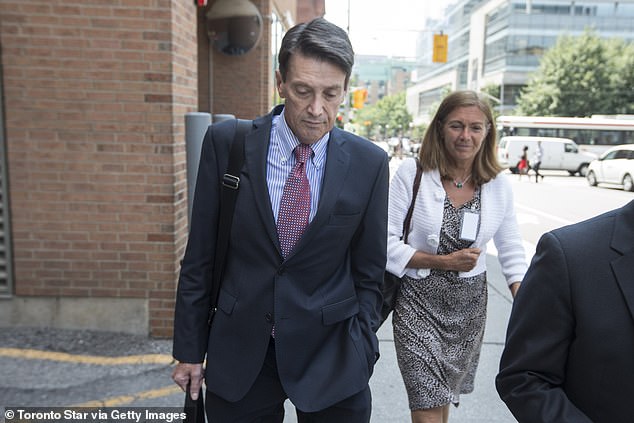 The medical regulator is looking to revoke the family physician’ s medical licence after a discipline committee found his behavior ‘rose well above the level of unacceptable into disgraceful, dishonorable and unprofessional conduct’

One of his victims had already been dealing with serious physical or emotional issues, Widner said.

But lawyers defending Phipps say he was suffering from depression at the time of the incidents in 2014 and asked that he be suspended from practicing medicine for more than a year.

Widner argued: ‘The causal link is not there.’

The doctor had been charged last year, but the case was put on hold while he sought medical treatment himself.

The college is also asking Phipps to pay more than $16,000 for each patient, as well as more than $15,000 to cover costs of proceedings.