Doctor shares post that reveals a day as a stretched GP

A TV doctor has shared an ‘eye-opening’ post on social media that reveals a single day working as an over-stretched GP – as she hit out at the 10-minute GP consultation period.

Dr Zoe Williams, who regularly appears on This Morning to dish out health advice, explained some of the complex cases she had to deal with in the allocated time slot.

Recent research has highlighted the 10-minute consultation in Britain is among the shortest in Europe.

Dr Williams told her Instagram followers about three people she saw – all immigrants and victims of violence, rape, torture or poverty – who she said showed ‘the warmest gratitude’ for their NHS care.

She added two of the three needed telephone interpreters before she could help them in her post that offered a glimpse of ‘what normal life is really like for so many’.

It comes after it emerged that Britons on average are seen for just 9 minutes and 22 seconds by their GP.

It has also been reported that one third of family doctors plan to close their surgeries to new patients, according to a survey released earlier this week.

GP surgeries are under huge strain as a result of an aging population as well as immigration – but Dr Williams said the main problem is that general practice is underfunded.

ONE THIRD OF GPS PLAN TO CLOSE DOORS TO NEW PATIENTS

Dr Williams’ post comes as it emerged earlier this week that one third of family doctors plan to close their surgeries to new patients.

They claim that without drastic action they will be unable to give safe care to those already on their books.

One in ten GPs said they had already closed surgery lists to new patients temporarily within the past 12 months.

A further 28 per cent – nearly a third – said they were considering doing so.

GP surgeries are under huge strain from the ageing population – with many more patients having complex illnesses – as well as immigration.

They are also in the grip of a recruitment crisis, with an exodus of doctors retiring or quitting who are not being replaced by young trainees.

Doctors’ leaders say the only way surgeries can cope with the pressure is to refuse to accept new patients.

NHS guidelines forbid GPs from closing their lists unless they have been granted special approval from their local health board.

Figures from NHS England show that 145 surgeries were given permission in 2016/17, although a total of 231 surgeries had applied.

But a survey of 500 ‘partner’ GPs suggests hundreds of others are closing their lists informally, without approval.

According to the poll by Pulse, a website for GPs, 9 per cent had temporarily stopped accepting new patients in 2016/17, with or without permission.

If the findings are representative for the 7,700 surgeries in England, then almost 700 closed their lists.

Another 28 per cent of partner GPs said they were considering closing their lists. Some said they were taking legal advice on whether to defy NHS England’s orders to remain open.

’10-minute consultations not fit for purpose’

Dr Williams explains in her post how the 10 minute she has for patient is inadequate to deal with the problems she encounters.

She also mentions a man, originally from war-torn African country, who is suffering post traumatic stress after being beaten in London by a gang for ‘absolutely no reason’.

Another patient she saw was a young woman who was a victim of rape and torture, who was recently discharged from hospital following a suicide attempt. She says she now ‘faces a closed door at every job interview’.

Dr Williams says she was forced to pay for letters from her GP to get proof of ID and added that ‘She got her letter today and didn’t pay today! #rogueGP’.

She wrote: ‘All 3 if (sic) these people are immigrants to this country. 2 if (sic) the 3 required a telephone interpreter as we don’t speak the and (sic) language – which adds yet another barrier to them receiving optimal care.

‘All 3 of these people showed the warmest gratitude for the short amount of time that I spent with them. I only wished I could have helped more.

‘This is why I will never switch to being a private doctor. 10 minute consultations in GP are not fit for purpose.

‘General Practice is underfunded and under appreciated but still the best job. #bekind’

One person commented: ‘It scares me that the “system” seems to be trying to stamp out empathy and compassion. I’m amazed that people can be so unaffected by the suffering of others. But posts like this restore my faith in humanity.’

Another doctor wrote: ‘There are so many days like this when I don’t pick up a stethoscope – helping patients cope with their mental health, life traumas and to navigate the stresses of the world we live in is such an important part of what we do.’

A study published last month found that British patients see their family doctor for less time than patients in the USA, Sweden, Canada, Spain and Japan.

Patients in Lithuania, Belgium and Portugal all have longer visits to their doctors than Britons, according to the study by Cambridge University, which appeared in BMJ Open.

It will take 70 years before the NHS achieves 15 minute appointments, it was suggested.

The British Medical Association has previously called for 15 minute appointments, arguing it is impossible to make a thorough diagnosis in less time. But if current trends continue, that target will not be reached until 2086.

The research looked at 67 countries for which data was available and discovered that 28 had longer consultations than Britain.

The average appointment varied from just 48 seconds in Bangladesh to 22.5 minutes in Sweden.

Those in Belgium, Lithuania, Luxembourg, Portugal, Iceland, Cyprus and Peru currently enjoy 15 minute consultations, a third longer than in the UK. 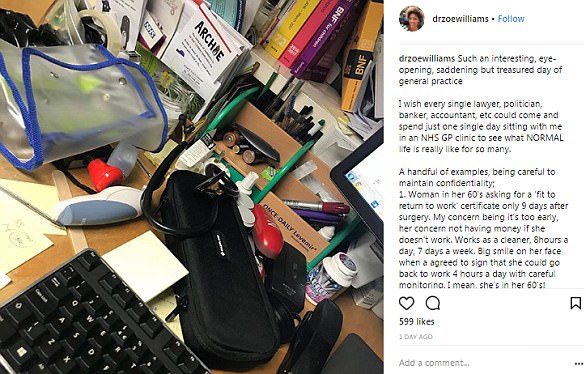 Such an interesting, eye-opening, saddening but treasured day of general practice

I wish every single lawyer, politician, banker, accountant, etc could come and spend just one single day sitting with me in an NHS GP clinic to see what NORMAL life is really like for so many.

A handful of examples, being careful to maintain confidentiality;

1. Woman in her 60’s asking for a ‘fit to return to work’ certificate only 9 days after surgery. My concern being it’s too early, her concern not having money if she doesn’t work. Works as a cleaner, 8hours a day, 7 days a week. Big smile on her face when a agreed to sign that she could go back to work 4 hours a day with careful monitoring. I mean, she’s in her 60’s!

2. Man, originally from war-torn African country. Having problems linked to post traumatic stress because was assaulted and beaten, in London, by bunch of complete strangers for absolutely no reason. This has brought back memories of the war time atrocities he experienced earlier in life which he had previously managed to cope with. WTF is wrong with people.

3. Young woman recently discharged from hospital following suicide attempt. Unable to cope due to inability to sleep. Inability to sleep as nightmares of torture and rape that she suffered previously. Trying to get on with life but facing a closed door at every job interview, and even being made to pay for letters from GP to get proof of ID. She got her letter today and didn’t pay today! #rogueGP

All 3 if these people are immigrants to this country. 2 if the 3 required a telephone interpreter as we don’t speak the and language – which adds yet another barrier to them receiving optimal care.

All 3 of these people showed the warmest gratitude for the short amount of time that I spent with them. I only wished I could have helped more. This is why I will never switch to being a private doctor.

10 minute consultations in GP are not fit for purpose.

General Practice is underfunded and under appreciated but still the best job. Yes it’s hard work, yes I ran an hour late. But I feel truly privileged to get to spend a snippet of time with these people and show them some much needed kIndness. #bekind