Doctor warns of the rise in cases of ‘selfie wrist’

Taking too many selfies could leave you with a painful nerve condition, a California doctor is warning.

The digital age’s latest hazard has been dubbed ‘selfie wrist’, a numbing and tingling sensation experienced in the wrist and fingers.

Dr Levi Harrison, an orthopedic surgeon based in San Francisco, told KABC News he is seeing a rise in patients with the condition, which he describes as a form of carpal tunnel syndrome.

Even Kim Kardashian revealed this September that her doctors had diagnosed her with ‘selfie wrist’.

Dr Harrison says that as photo-editing technologies and apps become more accessible, the number of cases will increase, particularly among young women and teenage girls, who are the targets of these products.

Dr Levi Harrison, an orthopedic surgeon based in San Francisco, says he is seeing a growing number of patients with ‘selfie wrist’, a numbing and tingling sensation experienced in the wrist and fingers (file image)

‘It’s a form of carpal tunnel,’ Dr Harrison told KABC. ‘What happens is the nerve becomes inflamed and angry.’

The median nerve spans from the forearm to the palm of the hand – and runs through a narrow passage in the wrist known as the carpal tunnel.

Dr Harrison said hyper-flexing the wrist inwards can cause a tingling sensation or even a sharp pain.

Kim Kardashian, who published an entire book of selfies, revealed in a June interview with ITV’s This Morning that she wasn’t taking them anymore because she ‘doesn’t really like them’.

But on a September episode of Keeping Up with the Kardashians, the 38-year-old reality star admitted her doctors ordered her to stop taking them because she had developed carpal tunnel syndrome.

However, unlike Dr Harrison, Kardashian’s doctors said her ‘selfie wrist’ was from holding her cellphone for too long without moving.

Dr Leon Benson, a hand surgeon at the Illinois Bone and Joint Institute, told Yahoo Lifestyle, that he agreed with this explanation.

‘Your elbow is not designed to be flexed for an hour at a time,’ he said.

‘Movement is life, and your body is designed to be moved around. Even when you sleep and you’re unconscious, your brain has a way of making you move around periodically so you don’t stay in one position all night.’

In 2017, the Irish Medical Journal published a paper of four case reports of patients who were diagnosed with ‘selfie wrist’.

However, in each of those cases, an injury occurred to the selfie-taker, such as a 13-year-old girl who fractured her wrist after she attempted to take a selfie while jumping on a trampoline.

The authors of the paper blamed the injuries on a lack of spacial awareness and proprioception, which is a sense of the position and movements of the body.

Dr Harrison says holding your cellphone without too much bend in the wrist or using a selfie stick can ease the pain. 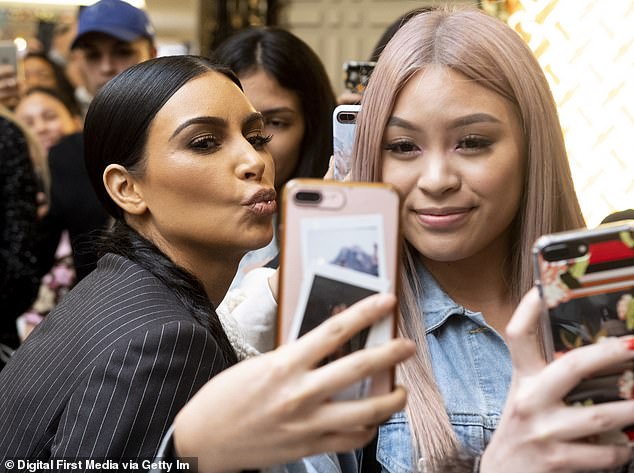 Kim Kardashian revealed on an episode of Keeping Up with the Kardashians that her doctors ordered her to stop taking selfies because she had developed carpal tunnel syndrome. Pictured: Kim, left, takes a selfie with a fan in Costa Mesa, California, on December 4

He also recommends exercises including rotating the wrist with an open palm and a closed fist and waving the hand back and forth.

But the obsessive need to capture the perfect picture at any moment can cause more than just wrist problems.

An August 2018 paper from Boston Medical Centers said selfie filters were driving teen girls to plastic surgery by making them hyperfocused on their appearance despite the fact that photo apps create false sense of reality.

A July 2018 study from the All India Institute of Medical Sciences in New Dehli, India, found that more than 250 people worldwide died taking selfies between October 2011 and November 2017.

The highest number of deaths was reported in India followed by Russia, the US and Pakistan, respectively.