Victims of the tainted blood scandal were labelled ‘drug addicts or secret alcoholics’ as doctors tried to cover up the role of the NHS, an inquiry heard yesterday.

Around 30,000 patients were said to have been given unsafe blood products in the 1970s and 1980s, exposing them to hepatitis C and HIV. Some 3,000 are thought to have since died.

At the second day of the public inquiry’s preliminary hearings, chairman Sir Brian Langstaff was repeatedly told medical records of those affected had been ‘destroyed or redacted’.

Liz Hooper lost two husbands – her ‘first love’ and then her ‘soulmate’ – to the infected blood scandal.

The 53-year-old married haemophiliac Jeremy Foyle after they met at a village disco as teenagers.

Mr Foyle was a talented salesman and his work allowed the couple to have a comfortable living. But Mr Foyle’s blood condition made much of life a struggle.

He relied on a coagulant to stem the bleeds, and by the time he found out about his exposure to hepatitis C, the damage had already been done. 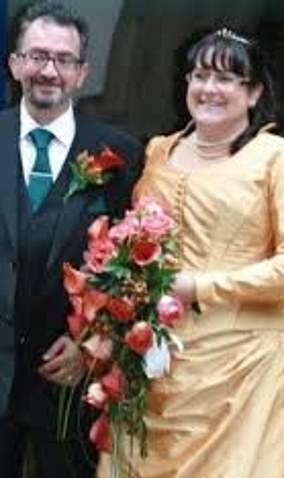 In December 2008, Mr Foyle was taken to hospital after suffering a bleed at home but then developed a further bleed and suffered a cardiac arrest. Hepatitis C was recorded as the official cause of death. He was 43. Mrs Hooper, a mother from Warwickshire, later met Paul Hooper on the internet and they married in 2011.

Mr Hooper, a former civil servant had told his wife that due to his haemophilia he had been infected with both hepatitis C and HIV. Last December, the 53-year-old lost his health battle.

According to campaign group Tainted Blood, Mr Hooper is one of more than 70 victims who have died since Theresa May announced the inquiry.

‘They were both fantastic men… who deserved their lives, they didn’t deserve what they had done to them,’ Mrs Hooper told the BBC.

‘I had my first love and I had my soulmate. They’ll always be with me.’

Sir Brian was urged by lawyers and individual victims to expose an alleged cover-up at a Department of Health steeped in a ‘culture of losing records’.

David Lock, QC, acting for 241 of those affected, emphasised that many victims had been accused of ‘drug use, alcoholism or sexual promiscuity’, with the NHS apparently desperate to wash its hands of any responsibility.

And Sam Stein QC, for four core participants, suggested criminal offences of grievous bodily harm, murder and conspiracy to murder could have been committed. Mr Stein added: ‘It is clear that those responsible for the criminal infection of people through the supply of contaminated blood should be prosecuted. Those people who wiped out thousands of haemophiliacs and other people should pay for their crimes.’

Karon Monaghan QC, representing another four key participants, said they believed there was ‘clearly a cover-up’ and demanded the Government produce a schedule of what documentation had been destroyed, and why.

The shredding of potentially key evidence was initially blamed on an ‘inexperienced member of staff’, but the true extent of the loss of evidence has never been properly examined.

Departmental papers, apparently relating to ‘the extent to which ministers were made fully aware of the facts’ during the 1970s were also destroyed.

Mr Lock added: ‘We understand that there are reports that the private papers of the former Secretary of State, Dr David Owen, [now Lord Owen] were part of this destruction exercise.’

He repeated a previous assertion that Department of Health paperwork was apparently destroyed ‘with intent, in order to draw a line under this disaster’. The TV broadcaster and author Lord Winston has previously called the scandal ‘the worst treatment disaster in the history of the NHS’.

Many of the infected products, often used for treating haemophilia or haemorrhages, were derived from the blood of drug addicts, prostitutes and convicts from the US.

Besides doctored medical records and inaccurate death certificates, many victims believe government officials deliberately destroyed evidence relating to groups like the Advisory Committee on the Virological Safety of Blood.

He said that when victims sought treatment, they were ‘stigmatised by healthcare professionals, blamed for their conditions, accused of being drug addicts or secret alcoholics’.

Mr O’Neill added: ‘Their medical records during their lives and sometimes their death certificates baselessly recorded and maintained these false accusations, based on ill-founded assumptions and prejudice and ignorance.

‘They asserted that the patients were themselves to blame.

‘Such records did not acknowledge that the state had caused these conditions by its own reckless and abusive conduct.

Lloyd Williams, QC, for 107 victims, also questioned the role of Lord Owen – health minister in 1974 – who pushed for Britain to start producing its own blood products. The inquiry was asked to investigate what ‘made him so concerned regarding the contamination of [blood products] purchased from America that he directed that measures should be put in place to become self-sufficient within five years’.