Doctors have removed a six-inch ice pick from a man’s back after he was attacked on the street by a stranger.

Rakesh Kumar, 27, from Delhi, was allegedly walking to the bus station on his way to work when he was randomly stabbed in the back by a passer-by.

The pick pierced his left lung, leaving Mr Kumar fighting for his life.

After an hour-long operation on November 17 involving five surgeons and a week in hospital, Mr Kumar is recovering at home but has no idea who attacked him.

Mr Kumar said: ‘I’ve got no personal fight with anyone. I have no idea why anyone would do this to me’. 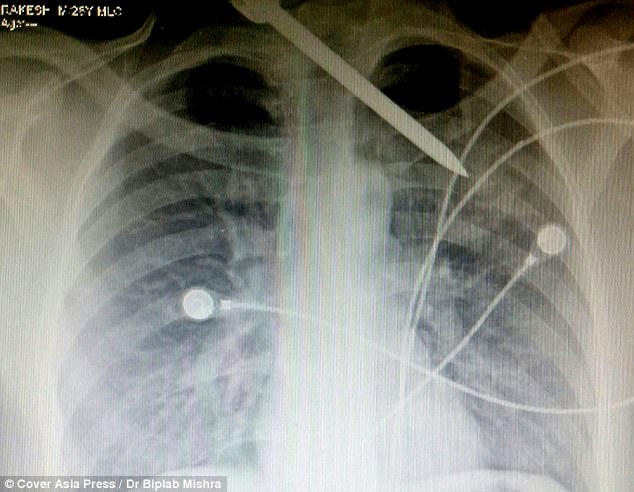 An X-ray shows how the pick punctured Mr Kumar’s left lung, leaving him fighting for his life 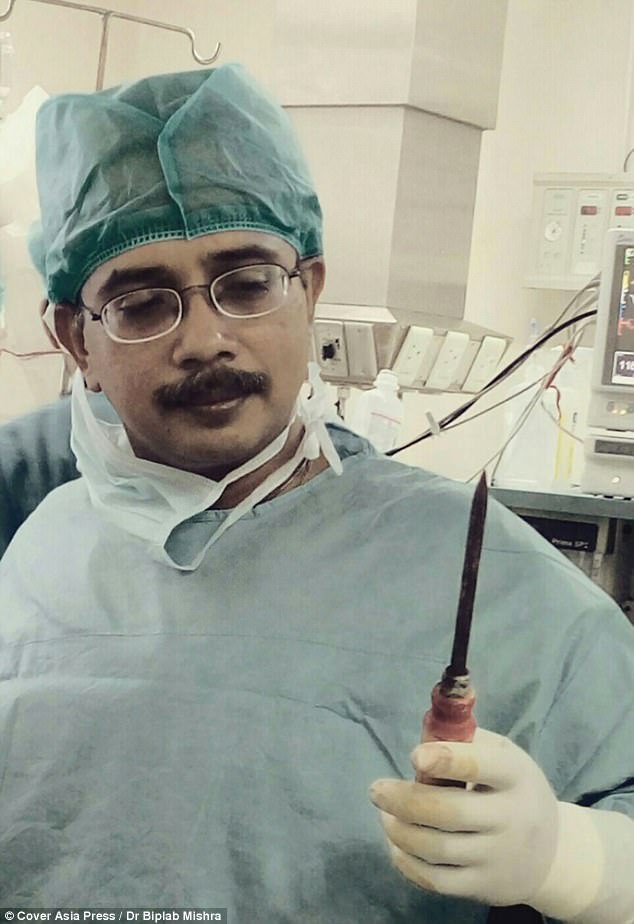 WHAT ARE THE DANGERS OF A PUNCTURED LUNG?

A punctured lung is a serious condition that most commonly occurs after trauma or injury, such as knife or bullet wounds, as well as rib fractures.

Such injuries prevent lungs from properly absorbing oxygen, which can be fatal.

Lungs can also become inflamed, which prevents them from filling with oxygen.

Symptoms include chest pain, particularly when breathing; difficulty breathing or swallowing; dizziness; and coughing up blood.

‘I was screaming in pain’

Mr Kumar said: ‘It was around 8am and I was heading for office. I was walking to get the bus, when someone just stabbed me from behind and left me.

‘I remember the pain, I was screaming in pain and people rushed forward to help me.

‘I didn’t see the attacker, he fled. People helped me into a rickshaw and I rushed home which was only a few minutes away before my family rushed me to hospital.’

Mr Kumar was taken to Action Balaji Hospital, in Paschim Vihar, before being referred to the All India Medical Institute of Medical Sciences hospital (AIIMS); one of India’s largest government hospitals.

Dr Biplab Mishra, professor of surgery, AIIMS’ trauma centre, said: ‘He had scans at the previous hospital but they could not do much to help him.

‘As soon as he was admitted here he was immediately taken to the procedure room. We decided to operate on him by following a procedure called Video-Assisted Thoracoscopic Surgery.

‘The ice pick had pierced his left lung and we could not just pull out the foreign object as it would cause heavy bleeding so a proper surgical procedure was required to remove the ice pick.’ 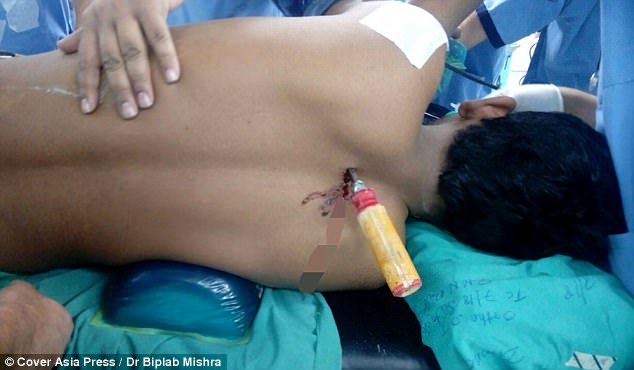 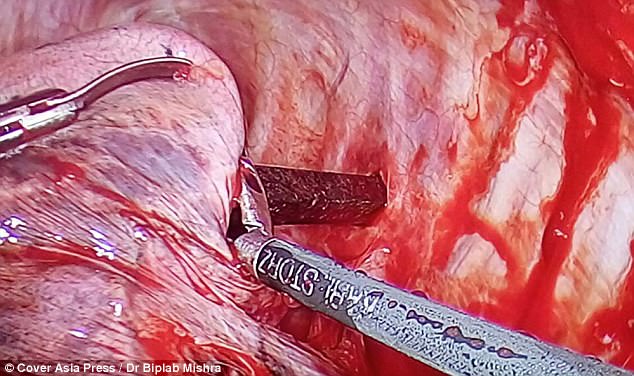 Image shows how deep into his back the pick went; requiring special equipment to remove

‘He is lucky to be alive’

A team of five doctors, headed by Dr Biplab, removed the ice pick in an hour-long surgery.

Dr Biplab said: ‘We made three small incisions through which we inserted a small camera. With the help of the camera we pulled out the ice pick.

‘The ice pick had a six-inch metallic part, which was embedded in his upper middle chest, piercing his left lung. He needed expert attention and is lucky to be alive.’

Mr Kumar was kept under observation for one week to ensure he did not develop pneumonia or other lung infections but has now been discharged from hospital and is home.

He has no idea who attacked him and is worried about walking the streets again.

‘I’ve got no personal fight with anyone’

Mr Kumar said: ‘I’m lucky to still be here. I was bleeding badly and it was hurting a lot.

‘I’ve got no personal fight with anyone. I have no idea why anyone would do this to me but I hope the accused is caught and I get a chance to understand why they attacked me like this.’

Sub-Inspector Pravesh Kaushik, from Madipur Police Station, said: ‘A case has been registered with us under Section 307 (attempt to murder) of the Indian Penal Code.

‘The boy was attacked by an anonymous person and he claimed he does not have any rivalry with anyone.

‘Eye witnesses claim the attacker had hidden his face under a black mask and immediately fled from the spot. There is no CCTV footage of the incident either so the investigation is difficult; however, a search is on and we are trying to find the criminal at the earliest.’