In a letter published in the British Medical Journal, three public health experts questioned why ministers chose to create a new system when a ‘straightforward’ one already existed.

Professor Allyson Pollock and Dr Peter Roderick of Newcastle University, and Professor Alison Macfarlane of City, University of London, admitted they were concerned by ‘failings in this parallel system’.

And they called for the disease control scheme in place before the crisis to be overhauled so it is ready for any potential future outbreaks.

The trio called for Public Health England – which has faced a barrage of criticism for its handling of the outbreak – to be stripped of control over regional organisations.

Instead they said contact tracing should be left in the hands of local directors of public health, who work directly with their council all the time.

Researchers said the UK’s testing and contact tracing system should be run by councils and local medical teams, not a central model based on private contractors hired by the Government (Pictured: Paramedic staff carrying out swab tests in Bristol)

The experts wrote: ‘The abysmal response of the government to the epidemic has served to underline the need to rebuild and reintegrate a strong local communicable disease control system.’

They called the notification system – the way officials handle reports of the disease – ‘inadequate’ and said it ‘seems to have been mishandled from the beginning’.

Their paper said it took a month for the government to include Covid-19 in its surveillance system – with the virus being recognised as a threat on February 10 but only added to the system on March 5.

And the medics said many suspected cases of Covid-19, the disease caused by the SARS-CoV-2 virus, ‘will have been missed’ as a result of the oversight.

And the system did also not require either GPs or Public Health England to re;port suspected cases of the disease to local councils, instead operating a centralised system where doctors went straight to PHE.

Professor Pollock, Dr Roderick and Professor Macfarlane were also concerned that outsourced private testing services have been given the bulk of government business.

Fewer than half of people referred to NHS Test and Trace after testing positive for coronavirus have given any details of their close contacts, shocking data revealed today.

In its report this week, the Department of Health said the people who were unable to give contact details were ones who had only come into contact with complete strangers, such as on the bus.

The staggering number suggests that an app – which automatically links people’s phones so it can alert people who don’t know one another – may be necessary for contact tracing to work perfectly. 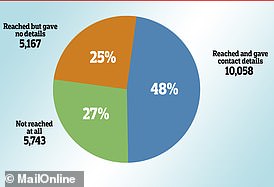 From the infected people who have been successfully contacted themselves, two thirds of them were able to give details of one or more close contacts.

Between June 17 and the system’s launch at the start of the month, 15,225 confirmed coronavirus patients have been successfully reached by contact tracers.

But more than one in three – 5,167 people – were ‘not able’ to give details of a single person they may have come into close contact with. A further 5,062 people who tested positive could not be reached at all by contact tracers – who phone, text and email someone 10 times a day to get hold of them.

Today’s update revealed that a total of 134,893 people – people who have tested positive, and their contacts – have been in touch with NHS Test and Trace in three weeks.

One scientist said the statistics today were ‘worrying’ and could only be solved with better co-operation from the public – not by the Government.

Serco — a scandal-hit firm of the centre of the government’s contact tracing efforts — has already been forced to apologise for handing accidentally sharing the email addresses of 300 recruits.

The medics warned that private firms have ‘no clear public health standards’ and added: ‘There is also a lack of clarity on where the results are being sent.

‘It is unclear what happens to many test results. Several hundred thousand tests are reported not to have been linked to NHS records, missing confirmed cases.’

The Test and Trace system, also run by private contractors, has been hit by claims it is poorly managed, with employees revealing they worked for weeks with nothing to do.

Insiders said the operating system used did not work properly and they had to repeat training as a result, while some were left sat in queues of more than 300 people waiting for technical help.

It today emerged that a quarter of all 21,000 people referred to NHS Test and Trace have not successfully been reached by contact tracers.

And of those who have, only two thirds gave useful details of contacts – just half of all the people who have tested positive since the service began in early June.

‘It is staggering that hundreds of people are not submitting their details into the system in the first place. Surely that should be one simple thing that can be fixed,’ he said.

‘Ministers need to level with the public about how they are going to tackle these real and serious issues as a matter of urgency.’

But they argued that the system — which involves GPs, the NHS and local public health officers — has ‘gradually been eroded over several decades’.

In the letter they said: ‘Erosion began after NHS reorganisation in 1974 and continued when the Public Health Laboratory Service Board was abolished in 2003.’

‘In 2012, the Health and Social Care Act abolished locally based bodies in England and carved public health functions out of the NHS.

‘Public Health England was set up as an executive agency to fulfil the government’s duty to protect the public from disease, with only nine laboratories and eight regional centres.’

And instead of rebuilding the system, which the researchers said has been ‘weakened’, the government has made a new one which steers patients away from the traditional proven methods.

They said local GP surgeries should take back control of assessing patients’ symptoms, and that contact tracing and testing should be managed by local councils.

This infectious disease control should be ingrained into existing medical facilities, the researchers said, which have permanent staff and the ability merge it into routine.

Professor Paul Hunter, an infectious disease specialist at the University of East Anglia, was not involved with the research but said: ‘The lack of an integrated system of management of infectious disease notification and contact tracing for Covid-19 will hinder our ability to cope with the second wave.

‘If we do have a second wave, which seems likely, we will sadly have more deaths and yet more impact on our economy and society.’

Dr Bharat Pankhania, of the University of Exeter, added: ‘Time is of the essence and it is important to take heed and immediately change course, engage with local experts, and have a much more robust approach to testing, contact tracing an outbreak management.’