Doctors removed 100 pieces of metal from a man’s stomach

A 52-year-old French man with psychosis who repeatedly ate sharp objects had to have masses of metal removed from his stomach after it began puncturing the organ.

The man, whose case was published in the journal BMJ Case Reports, had spent years swallowing metal tools because of his psychiatric disorder.

Eventually the pieces joined together inside his body, forming clumps called bezoars, which can be formed anywhere in the digestive tract, including the stomach.

The man went to the emergency room five times in five years because he was vomiting blood and experiencing intense pain as a result of the bezoars in his stomach.

He has undergone five operations during which nails, screws, knives, nuts, a screwdriver head, spoon handles, pebbles, a washer, iron wire and coins were removed from his abdomen. 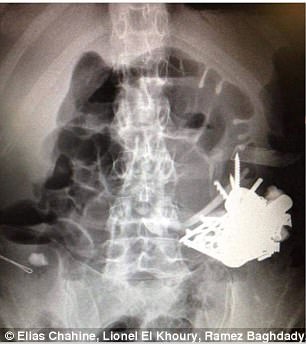 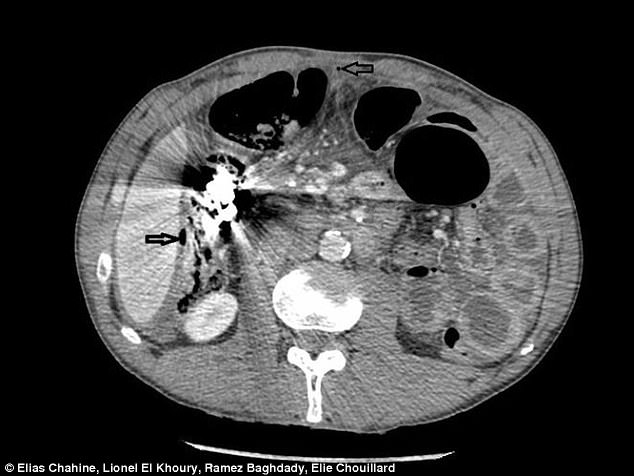 Pictured is the patient’s abdomen. An arrow on the left is pointing to a sharp object the man had swallowed

Psychosis is a mental disorder that causes patients to lose touch with reality.

It renders people incapable of determining what is real and what is fake.

Doctors prescribe some medications as well as therapy to patients who display symptoms of psychosis.

Antipsychotic drugs can be taken in the form of pills, shots or liquids.

Patients who have psychosis who are thought to be capable of harming themselves or others are frequently hospitalized.

Cognitive behavioral therapy helps some patients recognize when they are likely to be affected by their psychosis.

Additionally, a form of treatment called supportive psychotherapy helps people who live with the disorder function and it emphasizes healthy ways to think.

Despite receiving psychiatric treatment, the man, from France, who had to have bezoars removed swallowed inedible objects over a number of years.

He first went to the hospital in May 2012, and showed signs of gastric outlet obstruction, which led doctors to remove a bezoar endoscopically.

Eight months later the patient was admitted to the hospital for the same reason. He was then operated on surgically, as doctors found traces of knives nails and other sharp objects in his stomach.

He visited the hospital three more times between 2013 and 2016, and was operated on each time.

Bezoars are solid masses of accumulated material that cannot be broken down in the digestive tract.

The masses are usually formed in one’s stomach, in the small or, rarely, large intestine, and both children and adults can develop them. Certain people are at a higher risk than others for developing a bezoar.

Those who have had gastric surgery, breathe with the help of a ventilator, or who have diabetes or kidney disease have higher chances of having one of the masses form in their stomach. 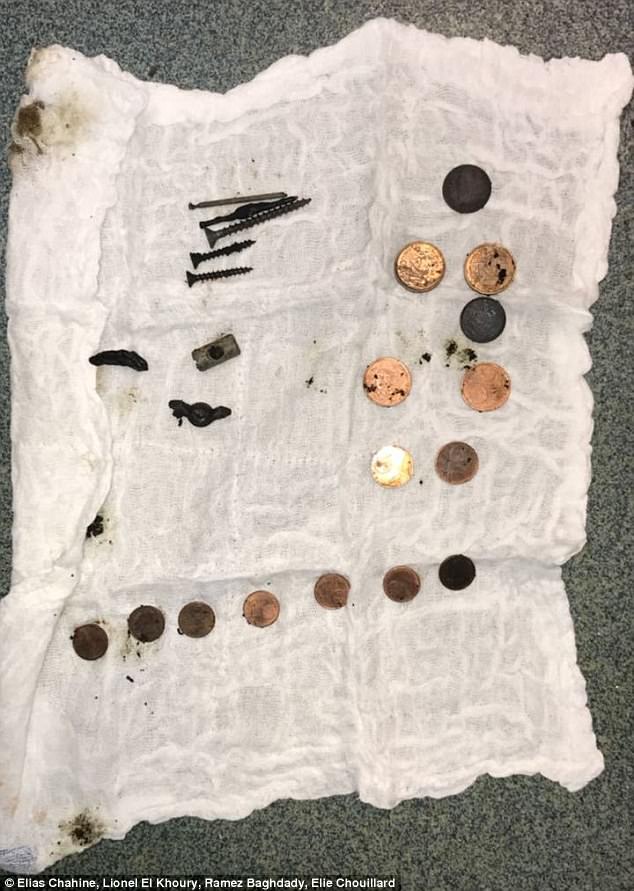 These coins and nails were removed from the patient, who has difficulty distinguishing between what is real and what is fake 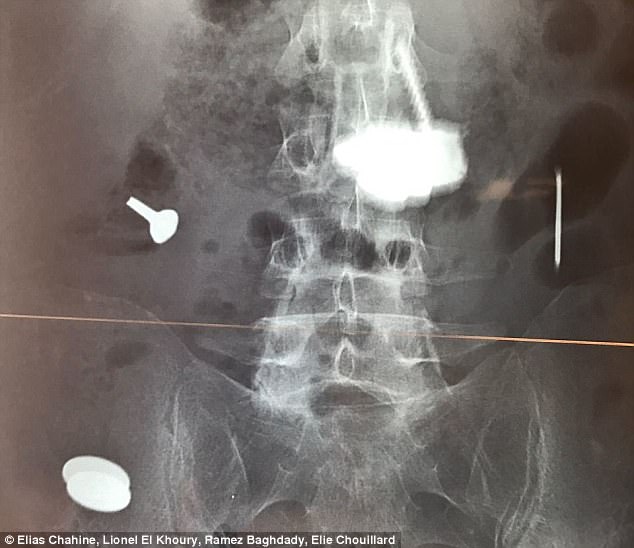 The masses that formed in the patient’s stomach are called bezoars, and doctors had to remove them endoscopically and surgically

People whose chances are higher are advised to reduce their consumption of cellulose that cannot be digested to lessen their risks.

Bezoars are common among people with developmental disabilities or psychiatric disorders, as they frequently swallow inedible objects.

The masses can cause people to lose their appetites as well as vomiting, nausea, weight loss, gastric ulcers, intestinal obstruction and intestinal bleeding. They can eventually kill tissue in the digestive tract.

While small bezoars can be dissolved using medications, large ones are often surgically removed.

Bezoars, which can consist of food as well as other objects, can induce a condition called gastroparesis, which is a result of malfunctioning or damaged stomach nerves.

Gastroparesis can cause food that you have swallowed to come back up your throat.