Trainee paediatrician Hadiza Bawa-Garba (pictured) made a series of mistakes that led to the death of Jack Adcock, 6

Thousands of doctors have signed a letter protesting against the decision to strike off a doctor whose mistakes led a six-year-old boy to die from sepsis.

Jack Adcock, who had Down’s syndrome and a heart condition, died after trainee paediatrician Hadiza Bawa-Garba marked him ‘do not resuscitate’ because she had confused him with another patient.

The doctor was convicted of manslaughter through gross negligence in 2015 but was suspended from practising for just 12 months, which the General Medical Council appealed against.

In the run-up to the appeal, around 800 doctors signed a letter supporting her. It was claimed she was being shielded by her peers after doctors last year said the pursuit of Bawa-Garba was ‘perpetuating an injustice’ against her.

Last week, despite their protestations, the initial decision by the Medical Practitioners Tribunal Service not to strike Bawa-Garba off, but to give her a year’s suspension instead, was overturned.

However, 7,500 doctors have now signed a further petition, with the signatures collected over 24 hours following the overturned decision claiming it could put doctors off admitting mistakes in future.

Bawa-Garba made a catalogue of errors leading up to Jack’s death at Leicester Royal Infirmary in 2011. She had wrongly diagnosed him with gastroenteritis, when he had sepsis. She took three hours to examine X-rays revealing he had a chest infection, and then ignored blood tests showing signs of kidney problems. 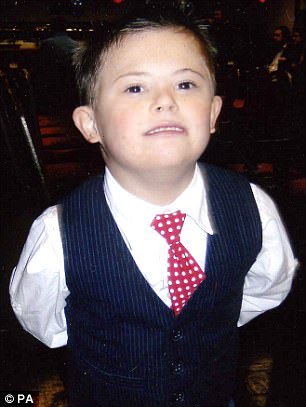 Jack Adcock, 6, died of sepsis after the trainee doctor mistakenly marked him as ‘do not resuscitate’

Bawa-Garba also failed to make it clear in his notes he should not be given a drug which lowers blood pressure and is unsuitable for people in septic shock. When he suffered a septic shock, leading to a ‘crash call’ for doctors to revive him, Jack was mixed up with a discharged patient who had a ‘do not resuscitate’ instruction on his notes – and the resuscitation was called off.

Jack’s mother, Nicola Adcock, said last month she was ‘disgusted that doctors are all sticking together’. The six-year-old’s family believe Bawa-Garba has never shown any remorse for the death. But the new letter signed by doctors across the UK defends the 40-year-old paediatrician and expresses ‘deep-seated concerns’ about the consequences of her conviction and striking off.

It states: ‘The use against Dr Bawa-Garba of her recorded reflections on this event in a legal process will frighten doctors of all grades away from honest self-appraisal. In one move, this undoes years of positive cultural change within medical training.’

The doctors’ letter added: ‘Dr Bawa-Garba made mistakes, but to properly learn from these they must be viewed in the context in which she was working.

‘If we allow Jack Adcock’s death to be explained by the culpability of a single individual we can only lessen our chances of preventing a similar death in the future.’

However, Charlie Massey, chief executive of the GMC, defended its decision. He said: ‘It is really important that we differentiate between this case, where a doctor was convicted of gross negligence manslaughter, and everyday mistakes.’