A Minnesota mom went partially blind as a result of mercury poisoning after being exposed to the heavy metal in face cream.

An official report found the unnamed patient had been using certain brands that had exceptionally high levels of the toxic metal – even though this was not disclosed on the labels.

The Somalian woman initially reached out to poisoning experts when she began experiencing a range of symptoms that interfered with her daily life, including insomnia, leg pain, muscle weakness, and fatigue.

The woman reported her symptoms, including gradual loss of her peripheral vision, to a range of doctors.

Unable to diagnose her, doctors referred the woman to a team of toxicologists headed up by Dr Erin Batdorff with the Minnesota Poison Control System. Dr Batdorff ran a series of blood and urine tests that yielded shocking results.

A test conducted at a home visit in 2022 revealed that the woman’s mercury level had soared to 46.6 micrograms/liter, over nine times the level considered normal (5 micrograms/liter).

It was clear at that point that the woman had suffered mercury poisoning. She had also inadvertently put her family at risk.

Elevated levels of the heavy metal were also detected in her home, likely due to the amounts left in the family’s washing machine after the woman laundered her clothes. Levels of up to 300 mg/m3 were found in the washing machine.

The public health authorities also detected abnormally high concentrations in the children’s rooms. The children themselves had elevated levels of mercury in their bodies as well.

Dr Batdorff’s team of toxicologists conducted two home visits a year apart to test the woman and her family for concentrations of the metal in their systems. They tested for mercury in the woman’s skin creams as well.

On the first visit, the woman showed researchers the creams she had previously used.

The mercury contents of two products were several thousand times higher than the permitted levels of 1 part per million (ppm) in cosmetics. Urine tests revealed high levels of mercury in her body – 23mcg/liter.

The following year, she had two new creams in her medicine cabinet that she had finished using, but new unopened versions of the products contained extremely high levels of mercury of 11,000 and 18,000ppm.

The woman’s vision loss was a more extreme symptom of mercury poisoning than what Dr Batdorff typically sees, which includes tingling or numbness in a patient’s hands or feet.

Severe cases of mercury poison can result in life threatening health effects including kidney failure and catastrophic damage to the central nervous system as well as infertility.

The report did not disclose which lightening creams in particular the woman had been using, though she reportedly bought at least some of them abroad. The products are also available at some major retailers including Amazon.

Different creams and cleansers contain varying formulas, but they all typically work the same way: They penetrate the skin via hair follicles and sweat glands and block the production of melanin in the skin.

Skin whitening creams are most typically used in the Somalian, Asian, and Latina communities and often escape regulatory oversight. The creams do not disclose on their labels that they contain mercury and many users do not know that their products are contaminated. 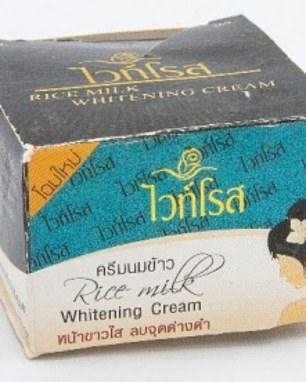 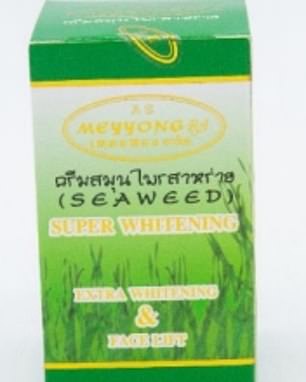 Skin lightening creams remain on major e-commerce platforms such as Amazon and eBay despite evidence that many of them contain extremely high concentrations of mercury.

WHAT IS MERCURY POISONING?

Mercury naturally builds up in fish, shellfish and animals that eat fish.

Higher levels are found in fish at the top of the food chain, including marlin, shark and swordfish.

Other sources can be dental fillings.

Too much mercury exposure can damage the brain, heart, kidneys, lungs and immune system.

If the metal is in the bloodstream of unborn babies or young children, it man harm their nervous system, making them less able to think and learn.

Symptoms of mercury posioning can include:

A healthy person’s mercury level should be less than 10ng/mL.

A single serving of halibut, lingcod or salmon shark can exceed that, according to the Alaskan Government.

Dr Erin Batdorff – who led the report, told CNN that the woman had no idea she was endangering herself and others in her household.

‘No one intentionally wants to hurt themselves or their family members. But it’s out there and you can’t see it, you can’t smell it.

‘There’s no way [for consumers] to know whether [mercury] is in the creams or not because it’s not on the labels,’ Dr Batdorff said.

Dr Batdorff added: ‘She will not recover her vision… So being a young woman that now has vision loss is really frightening and pretty concerning.’

Dr Batdorff said: ‘With inorganic mercury it’s that chronic long-term exposure that concerns me the most.

‘It’s more subtle but ends up building up in our system and is hard to eliminate, especially when it gets into the brain … and once mercury has crossed over into the brain and our nervous system, it can cause a lot of different side effects.’

None of the products disclosed that they contained mercury.

In the intervening year, the woman experienced a greater concentration of mercury in her body, the report said.

The children in her home were also susceptible to poisonous exposure.

Background mercury content below 200 nanograms per cubic meter (ng/m3) are not considered to be of particularly high concern.

The children’s rooms, however, recorded levels of up to 400 ng/m3, and their towels read up to 600 mg/m3, according to the case report.

Many skin-lightening creams sold by major e-commerce platforms like Amazon, eBay, and Alibaba have consistently been found to contain mercury, according to the consumer watchdog organization Zero Mercury Working Group.

The products are most prevalent in the Somali, Asian, and Latina communities. The woman who experienced partial blindness was originally from Somalia.

Jessica Nelson, Program Director for the Minnesota Biomonitoring program within the state health department said: ‘We need to be sure women know that products can have mercury in them.

‘And we need to focus on women who speak languages other than English and different ways of sharing the information, ideally through community partners.’

Minnesota health officials said they hope to work with local healthcare providers to bolster their efforts to better educate people who are at the greatest risk for mercury exposure.

The Food and Drug Administration lacks proper regulatory authority over cosmetics, which it can only pull from shelves until after a problem has been reported. The agency has far more regulatory power over food and medications.

And many products are able to enter the US through illegal channels despite the agency’s import alert, which allows FDA agents to detain certain products at the border.

Amira Adawe, Founder and Executive Director of the Minnesota-based Beautywell Project, which champions efforts to address the harms of skin lightening products among communities of color, urged the FDA to improve enforcement measures.

Ms Adawe said: ‘The products are widely available in ethnic malls like Karmel and the state has not actively regulated these products… I visited [a few months ago] to check if the products we tested that contained mercury are still available…and saw all the mercury containing skin-lightening products displayed on the shelves.’