Doctors told a mother-of-two who had Lyme disease dismissed her symptoms as imagined – telling her to ‘try meditation’ because she ‘didn’t look unwell’.

Katherine Wood, of Stow, Massachusetts, went out on a nature walk with her young son and his friend in November 2016 when she was bitten by a tick.

Because she didn’t have a fever, a headache, or a skin rash, the 37-year-old thought she was fine.

But over the next several months, Wood’s symptoms got worse and she saw more than a dozen specialists who either misdiagnosed her or told her they didn’t think anything was wrong.

One even told her that her symptoms were likely psychosomatic and to try meditation.

Finally, nearly a year after symptoms began, Wood was correctly diagnosed by a Lyme-literate doctor and was put on an intense regimen of oral and injectable antibiotics.

In a first-person account written for Health, Wood says she feels better than she did months ago, and encourage others to trust their gut and advocate for themselves if they feel like something is wrong.

Katherine Wood, 37 (pictured, right, with her husband), of Stow, Massachusetts, was bitten on a tick while on a nature walk in November 2016 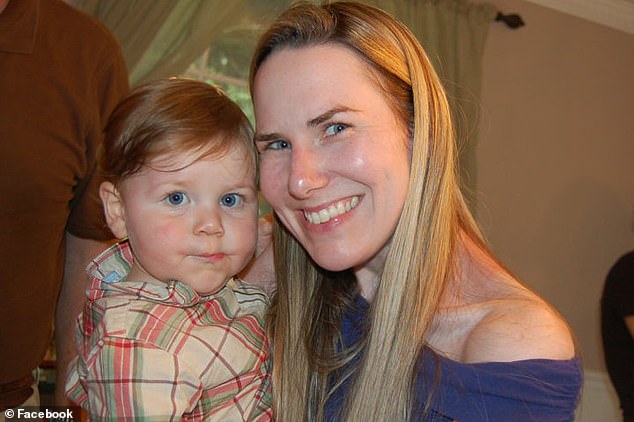 She started experiencing symptoms including shortness of breath, chest pain, neck stiffness and numbness in the hands. Pictured: Wood with one of her sons

Lyme disease is a tick-borne illness that generally causes a rash as well as joint-pain and muscle weakness. It can typically be treated by several weeks of oral antibiotics.

Wood said she didn’t even realize she’d been bitten until her husband found the tick attached to her back the day after the nature walk.

‘What I knew then about Lyme disease told me that I would develop a bulls-eye rash or flu-like symptoms if the tick actually transmitted the illness to me,’ she wrote in Health.

‘Neither of these signs appeared, so I assumed I was fine. That flawed assumption drastically changed my life.’

It wasn’t until February that Wood started experiencing symptoms such as shortness of breath and chest pain.

She was diagnosed with heartburn and given a prescription, but that didn’t work. Her primary care physician then concluded she had a virus that would naturally run its course.

Wood said her mother mentioned the tick bite from November and recommended a test for Lyme disease. The test came back negative.

‘I had no reason to doubt my doctor or the test results,’ Wood wrote. ‘With Lyme ruled out, I moved on to determine what was happening to my body.’

Over the next several months, Wood saw 13 different specialists as her chest pain worsened, her neck became stiff and her hands were always numb or tingling.

A rheumatologist told she had costochondritis, or inflammation of the cartilage that connects the rib to the breast bone. A neurologist told her she had carpal tunnel syndrome.

Wood’s primary care physician even told her that her symptoms may be psychosomatic and that she should try meditation.

‘I was beginning to feel hopeless,’ Wood wrote in Health. ‘How could I have gone from being 100 [percent] healthy to having all of

She returned to her primary care doctor’s office and asked to see the in-office infectious disease specialist who told Wood: ‘You don’t look unwell.’

Wood had yet another Lyme disease test, which also came back negative.

Her mother booked an appointment with the chief of infectious disease at a hospital in Boston.

The doctor ran a different test called a C6 Lyme ELISA that he said was more effective than the tests Wood already had done. It was positive.

She was started on a three-week course of the antibiotic doxycyclinem.

‘I soon learned that with tick-borne infections, your symptoms become much worse during treatment,’ Wood wrote. ‘When you take antibiotics, an enormous number of infectious organisms die off, which causes an inflammatory response in your body.’

Wood went to the doctor at the end of the three weeks and reported her condition, but the doctor said she had been cured and that her pain was likely due to ‘damage done by the infection’.

She found a local doctor in October who sent her blood work off for testing, which confirmed she still had the disease. 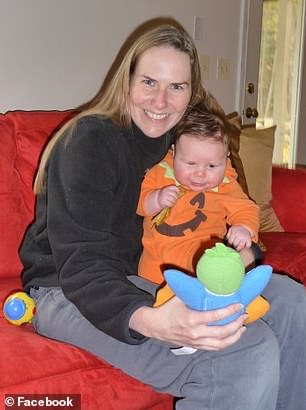 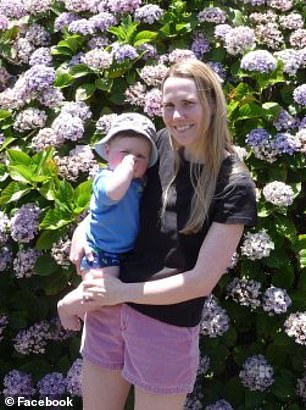 Several doctors misdiagnosed her and one doctors told her to ‘try meditation’ and that she ‘didn’t look unwell’. Wood was finally diagnosed with Lyme disease, a tick-borne illness, in July 2017 and was given a three-week antibiotic regimen. Pictured, left and right: Wood with one of her sons 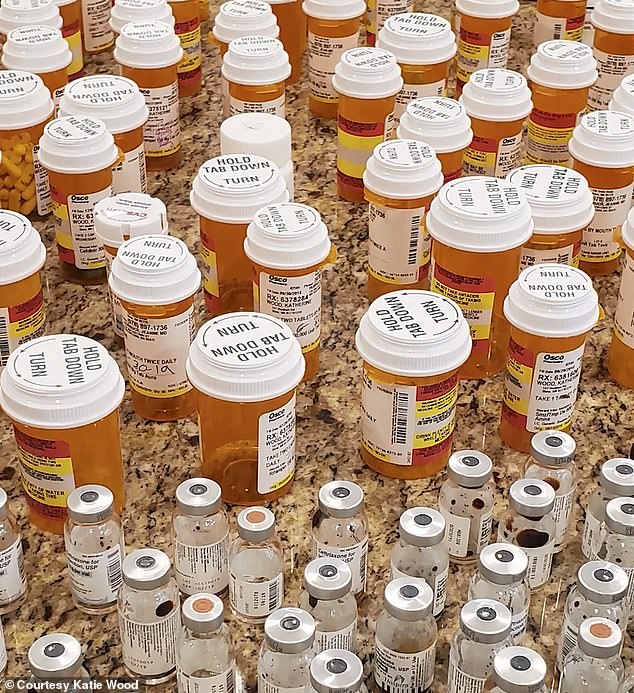 Another doctors prescribed her both oral and injectable antibiotics (pictured). Wood is 18 months into treatment and said she wants to encourage others to be their own advocate

Wood found a Lyme-literate physician, Dr Jeanne Hubbuch, whom she met for an appointment with November.

‘She went through all of my test results with me for an hour and a half and then looked at me and said ‘You’re fixable’,’ Wood wrote for Health.

Dr Hubbuch put Wood on a series of both injectable and oral antibiotics. Wood is now 18 months into treatment and said, although she has a long way to go, she feels much better than she did a year ago.

‘Dr Hubbuch recommends removing an attached tick and sending it for tick testing to determine which pathogens it is carrying. That way, you know what to treat should symptoms appear. ‘

Wood said she now wants to encourage others to push for testing if they believe something is wrong and to protect themselves when in the outdoors.

‘Untreated Lyme has stolen two and a half years from me so far,’ she wrote. ‘My goal is to reach remission and live a symptom-free life. I now find comfort in taking the proper precautions to protect myself and my family.