A pair of black soldiers who served in World War II were killed by a white superior officer for defying segregation and speaking to female Red Cross workers at a camp in France, newly-unearthed documents have revealed.

The slain soldiers – Allen Leftridge and Frank Glenn – were challenged by the sergeant for the breach of norms, the archived documents show, and then ruthlessly gunned down by another officer as punishment.

Despite the illegality of the action and several witnesses seeing the murders firsthand, the killer – an unnamed American soldier – was cleared and one of the men’s widows denied a survivor’s pension.

The altercation also saw a third soldier – a white man just released from a German prison camp –  killed in the crossfire, the two white soldiers involved in the murders, which took place on the war-torn Western front in 1945, absolved of their actions.

Previously long-forgotten, the duo’s story is now being told thanks in part to that woman, the late Sarah Leftridge, who shared the harrowing account with a black journalist who would eventually married her.

Previously long-forgotten, the story of Allen Leftridge and the other slain soldier is being told thanks to his late widow Sarah Leftridge, who offered a harrowing account of the incident –  after Army officials told her that her husband’s death was ‘due to his own misconduct’

Nearly a century later, the pair’s descendants are seeking justice – after, for reasons that aren’t clear, the widow was denied her rightful military benefits.

That ruling came from a US judge who ruled in a court martial called after the 1945 incident that her husband’s death came after he failed to heed to his superiors.

The incident transpired towards the end of the long-running conflict at an allied encampment known as The Lucky Strike, accounts offered by witnesses and since unsealed Army documents confirm.

The camp was a bustling tent city of roughly 58,000 American troops who at the time were awaiting transportation back to the United States after victory in Europe.

That said, the settlement was also heavily segregated – and described as both a ‘seventh heaven’ and a center of unbridled chaos due to brewing tensions between the war-weary troops. 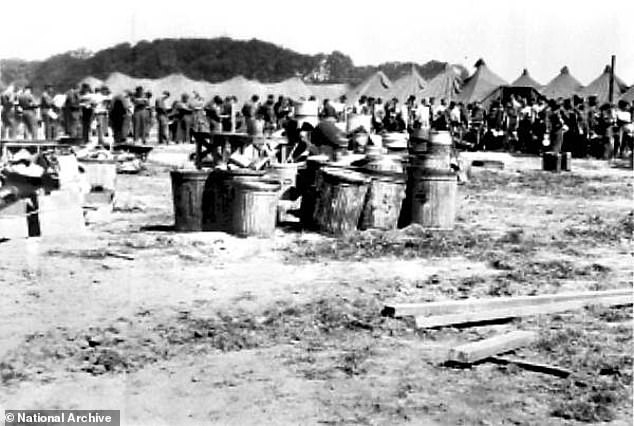 The incident transpired towards the end of the long-running conflict at an allied encampment known as The Lucky Strike, a bustling tent city of roughly 58,000 American troops who at the time were awaiting transportation back to the United States after victory in Europe

The encounter in question transpired at the height of these tensions roughly two weeks after the end of the war in September 1945.

Documents and witness accounts detail how Leftridge and Glenn – whose death, unlike his companion, was ruled as coming in the line of duty and his widow awarded compensation – entered a Red Cross tent where women were serving soldiers doughnuts and coffee.

The soldiers at some point went inside to get some – disobeying Army-laid laws that prohibited Black soldiers with socializing with French women.

At the massive encampment, Black troops were typically charged with guarding German prisoners, spurring officials to lay the rules amid fears the Black men would engage in interactions with white Europeans.

There are varying accounts of what transpired next – though the duo were reprimanded by an unnamed officer, who Alfred A. Duckett, Stacy Leftridge’s second husband, said was romantically involved with one of the woman.

‘[The] white MP ordered him not to stand there talking to this woman, Allen turned his back on him,’ Duckett said in an interview published in Studs Terkel’s 1984 oral history ‘The Good War.

Duckett, who died in 1984, was a journalist whose reporting until now served as the primary account of the encounter.

Duckett described how a subsequent scuffle left Leftridge ‘shot in the back and killed’ by an armed guard called over to quell the encounter. Glenn was also killed at some point during the previously shrouded incident. 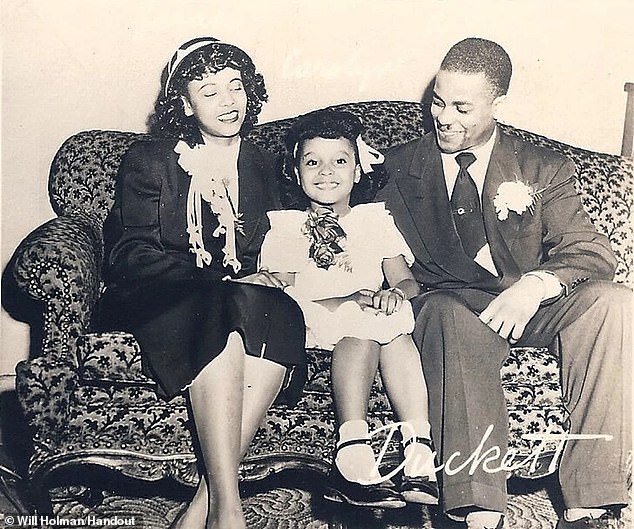 There have been varying accounts of the 1945 encounter –  which saw the duo reprimanded by an unnamed officer who Alfred A. Duckett (at right), Stacy Leftridge’s second husband, said was romantically involved with one of the woman. Duckett, a journalist, learned of the story after meeting Stacy and her daughter (pictured) in 1950. The pair would wed soon after

However, in an undated statement from the Library of Congress unearthed by The Washington Post, a witness, Solomon Johnson, said Leftridge and the sergeant ‘got into a hot discussion and suddenly came to blows’ before his and Glenn’s death.

After the fight was broken up, the witness reportedly said, Leftridge ‘took one step’ toward the guard, who then fired on him.

According to the documents, Johnson told Army officials investigating the incident that the unnamed guard, who was white, ‘never gave the command “Halt” or gave any warning’ to indicate that he was about to fire on Leftridge, much less Glenn.

While a court martial was called and the two unnamed white men put to trial, no legal action was taken in relation to the altercation – not to the sergeant nor the guard, nor their pair’s more senior officers.

In an explanation to the NAACP, the Army said Leftridge was killed because the soldier ‘failed to heed’ the challenge of a superior officer. The organization has since taken up Leftridge’s late widow’s calls to rectify her first husband’s service record.

The new documents shed new light on the decades old altercation, and reveals that nearly a century later, racial injustices leveled toward Black servicemen during WWII are at last being addressed.

The case was previously was only touched upon by Duckett in the 1984 oral history, and Sarah’s efforts to secure military benefits from the Army have still proved unsuccessful. 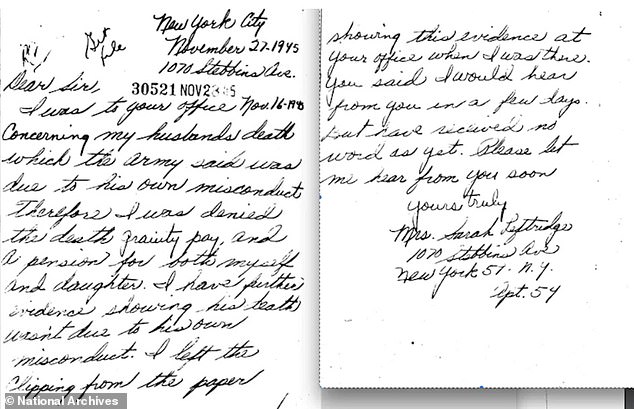 The duo’s story was detailed by the late Sarah Leftridge in the newly unsealed documents from the Library of Congress, which contain documents including this letter from Sarah to Army officials asking for her husband’s record to be rectified

However, thanks to the reporting of her late husband – who became obsessed with the case after interviewing Sarah about the incident, and eventually marrying her in 1950.

Leftridge’s daughter, Carolyn Holman, is now carrying on her stepfather and mother’s efforts to rectify her late father’s legacy, and is continuing to ask Army officials to clear his name and compensate her family for back payments that should have been sent to her mother.

With the recent attention the case has gotten, it looks as if though that is a possibility – with an Army spokesperson hinting that actions involving the case could be taken in the coming months.

Madison Bonzo told the Post in a statement that the service ‘puts a high priority on honoring the legacy of all our Soldiers and their families, especially when there may be an error or injustice.’

‘The Army is standing by to assist the Leftridge family through the Army Board for Correction of Military Records at the Army Review Boards Agency, should they decide to submit a records correction request,’ the statement said.