It has been six years since astronomers found strong evidence that a mysterious ninth planet might exist at the far reaches of our solar system.

But the so-called theoretical world – dubbed Planet X – has still not actually been seen by anyone, and for the meantime remains just that, a theory.

If it is real, scientists say it could have a mass about 10 times that of Earth and may take between 10,000 and 20,000 years to make one full orbit around the sun.

The reason they think Planet X is there is because they can see other objects in space being affected by it. So are they any closer to solving the mystery? MailOnline looks at where the world of astronomy currently sits on the issue.

Peculiar: It has been six years since astronomers found strong evidence that a ninth planet might exist at the far reaches of our solar system. So are they any closer to solving the mystery of Planet X? MailOnline looks at where the world of astronomy currently sits on the issue

What is so mysterious about Planet X?

Planet X, or Planet Nine as it has also been called, is a theoretical planet that some astronomers think could be hiding at the very edge of our solar system.

The reason they think this is because the orbits of a number of bodies in the distant reaches of our solar system have been disrupted by the pull of something, most likely an as yet unidentified ninth planet.

The problem is, no one has actually seen this potential world — its existence is based purely on mathematics. 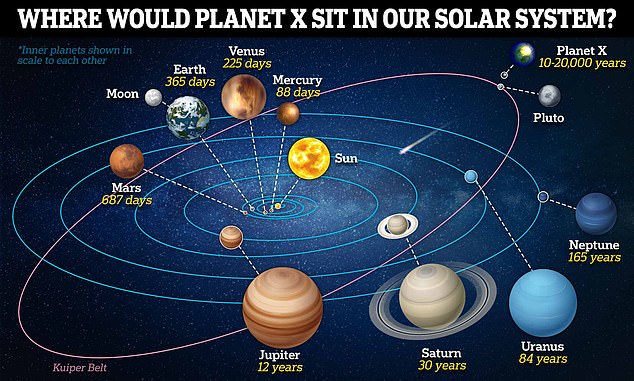 There are many things fascinating about this possible Planet X, but chief among them is that its hypothetical orbit would see it take between 10,000 and 20,000 years to make a single pass around the sun. Pictured is how this orbit would compare to the other eight planets

If it does exist, the data and computer modelling suggests that Planet X would need to be roughly four times the size of Earth and ten times its mass.

The theory goes that a body of this size and mass would explain the clustered paths of some smaller objects in the Kuiper Belt, a distant region of icy debris that extends far beyond the orbit of Neptune.

There are many things fascinating about this possible world, but chief among them is that its hypothetical orbit would see it take between 10,000 and 20,000 years to make a single pass around the sun.

Who first came up with the idea of a ninth planet?

WHO WAS PERCIVAL LOWELL?

A 19th Century travel writer and businessman, Percival Lowell decided to become an astronomer after reading a book on Mars.

He founded the Lowell Observatory in Flagstaff, Arizona, in 1894, before studying the Red Planet religiously and making in intricate drawings of the surface markings as he perceived them.

Lowell was convinced that the Red Planet sustained intelligent life forms. So much so that he believed that strange lines had had observed on the Martian surface were canals, built as the last attempt of a dying civilisation to tap water from the polar ice caps.

He also wrongly believed that Venus had spokes emanating from its centre.

The last proper planet to be discovered was Neptune in 1846. However, at the time there was a lot of speculation that it might not be the last, and that another world might still exist deep beyond its orbit.

Lowell is remembered for a series of outlandish theories about space, having decided to become an astronomer after reading a book on Mars.

Lowell was convinced that the Red Planet sustained intelligent life forms. So much so that he believed that strange lines had had observed on the Martian surface were canals, built as the last attempt of a dying civilisation to tap water from the polar ice caps.

Most importantly, however, Lowell was convinced there was a ninth planet in our solar system.

He died at the age of 61 in 1961, without ever figuring out whether his theory was true, but left a million dollars in his will to go towards finding Planet X.

Lowell’s observatory kept looking and 14 years later, on 18 February 1930, a young astronomer looking at two photos noticed what turned out to be a tiny world known as Pluto.

This was mistakenly considered to be the mysterious Planet X.

Ultimately, Pluto would lose its planet status anyway, being downgraded to a dwarf planet in 2006, along with what was initially described as the solar system’s tenth planet, Eris, discovered in 2005.

Now, Planet X is a general term for any undiscovered planet in the solar system.

But the idea of Planet X was briefly dismissed?

When Voyager 2 raced past Neptune it revealed that the planet was fractionally lighter than anyone had originally thought.

This led a NASA scientist to calculate that the orbits of the outer planets had made sense all along.

The mystery, it seemed, was closed. Planet X was not Pluto, not Eris, and it did not exist.

So why did its existence spring up again?

Primarily because of the Caltech astronomers Batygin and Brown.

Eight years ago they shared detailed mathematical modelling and computer simulations which hinted that a large object was to blamed for the unique orbits of at least five smaller objects discovered in the distant Kuiper Belt.

‘The possibility of a new planet is certainly an exciting one for me as a planetary scientist and for all of us,’ Jim Green, director of NASA’s Planetary Science Division, said at the time.

‘This is not, however, the detection or discovery of a new planet. It’s too early to say with certainty there’s a so-called Planet X.

‘What we’re seeing is an early prediction based on modelling from limited observations. It’s the start of a process that could lead to an exciting result.’

What other theories are there?

That’s according to physicists Jakub Scholtz and James Unwin, who claimed it would be so small that it would be the size of a bowling ball.

They made the suggestion in 2019, on the basis that a black hole could be equally as responsible as a planet for affecting the orbits of a series of rocky objects that circle Neptune.

Much like with Planet X, which some astronomers believe was a free-floating planet that was booted out of its original star system and began orbiting our sun after flying close to the solar system, Scholtz and Unwin said the same could apply to a mini black hole.

In 2020, a new theory was published in The Astrophysical Journal Letters by scientists from Harvard University which suggested that not only might Planet X actually exist but that there may once have been a binary companion to our sun.

‘Dr. Avi Loeb, Frank B. Baird Jr. Professor of Science at Harvard, and Amir Siraj, a Harvard undergraduate student, have postulated that the existence of a long-lost stellar binary companion in the sun’s birth cluster — the collection of stars that formed together with the sun from the same dense cloud of molecular gas — could explain the formation of the Oort cloud as we observe it today,’ the authors wrote.

The Oort Cloud is believed to be a giant spherical shell surrounding the sun, planets, and Kuiper Belt Objects containing billions, or trillions of icy pieces of space debris left over from the formation of the solar system.

It is believed to be the source of long-period comets.

Is Planet Nibiru the same as Planet X?

Nibiru, sometimes also referred to as Planet X, is a different hypothesised planet on the edge of our solar system.

Conspiracy theorists believe the gravitational influence of the ‘rogue planet’ Nibiru disrupted the orbits of other planets hundreds of years ago.

They claim the next disruptive passage into the inner solar system could happen at any time. 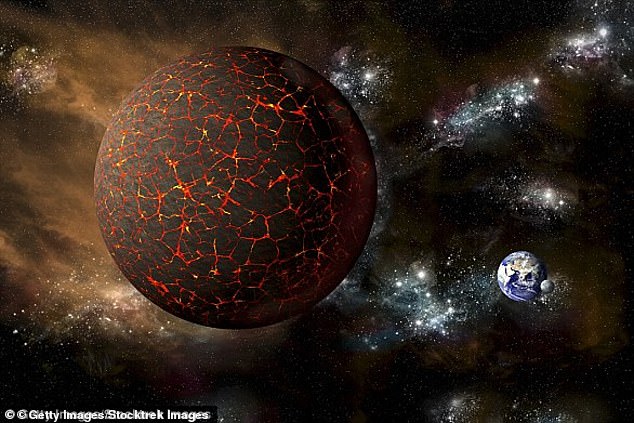 Peculiar: Nibiru (pictured in an artist’s impression), sometimes also referred to as Planet X, is a different hypothesised planet on the edge of our solar system

Nibiru is supposedly mentioned on ancient Sumerian clay tablets and is said to have crashed through the early solar system creating the asteroid belt and the Earth before vanishing again.

Some conspiracy theorists claim that this ‘planet’ is sending ‘plasmatic energy particles’ through our solar system.

The flow of energy will disrupt the ‘core flows’ of the Earth and trigger catastrophic changes in Earth’s climate.

They claim, since 1996, we have already been feeling the disruptive effects of the inbound rogue Planet X.

‘Nibiru and other stories about wayward planets are an internet hoax,’ NASA has said. ‘Obviously, it does not exist.’

So where are scientists with solving the mystery of Planet X now?

They haven’t got there yet, but remain optimistic of doing so.

Eighteen months ago Mike Brown said: ‘I think it’s within a year or two from being found.

But he cautioned: ‘I’ve made that statement every year for the past five years. I am super-optimistic.’

In 2021, the existence of Planet X was dealt a blow when a team led by physicist Kevin Napier, at the University of Michigan in Ann Arbor, examined the orbits of ‘extreme’ trans-Neptunian objects.

The researchers found that the objects’ perturbed orbits could actually be explained without the presence of a nearby planet.

They concluded that the objects only seem to have clustered paths because of selection bias, although many others disagree and say more data is needed.

There may be an answer either way soon, however.

The Vera C. Rubin Observatory (VRO) in Chile, which came online in 2021, began a ten-year survey of the sky last year which is expected to detect thousands more Kuiper belt objects.

A close examination of their orbits may be able to confirm or deny the existence of Planet X and provide clues as to its origin and location.

Harvard’s Dr Avi Loeb said: ‘If the VRO verifies the existence of Planet Nine, and a captured origin, and also finds a population of similarly captured dwarf planets, then the binary model will be favoured over the lone stellar history that has been long-assumed.’

WHAT IS THE KUIPER BELT?

The Kuiper Belt is one of the largest structures in our solar system – others being the Oort Cloud, the heliosphere and the magnetosphere of Jupiter.

Scientists are still just beginning to explore and our understanding is still evolving.

Its overall shape is like a puffed-up disk, or donut. Its inner edge begins at the orbit of Neptune, at about 30 AU from the Sun.

The inner, main region of the Kuiper belt ends to around 50 AU from the Sun.

Overlapping the outer edge of the main part of the Kuiper Belt is a second region called the scattered disk, which continues outward to nearly 1,000 AU, with some bodies on orbits that go even farther beyond. 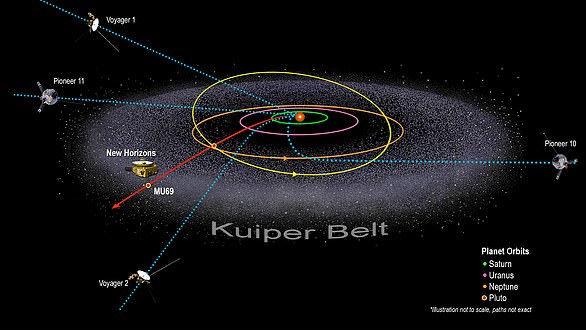 How was the Kuiper Belt created?

Astronomers think the icy objects of the Kuiper Belt are remnants left over from the formation of the solar system.

Similar to the relationship between the main asteroid belt and Jupiter, it’s a region of objects that might have come together to form a planet had Neptune not been there.

nstead, Neptune’s gravity stirred up this region of space so much that the small, icy objects there weren’t able to coalesce into a large planet.