Ruff crossing! Hilarious moment dog floats off on couple’s paddleboard as they pose for a picture by a glacier lake

A couple looking to take the perfect holiday photo in front of a pristine glacier lake ended up getting photobombed – by their dog riding a paddleboard.

Kelsey Pearce, 27, set up the shot looking out over the waters of Lake Jade in Washington state.

But as he she and her partner prepared to pose, they turned around to spot Rayleigh, Kelsey’s Black Labrador, drifting out onto the water on a paddleboard.

The couple, who were enjoying a hiking trip through the Alpine Lakes Wilderness area, gasped and raced to water’s edge but were too late catch the dog without getting their feet wet.

The hilarious video then shows Kelsey’s boyfriend plunging in to the freezing waters to drag the pooch back to shore.

‘I’m so sorry, I know you’re really annoyed with my dog right now,’ she can be heard saying before the soaked boyfriend exclaims: ‘Rayleigh, get off!’

Kelsey, a maths teacher, posted the video on TikTok with the tagline: ‘When you forget that you need a human to paddleboard properly…’ 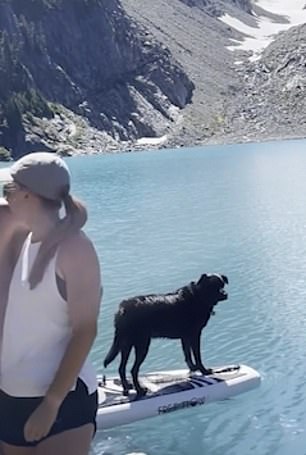 Kelsey Pearce, 27, and her boyfriend had set up a rather badly framed holiday photo on the edge of Lake Jade in Washington state when they were photobombed by her dog Rayleigh on a paddleboard 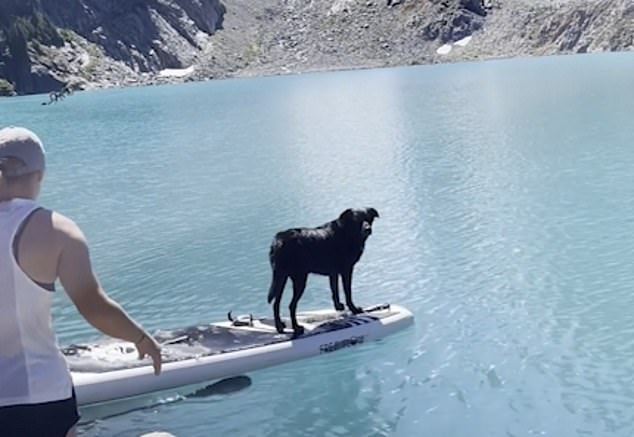 Kelsey, a maths teacher, posted the video on TikTok with the tagline: ‘When you forget that you need a human to paddleboard properly…’

It has since gone viral with over 530,000 views and thousands of likes.

Speaking about the hilarious incident, Kelsey said: ‘My boyfriend and I were backpacking in the Alpine Lakes Wilderness with my pup, and he had carried up a paddle board too!

‘My Apple Watch had died so we couldn’t take timed photos, so we decided to set up a video and then screenshot from it afterwards. 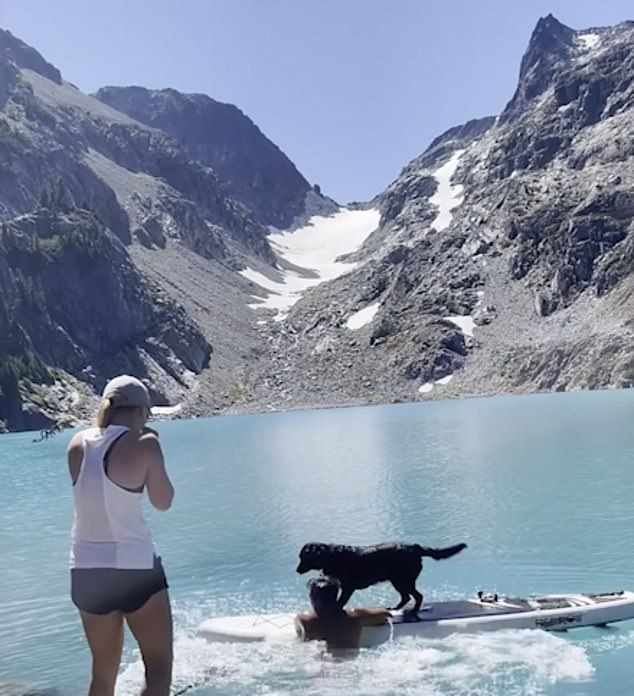 ‘Unfortunately my setup was poor so my boyfriend’s face wasn’t in frame, but we set up our poses, talked about whether to wear sunglasses or not, and then smiled.

‘Little did I know my dog had hopped on the paddleboard that was sitting in a cove and had pushed her way out onto the glacier lake!

‘This led to a panicked dog mom (me) and a wonderful boyfriend who saved the day!’

Kelsey frequently posts about her hiking expeditions, and has taken Rayleigh on several trips to Arizona, Oregon and other parts of Washington state.