Lindsay Standen, 38, said she was forced to put down her beloved ten-month-old Pomeranian Sashca after she was returned to her with a swollen head that ballooned to three times its normal size

A devastated dog lover was forced to have her Pomeranian put down after an unlicensed kennels handed back her puppy back unconscious and fatally brain-damaged – claiming she was only asleep.

Lindsay Standen, 38, said she was forced to put down her beloved ten-month-old Pomeranian Sashca after she was returned to her with a swollen head that ballooned to three times its normal size.

Mother-of-two Lindsay, from Charing, Kent, left her dog and two others with Springs for £600 while her family went on holiday, but was shocked at the what had happened to her puppy when she returned.

She said: ‘Her head was three times its normal size.

‘She was rushed straight into triage, she had brain damage, she couldn’t walk and she was given methadone and painkillers to help with the pain. We were told it was the worst case they had ever seen.

‘The vets couldn’t do any more for her so I decided to bring her home.’

The 38-year-old said when she picked them up Pomeranian was given back to her unconscious, with a swollen head.

The dog boarding company Maidstone Springers has been closed after a council investigation revealed it was unlicensed.

Company owner Leslie Roberts claimed the dog was not unconscious but asleep and does not know how she suffered her injuries. 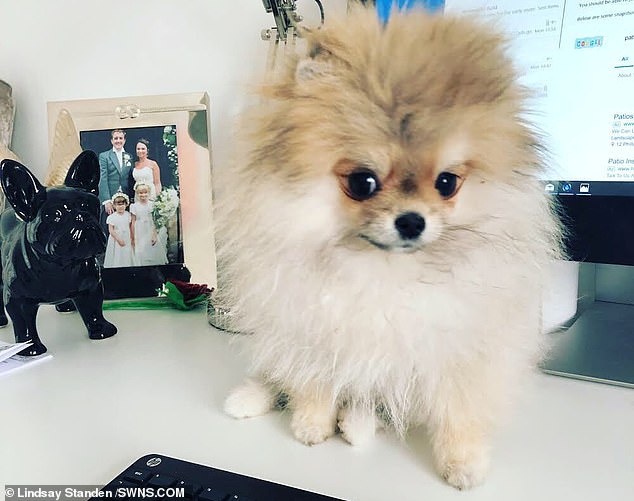 The Pomeranian, called Sashca, was returned to its owner with brain damage and later had to be put down

He added he has been receiving death threats amid social media claims the dog had been stamped on.

Lindsay has reported the owner to police, Maidstone council and the RSPCA.

The council confirmed Maidstone Springers has been asked to stop trading while an investigation is carried out.

The married mother said she kept in in touch with Leslie over email, throughout her two-week trip, to check the three dogs were okay during their stay. No problems were mentioned.

When the family collected their pets last Friday, they were shocked and immediately rushed Sashca to the vets.

After the operation she hoped Sashca would recover by being around her family, but tragically she did not walk again.

‘Sadly we made the decision to put her to sleep.’

She claimed that when she emailed Mr Roberts to say they were on the way to collect Sashca and he responded saying they needed to call as soon as possible, and that he told her over the phone she’d bumped her head.

She said: ‘He told me he had taken her to the vets on Friday morning and she had been given anti-inflammatory drugs but at no point had he told us. If he had we could have gone straight away.

‘I feel guilty, like I am responsible, because I was supposed to be her protector.’

A post widely shared on Facebook suggests the young dog’s injuries were consistent with being stamped or kicked on.

Leslie, 62, said he had ‘no clue’ about what had happened to Sashca, but said he knew something was not right and took her to the vets.

He said: ‘The owners had requested the dogs stay together so they were all in the same crate with food and water.

‘If anyone or another dog came near it, it would squeal its head off.

‘If I had trodden on it, kicked it or thrown it, it would not have stopped. I am not a man capable of doing anything like that.

‘I don’t know how they know it was blunt force trauma, there is no proof and if there was I would love to see it myself. It’s not anything I have done maliciously or purposely.’

He acknowledged the dog had a swollen head, but claims he did not know the cause of the injury.

He added: ‘The dog got injured and it died, I am not trying to sound grim or flippant, all I can say is I don’t know what happened.

‘It could have run into something, for the life of me I do not know.

‘Once I was aware she wasn’t right I took her to the vet on Friday morning. I didn’t know what to do I just knew there was something wrong.’

Leslie said he had contacted Maidstone Borough Council about what was required of him and was told because the animals were kept inside his home he did not need to have a licence.

A Maidstone Borough Council spokeswoman said: ‘We were made aware earlier this week of allegations that Maidstone Springers has been running a business without the necessary licence in place.

‘The matter is being actively investigated by the council and the company has been instructed to cease carrying out licensable activities in the absence of the correct documentation.’