Dog rescued from canal in Doncaster was starved

A dog rescued from a canal was ‘literally a bag of bones’ with ‘every single bone poking out of his skin’.

A passerby alerted the RSPCA after spotting Ollie dumped in a canal-side field in Doncaster, in south Yorkshire.

The animal welfare charity has now launched an investigation to find out who abandoned the lurcher who was ‘painfully skinny’ and shivering.

RSPCA Inspector Jennie Ronksley, who rescued Ollie, was shocked by what she found.

She said: ‘It’s a miracle he was still alive to be honest. It was so cold and he was so thin that there is no way he could have survived outside in that state for long.

‘He also couldn’t stand or walk properly, which is why I believe someone has driven him there and dumped him deliberately.’

Inspector Ronksley said she had two healthy lurchers twice Ollie’s weight and was disgusted someone could have allowed him to become so severely emaciated and malnourished.

She added: ‘Ollie was painfully skinny, he was skeletal. There isn’t an ounce of flesh on him, just bone and fur. 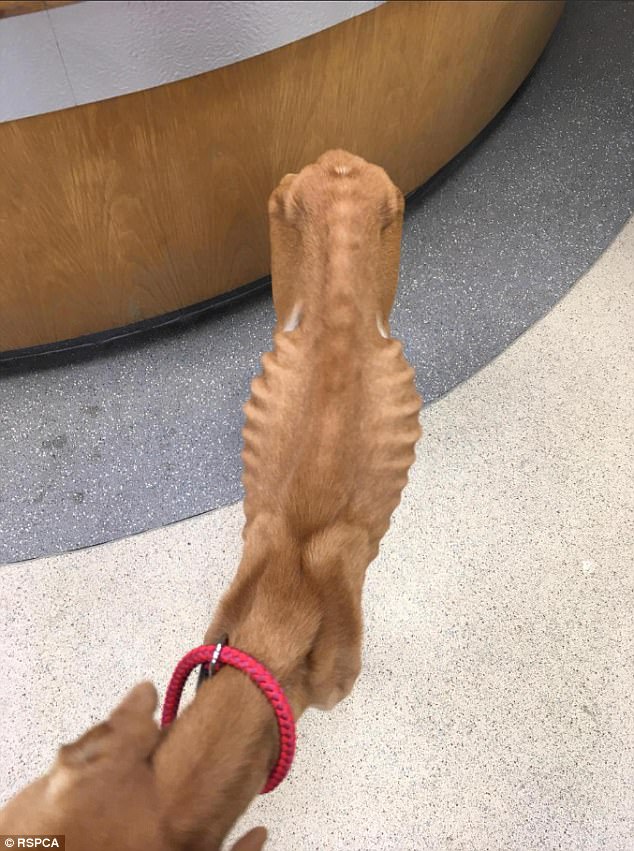 ‘I had to carry him to my van and then lift him out and carry him into the vets.

‘But, when I put him down in the waiting room, he got up and made a beeline to the shelves stuffed full of bags of food. He was obviously starving.’

The RSPCA has shared a series of pictures of the skeletal dog before he was saved in the hope of tracking down his owners.

Inspector Ronksley went on: ‘Someone somewhere out there will recognise Ollie; might have seen someone dumping him in Stainforth last week, or may even be suspicious that a dog like him use to live next door to them but has now disappeared.

‘It’s absolutely despicable to allow a dog to get into a state like this. To then simply abandon them to die instead of seeking veterinary advice, is unthinkable.’

Since his rescue Ollie is now being rehabilitated under the careful watch of his foster carers.

He has already put on around 2.5kg in a week.

‘He is much brighter and much happier now…he’s even got the energy to wag his tail again,’ Inspector Ronksley added.

Anyone who recognises Ollie or knows where he came from should call the RSPCA’s appeal line on 0300 123 8018.