Hong Chin, 45, had 18 sex workers staying in budget hotels around Gatwick Airport and the south east and south west of England

A dog show judge who made more then £100,000 by luring Asian woman to Britain to work in a prostitution network has been jailed for four years.

Hong Chin, 45, had 18 sex workers staying in budget hotels around Gatwick Airport and the south east and south west of England.

Chin began his ‘shameful’ double life as a pimp while he managed Royal Esher Bulldogs on a country estate in Surrey and adjudicated on dog shows including the London Bulldog Society Open Show in June 2015.

The human trafficker advertised sex workers for up to £100-an-hour on ‘adultwork.com’ and used the profits to send his daughter to a top private school, the Old Bailey heard.

He is believed to have come to the UK from Malaysia in 1998, but the Home Office has no record of when he arrived.

Today he was jailed for four years at the same court.

Judge Philip Katz, QC, said: ‘I’m not one hundred per cent sure that’s your real name or what your antecedents are, but there’s some evidence that you are Hong Chin and that you are from Malaysia.’

The judge said one of Chin’s sex workers told a ‘rather sad, degrading story that shows the level of exploitation suffered by some who are very vulnerable and in her position’.

‘Sex workers like her are passed around between bosses like you to work under their direction and earn as much as they could within a limited period before they were passed on to the next boss,’ he added.

‘At any one time a number of different women were working for you in this business of yours around the country.’

Customers are said to have paid for sex with cash after the pair used false names to reserve hotel rooms for prostitutes they controlled in Sussex, Hampshire, Kent, Surrey, Dorset, Thames Valley and Cardiff. 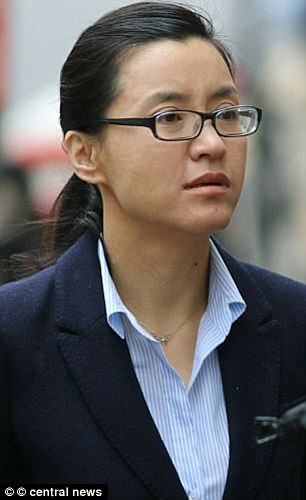 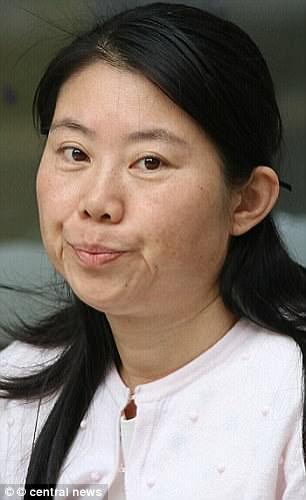 ‘This was an organised pimping business,’ said Judge Katz.

The court heard there was no evidence Chin used violence or threats to coerce the sex workers, but the judge said there had been ‘sustained, cynical exploitation of women whose circumstances you must have realised made some of them vulnerable’.

Crucially, officers discovered a Legoland pass with his photo and the name ‘Goon Saw’ – an alias he used to book hotel rooms.

The dog breeder, who paid £1,400 a month in private school fees for his daughter, claimed he earned extra cash through dog breeding, studding and adjudicating in dog competitions.

Judge Katz said: ‘This is not a court of morals, but it is for you a truly shameful situation.

‘At least two of the women you arranged for them to come here for them to have their prostitution controlled by you.’ 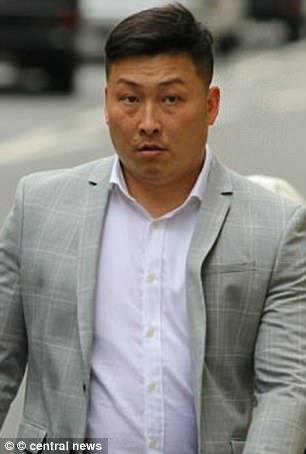 Wing Yuen, 41, (arriving at the Old Bailey, earlier in his trial) stood trial but was cleared of one count of conspiracy to control prostitution for gain

Wing Yuen, 41, stood trial alongside them but was cleared of one count of conspiracy to control prostitution for gain due to insufficient evidence.

Prosecutor Dale Sullivan said: ‘These three defendants conspired to traffick females for sexual exploitation and they did that in two ways.

‘Firstly, by bringing girls in from outside the UK from China and Korea, but also once they were here they then moved them from point A to point B to C and so on and so forth.’

He continued: ‘Li Wei Gao lived at Upper Court, Portsmouth Road in Esher. The address is within a country estate comprising a large manor house and smaller properties including dog kennels.

The defendants were charged after a human trafficking investigation called Operation Effect, which saw police identify 18 suspected sex workers staying in hotels including Holiday Inn and Airport Inn in Gatwick.

Mr Sullivan said only five of them admitted being sex workers, despite being found in hotel rooms littered with used condoms and lubricants.

They are due to be sentenced at the Old Bailey on 3 November.

Yeun from Crystal Palace, south London, denied and was cleared of one count of conspiracy to control prostitution for gain.