Doja Cat showcased her excitement for the Halloween season in a set of sultry new snaps she shared onto her Instagram earlier on Friday.

The Need To Know singer, 26, uploaded close up selfies as she lounged on comfortable black fabric wearing a jack-o-lantern bikini top.

The Grammy award-winning performer also shared a mirror selfie to her 24.4 million fans and followers wearing the same spooky-themed ensemble.

Ready for spooky season: Doja Cat, 26, shared a close up selfie taken from an upside down angle as she showcased her Halloween-inspired attire

The talented hitmaker shared close up selfies that she had taken form an upside down angle, showing off her orange pumpkin-themed bikini halter top.

She also flaunted her makeup look, which comprised of dark-colored lipstick with a purplish hue. Doja also added a heavy layer of black eyeliner around her eyes.

The entertainer drew on her eyebrows in a thin line, and added a blue shadow at the beginning for an additional pop of color.

The singer, whose real name is Amala Ratna Zandile Dlamini, chose to add a green caterpillar emoji to the photo series. 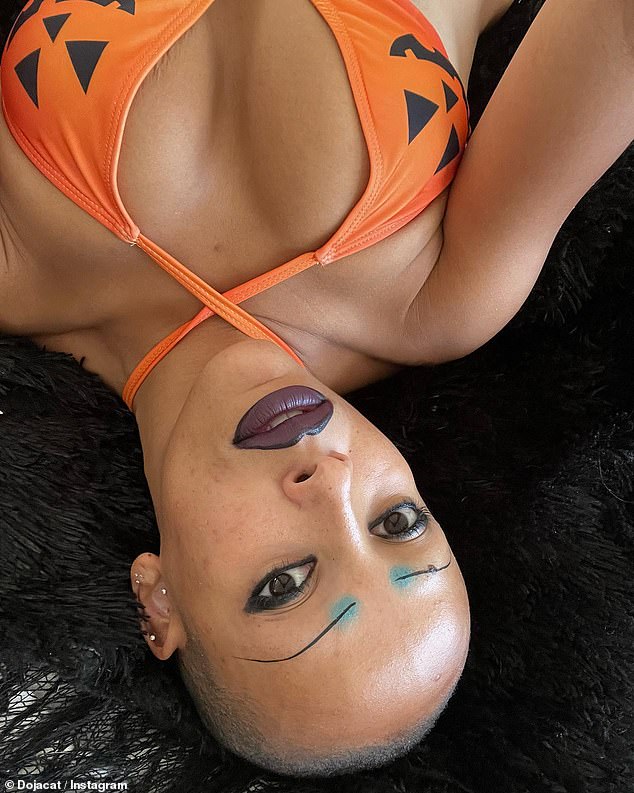 Getting ready: The Grammy award-winning singer appears to be excited for the Halloween season

When talking about her earliest fashion inspirations, Doja explained to Billboard that, ‘My mom painted for a really long time. My grandma is also a painter. A lot of that inspired me to take up fashion and visual experimental things.’

After the two selfies, she shared a third photo where she was sitting in a car with a pair of large, stylish shades.

She had also added a dark red, leather jacket as she took a quick photo from a lower angle.

Doja was having a blast with her fashion choice for the day, and gave her fans a mirror selfie to showcase the full outfit.

Along with the jack-o-lantern bikini top, the Say So singer added a pair of fitted, low-waisted black paints with rhinestones that showed off her toned midriff. 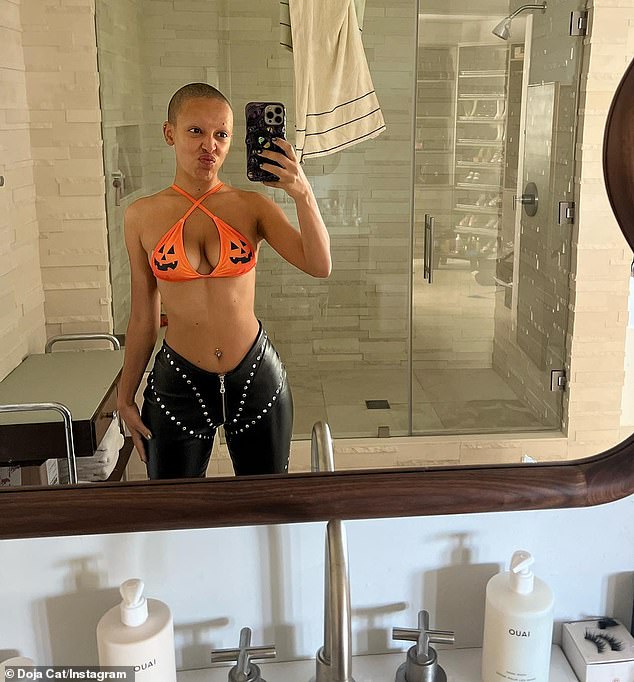 Stylish: Along with a pumpkin halter bikini top, Doja Cat added a pair of fitted black pants with silver rhinestones 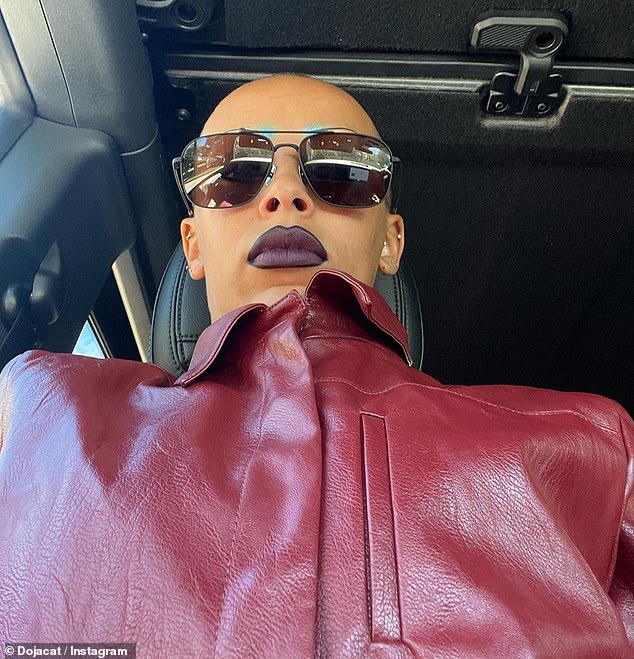 Upcoming celebration: The Need To Know singer’s birthday happens to be 10 days before Halloween

In the caption of her post, Doja hyped up her followers and social media users by writing, ‘HAPPY WHAT??!?????’ followed by a number of pumpkin emojis.

During a recent interview with CR Fashion Book earlier this month in September, the talented singer further talked about how fashion is a big part of her life.

‘I love dressing up. One of my favorite things to do when I was super little was play dress up. I remember I was painting on my face a lot, too,’ she stated.

Last month in August, Doja shaved her head and eyebrows during an Instagram Live video, explaining that she sees absolutely ‘no point’ in having hair. She added that she mainly wears wigs out and on stage. 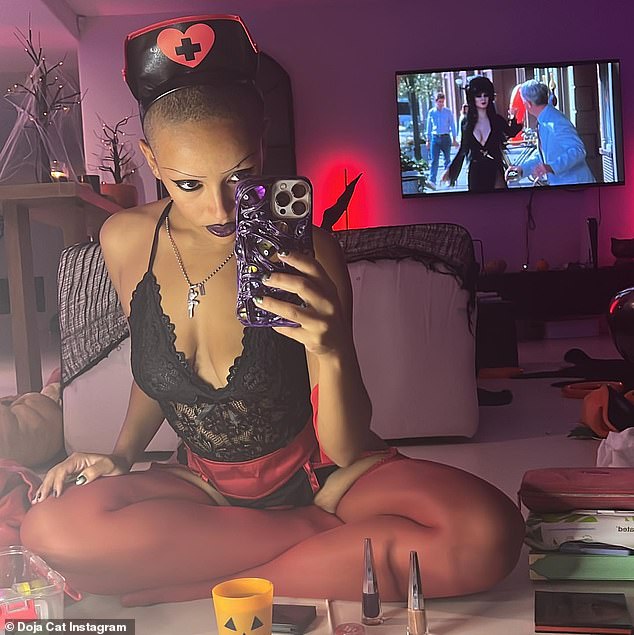 Dressing up: In a recent interview with CR Fashion Book, the singer expressed that, ‘I love dressing up’ 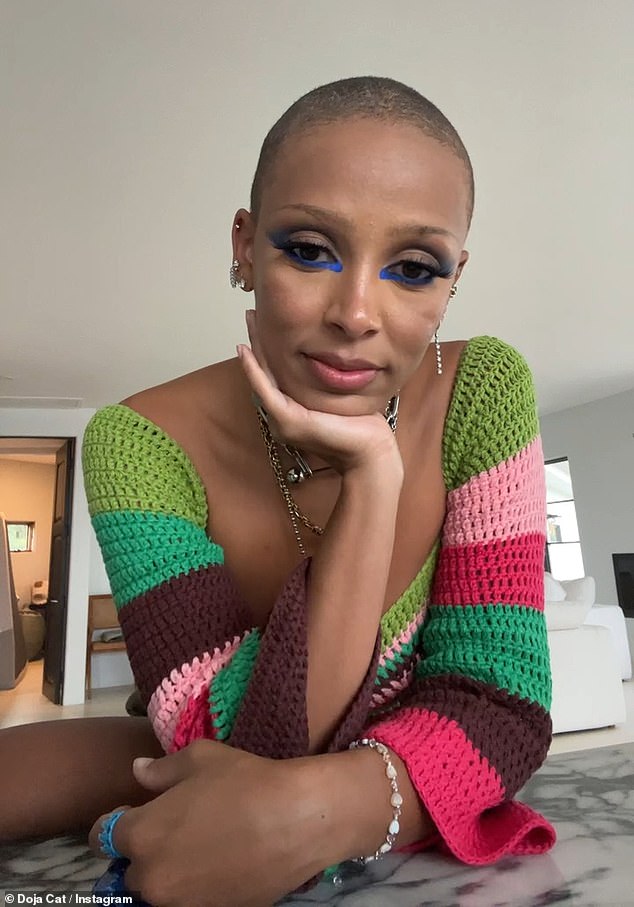 New change: During an Instagram Live video last month in August, Doja shaved both her head and eyebrows

The beauty has been creatively working on her upcoming album as she embraces the Halloween season.

For the most part, Doja has been keeping the contents and music of the album under wraps.

‘I can’t really tell much. I just know there’s a lot going on. I’m very into this ’90s German rave kind of vibe right now and it’s really fun,’ she admitted to CR Fashion Book earlier this month.

The award-winning singer also added, ‘That’s kind of a hint to the album. Rave culture, not house.’

Besides music, the star has other passions, including ‘stand-up comedy,’ and also has an interest to step away from the music industry, and test out acting. ‘I’d love to act. I’d love to be in movies. That’s a massive want for me,’ she informed Elle. 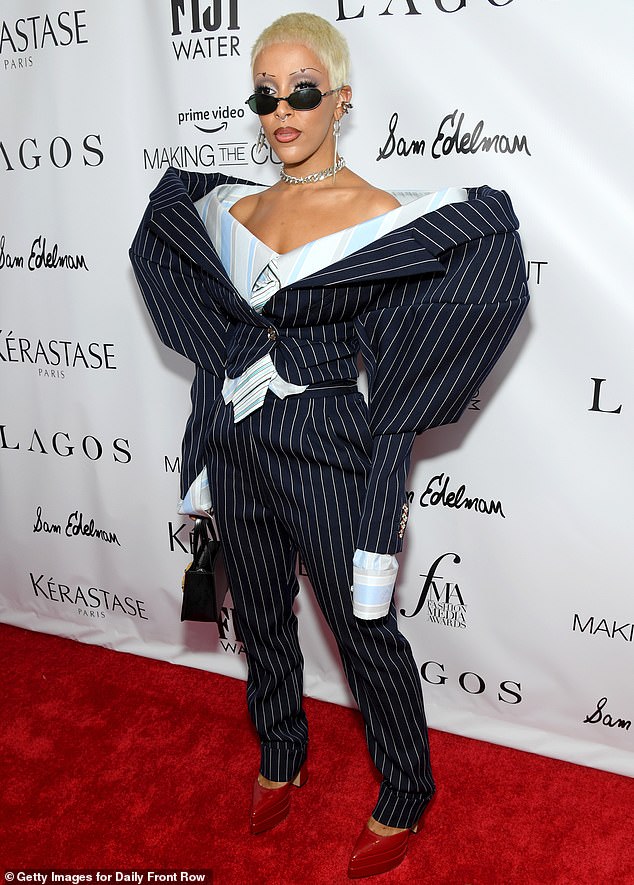 New music: Doja has been working hard on creating an upcoming album, but has kept its contents under wraps; seen in September in NYC