Dolphins discovered with signs of Alzheimer’s disease in their brains

Stranded dolphins have been discovered with brain changes associated with Alzheimer’s disease in humans.

Researchers from the University of Glasgow studied the brains of 22 odontocetes –  toothed whales – thathad died in coastal waters off Scotland.

One bottlenose dolphin, one white-beaked dolphin and two long-finned pilot whales had accumulated amyloid-beta plaques, which is a hallmark of dementia.

The researchers say these ill creatures could have led their otherwise healthy group, or pod, into shallow waters by mistake after getting confused or lost.

Whales, dolphins and porpoises are regularly found stranded in shallow waters or beaches around the UK coastline, and often in pods. Pictured: Rescuers tending to pilot whales stranded on the shore of a sea loch in Scotland

WHAT IS ALZHEIMER’S DISEASE?

Sufferers lose brain functions like memory, orientation and the ability to think and reason.

More than 5 million people suffer from the disease in the US, where it is the 6th leading cause of death, and more than a million Britons have it.

Alzheimer’s disease is currently thought to be a condition exclusive to humans, but it is difficult to unequivocally diagnose in other animals.

It presents itself as memory loss, impaired communication and the inability to perform everyday activities.

However, neuroscientists have linked these symptoms to the accumulation of misfolded proteins called amyloid plaques and neurofibrillary tangles in the brain’s grey matter.

Alzheimer’s patients can also show gliosis – an increase in glial cell numbers in the central nervous system in response to its damage.

Very similar neurological signatures have been observed in odontocetes, suggesting they may also be susceptible to the degenerative disease.

Indeed, whales, dolphins and porpoises are regularly found stranded in shallow  waters or beaches around the UK coastline, and often in pods.

Rescue organisations will try to carefully move these animals back to deeper waters, but sadly sometimes they do not survive the event.

While the underlying cause for these strandings is not always clear, one idea that has been put forward is known as the ‘sick leader’ theory. 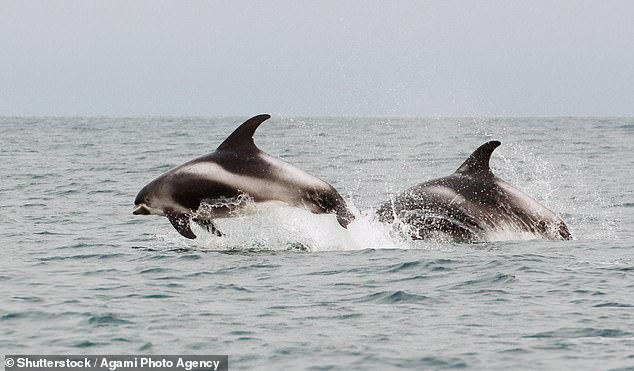 Neurological signatures similar to those in humans with Alzheimer’s have also been observed in odontocetes, suggesting they may also be susceptible to the degenerative disease. Pictured: White-beaked Dolphins (stock image)

This is where the dominant animal in the group develops a neurological disease, and they misdirect their group into dangerously shallow waters,

For the study, published in the European Journal of Neuroscience, the researchers wanted to investigate any link between strandings and the presentation of Alzheimer’s disease.

To do this, they examined the brain pathology of stranded animals for any signs of the degenerative neurological condition.

All 18 of the animals described as ‘aged’ showed amyloid-beta plaques, but three also showed neurofibrillary tangles and other evidence of Alzheimer’s disease.

The simultaneous occurrence of both amyloid-beta plaques and neurofibrillary tangles suggest they developed spontaneously, the researchers claim.

One other specimen did not have amyloid plaques, but did have neurofibrillary tangles and other neuritic plaques indicative of dementia. 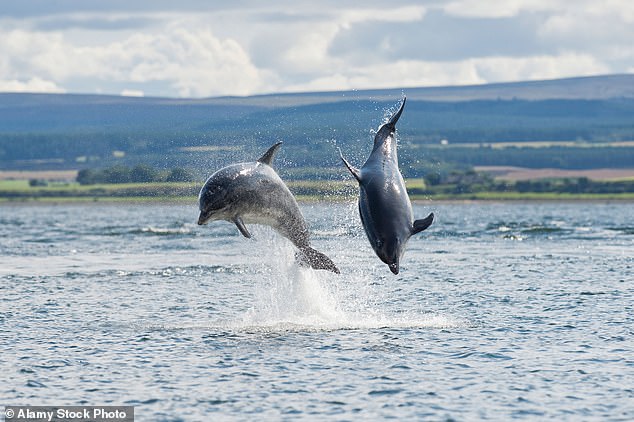 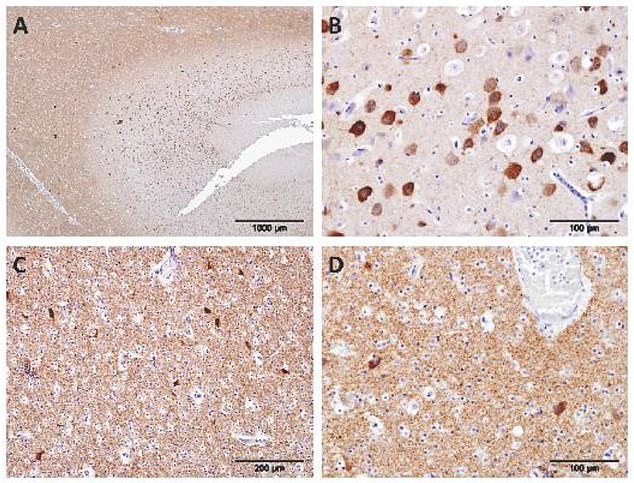 The study cannot confirm if any of these creatures suffered with the cognitive deficits associated with clinical Alzheimer’s in humans.

But if they did, they may have led their pod to dangerously shallow waters or onto a beach, and perished as a result.

Lead researcher, Dr Mark Dagleish from the University of Glasgow, said: ‘These are significant findings that show, for the first time, that the brain pathology in stranded odontocetes is similar to the brains of humans affected by clinical Alzheimer’s disease.

‘While it is tempting at this stage to speculate that the presence of these brain lesions in odontocetes indicates that they may also suffer with the cognitive deficits associated with human Alzheimer’s disease, more research must be done to better understand what is happening to these animals.’

If you found this story interesting…

Scientists have found that exposing older people to flavours from their youth enhances their memories of key events.

And, watching TV increases your risk of dementia – but using a computer can help protect against it, a study suggests.

Male bottlenose dolphins have been found to form tactical alliances with other males, who will then compete together against rival alliances for access to females.

A research team led by the University of Bristol studied the marine mammals and discovered that they build more alliances than any species other than humans.

They also found that different groups of allied dolphins will co-operate, allowing males to spend more time with the females they are pursuing, and resulting in the long-term benefit of reproductive success.

Co-lead author Dr Stephanie King said: ‘Our work highlights that dolphin societies, as well as those of nonhuman primates, are valuable model systems for understanding human social and cognitive evolution.’