Dolphins whistle to each other as part of male bonding ritual

Dolphins whistle to each other as part of a male bonding ritual and rely on ‘wingmen’ to vie for the affection of potential mates, new research has found.

Experts at the University of Bristol said bottlenose dolphins can become more popular simply through vocal exchanges, helping them to maintain weaker but vital social relationships.

Not only this, but a separate study found that the more popular a dolphin is with other males, the more successful it is when it comes to producing calves.

It found that groups of male bottlenose dolphins will work together to compete with rival groups over access to females, with the most popular males in the group having the best mating success.

Dolphins whistle to each other as part of a male bonding ritual and rely on ‘wingmen’ to vie for the affection of potential mates, new research has found

How do dolphins use ‘signature whistles’?

Signature whistles are sounds made by dolphins, used to identify different individuals.

Dolphin calves will eventually make their own individual whistle, but in the first stages of life, they use their mother’s.

In a previous study, researchers observed a dolphin mother at Six Flags Discovery Kingdom in California, who gave birth to a dolphin baby called Mira in 2014.

They recorded 80 hours of sounds from the mother, baby, and other dolphins in the enclosure, during the two months before birth, and two months after birth.

The recordings showed that the mother dolphin began increasing her signature whistle two weeks before birth, and continued to do so for two weeks after birth, before tapering off.

In contrast, the other dolphins in the enclosure did not produce their own signature whistle at very high rates during this time.

The Bristol study, meanwhile, discovered that male dolphins are able to stay popular by using high-pitched vocal exchanges with other males as a low-cost way to maintain their alliances, rather than through other physical bonding activities.

Experts say this is an important interaction to maintain when groups become larger and competition over resources increases.

Lead author Emma Chereskin, a student at the University of Bristol, said: ‘Many animals, including humans, use tactile contact, touch, to strengthen and reaffirm important relationships.

‘But as the number of close social relationships increases, so too do the demands on the time and space available for relationship maintenance through physical contact.

While male dolphins are known to use physical contact such as gentle petting to connect with strongly bonded allies, the University of Bristol research shows they rely on less time-demanding vocal exchanges to remain connected with weaker allies.

Scientists used nine years of acoustic and behavioural data from a dolphin population in Shark Bay, Western Australia, which helped them assess how male dolphins bonded with each other.

Bottlenose dolphins team up to hunt or protect themselves from predators. Adult males live mostly alone or in groups of two to three and join pods for short periods of time.

These usually number around 10 to 30 members, although ‘superpods’ of more than 1,000 have been recorded.

‘This illustrates these weaker but still key social relationships can be maintained with vocal exchanges.’ 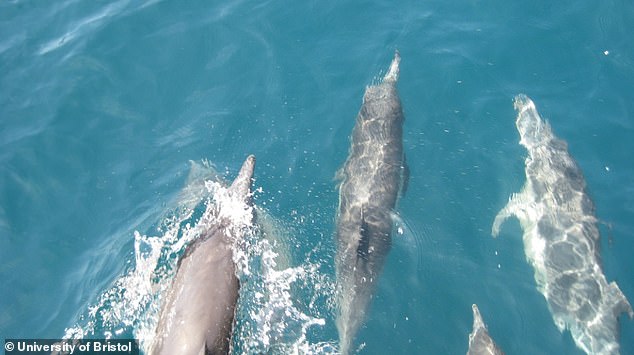 Scientists used nine years of acoustic and behavioural data from a dolphin population in Shark Bay, Western Australia, which helped them assess how male dolphins bonded with each other

‘But more importantly and in line with the social bonding hypothesis, vocal exchanges can function as a replacement of physical bonding, allowing allied male dolphins to ‘bond-at-a-distance’.

‘This evidence in support of the social bonding hypothesis outside of the primate lineage raises exciting new questions on the origins and evolution of language across taxa.’

Bottlenose dolphins inhabit warm and temperate seas worldwide, being found everywhere except around the Arctic and Antarctic.

They are renowned for their intelligence, using marine sponges as tools to reach food that would normally be inaccessible, and communicate through pulsed sounds, clicks and body language.

The study has been published in the journal Current Biology.

Whales and dolphins have been spotted ‘carrying’ or caring for their dead young multiple times.

These creatures could be mourning or they have failed to accept or recognise that the offspring or companion has died.

Scientists still do not know if aquatic mammals truly recognise death and are looking to carry out more research on this issue.

In 2016, scientists found evidence that whales and dolphins hold ‘vigils’ for their dead.

They analysed several cases where mammals clung to the bodies of dead compatriots, and kept vigil over a dead companion.

At the time, they said the most likely explanation was mourning.

The study compiled observations from 14 events.

They found mothers often carried their dead young above the water, often flanked by friends.

In many cases, the dead offspring were decomposed, indicating they had been held for a long time.