Our legislature is in a state of near-paralysis, somehow unable to reach any sort of agreement on how to leave the European Union and thus honour the 2016 referendum. So apparently it has nothing better to do than indulge in displacement activity and virtue-signalling.

If you think I am being unfair, you should know that on Thursday MPs spent an afternoon arguing that the Government should ban the consumption of dog meat.

This follows a Bill proposed by the Conservative MP Bill Wiggin, seeking to make eating dogs a criminal offence in this country. MPs have also raised it with the Prime Minister directly (as if she didn’t have enough on her, um, plate).

Now, you might say, it is a terrible thing to eat a dog. Personally, I wouldn’t do so. If any of our four dogs died, I would give them a decent burial, never for a moment considering whether I should pop them in the oven and serve them up with potatoes and vegetables on the side.

But here’s the thing: I am not alone in rejecting such a dish. I share that fastidiousness with the entire population of the United Kingdom. To be specific, there are no recorded instances — none, zero — of anyone eating dog meat in this country. At least not deliberately.

Vets do, of course, put down dogs — euthanasia is allowed for pets, as it is not (yet) for unwanted or demented old folk. But I am assured by officials at Defra (the Department for Environment, Food and Rural Affairs) that as vets typically put down dogs with a lethal injection of barbiturates, the dead pets would be unfit for human consumption (and so banned under existing food hygiene laws).

None of these facts have given those arguing for legislation to ban the eating of dogs any pause for thought.

Thus the MP initiating last week’s debate, Jim Shannon of the Democratic Unionist Party, admitted that ‘there are no cases of dog or cat meat being eaten in the United Kingdom’. Nevertheless, he added: ‘We should make explicitly clear that the totally unnecessary practice of eating dogs should never be welcome.’

But, Jim, no one is thinking of welcoming it. It is taboo in the UK, just as cannibalism is, and therefore requires no legal enforcement. There is no law in this country criminalising the consumption of humans, for the same reason.

The Ulsterman spoke — as all those speaking in the debate did — about his intimate relationship with our canine companions: ‘Since I was a young boy, dogs have played a huge part in my life. I remember my first dog, in Ballywater when I was a four-year-old, very well. It was a collie dog called Flash. Its name has never escaped my mind …’

Very moving. But scarcely justification for a new law which will make not the teeny-tiniest difference to the life of a single pooch.

The proponents of such a measure dispute that. They argue that if Parliament acted in this way, it would ‘send a message’ to countries such as China and South Korea, where dogs are indeed eaten.

One of the MPs claimed that Parliament banning dog meat consumption in Great Britain (where it doesn’t take place anyway) ‘would have a tremendous effect worldwide. A ban would send a powerful message to countries where this horrific and disturbing practice takes place’.

Really? I don’t imagine that legislators in the Chinese People’s Congress would exclaim: ‘Oh, look — the British are saying we aren’t doing enough to stop our people eating dogs. We must do better and follow their great example!’ 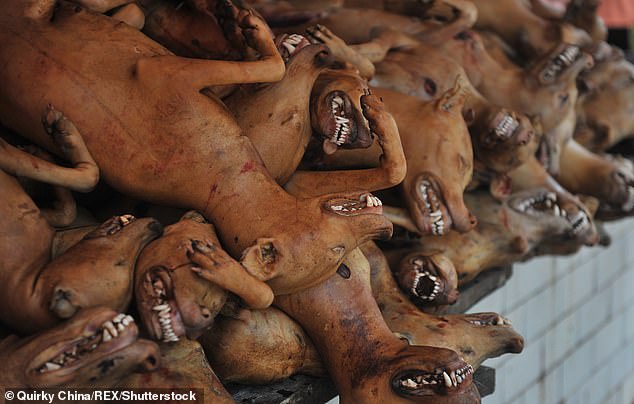 Dog carcasses in Yulin city. The animals are often barbarically beaten to death with bamboo poles because it believed by many that the adrenalin surging around their bodies adds to the resulting meat’s flavour

In fact, China some years ago passed laws making it illegal to sell dog meat for consumption. The problem is that it remains a popular delicacy in many parts of that vast nation, and enforcing the law there is not as easy as it is in Surrey — where (forgive me for labouring the point) people don’t eat dogs and don’t require a law to punish them for doing so.

In short, this measure would be nothing more than virtue signalling. That is, a statement or act designed to make the instigator feel or look good, but which has no other effect.

This was more or less acknowledged by the Tory MP Giles Watling, perhaps the dog consumption ban’s most persistent parliamentary proponent: ‘Even if it is virtue-signalling, I say, “Why not?”

‘Let’s signal our virtue — our morality — on this issue to the rest of the world.’

Yes, let our MPs tell the world how virtuous we are: its billions of inhabitants are all bound to admire our self-praise.

But there is a serious point here. As the Defra minister David Rutley pointed out, it would be very difficult, even supposing a complaint had been made and a video somehow obtained of the cooking process, to prove that someone had actually eaten dog meat.

How would the police establish it? Blood tests of the alleged dog-eater? More invasive procedures? Let’s not go there. I’m sure the police wouldn’t want to.

And what would be the sentence if any (so far non-existent) British dog eater were successfully prosecuted?

This would all involve primary legislation. Its proponents apparently think this would be a sensible use of Parliamentary time when the imminence of Brexit means an unprecedented torrent of legislation needs to be passed in the coming weeks. The Government estimates it will need to pass more than 500 statutory instruments between now and Brexit day.

You could argue that Parliament is already making a dog’s dinner of Brexit. But that’s no reason for MPs to make even bigger fools of themselves.

If you think Theresa May’s handling of Brexit has been a farce, that’s nothing compared with what’s being going on at the Independent Inquiry into Child Sexual Abuse (IICSA) — the quasi-judicial monster she set up in 2014 while Home Secretary.

In those five years, it has seen the resignations of three chairwomen (men are barred from that role, it seems), is likely to cost well over £100 million (to the enrichment of lawyers, at the expense of taxpayers) and has achieved … well, what exactly?

Now we learn that Lady Brittan — the widow of the late former Home Secretary Leon Brittan — has received a letter from the Inquiry warning that she is likely to be ‘upset’ by the fact that it will soon be ‘re-examining’ allegations that her husband had been a child sexual abuser. 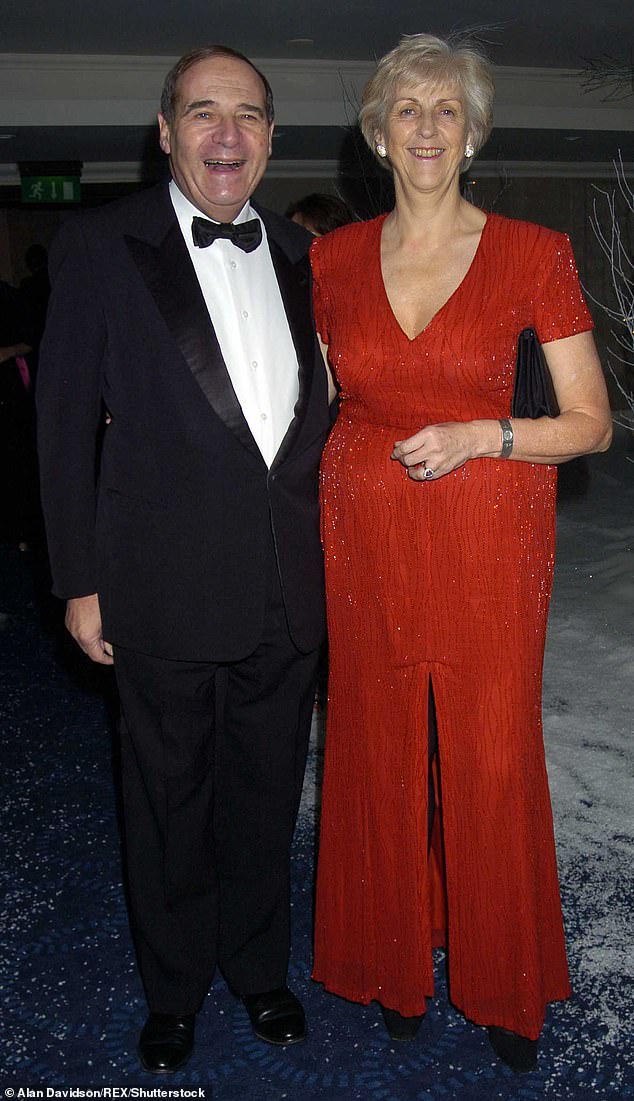 Lady Brittan, widow of the late former Home Secretary Leon Brittan (pictured together in the Great Room of the Grosvenor House Hotel, Park Lane, London during the Conservative’s Winter Ball in 2005) received a letter from the Independent Inquiry into Child Sexual Abuse warning that she is likely to be ‘upset’ by the fact that it will soon be ‘re-examining’ allegations that her husband had been a child sexual abuser

Let’s be clear: these ‘allegations’ have been thoroughly rejected following a multi-year investigation by the Metropolitan Police. Not only that, the person responsible for those allegations is now facing trial for perverting the course of justice.

And the Met agreed to pay Lady Brittan compensation of £100,000 for what they put her through during their absurdly prolonged investigations (which included digging up her garden in a grotesque search for the remnants of what the accuser claimed were Brittan’s victims).

I had thought the IICSA was charged with investigating real child sexual abuse and not the fantasies of sick individuals.

Diana Brittan has already suffered enough as a result of these slurs. Her husband’s memorial service in 2015 was not attended by Theresa May — the first time that a serving Home Secretary had not so honoured the passing of a predecessor.

Mrs May didn’t even send a junior official to represent her. She should be ashamed. As for the IICSA, it has become a taxpayer-funded festival for ghouls.