Dominic Perrottet dragged into Gladys Berejiklian ICAC inquiry: ‘He does just what I ask him to’

Gladys Berejiklian’s successor as NSW Premier, Dominic Perrottet, has sensationally been dragged into the corruption inquiry into her secret affair with disgraced Liberal MP Daryl Maguire.

A tapped phone call played to a defiant Ms Berejiklian on Friday featured Ms Berejiklian speaking about funding projects in Mr Maguire’s seat of Wagga Wagga and saying of Mr Perrottet: ‘He does just what I ask him to.’

During the call, Mr Maguire said he ‘heckled’ the then treasurer Mr Perrottet and said he would have a ‘f**king riot on your hands’ if his electorate did not get funding for projects including Wagga Wagga Base Hospital and Tumut Hospital.

In the call, Mr Maguire recalled that Mr Perrottet had told him there was no money in the budget for those projects but there was money for a planned crack down on graffiti.

She called back later and said: ‘I’ve already got you the Wagga hospital. I just spoke to Dom (Perrottet) … He just does what I ask him to.’

She added: ‘We’re giving Wagga more money than ever before,’ she said. ‘I just got you the one hundred and seventy mill … you can’t tell me you’ve been hard done by.’

Ms Berejiklian said she had got Mr Maguire that money ‘in five minutes’ but he would need to speak to Health Minister Brad Hazzard about Tumut Hospital because she wouldn’t fix everything for him.

Mr Maguire was pushing for between $500,000 and a million dollars for that hospital.

Mr Robertson asked Ms Berejiklian about a September 2017 deal ‘which would give (Mr Maguire) enough money to pay off his debts of $1.5 million’.

‘Did you suspect that Mr Maguire was or may have been engaged in corrupt conduct?’ he asked.

‘I did not,’ Ms Berejiklian replied.

‘How did you think a Member of Parliament was capable of earning a commission something in the vicinity of $1.5 million in relation to a land deal?’

‘Why did you believe that 1.5 million dollars might be able to be earned by Mr Maguire,’ Mr Robertson asked.

‘I have no recollection of what the context was of that telephone conversation but my general response is I never suspected that he was doing anything untoward,’ she replied, adding that she always assumed Mr Maguire ‘was very aware of his disclosure requirements’.

In another call played to the commission, Ms Berejiklian also called Mr Maguire ‘hokis’, an Armenian term of affection, but also said that sometimes he shouted at her.

Ms Berejiklian’s parents are both Armenian immigrants to Australia.

A defiant Ms Berejiklian told the Independent Commission Against Corruption she would not have revealed her secret relationship to Daryl Maguire to her colleagues even now.

‘If you were able to have your time again would you disclose your close personal relationship with Mr Maguire?’ Mr Robertson asked.

Ms Berejiklian responded she didn’t feel it was a commitment she could share with her parents, Arsha and Krikor, or her sisters.

‘I didn’t feel there was a sufficient significance to be able to do that in terms of significance.’

It comes after a stressed looking former premier arrived for her highly anticipated appearance at the corruption inquiry into her secret love affair with Daryl Maguire.

Ms Berejiklian said that she did not ask Mr Maguire for the key to her house that she had given to him back. 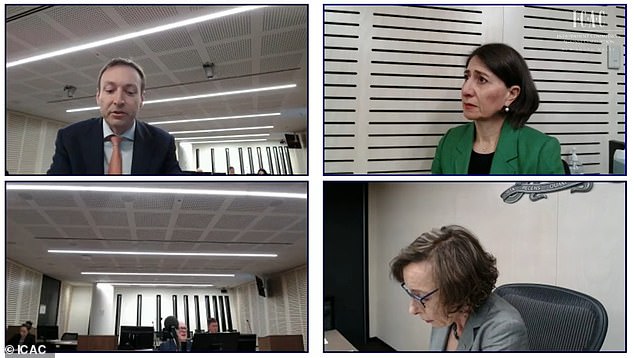 In a testy exchange, Mr Robertson asked Ms Berejiklian about her understanding of proceedings.

‘Are you having some difficulty with my questions? I am trying to frame them in a precise way as well so you can answer them yes or no.

‘Are you having some difficulty understanding my questions,’ he asked.

Ms Berejiklian replied: ‘Mr Robertson, I’m just concerned that you are skewing the fact that all of my colleagues rightfully deserve my attention and my advocacy and my support for things that mattered in their communities.’

‘You have senior counsel to represent you who have an opportunity to ask for clarification. You understand that, don’t you?’

Mr Robertson asked why Ms Berejiklian why she didn’t declare her close personal relationship with Mr Maguire ‘with a view to avoiding any perception of favouritism, to use your phrase, in relation to Mr Maguire?’

‘We didn’t share finances, we didn’t live together, I was not confident in his level of commitment. I did not regard him as a member of my family, and I did not regard there to be any impact on my public responsibility and I did not think the relationship had a sufficient status for me to disclose it and had I been in a (situation) where I’ve thought it was significant enough I would have, but I didn’t have confidence, didn’t have confidence that was against case,’ she replied.

Outside the hearing, Ms Berejiklian said she will tell the Independent Commission Against Corruption she will ‘strenuously stress’ that she has always put the interests and her ‘love and support’ for the people of NSW first.

Her day at ICAC has finally come – after six months of private hearings, two weeks of public hearings and 500 pieces of evidence.

Speaking to the media, she thanked the public ‘for the amazing support’

‘It’s been very very deeply appreciated at a very difficult month. I’m looking forward to fulfilling my obligations and appearing before this inquiry.

‘I will strenuously stress again – as I have every day of my life in public office – my love and support for the people of this great state has always been the forefront of any decisions I’ve made in public life.’

Ms Berejiklian said she had not been listening to proceedings at ICAC over the past two weeks.

‘All I will say is my love and passion for everything that is great about New South Wales remains the case. I’ve been buoyed by the public support I’ve seen. Every decision I’ve taken in public life has always been in the public’s best interests, and the interests of the people of this state.’

But she will be regretting having spoken so openly last year about her ‘close personal relationship’ with Daryl Maguire a year ago after she admitted the disgraced MP was her secret boyfriend at a previous Independent Commission Against Corruption inquiry.

The interviews appeared to engender public sympathy for Ms Berejiklian – but they came back to bite her on Thursday when the counsel assisting the ICAC, Scott Robertson, threw them back in her face with devastating results. 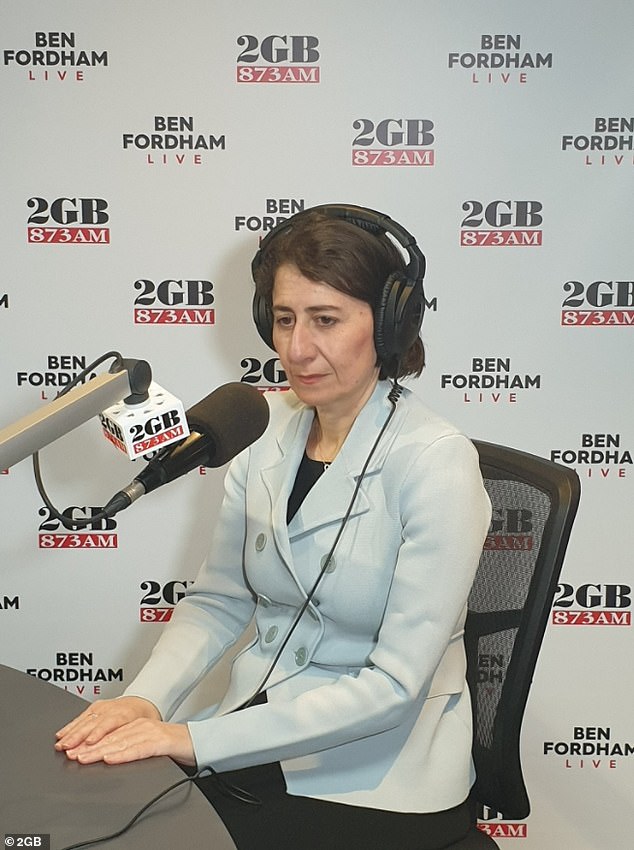 On Thursday morning, Ms Berejiklian’s legal team launched a last ditch application to have evidence from Mr Maguire kept private at the corruption inquiry into the former premier.

Sophie Callan, a barrister acting for Ms Berejiklian, told ICAC Assistant Commissioner Ruth McColl, SC, who is presiding over the inquiry, that ‘hallmarks or indications at the level of commitment’ in the relationship with Mr Maguire should not be aired publicly.

ICAC counsel Scott Robertson said the application should be refused. ‘A public inquiry is to be held in public,’ he said.

He added that having a private session would risk it ‘becoming a public inquiry in name only’.

Mr Robertson argued that the hearing should be able to publicly delve into the nature of the relationship between Ms Berejiklian and Mr Maguire because the former premier openly gave interviews to the press after a previous ICAC hearing a year ago about how she planned to marry him.

Daryl Maguire, the former secret boyfriend of Gladys Berejiklian, said the couple talked about getting married and having a baby 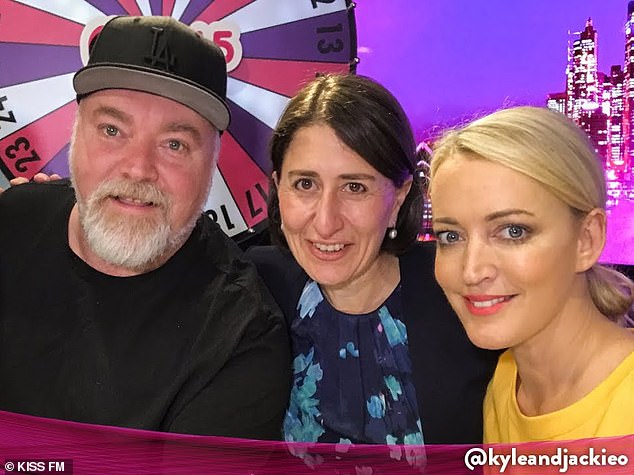 What Gladys Berejiklian said outside ICAC on Friday morning

‘Can I just say good morning everybody. Thank you for the amazing support the public has given to me. It’s been very very deeply appreciated at a very difficult month.

‘I’m looking forward to fulfilling my obligations and appearing before this inquiry.

‘I will strenuously stress again – as I have every day of my life in public office – my love and support for the people of this great state has always been the forefront of any decisions I’ve made in public life.

‘I haven’t been listening to proceedings.

‘All I will say is my love and passion for everything that is great about New South Wales remains the case. I’ve been buoyed by the public support I’ve seen.

‘Every decision I’ve taken in public life has always been in the public’s best interests, and the interests of the people of this state.

Ms Berejiklian told the Kyle and Jackie O radio show that while revealing details about her personal relationship had been ‘humiliating and embarrassing’, it had made her feel ‘more human’.

‘I’m actually starting to feel even stronger after it all… It’s made me feel more human and vulnerable than I’ve ever felt before,’ she told the breakfast show hosts.

Responding to Sandilands’ question about whether she had ever ‘dabbled’ in a same sex relationship, Ms Berejiklian said: ‘I haven’t and I didn’t. Not that there is anything wrong with that.’

Sandilands said he understood why she’d want to keep the relationship private, given ‘secret sex is the best sex’, but the premier was hesitant to comment on the intimate details of her former relationship.

Ms Berejiklian told 2GB’s Ben Fordham she lacked experience in intimate relationships after dedicating so much of her life to politics.

‘It’s fair to say that on average I would probably have less experience than the average person, but that’s an excruciating thing to talk about,’ she said.

‘It wasn’t a normal relationship, he wasn’t my boyfriend. I certainly hoped he would be, but it wasn’t sufficiently substantial. I didn’t want to introduce anyone to my close network unless I knew,’ she said.

‘I was certainly in love with him… but no, he wasn’t my boyfriend.’ 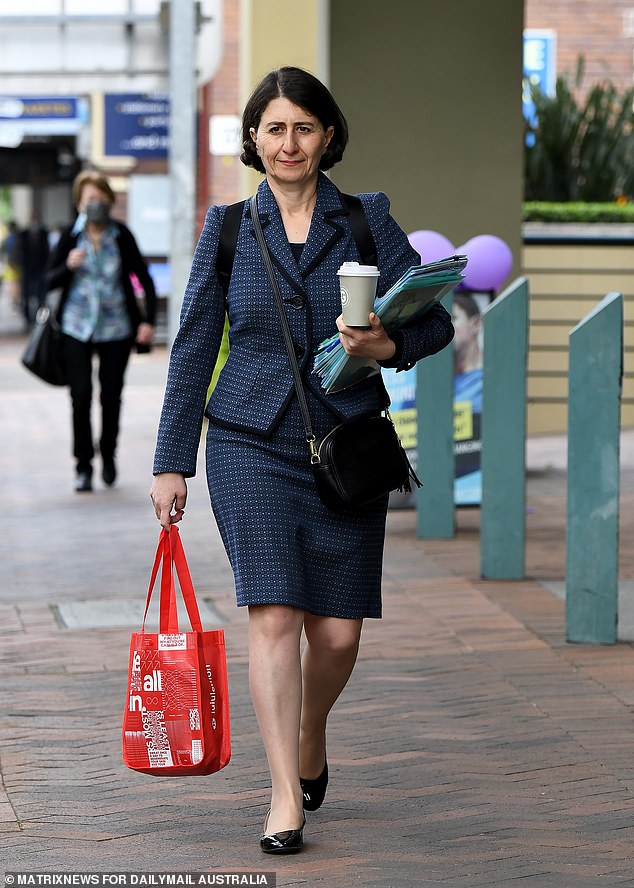 Ms Berejiklian told the Sunday Telegraph that ‘I’m still trying to process it. I feel like it’s someone else living this … It’s like I’m the main protagonist in a movie. It’s like I’m the feature and the film is going to end and my life is going to go back to normal but it will never be normal again.’

‘It was hard to define because it wasn’t of a sufficient status,’ she says ambiguously. ‘It wasn’t a traditional type of relationship.’

In a general press conference, she said ‘Without question I stuffed up in my personal life and I accept that.

‘It’s very difficult for someone in my position to have a private and personal life and I’m very upset at what has transpired. But I want to make this assurance to the people of New South Wales I have always put the public first.’

She added: ‘I want to state at the outset that had I known then what I know now clearly I would not have made those personal decisions that I did.

There was little ambiguity at ICAC yesterday, when Mr Maguire gave evidence that he and the then premier had discussed getting married and having a child.

Perhaps if Ms Berejiklian had left her words at ICAC speak for themselves and not done media interviews afterwards in an attempt to save her job as NSW premier, the public might not have found out yesterday just how close and personal her relationship with Mr Maguire actually was.