Dominic Raab today ramped up the diplomatic pressure on Russia by summoning its ambassador to protest about the ‘unacceptable’ poisoning of Alexei Navalny.

The Foreign Secretary voiced relief at news that the Vladimir Putin opponent was showing an improvement in his condition.

But the government called in Moscow’s envoy to London, Alexei Kelin, to demand a ‘full, transparent investigation’ into the apparent targeting of Mr Navalny with Novichok.

The UK has been pushing for a tough international response to the episode – which has echoes of the 2018 Salisbury attack on a former Russian spy.

Mr Navalny, the most popular and prominent opponent of President Putin, is being treated in Germany, where the authorities have confirmed he was targeted with the banned nerve agent.

The 44-year-old’s spokesman confirmed today that he had come out of an induced coma and was responsive.

The Kremlin has dismissed allegations it was involved, complaining that no evidence has been supplied by Germany. 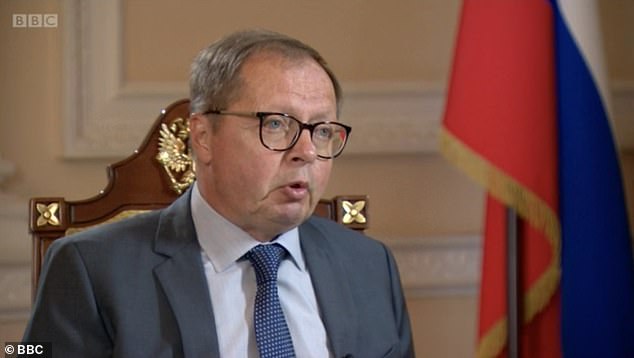 Moscow’s envoy to London, Alexei Kelin, did not speak to Mr Raab but was called in to be told there must be a ‘full, transparent investigation’ into the apparent targeting of Mr Navalny with Novichok 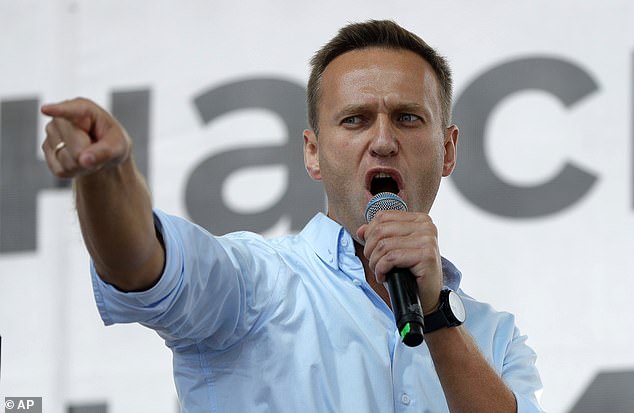 Mr Navalny, the most popular and prominent opponent of President Putin, is being treated in Germany , where the authorities have confirmed he was targeted with the banned nerve agent

Mr Raab, who did not speak to the ambassador personally, tweeted: ‘Today the UK summoned Russia’s Ambassador to the UK to register deep concern about the poisoning of Alexey @navalny.

What is Novichok and how does it kill?

The Novichok family of nerve agents were secretly developed over two decades at a research facility 50 miles outside the Russian capital.

Sometimes described as ‘gases’ they are in fact liquid, intended to be delivered as a fine spray.

A series of poisons, known as Novichok 5, 7, 8 and 9 to identify them, were produced amid conditions of complete secrecy.

They all kill the same way. By inhibiting enzymes that control nerve receptors in the brain.

One expert said victims simply ‘forget to breathe’. A tiny drop, almost undetectable, placed on the skin or inhaled can cause death within minutes.

‘It’s completely unacceptable that a banned chemical weapon has been used and Russia must hold a full, transparent investigation.

‘Relieved to hear that Alexei Navalny has been taken out of the medically induced coma. I hope his condition continues to improve.’

Corruption investigator Mr Navalny fell ill on a flight back to Moscow from Siberia on August 20 before being transferred to Berlin.

Speaking on the BBC’s Andrew Marr show yesterday, Mr Raab hit out at Russian ‘gangsterism’ as he said it was ‘difficult to believe’ the state was not involved in the poisoning.

‘I think it’s very difficult to come up with a plausible alternative explanation based on Russia’s track record … of using it – Salisbury – based on the difficulty of getting hold of, let alone deploying Novichok as it’s such a dangerous substance,’ he said.

‘The use of chemical weapons in this kind of context is pure gangsterism and Russia does have responsibility never to use it as a government, and second of all to make sure no-one else can use it within its territory.’

Last week German Chancellor Angela Merkel said Mr Navalny was the victim of ‘attempted murder by poisoning’ with Novichok and added that the aim was to ‘silence’ an opponent of Mr Putin.

However, Donald Trump hinted the US might take a softer line over the past few days, suggesting more evidence was needed.

‘It’s tragic. It’s terrible, it shouldn’t happen. We haven’t had any proof yet, but I will take a look,’ he said.

The UK has long accused Russian operatives of using the Soviet-era poison on Sergei Skripal, the former double agent targeted in the 2018 attack in Salisbury, Wiltshire.

As foreign secretary, Boris Johnson helped organise a wave of expulsions of Russian diplomats across the EU and US after Britain told 23 envoys to leave.

Mr Skripal and his daughter Yulia were two of five people exposed to the substance in Wiltshire, both spending weeks in hospital recovering.

But Dawn Sturgess, 44, of Amesbury, Wiltshire, died in July that year after coming into contact with a perfume bottle thought to originally contain the poison, while her partner, Charlie Rowley, spent nearly three weeks in hospital. 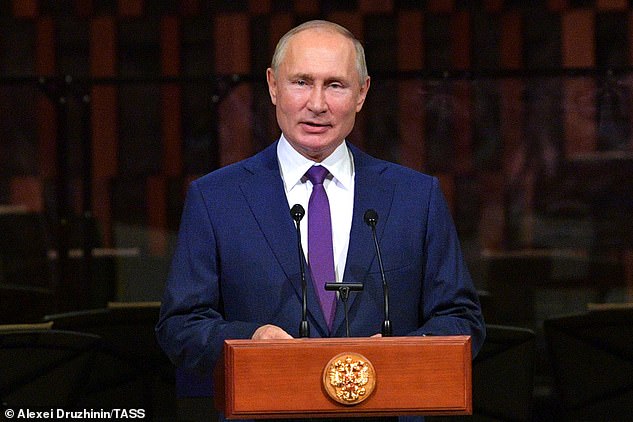