Dominic Raab’s vast colonial-era office overlooking St James’s Park is the size of a tennis court – appropriate dimensions for the most athletic member of the Cabinet, with his black belt in karate and a ferocious boxing style modelled on his hero Muhammad Ali.

As he paces the length of the room towards his desk, the Foreign Secretary bristles with political machismo when he vows that Boris Johnson will be able to defy the ‘Surrender Act’ stipulating that he must ask for a delay to Brexit if he can’t secure a deal.

Describing it as an Act ‘which requires us basically to roll over to the most punitive conditions that Brussels could inflict on us’, he says: ‘It is a shoddy bit of legislation. The way it was put together was pretty ramshackle. It didn’t have the scrutiny that you have with a Government Bill.’

Dominic Raab’s (pictured) vast colonial-era office overlooking St James’s Park is the size of a tennis court – appropriate dimensions for the most athletic member of the Cabinet, with his black belt in karate and a ferocious boxing style modelled on his hero Muhammad Ali

His implication is clear: the Government is still confident that it can find a loophole in the legislation which will allow the Prime Minister to take us out of the EU on October 31 even if he has not secured a deal.

In his exclusive interview with The Mail on Sunday, Mr Raab even hinted at the prospect of EU law being employed – for the final time – to over-ride the Act, by using the legislation under Article 50 of the Lisbon Treaty.

According to some Government lawyers, the Treaty – which enshrined the leaving date of October 31 – could be used to veto the Act passed by Labour MP Hilary Benn and fellow anti-Brexiteers.

Acknowledging the irony of the Government using EU law to leave the EU, Mr Raab, who has international law degrees from Oxford and Cambridge, says: ‘EU law has direct effect – that’s one of the reasons we’re leaving.

‘It’s a question of carefully assessing the implications. There are multiple bits of legislation that will play out.’

Mr Raab, 45, was dispatched by Boris Johnson at an early stage of the summer’s leadership contest, but his ideologically pure Brexiteer beliefs ensured that he landed the plum job in King Charles Street – and was additionally rewarded with being made First Secretary of State, the effective Deputy Prime Minister.

He is one of just four Ministers allowed to make keynote speeches at this week’s party conference, and is likely to deputise for Mr Johnson at Prime Minister’s Questions in the Commons on Wednesday when Mr Johnson will be addressing the audience in Manchester. This means he will play a key role in trying to stabilise the party after another tumultuous week in which the Supreme Court ruled against the Government’s suspension of Parliament and the Commons was in uproar over ‘inflammatory’ language. 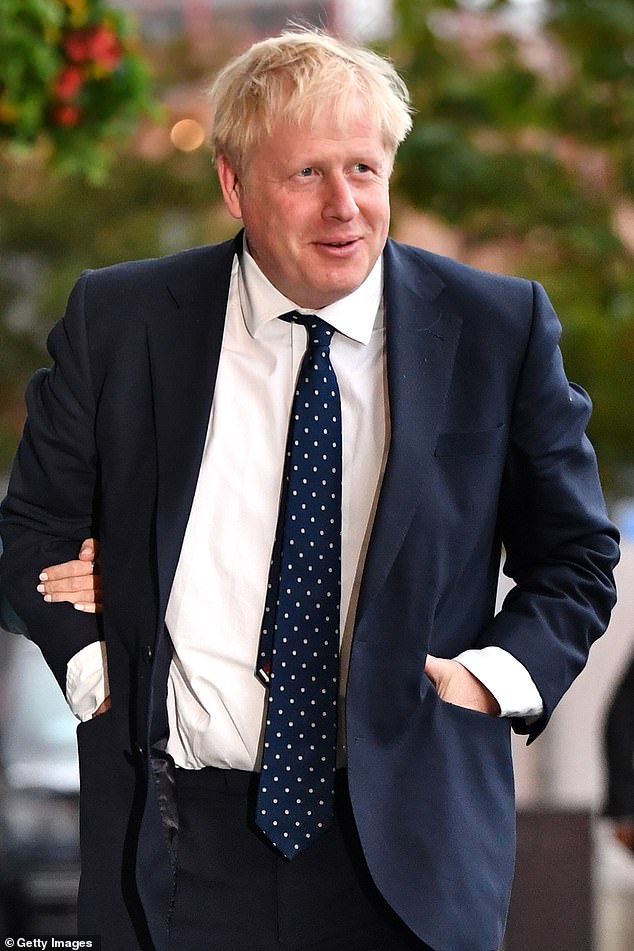 Mr Raab, 45, was dispatched by Boris Johnson (pictured) at an early stage of the summer’s leadership contest, but his ideologically pure Brexiteer beliefs ensured that he landed the plum job in King Charles Street – and was additionally rewarded with being made First Secretary of State, the effective Deputy Prime Minister

Key to settling the nerves would be an 11th-hour breakthrough in the talks with Brussels in time for the crucial summit on October 17.

The former Brexit Secretary, who resigned over Theresa May’s deal, insists that he is confident of progress, saying: ‘We have given the EU a very clear ask, we want to remove the undemocratic backstop and we need to have a transition to a best-in-class free-trade deal.

‘It now depends on the political will on the EU side. I’m confident the package we’ve got and that we put to the EU could pass through the House of Commons.’

He says the change of Prime Minister has led to a change in the negotiation dynamic.

‘I think the Cabinet is united and I think you’ve got a Prime Minister who has just got this fizz of optimism coupled with a steely resolve that we are going to get this done.

‘And so, for all the shambles in Parliament, I think the EU knows they are dealing with someone who means business. If they don’t move, if they remain stubborn and intransigent, then we will leave at the end of October come what may.’ 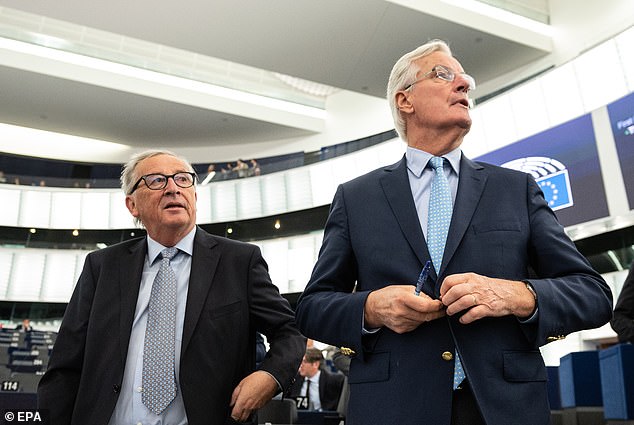 Pictured: European Commission President Jean-Claude Junker (left) and Michel Barnier, European Chief Negotiator of the Task Force for the Preparation and Conduct of the Negotiations with the United Kingdom under Article 50 of the EU (right)

If all else fails, the Government hopes that Brussels might just kick us out anyway at the end of the month. Mr Raab argues that the pro-Remain MPs ‘assume that the EU would want an extension… I think people like [French] President Macron and others are very worried about what would happen if there was another extension because they’d end up with the UK in opposition to all the EU business.

‘Why would we play nice in that scenario? So we are absolutely clear we are not going to extend.

‘But I don’t think it’s something that there is strong support for within the EU given the paralysis it would likely lead to for them.’

In his speech on Sunday, Mr Raab is expected to set out his vision of a post-Brexit ‘global Britain’ – including allowing the UK the freedom to set its own moral lines. Once out of the EU’s sanctions rules, the UK will be able, for example, to seize British assets, including houses, bought by foreign nationals guilty of human rights abuses.

He says: ‘If someone is responsible for gross human rights abuses, I don’t think they should be able to syphon their money through British banks.

‘If they have asset freezes on them I don’t think they should come and do their Christmas shopping in Knightsbridge.

‘I think that’s a good way of morally anchoring this concept of global Britain, showing we can be a force for good in the world.’

Raab: Forget Rebel Alliance, the force is with us Brexiteers too!

Remainer MPs might have been dubbed the Rebel Alliance in honour of the heroes of the Star Wars films – but now ardent Brexiteer Dominic Raab has struck back.

During his Mail on Sunday interview, the Foreign Secretary revealed his love of the franchise in the hope of ‘taking back control’ of the Brexit analogy.

He said: ‘My boys are starting to watch Star Wars so we went back and watched the original Star Wars trilogy so, of the three, I think I like Return Of The Jedi. The problem is my four-year-old now wants a Wookie for Christmas.’

In the 1983 sequel, the Galactic Empire, ruled by the ruthless Emperor Palpatine, is constructing a second Death Star in order to crush its opponents once and for all, but is thwarted by rebels including Luke Skywalker.

While Remainers such as former Chancellor Philip Hammond accepted the Rebel Alliance nickname for trying to block a No Deal Brexit, they are not the only ones laying claim to the mantle.