As stricken CNN launches a huge round of staff layoffs, newly anointed morning show host Don Lemon has caused yet more controversy after ‘mansplaining’ to his female co-hosts why men’s sports bring in more money.

The heated debate on Thursday morning, during which his CNN This Morning co-hosts Poppy Harlow and Kaitlan Collins struggled to get a word in, occurred after it was revealed the US Women’s National Soccer Team will earn more from the men’s world cup than they did from their 2019 World Cup championship.

Lemon, whose been responsible for a spate of controversial on-air statements, attempted to explain to his colleagues that the US women’s soccer team has historically earned less than their male counterparts because there is simply limited interest in their playing of the sport.

Upon receiving swift pushback from co-host Poppy Harlow, he quickly caveated his opinion with the blanket statement: ‘I’m not sexist.’

‘I grew up the only boy in a family of all women,’ he added, before recounting that when he goes to sports bars and women’s games are playing, a near-universal response from the crowd tends to be: ‘I don’t want to watch this.’ 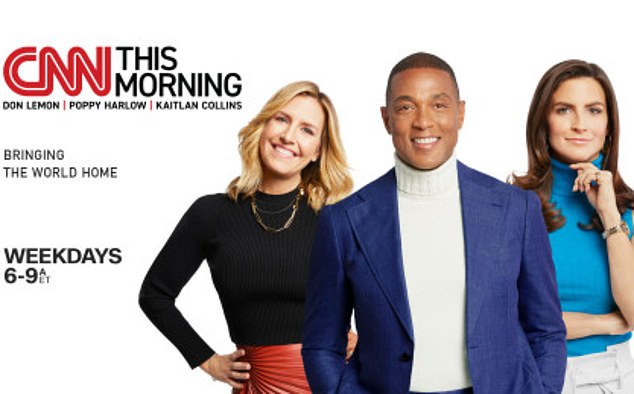 Harlow and Collins argued that women’s sports are undervalued by the entities which control advertising dollars because potential fans are not exposed to them enough for their marketing value to rise.

Collins pointed out that in some cases, including on the world soccer stage, the US women’s team have a more impressive recent record than the men.

‘The women have better skills,’ she said, as Lemon argued that women are generally worse at athletic competition and if the women’s team were to play the men’s team, they would lose.

‘I’m just being honest,’ he said, capping off the awkward segment. 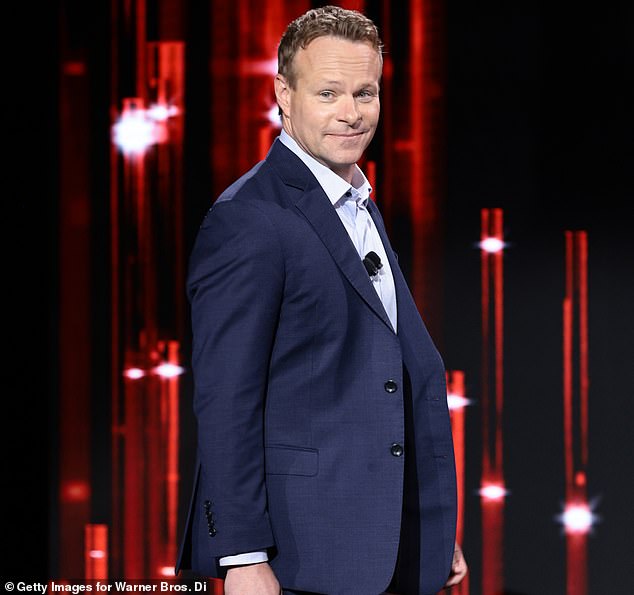 Chris Licht took over as Chairman and CEO of the network in May. He is best known as the showrunner and executive producer of The Late Show With Stephen Colbert, as well as CBS’s executive vice president of special programming 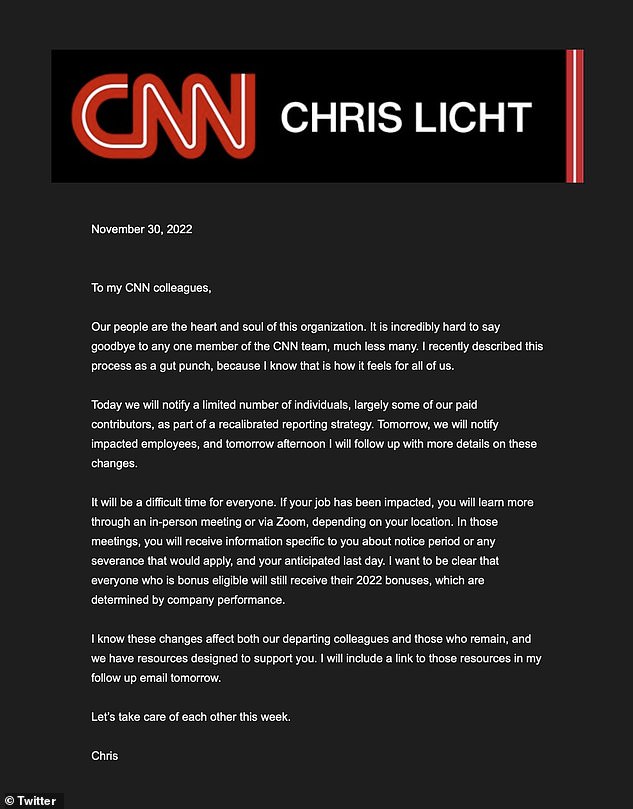 The drama came after CNN’s top boss Chris Licht informed employees that layoffs would begin on Wednesday and continue Thursday, as he lamented ‘it will be a difficult time for everyone.’

Paid contributors at the cable network were told as early as Wednesday of their termination, while full-time staffers are being told in person and on Zoom Thursday if they still have lost their job, according to an internal memo.

The layoffs are part of a cost cutting plan being executed by the cable giant’s parent company Warner Bros. Discovery.

As of Thursday morning, business casualties include HLN, a CNN-owned cable news channel, which will be gutted for parts and combined with CNN’s live programming.

When Licht took over as Chairman and CEO of the network in May 2022, he said he did not anticipate layoffs. But that changed in October when he told employees some cost-cutting measures would be taking place, which translated to a number of staff changes and dismissals.

The cuts would impact employees based in New York and Atlanta most significantly, according to a source, Variety reported. 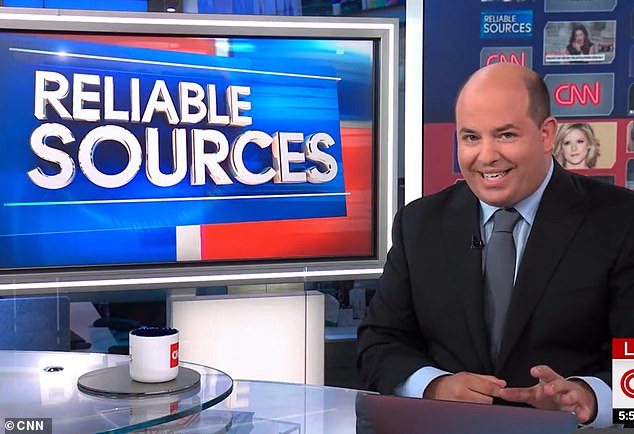 In August, Brian Stelter, chief media correspondent and host of the weekly media news show, Reliable Sources, was axed from the cable network 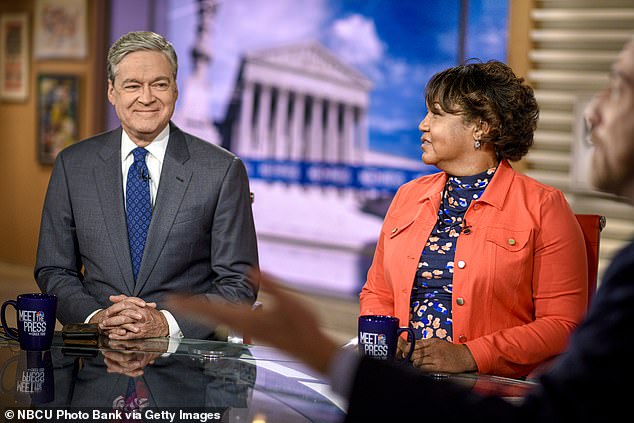 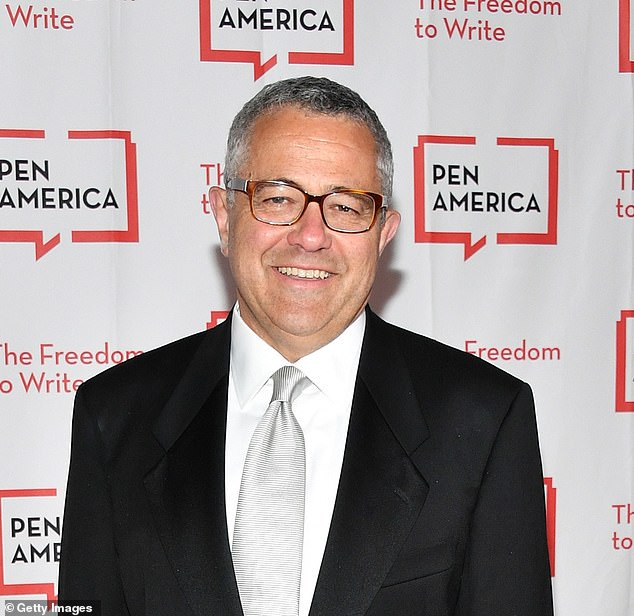 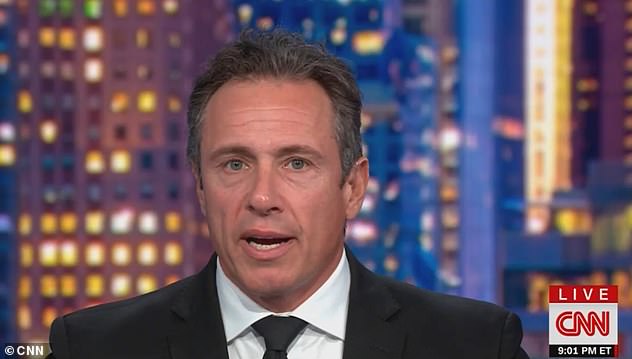 Chris Cuomo was fired from CNN in December 2021 his alleged involvement in advising his brother, disgraced New York Governor Andrew Cuomo, during his sexual harassment scandal, became too much of a liability for the network

The new boss ushered out a number of high-profile talent positioned under former network president Jeff Zucker and known to be critical of former President Trump.

His inaugural round of firings was interpreted by many as a signal he wanted to ‘de-woke’ the brand and make CNN programming appeal to centrists in the US.

That belief was bolstered in August when Brian Stelter, chief media correspondent and host of the weekly media news show, Reliable Sources, was shown the door as Licht publicly indicated he would be moving away from opinion broadcasting.

In December 2021, popular host Chris Cuomo was fired on account of a number of serious ethical breaches. Though his show had been the most-watched show on the cable network at the time of his termination, his alleged involvement in advising his brother, disgraced New York Governor Andrew Cuomo, during his sexual harassment scandal, became too much of a liability for the network.

Notably, when Licht took the helm, the highly promoted paid streaming service CNN+ was shuttered just one month after its launch, leaving many at the network concerned about the company’s future.