President Trump’s oldest son was snapped by DailyMail.com as he and sons Tristan and Spencer did their best to reel in some bass from the lawn of Mar-a-Lago.

The three men, who were joined by Vanessa and Chloe, were successful in the end, with Don Jr sharing a photo of their big catch.

‘Had a great time with trouble and trouble tonight chasing bass,’ he wrote on Instagram, showing a photo of the fish and his two smiling boys.

‘Tristan and Spencer have really gotten good at fishing and while they still need some help with the pictures these little men are on their own on almost everything else.’

Boys club: Donald Trump Jr took his son Tristan and Spencer fishing on Tuesday off the lawn at Mar-a-Lago 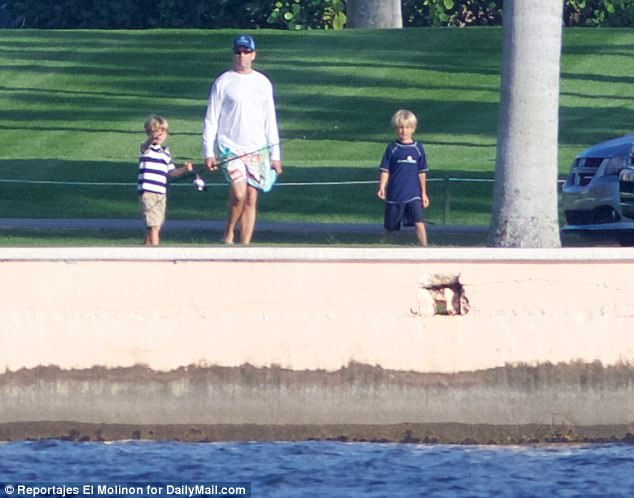 What a catch: Photos taken by DailyMail.com show the three men heading out with one fishing rod to share between them 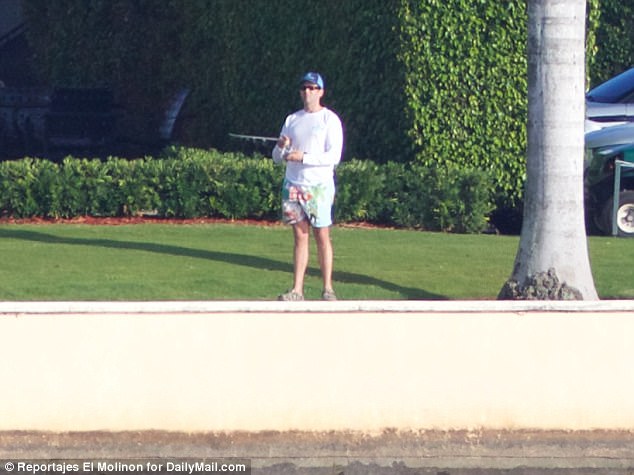 Getting reel: Don Jr cast out his rod a few times by himself before the boys joined him out on the lawn 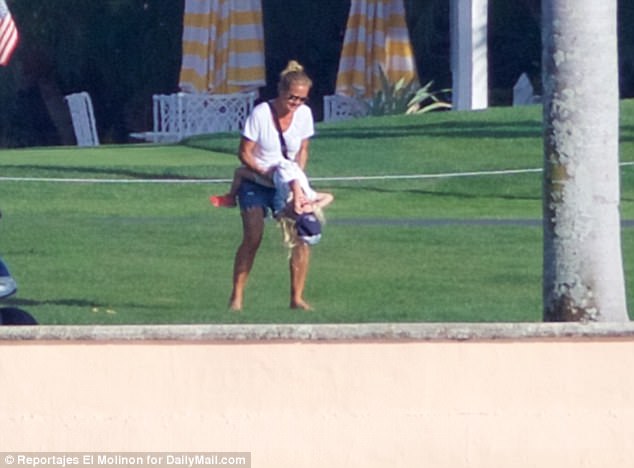 The ladies: Vanessa joined the boys as did youngest daughter Chloe 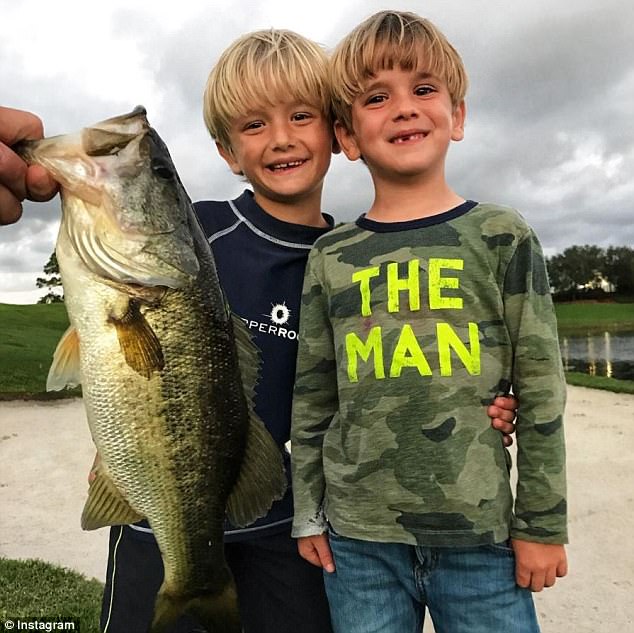 Winner: Don Jr later shared a photo of the bass they caught

It was all about family this Christmas for the Trumps, who gathered at Mar-a-Lago in Palm Beach to celebrate the holiday.

The following day Don Jr. shared a picture of daughter Chloe and son Donnie enjoying time with their great grandmother Marie Zelnickova at the private club.

Marie is the mother of Donald’s first wife Ivana, who is believed to be in Palm Beach as well this holiday.

Meanwhile, rumors of any tension between President Trump and his son-in-law Jared Kushner can be put to rest after the two men spent Christmas dinner deep in conversation alongside their wives.

Jared and wife Ivanka Trump were seen dining opposite the President and First Lady at Mar-a-Lago, where the group sat in the center of the dining room behind a velvet rope.

They were joined at the table by Tiffany Trump, Donald Jr and Vanessa with their children and President Trump’s siblings Maryanne and Robert.

Ivanka and Jared also took some time to pose with the Ivana’s mother Marie after dinner, and later noted that was celebrating her 92nd Christmas.

On Tuesday it was off to enjoy some fishing and snap a few family photos, though Ivanka’s attempts at a picture perfect outing soured when Jared and  son Joseph got photobombed by a Confederate flag in one image.

‘To any kid, this fish is a trophy!’ wrote Ivanka on the series of photos she posted after the group’s fishing trip.

They could be seen surrounded by at least two Coast Guard patrolers as well as a boat that had a US flag and a Confederate flag.

President Trump also enjoyed some rest and relaxation on Tuesday as he headed off to enjoy some golf.

It was an odd decision, especially since on Monday he tweeted: ‘I hope everyone is having a great Christmas, then tomorrow it’s back to work in order to Make America Great Again (which is happening faster than anyone anticipated)!’

Donald Jr and Eric were also seen in images from Christmas night, with Don Jr. posting a family shot after dinner of himself and wife Vanessa with their five children.

‘Merry Christmas to you and yours from our family. May your day be as joyous as anyone could possibly hope for. #merrychristmas #christmas #family #traditions #family #familytime,’ he wrote on Instagram. 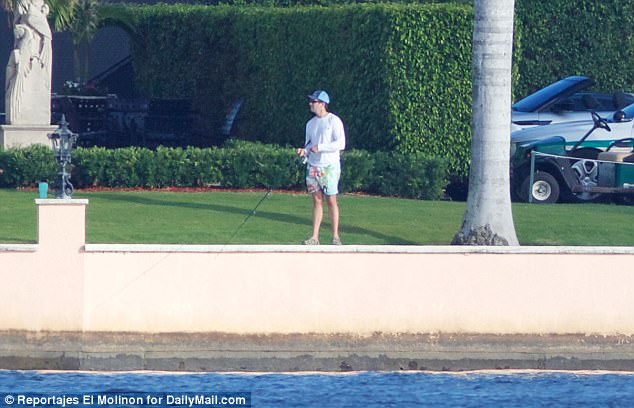 Eric meanwhile was seen in an image with wife Lara, their baby son and two dogs while in North Carolina with her family.

This is Tiffany’s first holiday in Palm Beach, having gone to Georgia with mom Marla Maples in 2016 and Idaho the prior year.

Marla has been posting photos of herself while spending the holiday with friends in Montana, and even shared a throwback nap of her and Tiffany when they were both children.

She also shared one of Tiffany and Ivanka from Christmas during the time she was married to Donald.

It was all about family this Christmas for the Trumps, who gathered at Mar-a-Lago in to celebrate the holiday.

The following day Don Jr. shared a picture of daughter Chloe and son Donnie enjoying time with their great grandmother Marie, whose daughter Ivana is believed to be in Palm Beach as well this holiday.

President Trump made a very concerted effort to wish everyone a ‘Merry Christmas’ on Monday, tweeting the phrase three times in less than 12 hours on Sunday and Monday.

He then wrote a simple ‘Merry Christmas’ at midnight and 8am on Monday.

President Trump released a Christmas message on Monday as well, posting a video to twitter in which he stated: ‘In the season of joy, we spend time with our families, we renew the bonds of love and goodwill between our citizens and most importantly we celebrate the miracle of Christmas.

‘For Christians we remember the story of Jesus, Mary and Joseph that began more than 2,000 years ago. As the book of Isaiah tells us, for to us a child is born, to us a son is given and the government will be on his shoulders and he will be called Wonderful Counselor, Mighty God, Everlasting Father, Prince of Peace.

‘This good news is the greatest Christmas gift of all, the reason for our joy and the true source of our hope.’