President Donald Trump went back to referring to the coronavirus as the ‘kung flu’ at a campaign rally inside a church in Phoenix Tuesday after the White House rejected complaints about the racist phrase.

Trump trolled his critics by running through the long list of names for the virus that has killed 120,000 Americans, including calling it the ‘China virus,’ a term he briefly eschewed.

He made the comments inside the Dream City megachurch.

‘I said the other night, there’s never been anything where they have so many names. I could give you 19 or 20 names for that right?’ Trump said to cheering young supporters, days after using the term at his Saturday night rally in Tulsa.

‘It’s got all different names. Wuhan. Wuhan is catching on. Coronavirus, right? Kung Flu, yeah?’ said President Trump, once again using the term ‘Kung-flu’ to refer to the virus 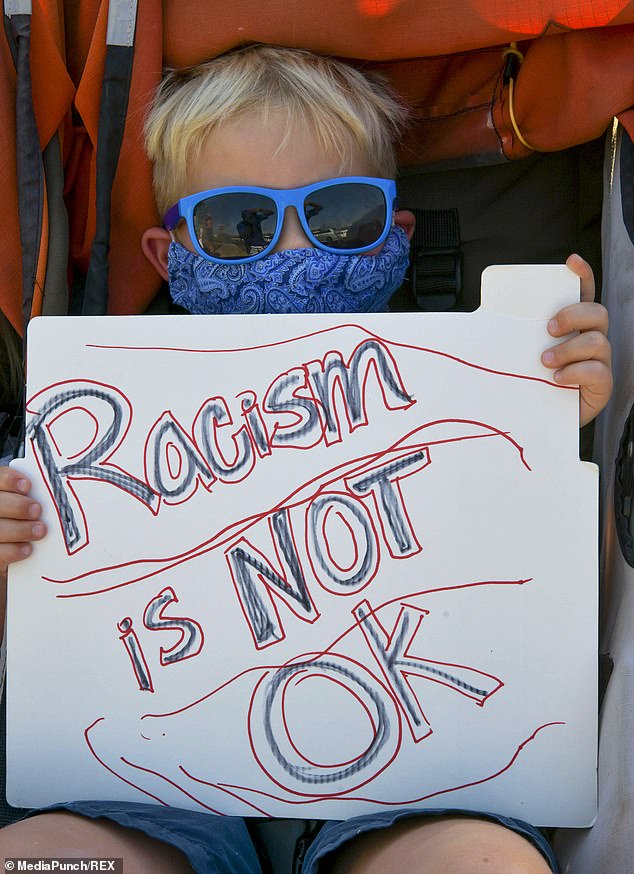 The line earned cheers from the roughly 3,000 supporters who filled the church in north Phoenix.

Trump kept repeating the phrase, a day after White House press secretary Kayleigh McEnany fended off questions about why Trump would use it. 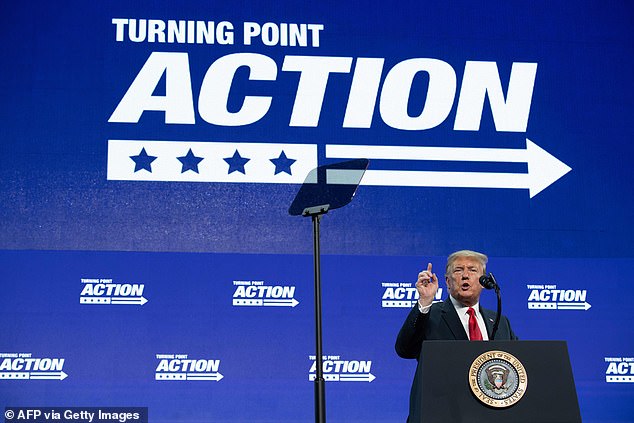 Trump spoke at the Dream City Church in Phoenix 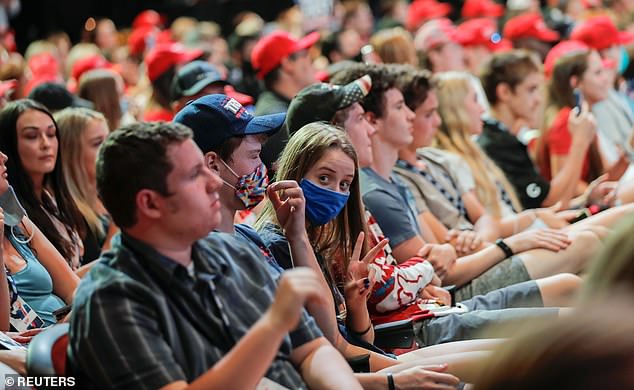 Trump spoke to about 3,000 people who tightly packed the church 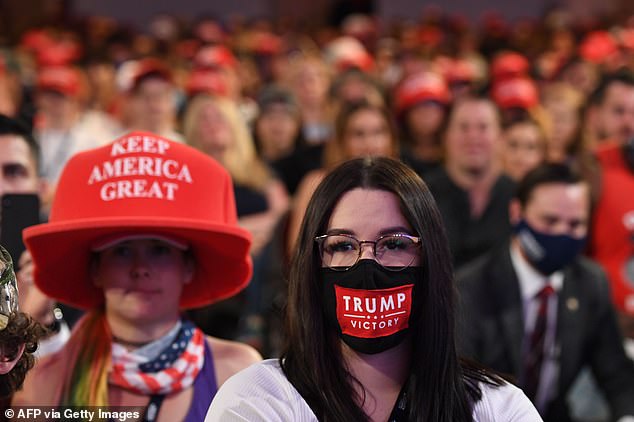 Many young attendees wore hats, and some wore masks amid the coronavirus outbreak 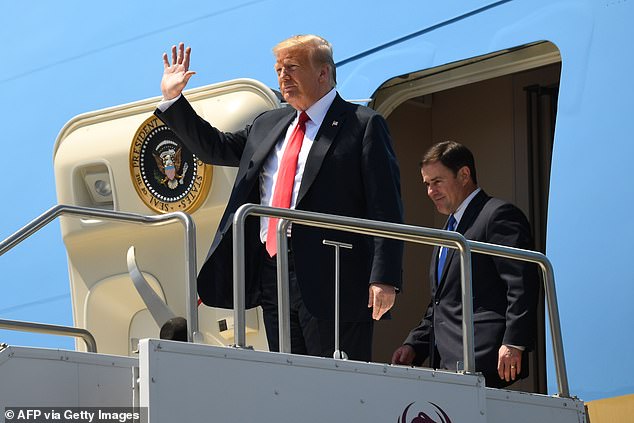 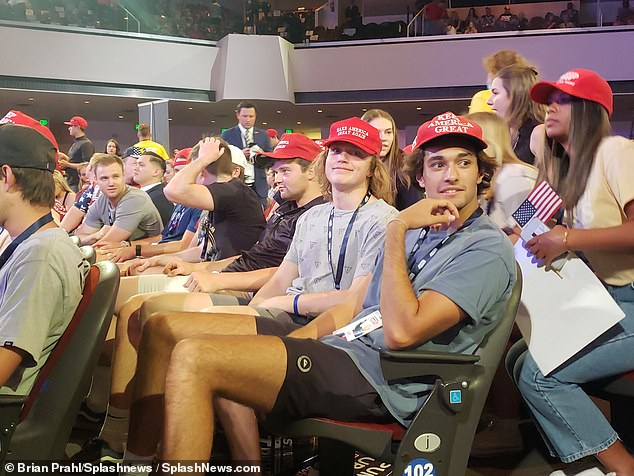 Trump drew cheers when he made his ‘Kung-flu’ remark 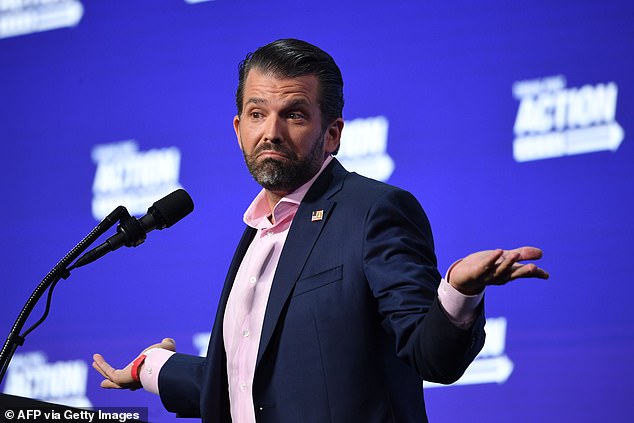 China has protested the use of the term. Scientists believe the virus mutated and jumped from animals to humans near the Chinese city of Wuhan.

Trump also called out White House press secretary Kayleigh McEnany, who on Monday defended his use of the term, and said Trump doesn’t consider it racist.

‘The president does not believe that it is offensive to note that this virus came from China,’ she said.

Trump also blasted China for taking advantage of the U.S., but touted a deal where it agreed to buy U.S. farm products – which former national security advisor John Bolton charges came after Trump pleading for China to help his campaign.

‘The ink wasn’t dry when the plague flu in,’ Trump said, saying the ‘long, slow surrender’ was over.

Later in the rally, Trump brought up a young supporter who complained that ‘Aunt Jemima was cancelled,’ in referenced to Quaker’s decision to pull the branding last week, saying it was based on a ‘racial stereotype.’

‘The original first Aunt Jemima was the picture of the American dream,’ said Reagan Escude, who Trump introduced as a student at Northwestern State University of Louisiana. ‘She was a freed slave who went on to be the face of the pancake syrup that we love and we have in our pantries today.’

‘And now the leftist mob is trying to erase her legacy,’ she said. Trump said she had stood up for ‘Christian values’ instead of bowing to ‘political correctness.’

Trump’s play on the name was similar to his routine in Tulsa. ‘It has more names than any disease in history. I can name kung flu. I can name 19 different versions of names,’ Trump said.

Trump was reportedly furious that the event had only 6,200 people at a venue that held 19,000, who he said Tuesday he was thrilled with the TV audience.

In Phoenix, the indoor venue was mostly filled.

Crowd members chanted out ‘Four More Years’ after earlier chanting ‘Lock Her Up,’ a stand-by from Trump’s 2016 campaign in reference to Hillary Clinton.

Earlier, Trump tore into Barack Obama during a campaign rally in Phoenix after the former president helped raise a startling $7.6 million for Joe Biden in a single online fundraiser.

‘Today he’s with Obama – President Obama,’ Trump told young supporters at a megachurch in Phoenix. Then he started ripping Obama for staying out of the Democratic primary.

‘It only took him how long a year and a half to endorse him,’ Trump said. ‘He’s fighting for Sleepy Joe,’ Trump said, using his insult for Biden. ‘So strongly he wanted everybody to win but Joe,’ Trump claimed.

Then he looked back to 2016, when Trump defeated former Secretary of State Hillary Clinton after building up his brand claiming without evidence that Obama wasn’t born in the United States.

‘In my campaign, he fought harder than crooked Hillary,’ Trump said – although days ago he complemented Clinton’s energy in an interview with the Wall Street Journal.

‘He said you cannot let him win,’ Trump said of Obama.

‘He was all over the place. This guy’s spending all his time campaigning against me. Uh, who won? That’s right,’ Trump said.

Obama campaigned for Clinton across swing states in the final weeks of the campaign, warning voters not to be ‘bamboozled’ by Trump.

‘Don’t forget, I’m only here because of him and Biden,’ Trump said, tying Obama to his presumed opponent.

‘I’m only here because of them because if they did a good job, we wouldn’t have been here,’ Trump said.

Trump appeared days after visiting Tulsa to a disappointing crowd of just 6,200 in an arena that filled 19,000 amid the coronavirus outbreak. The pastor and a top official said in a video the church’s ‘ionization’ air filtration system killed ‘99.9 per cent’ of the coronavirus.

Young supporters sat closely together in chairs and Make America Great Again hats, with most eschewing masks on a day Dr. Anthony Fauci warned about ongoing risks of the outbreak.

Trump repeatedly swung at the left and blasted protesters who tried to take down a statue of Andrew Jackson in front of the White House.

‘We will never surrender to mob violence,’ he said. He touted the border wall, which he visited earlier, and ‘law and order.’

‘They are vicious people,’ he said of opponents who have taken to the streets. ‘Anyone who dissents from their orthodoxy must be punished canceled or banished. You’re the courageous warriors standing in the way of what they want to do,’ he said. ‘They hate everything we prize as Americans,’ he said.