Donald Trump claims U.S. would have fewer coronavirus cases if it stopped testing

President Donald Trump blamed a rise in coronavirus cases on the increased testing being done, saying if it stopped, ‘we’d have very few cases, if any.’

‘If we stop testing right now, we’d have very few cases, if any,’ Trump said at a roundtable discussion on the health of America’s seniors at the White House.

At least 17 states across the U.S. – mostly across the South – have seen COVID-19 infections surge in the last week as states begin the reopening process.

Six states have seen infection rises of more than 50% compared with the previous week, including Oregon, Montana, Wyoming, Alabama, South Carolina and Hawaii.

No states saw falls of more than 50% when compared with the previous week.

These President Trump argued that ‘testing a double edged sword’ that makes the country ‘look bad’ but is ‘good to have.’

‘Our testing is so much bigger and more advanced than any other country (we have done a great job on this!) that it shows more cases. Without testing, or weak testing, we would be showing almost no cases. Testing is a double edged sword – Makes us look bad, but good to have!!!,’ he tweeted Monday morning. 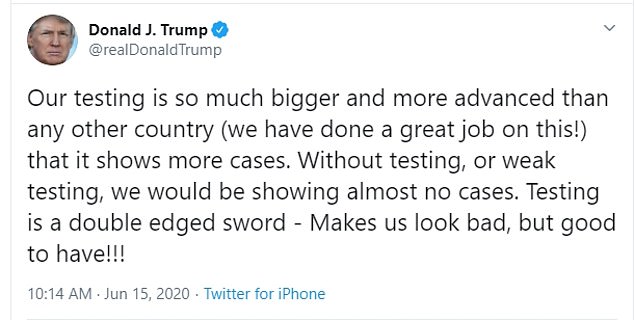 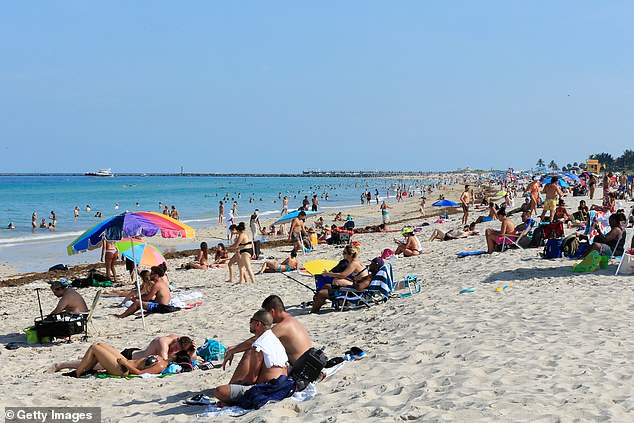 At least 17 states across the U.S. – mostly across the South – have seen COVID-19 infections surge in the last week as states begin the reopening process

Trump will hold a campaign rally, his first since March, in Tulsa on Saturday.

The president dismissed concerns, saying one of the reasons Tulsa was chosen was because of the governor’s work combatting the coronavirus.

‘Oklahoma is at a very low number. They have done really fantastic work,’ he said.

In Louisiana, which had been one of the earlier virus hot spots, new cases were again on the rise with over 1,200 – the most there since May 21.

Nationally, there were over 25,000 new cases reported on Saturday, the highest tally for a Saturday since May 2, in part due to a significant increase in testing over the past six weeks.

In total, more than 115,000 Americans have now died of COVID-19 and two million have been infected.

President Trump has pushed states to reopen and restart their economies. He is banking his reelection campaign on having a strong economy.

Many state health officials partly attribute the increase to gatherings over the Memorial Day holiday weekend in late May. Others say the increase in cases is due to more robust testing.

Experts have for weeks been raising concerns that the reopening of the U.S. economy could lead to a fresh wave of infections.

Many of the states that have seen increases in cases are also seeing record hospitalizations – a metric not affected by increased testing and perhaps more troubling for health officials.

Arkansas, North Carolina, Texas and Utah all had a record number of patients enter the hospital on Saturday. In South Carolina, 69 percent to 77 percent of hospital beds are occupied in various regions.

Vice President Mike Pence said the number of hospitalizations are down.

‘Where we saw coronavirus positive cases six weeks ago over 30,000 now,’ Pence said, saying it is down to ‘roughly 20,000 new cases a day. As I said, the positivity rate remains flat. Hospitalizations for coronavirus are declining all over the country.’

It comes after Dr Anthony Fauci, the top infectious disease expert in the US, cautioned last week that the ‘blips’ of rising coronavirus hospitalizations being reported by some states could get out of control if robust contact tracing regimes are not put in place.

He said the US was bound to see infections increase as restrictions on economic activity were lifted.

‘But when you start seeing more hospitalizations, that’s a sure fire sign that you’re in a situation where you’re going in the wrong direction,’ Fauci told CNN.

Fauci said increased hospitalizations was a worrying trend and a sign that ‘maybe we need to slow down a little’ on reopenings.

He also told ABC News the best way of spreading the coronavirus was to avoid congregating in large groups.

The ‘best way that you can avoid — either acquiring or transmitting infection — is to avoid crowded places, to wear a mask whenever you’re outside. And if you can do both, avoid the congregation of people and do the mask, that’s great,’ he told ABC News Chief White House Correspondent Jonathan Karl on the ‘Powerhouse Politics’ podcast.

‘If you’re going to be in a situation where — beyond your control there’s a lot of people around you — make sure you wear a mask,’ he advised.

The Centers for Disease Control and Prevention also weighed in on Friday, telling reporters that large gatherings that involve shouting, chanting or singing should ‘strongly encourage’ attendees to use cloth masks.

But the officials noted this was not directed specifically at any of President Trump’s events or the protests – it was just general advice.

‘They are not regulations, they are not commands, but they are recommendations or even suggestions … to be able to have a gathering that will keep people as safe as possible,’ said Jay Butler, the CDC’s deputy director for Infectious Diseases. 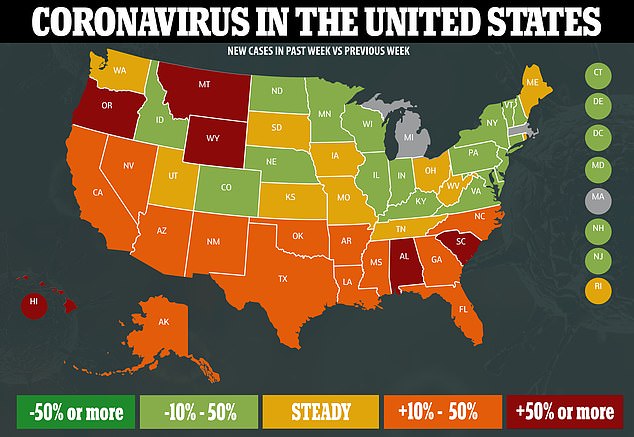 At least 17 states across the US have seen COVID-19 infections surge in the last week as record numbers of new cases and hospitalizations continue to sweep through the likes of Florida , Texas and Alabama 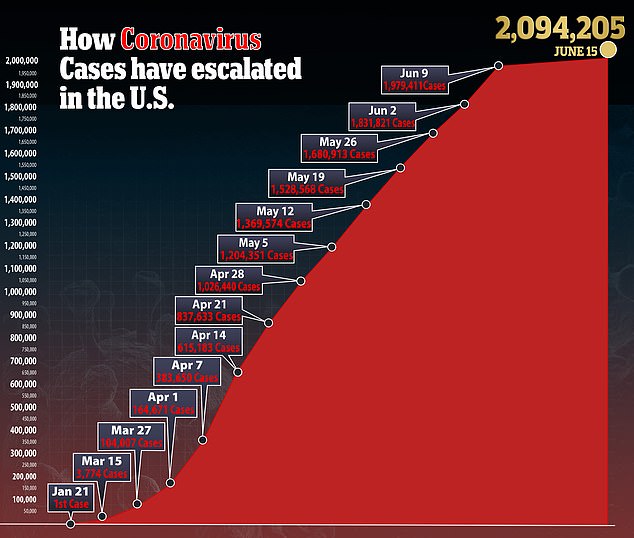 A handful of states and cities have now paused or slowed reopenings due to increases in cases.

Oregon Governor Kate Brown said she would put county applications to reopen on hold after the state reported a record daily rise in new coronavirus cases on Thursday.

‘This is essentially a statewide ‘yellow light,’ it’s time to press pause for one week before any further reopening,’ Brown, a Democrat, said in a statement.

Utah’s Republican Governor Gary Herbert on Friday ordered most of the state to halt reopening while it investigated a jump in cases.

‘I don’t want to go forward and then take a step backward,’ Herbert said of the order that remains in effect until June 26.