Donald Trump delivers his first State of the Union Address

President Donald Trump celebrated the ‘incredible progress’ and ‘extraordinary success’ that his administration has made in the year since he took office as he began his State of the Union address on Tuesday.

Trump held up the GOP’s tax cut legislation a major milestone, praising companies like Apple and ExxonMobile that are expanding and investing as a result of the break.

And he asked for applause for Republicans’ party-line repeal of his predecessor’s namesake legislation as a part of the same tax-cut program, saying ‘We repealed the core of the disastrous Obamacare. The individual mandate is now gone.;

‘This is in fact our new American moment. There had never been a better time to start living the American Dream,’ Trump declared from the House chamber.

Trump called on lawmakers to ‘set aside our differences’ and to ‘seek out common ground’ in the speech in which he called on elected officials to ‘summon the unity we need to deliver for the people.’

‘We have faced challenges we expected, and others we could never have imagined. We have shared in the heights of victory and the pains of hardship,’ Trump said in the remarks to a joint session of Congress. ‘We have endured floods and fires and storms. But through it all, we have seen the beauty of America’s soul, and the steel in America’s spine.’

U.S. President Donald Trump listens to applause as he prepares to give his first State of the Union speech 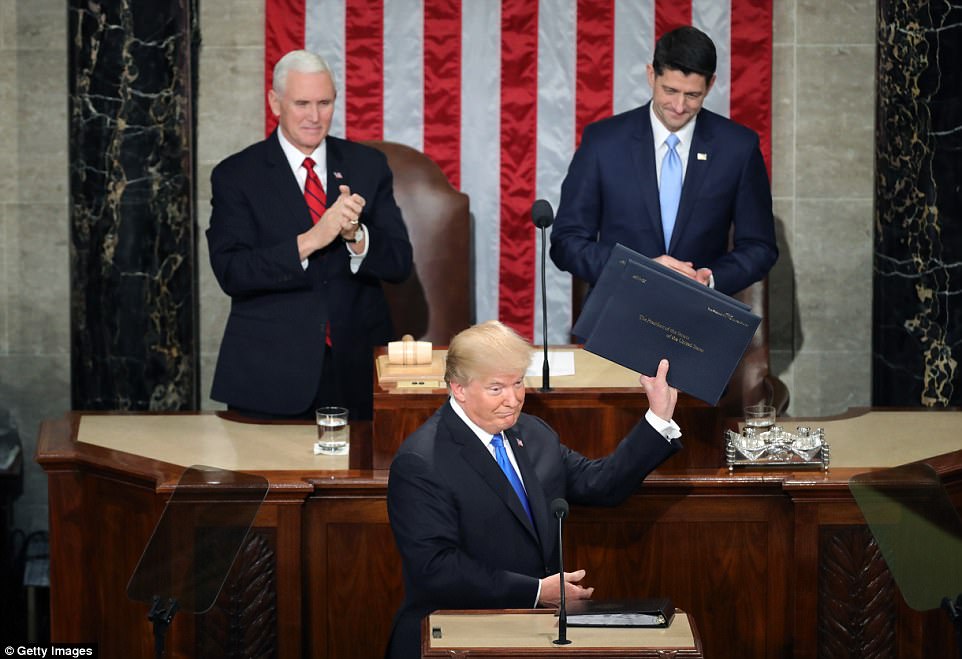 Trump holds up his speech as US Vice President Mike Pence (left) and Speaker of the House US Rep Paul Ryan look on during the State of the Union address in the chamber of the U.S. House of Representatives 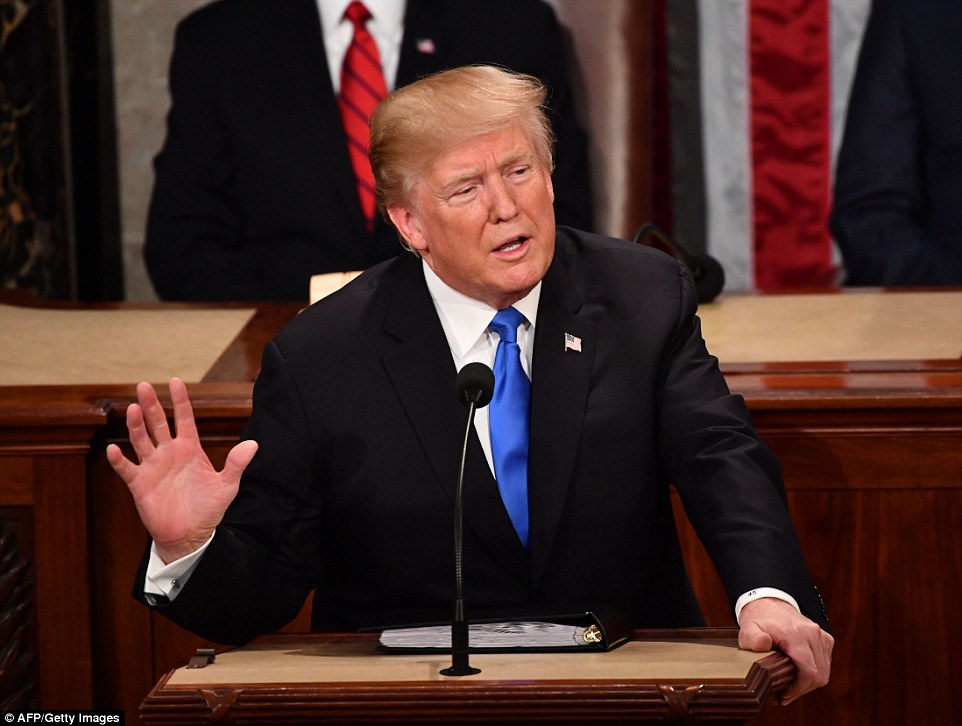 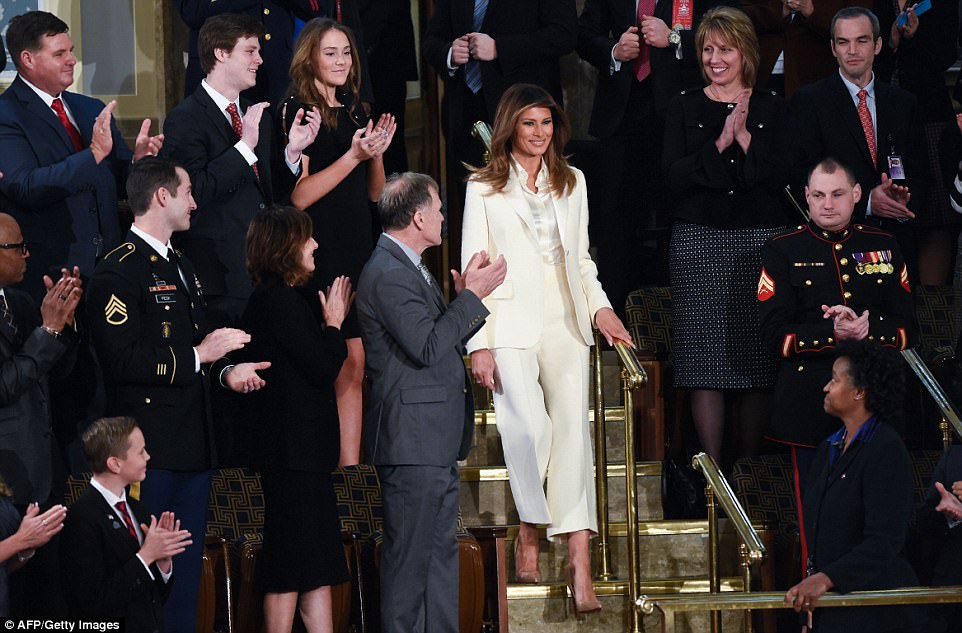 The president’s youngest son Barron stayed behind and his wife, Melania (pictured arriving at the Capitol), traveled to Capitol Hill ahead of him to greet her guests 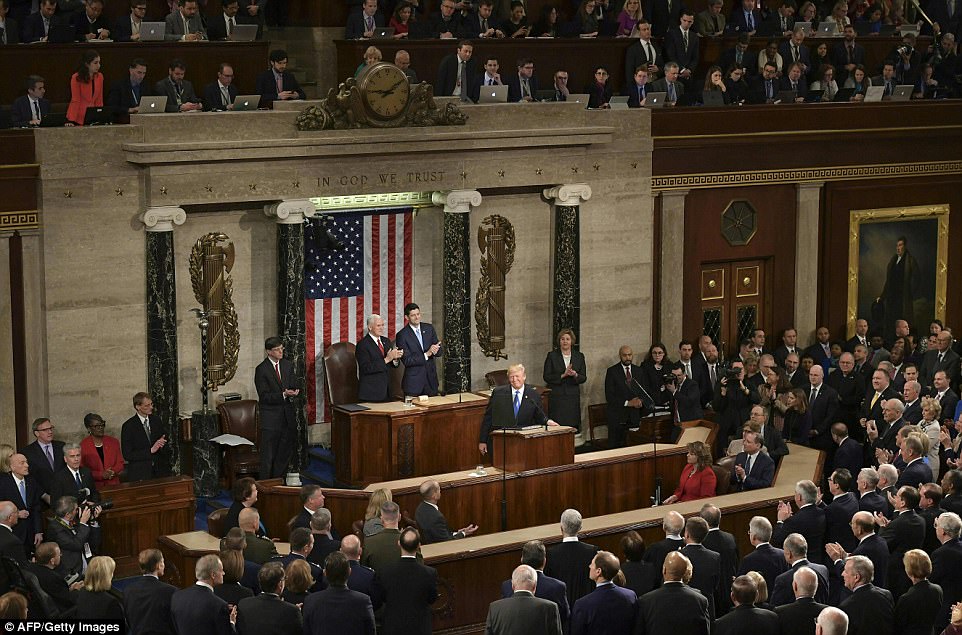 The president was joined in the House of Representatives tonight by his wife, Melania, and his adult children. His youngest son, Barron, stayed behind.

But President Trump was not alone in his motorcade as he made the ride across town, with his chief of staff, John Kelly, joining him in an outfitted limousine known as the Beast.

The first lady entered the gallery of the House of Representatives as her husband was en route – stunning attendees with a creme suit and silk blouse.

Moments later the president’s Cabinet entered the room. They were followed by Trump himself and GOP leaders.

The president shook the hands of Republican lawmakers crowding the aisle to reach him, including Kansas’ Kevin Yoder and Texas’ Louie Gohmert. He greeted Supreme Court justices and gave Chairman of the Joint Chiefs of Staff Joseph Dunford a pat on the shoulder.

Trump was also seen greeting Democratic Sen Dick Durbin, whom he’s been feuding with over a claim that he called Haiti and African nations ‘s***hole countries’ in a private meeting with legislators.

In the remarks that are expected to consume 60 minutes of prime time programming, Trump called for a ‘new American moment’ of unity and bipartisanship, selling his 2017 tax-cut success and arguing for his administration’s tranche of immigration goals.

‘There has never been a better time to start living the American dream,’ the president said. 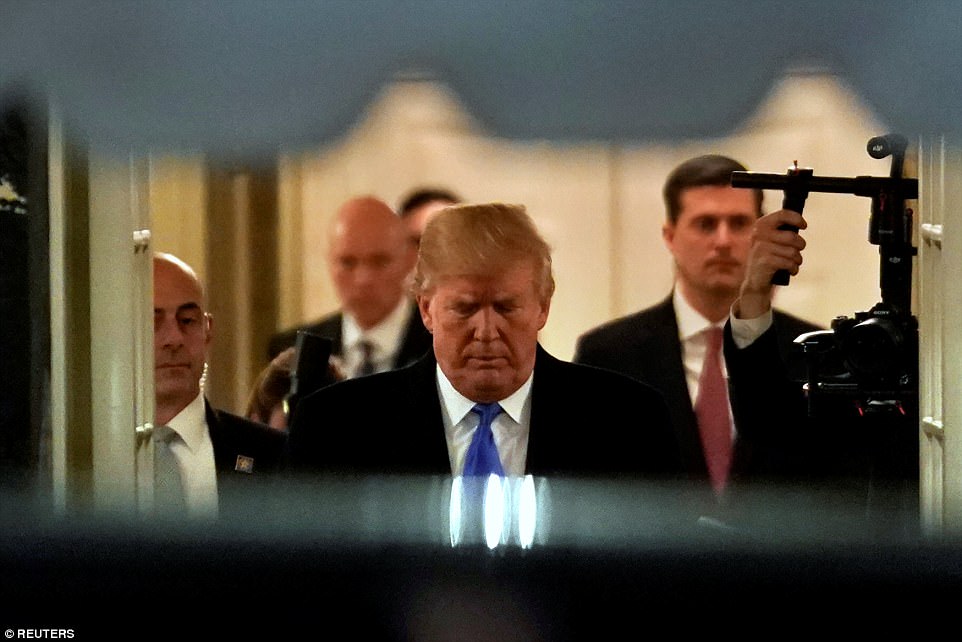 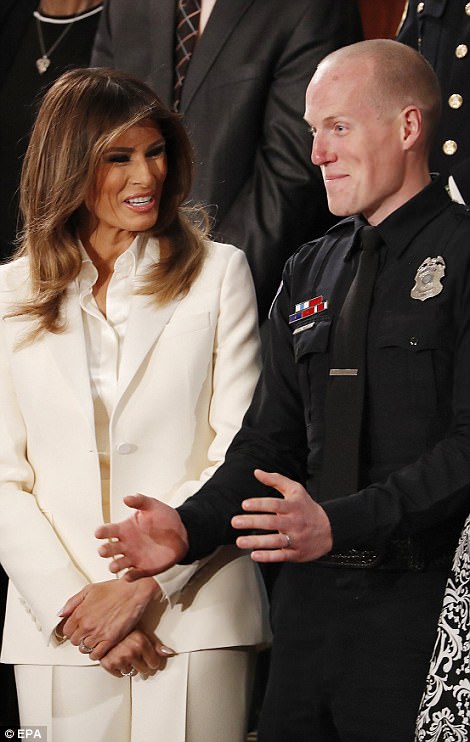 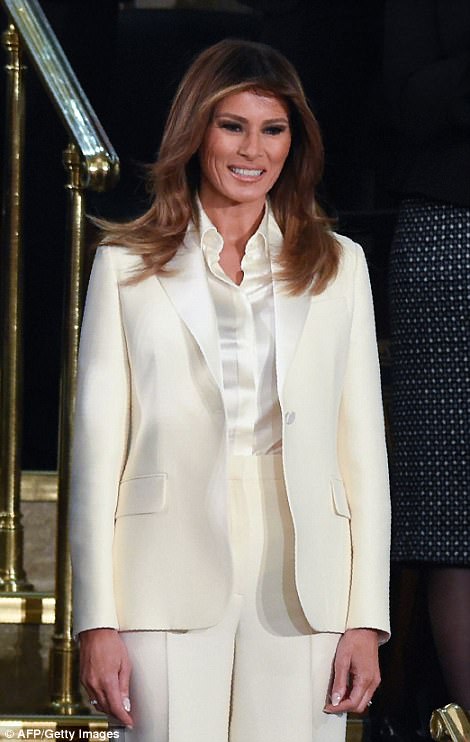 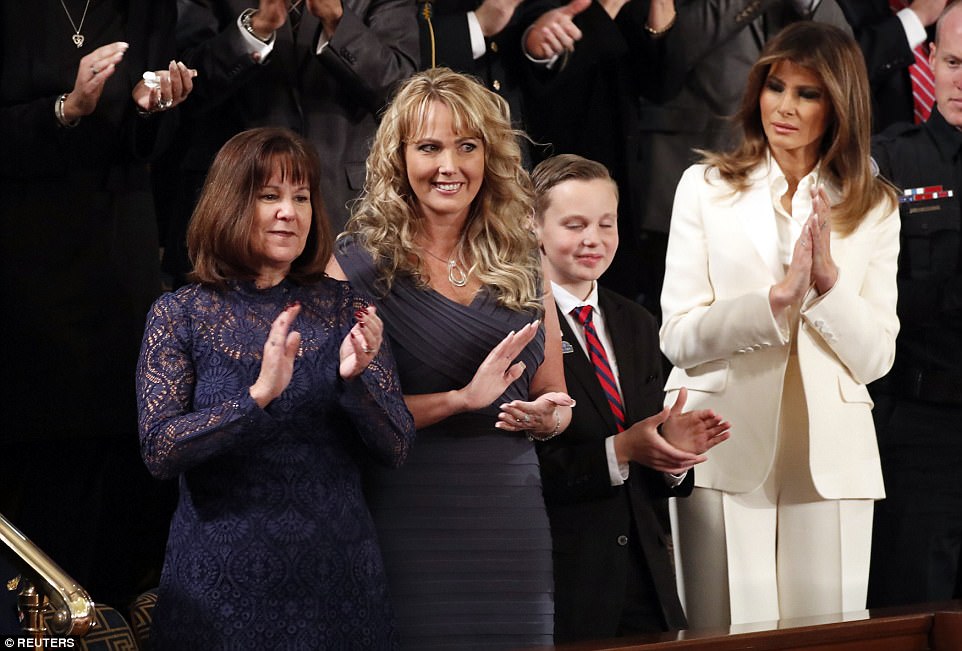 As Trump headed to the Capitol his adult children were already gathering on Capitol Hill, but so too were black-clad Democratic women trying to hitch a ride on the MeToo movement.

In what he has called an unexpected dividend of the cash infusion that businesses will see as a result of a lower tax rate, both large and small companies distributed end-of-year bonuses – a point Trump will drive home.

‘Roughly 3 million workers have already gotten tax cut bonuses, many of them thousands of dollars per worker,’ he said, taking credit for ‘the biggest tax cuts and reform in American history’.

As the president prepares to cut a deal over immigration policy with Democratic lawmakers, he will frame his proposals as humanitarian efforts. 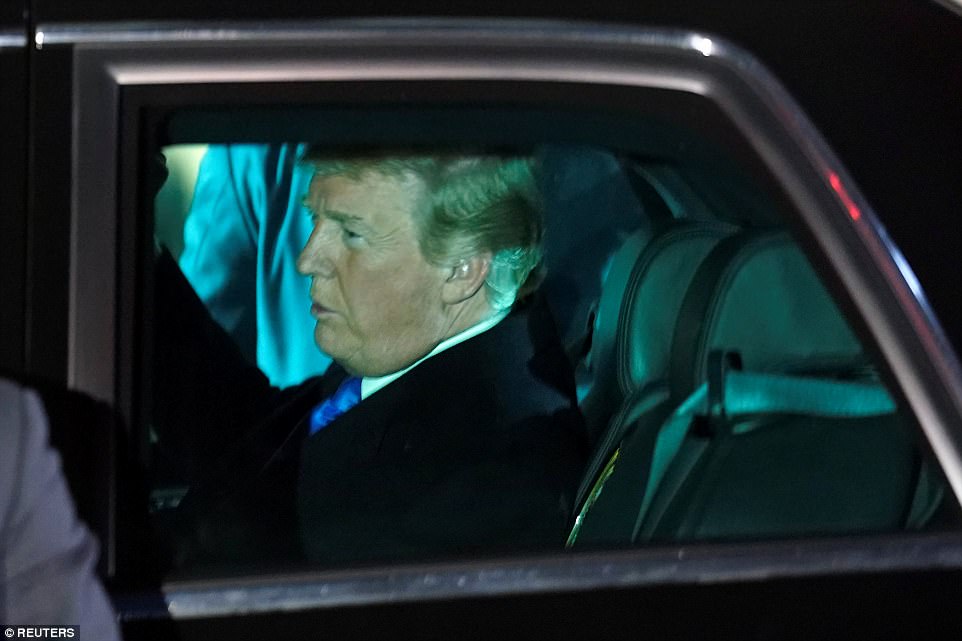 But Trump was not alone in his motorcade, with his chief of staff, John Kelly, joining him in the presidential limousine known as the Beast 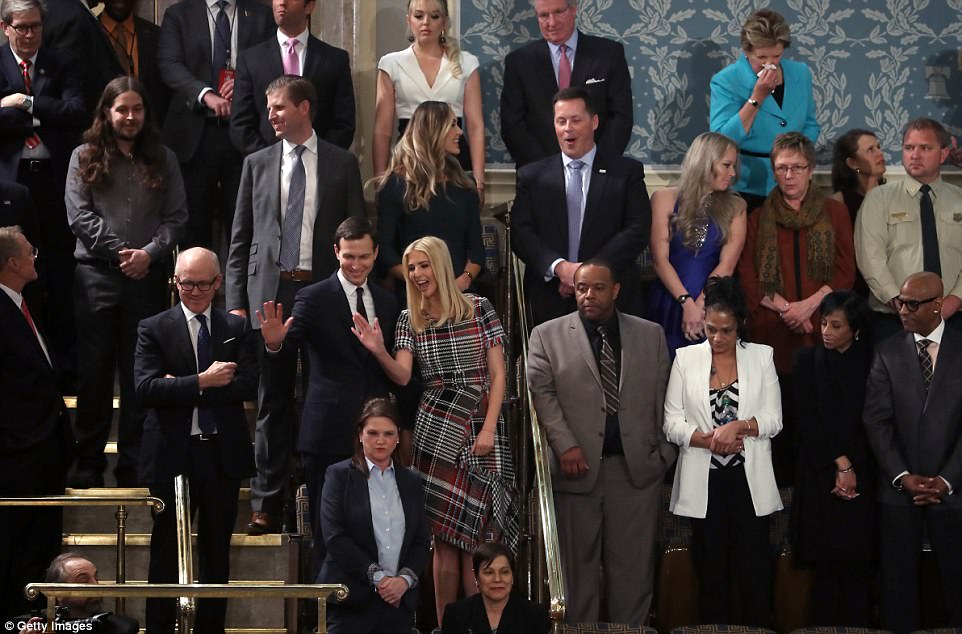 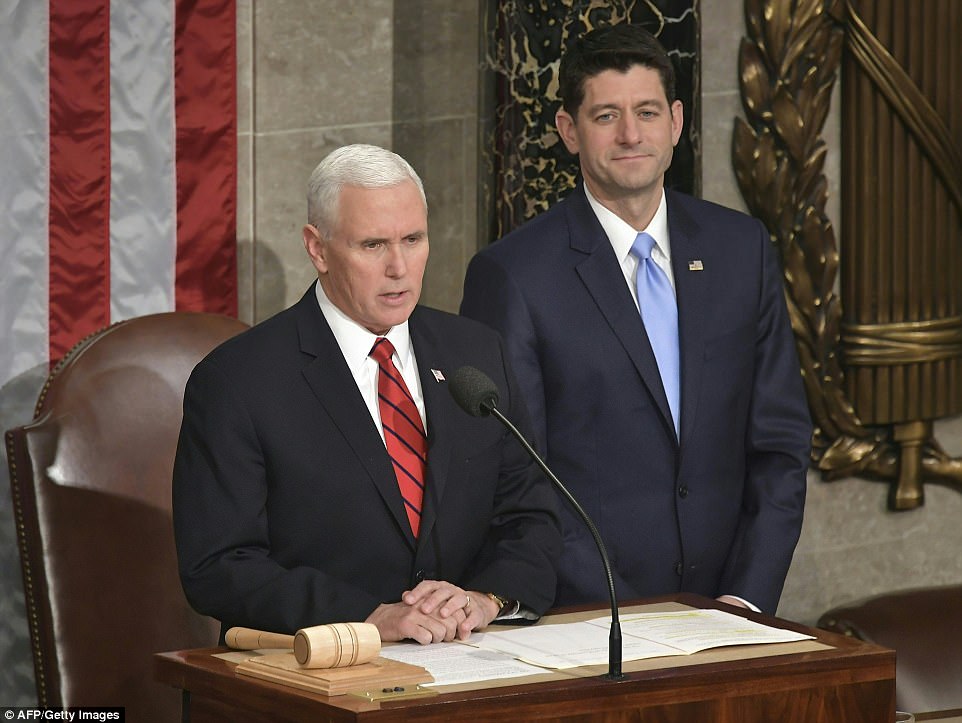 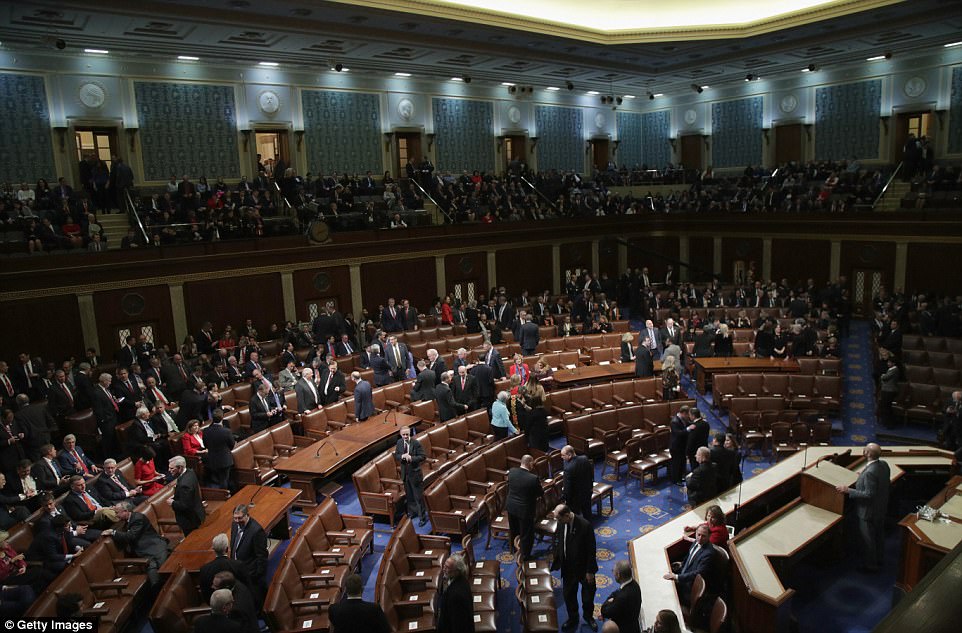 But administration officials told Bloomberg that there would be scant mention of specifics.

Trump won’t emphasize that his call for comity applies equally to his plan to save the DACA program in exchange for more robust border security, including a border wall.

‘Struggling communities, especially immigrant communities,’ he will say, stand to benefit from a tighter job market as fewer illegal immigrants are included in employment markets.

Trump will claim his immigration policies ‘focus on the best interests of American workers and American families.’

The president also is expected to avoid any mention of the Russia ‘collusion’ investigation that has roiled the White House for most of the last year, one that he has publicly called a ‘witch hunt.’ 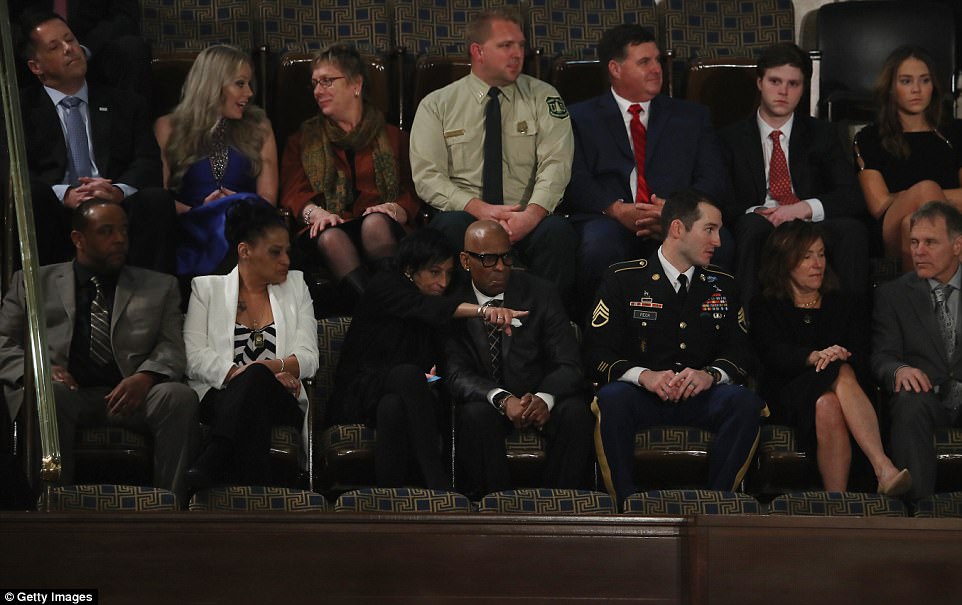 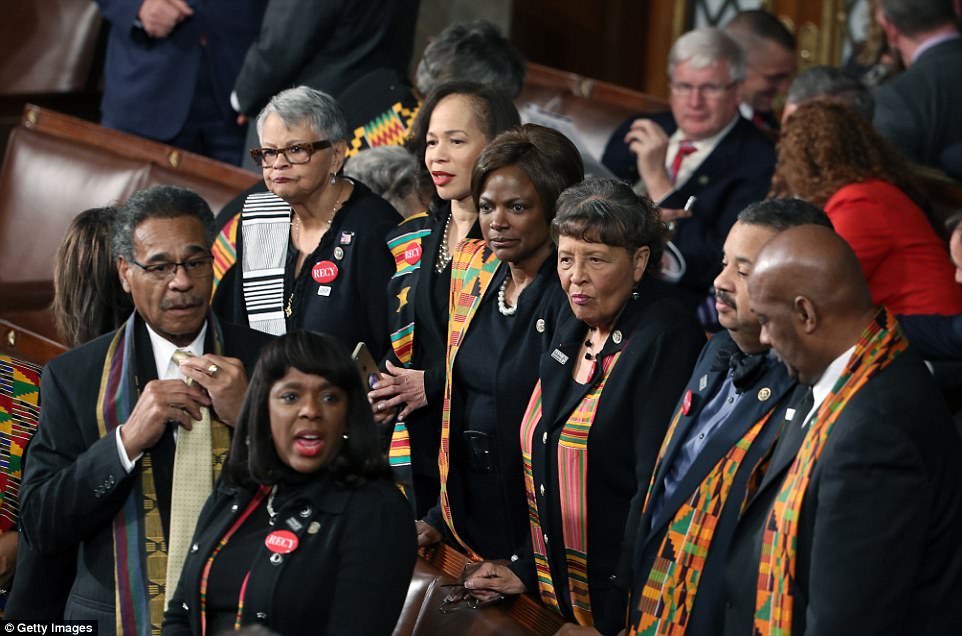 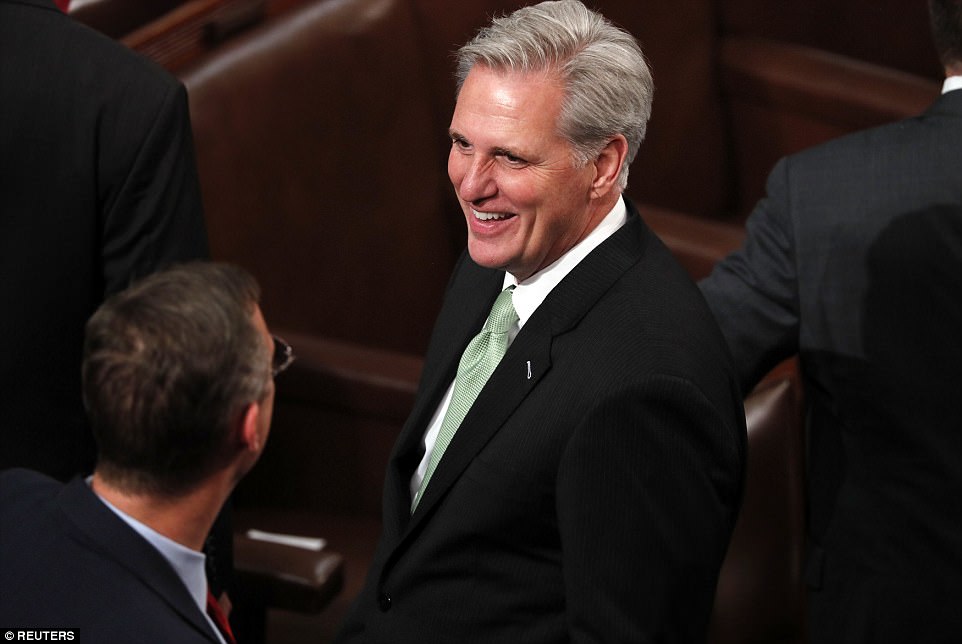 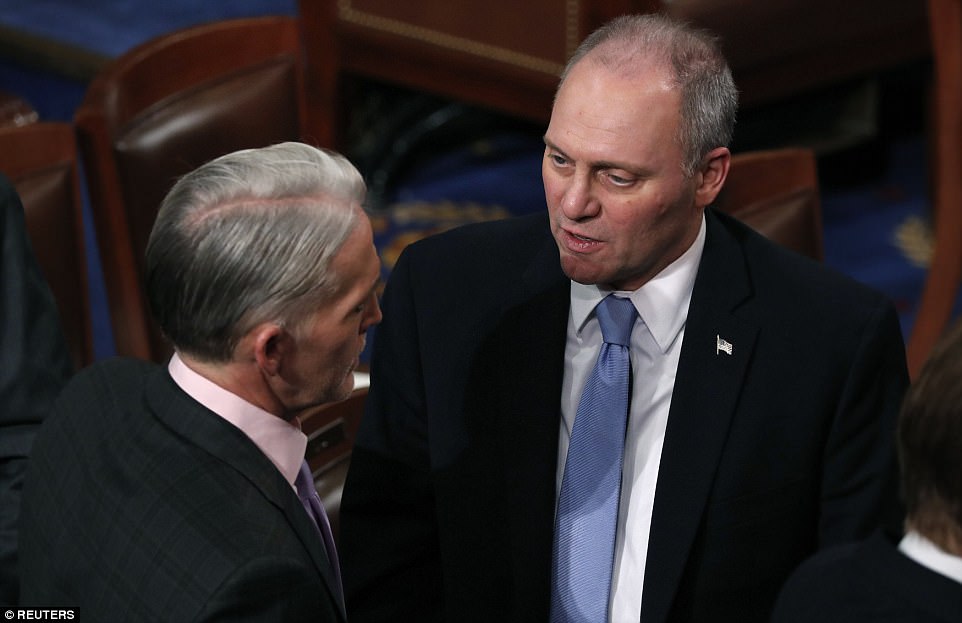 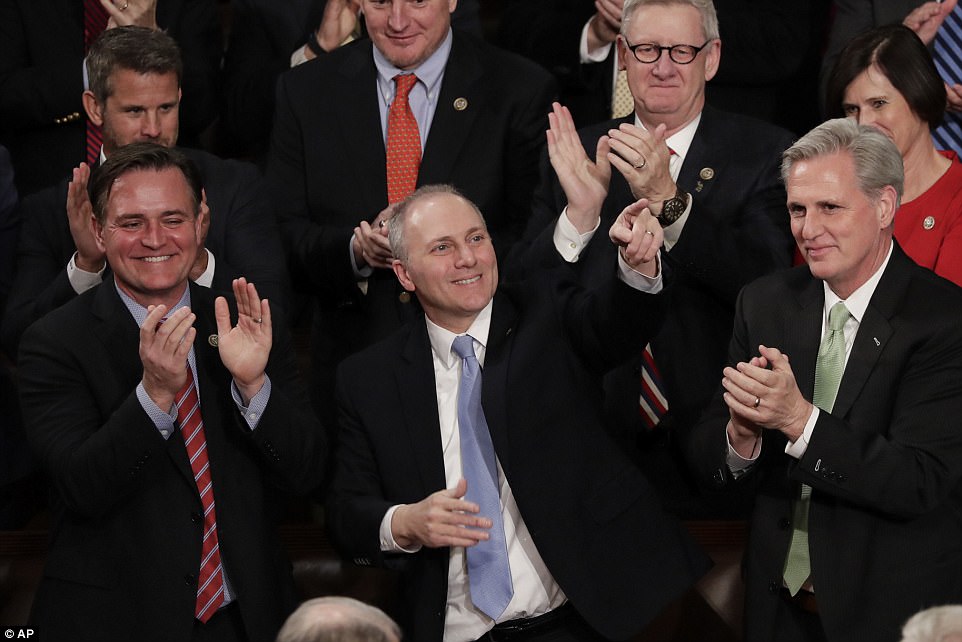 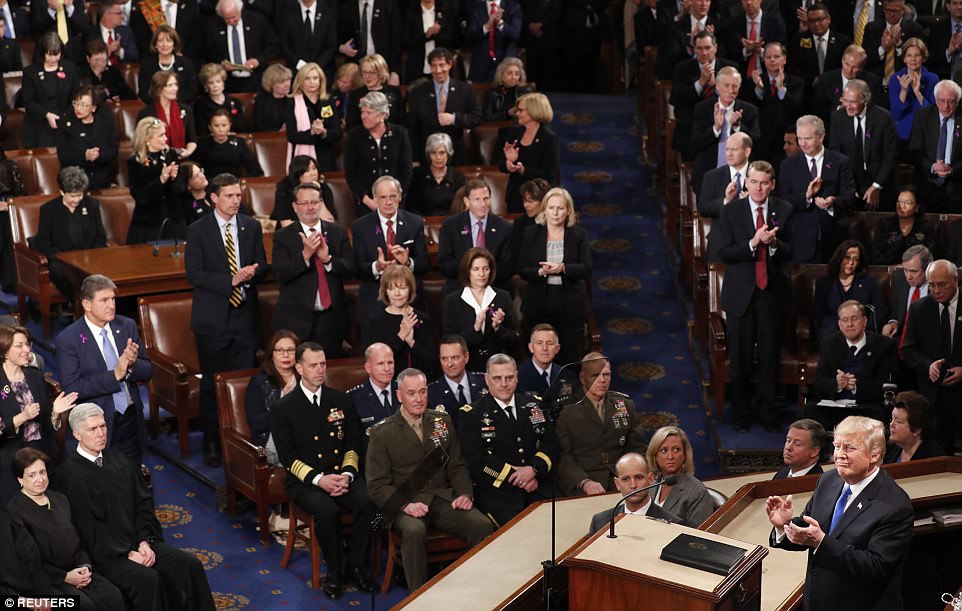 Trump delivers his State of the Union address to a joint session of the U.S. Congress on Capitol Hill

Multiple congressional committees and a special counsel are probing accusations, so far unsubstantiated, that his campaign aides conspired with Russian agents to swing the 2016 election in his direction.

But he won’t use the speech as an opportunity to lobby Democrats on his solution to the DACA problem, the looming expiration of an Obama-era program that protects from deportation hundreds of thousands of illegal immigrants brought to the U.S. as children.

Despite the president’s planned invitation for bipartisanship, Democrats resent the bargain he has offered them.

In addition to $25 billion to wall off Mexico from the U.S., he wants to end an international ‘diversity’ visa lottery and dramatically restrict extended-family chain migration policies – limiting green-card holders to sponsoring only immediate family members for their own legal status in the America.

Still, he will say that he is ‘extending an open hand to work with members of both parties, Democrats and Republicans, to protect our citizens, of every background, color, and creed.’

Trump will declare that he pursued his other successful policy pushes in order to ‘restore the bonds of trust between our citizens and their government.’

He will cite regulatory reform, renewed scrutiny of ‘unfair trade deals’ and ending ‘a war on American energy’ as ways his government has shown ‘love’ for taxpayers.

America’s first builder-president will also signal a request for funds – nearly $2 trillion according to some accounts – for infrastructure renewal. 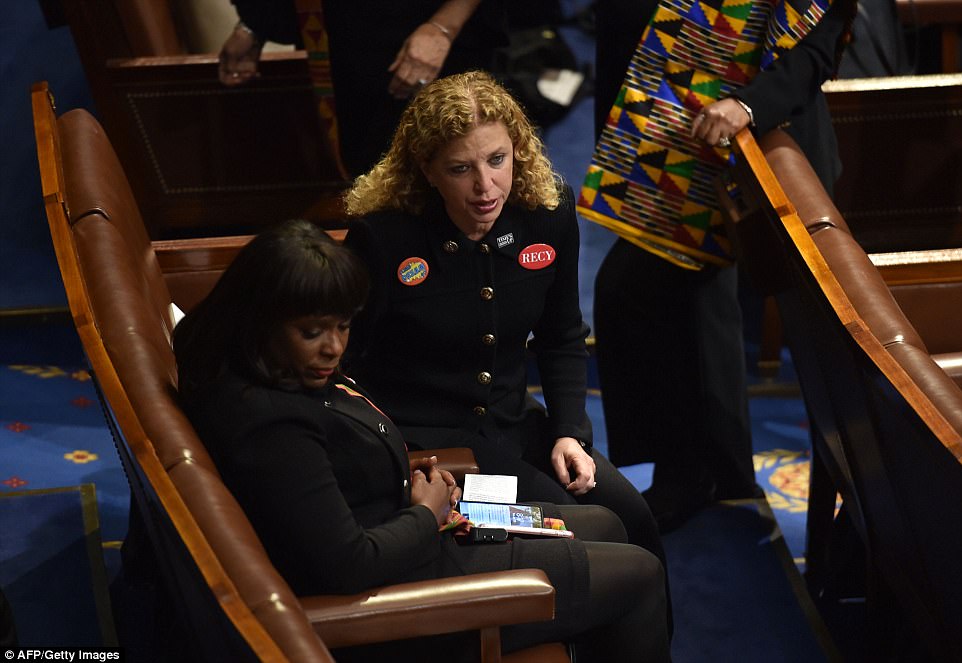 US Representative Debbie Wasserman Schultz (center), Democrat of Florida, awaits the State of the Union address at the US Capitol in DC 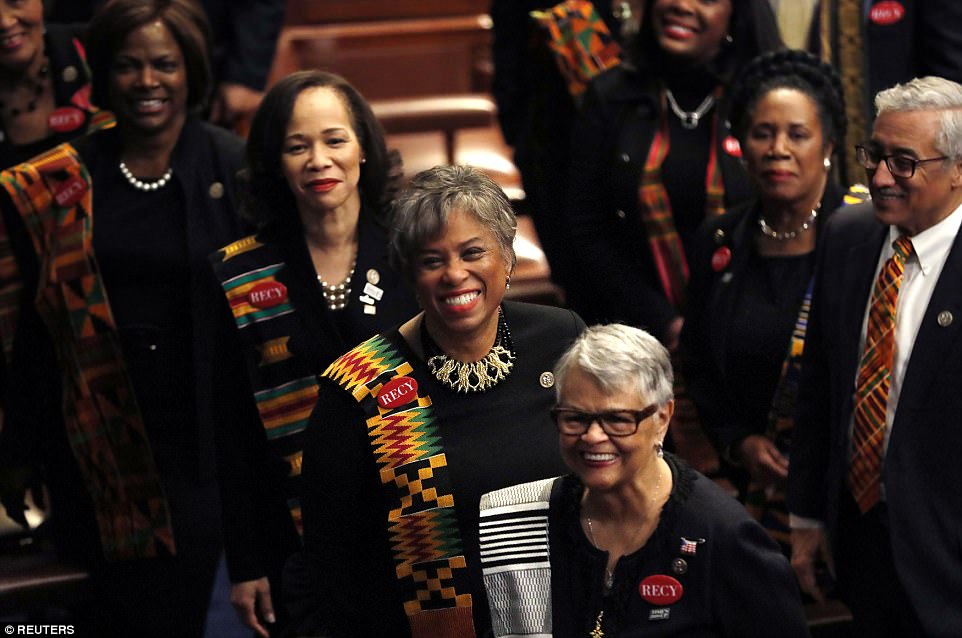 Democratic female members of Congress, wearing black to support the #MeToo movement and buttons referring to 1944 rape victim Recy Taylor, arrive on the House floor to watch Trump deliver his State of the Union address 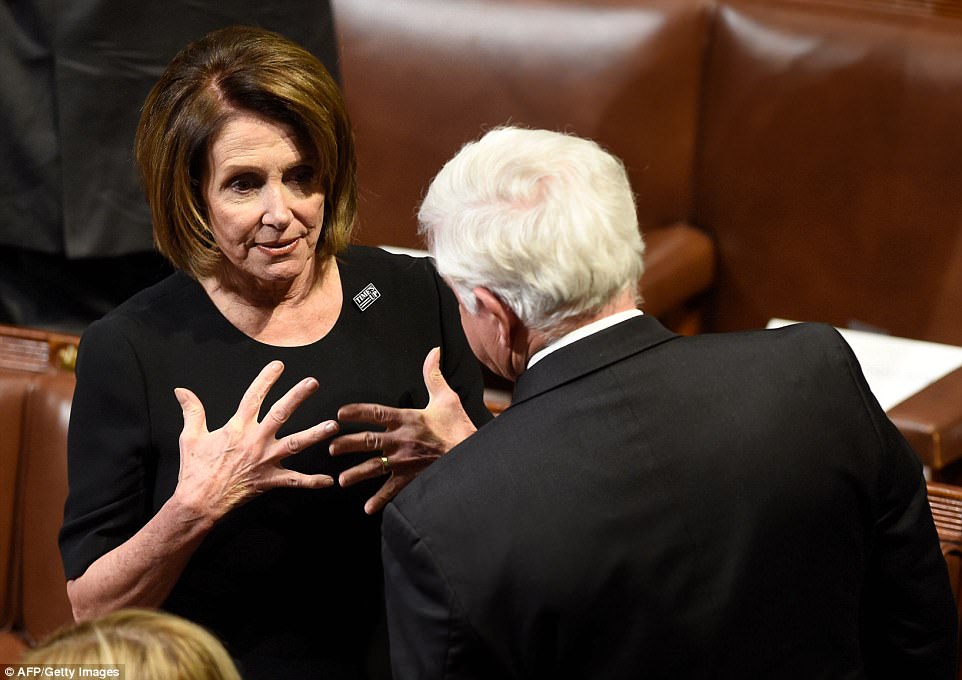 ‘We built the Empire State Building in just one year,’ he will say. ‘Isn’t it a disgrace that it can now take ten years just to get a permit approved for a simple road?’

The White House said Tuesday evening that the president would also take credit for largely defeating the ISIS terror army.

‘I’m proud to report that the coalition to defeat ISIS has liberated almost 100 percent of the territory once held by these killers in Iraq and Syria,’ he will say.

‘But there is much more work to be done. We will continue our fight until ISIS is defeated.’

Earlier in the day the president told news anchors during a White House luncheon that he aims to deliver a speech that will give both sides of the political aisle something to cheer. 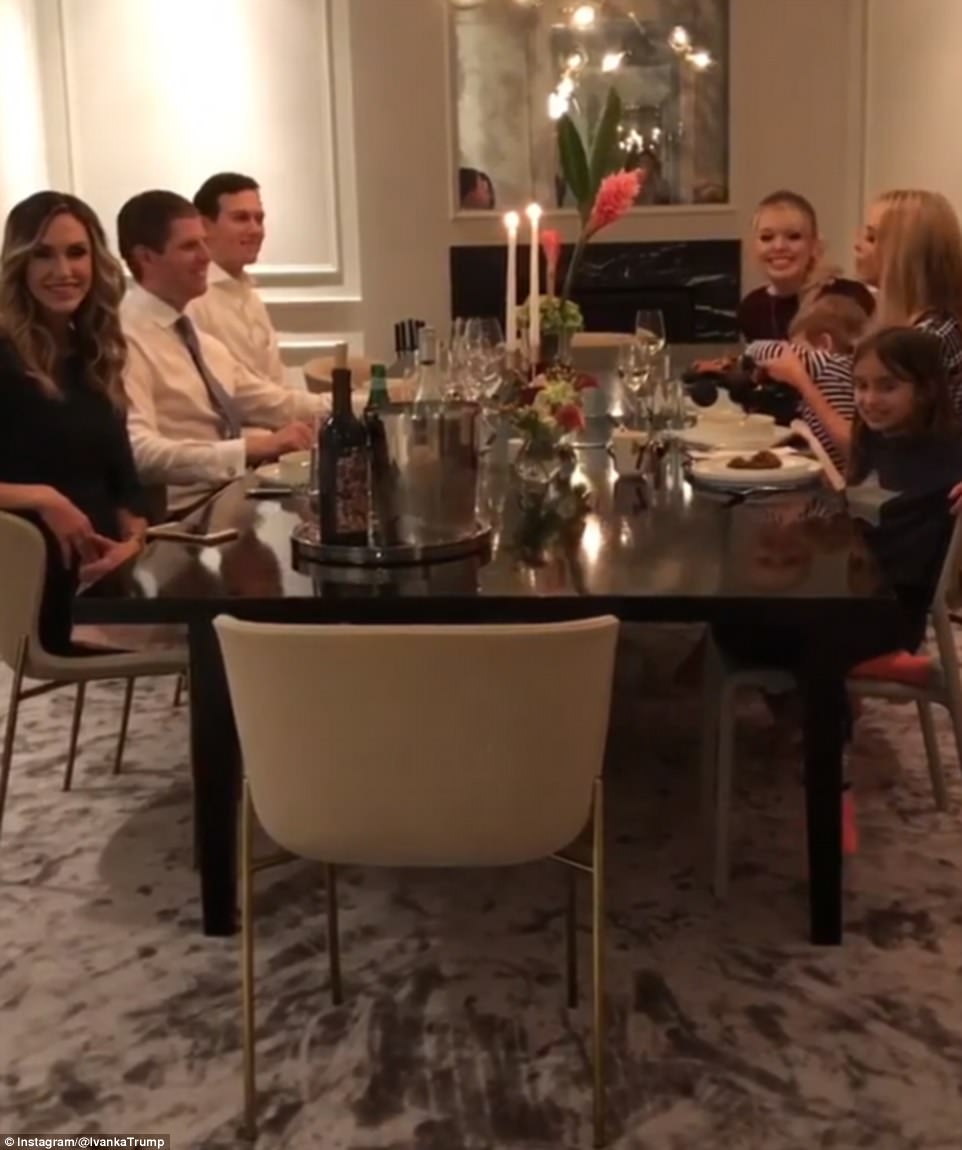 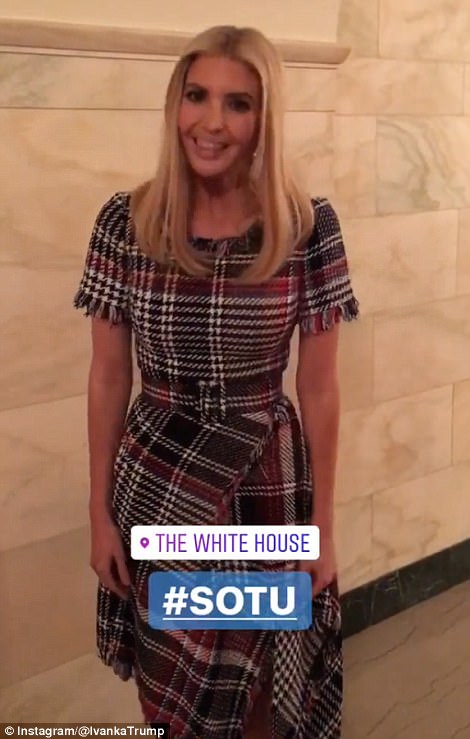 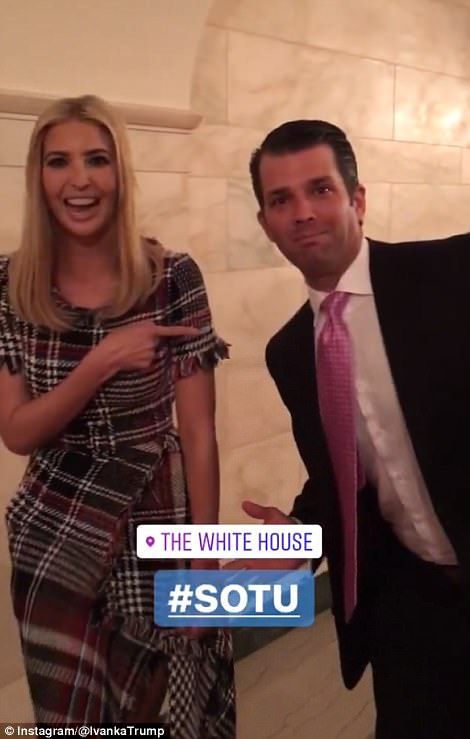 While the president acknowledged ‘tremendous divisiveness’ in the United States, he said it stretched back ‘for many years.’

‘I would consider it a great achievement if we could make our country united. If I could unite the country. That’s not an easy thing to do because the views are so divergent,’ he said.

Democratic Rep. Joseph Kennedy of Massachusetts will deliver the opposition-party response after Trump leaves the podium in the House chamber.

Excerpts provided by his office suggest that he will call Trump a ‘bully.’

‘Bullies may land a punch. They might leave a mark. But they have never, not once, in the history of our United States, managed to match the strength and spirit of a people united in defense of their future,’ he will say.

And Kennedy will have plenty to add about the political divisiveness that was the story of 2017.

‘It would be easy to dismiss the past year as chaos. Partisanship. Politics,’ he will say. ‘But it’s far bigger than that.’

‘This administration isn’t just targeting the laws that protect us: They are targeting the very idea that we are all worthy of protection.’ 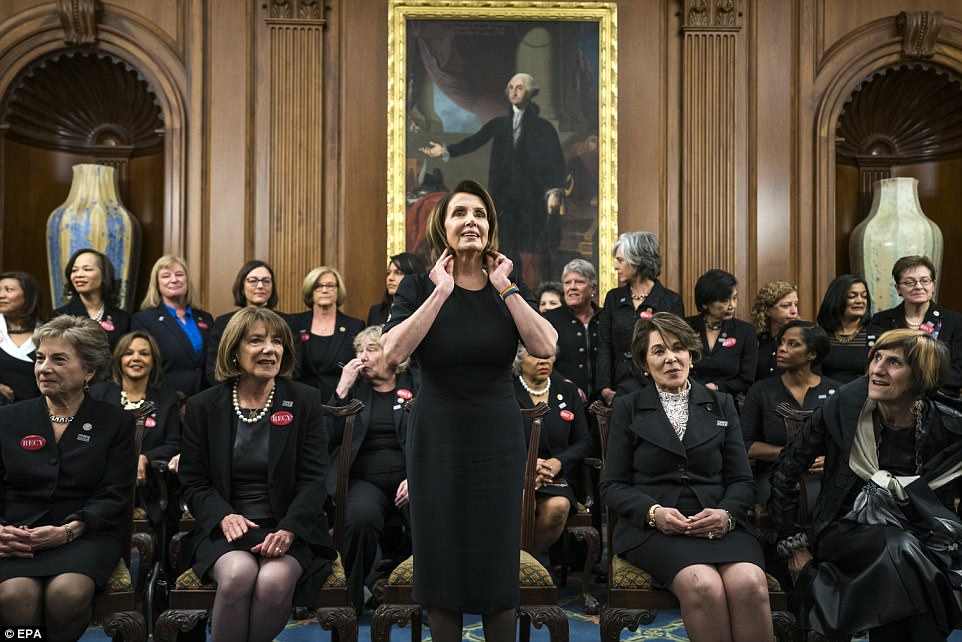 Democratic lawmakers, and some men too, show off their ensembles for tonight’s State of the Union speech as they show their support for the ‘Me Too’ movement. Trump was previously accused of sexual assault 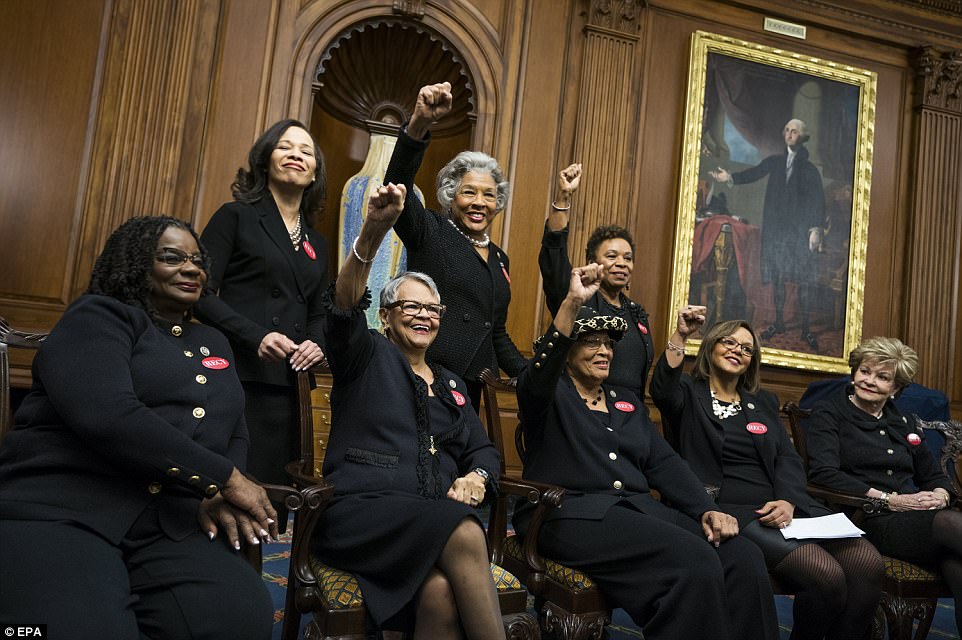 Democratic lawmakers, dressed in all black to show support for the ‘Me Too’ and ‘Time’s Up’ movements throw up a fist bump during a photo-op Tuesday before Trump’s State of the Union address