The former president, Ivanka Trump and Donald Trump Jr. had all been fighting subpoenas from James’ office seeking depositions amid accusations the Trump Organization engaged in fraudulent financial tactics.

Engoron had overruled Trump’s concerns that being deposed would violate his constitutional rights.

New York prosecutors believe the Trump Organization had knowingly misrepresented financial information in order to obtain favorable loans and other deals for over a decade.

‘Once again, the courts have ruled that Donald Trump must comply with our lawful investigation into his financial dealings,’ James said in a statement.

‘We will continue to follow the facts of this case and ensure that no one can evade the law.’

She tweeted on Thursday: ‘Our investigation will continue undeterred because no one is above the law.’ 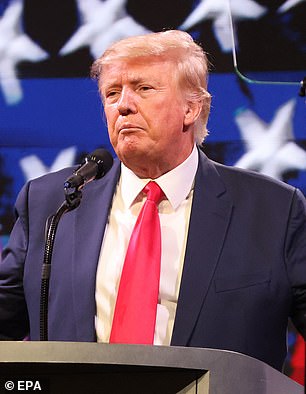 DailyMail.com has reached out to Trump attorney Alan Futerfas for comment.

They challenged the order in court, claiming that any information her team gains could be unfairly used in a separate but parallel criminal probe being run by the Manhattan District Attorney’s office.

But on Thursday, the court filing claimed ‘the existence of a criminal investigation does not preclude civil discovery of related facts, at which a party may exercise the privilege against self-incrimination.’

James would be able to bring a civil lawsuit against Trump using the deposition if evidence of wrongdoing was found. She could not file criminal charges due to the nature of her probe.

The criminal investigation, which had begun under former District Attorney Cyrus Vance, lost steam in recent months after it was taken over by new DA Alvin Bragg.

Bragg said in a statement last month that the investigation is still ongoing, but gave few if any details on its progress. A grand jury impaneled for the probe expired at the end of April without any public attempts to extend it.