Donald Trump hints at hitting the EU with trade tariffs

Donald Trump today tore into the European Union for trying to ‘take advantage of the United States’ over trade.

The US President accused the bloc of not being fair on trade and hinted that he could try to slap it with trade tariffs.

His angry tirade comes just weeks after he exempted the bloc from tariffs which he put on Chinese goods – but the exemption is due to expire in days.

His remarks will arm Theresa May, who today held talks with French President Emmanuel Macron and German Chancellor Angela Merkel about their ‘concern’ over possible American tariffs.

Addressing a rally in Michigan, the US president said the EU ‘sounds so nice’ but it was ‘formed to take advantage of the United States’. 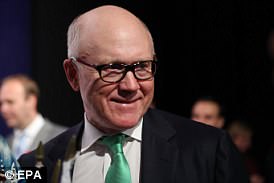 Robert ‘Woody’ Johnson argued ‘no one would be more enthusiastic’ about striking a post-Brexit trade agreement than the U.S. President (file pic)

Donald Trump wants to take the special relationship to ‘another level’ by signing a trade deal with Britain, the U.S. ambassador said last night.

Robert ‘Woody’ Johnson argued ‘no one would be more enthusiastic’ about striking a post-Brexit trade agreement than the U.S. President.

In an article for The Sun on Sunday, he wrote: ‘The UK has always been special to President Trump. When he appointed me his Ambassador, he was clear: Our goal is to bring America and Britain closer than ever before… The President is right to want to take our special relationship to another level.’

Mr Johnson called on firms based in the UK to boost transatlantic trade so they can take advantage of the growing American economy, which he said was ‘booming in a way I’ve never seen before’.

He added: ‘Now is the time for British companies to break into America’s huge market and grow their businesses like never before. The future is full of opportunity for trade.

‘When the UK cuts loose from the EU, you will have the option to sign trade deals with countries around the world.

‘Of course, this will be dependent on the final agreement the UK strikes with the EU.

‘But if there is room to negotiate a trade deal, no one would be more enthusiastic than the President.

President Trump has supported Brexit from the outset. He has made it clear he would love to sign a deal. And he would never let America’s best ally wait at the back of the line.’

Pledging to support US farmers, Mr Trump accused Brussels of putting up barriers and called for markets to be opened up.

Responding to a member of the crowd shouting ‘not anymore’, he replied: ‘You’re right. Not anymore. We told them that yesterday actually, we said the same words ‘not anymore’. Those days are over.

‘But we’ve got to open up these markets. It’s not fair.’

The US and China have been locked in a bitter dispute over tariffs on metals and other products, raising fears of a trade war between the world’s two largest economies.

Mr Macron and Mserkel have both urged Mr Trump to extend the EU’s exemption from punishing tariffs on aluminium and steel during recent visits to Washington.

Bemoaning the US’s deficit in international trade, Mr Trump told the rally: ‘Long-term you’re going to be so happy… we’re going to get it opened up or we’re not doing business with these countries.

‘With the European Union last year… that sounds so nice, doesn’t it? I don’t know why, they literally… formed to take advantage of the United States.

‘I don’t blame prime minister (Shinzo) Abe of Japan, I don’t blame the heads of these countries for taking advantage of us.

‘I blame past presidents and past leaders of our country.’

His words will fuel fears of a global grade war which free marketeers warn will push up prices for consumers in the long run.

Europe is alarmed at the prospect that Mr Trump will lead the world into a protectionist arms race – and are leaning on him to abandon his threats.

Mrs May’s spokesman today delivered a read out of her call with Mr Macron and Mrs Merkel.

He said: ‘They also noted the vital importance of our steel and aluminium industries and their concern about the impact of US tariffs.

‘The leaders pledged to continue to work closely with the rest of the EU and the US Administration with the aim of a permanent exemption from US tariffs.

‘Finally, they all agreed on the value of continued engagement in the E3 format (Britain, France and Germany) to advance our shared interests and our security.’ 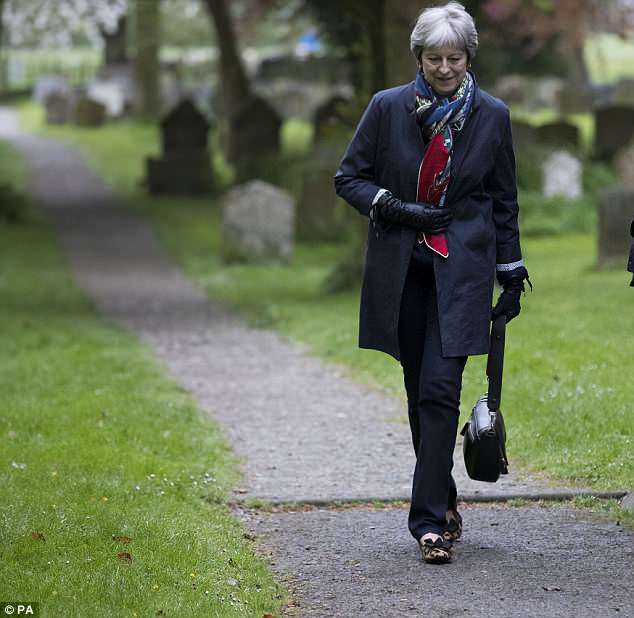 His remarks will arm Theresa May, (pictured going to church today in Maidenhead) who today held talks with French President Emmanuel Macron and German Chancellor Angela Merkel about their ‘concern’ over possible American tariffs