Donald Trump has renewed his criticism of the new US embassy in Nine Elms, London, saying it is in a ‘lousy’ and ‘horrible’ location and cost too much.

The US president, who is visiting the UK on July 13, lashed out again at the move from Grosvenor Square in the centre of the capital to a new location south of the Thames.

Speaking at a rally in Michigan, he said: ‘In the UK, in London, we had the best site in all of London. The best site.

President Donald Trump walks towards the podium to speak at a rally at Total Sports Park in Washington, Michigan, yesterday

‘Well, some genius said, we’re gonna sell the site and then we’re going to take the money and build a new embassy…

‘They go out and they buy a horrible location. And they build a new embassy. That’s the good news. The bad news is it cost over a billion dollars.’

Mr Trump blamed his predecessors for the project, calling it a ‘Bush-Obama special’, adding later: ‘Hopefully we’ll have many years of success with that embassy.’

Mr Trump also attacked the European Union, China other nations over trade, threatening to ‘take on’ the bloc and superpower.

Addressing a rally in Michigan, the US president said the EU ‘sounds so nice’ but it was ‘formed to take advantage of the US’. The US president is angry at the embassy being moved to Nine Elms, south of the River Thames

Mr Trump said he does ‘not blame them (the EU). I blame past presidents’.

He told supporters: ‘Long-term you’re going to be so happy… or we are not doing business with these guys.’ 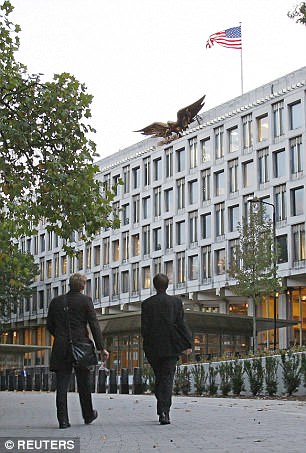 Mr Trump attacked familiar enemies and added fresh targets for his scorn during the campaign-style speech in Michigan.

The president says he ‘knows things’ about Mr Tester that could lead to the Montana senator losing his bid for re-election, but Mr Trump didn’t elaborate.

Mr Trump also pointed to Democratic Senator Debbie Stabenow as an impediment, telling his audience that Michigan voters are at fault because they keep re-electing her.

Mr Trump appeared in Washington Township, Michigan, on the same night as the annual White House Correspondents’ Dinner, telling his audience he would rather be with them than in Washington DC.

Michigan is one of the states in the Upper Midwest that Hillary Clinton counted on in 2016 but saw slip away.

In fact, Mr Trump was the first Republican presidential nominee to capture Michigan since George HW Bush in 1988.