President Donald Trump teed off on Fox News for the second day in a row Friday, this time going after the network’s polling unit after a survey showed him losing the race to Joe Biden by 8 percentage points.

Trump ripped the network and looked back fondly at its early days, saying the late executive Roger Ailes is ‘looking down’ watching.

Biden has led Trump in the last eight publicly released head-to-head matchups against Trump as unemployment spiked and U.S. coronavirus deaths surpassed 90,000, although by an average of 5.5 points in the RealClearPolitics average.

‘Why doesn’t @FoxNews put up the CNBC POLL or the (believe it or not!) @CNN Poll? Hope Roger A is looking down and watching what has happened to this once beautiful creation!’ Trump tweeted Friday.

In a second tweet, he demanded: ‘@FoxNews should fire their Fake Pollster. Never had a good Fox Poll!’ It included a screen shot of a Fox broadcast alert that Hillary Clinton led Trump by 10 percentage points. Clinton was the clear poll leader in 2016, and though she got 3 million more votes than Trump, he beat her in the Electoral College by 306 to 232 electoral votes.

Although Trump faces much more on-air criticism on CNN than he does on Fox, both networks maintain independent polling units who conduct surveys.

Those questioned ended up showing support for Biden at 48 percent, with 40 percent for Trump and a further 11 percent still said to be undecided.

The results from a survey of 1,207 people are an improvement for Biden who was tied with Trump at 42 percent in last months poll.

Ailes, a longtime Trump friend, steered the network for years before stepping down in 2016 amid a sexual assault allegations. He died in 2017 after Trump took the White House. 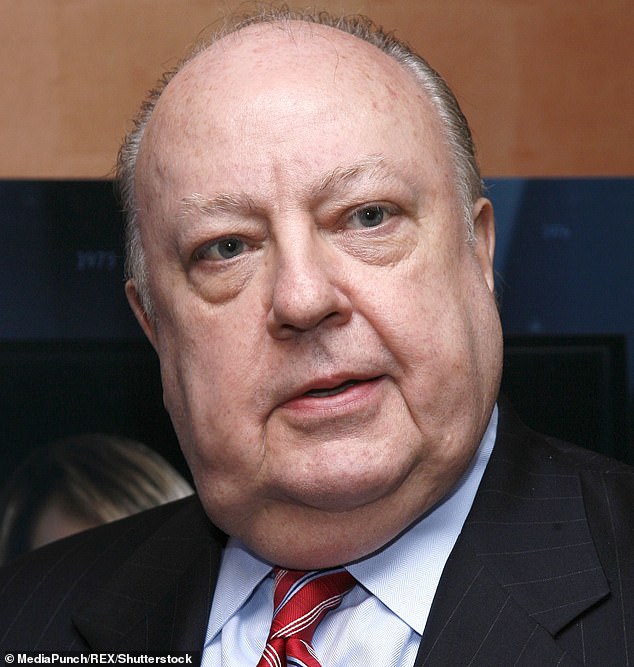 Trump ripped the network and looked back fondly at its early days, saying the late Fox executive Roger Ailes is ‘looking down’ watching

In voters aged 65 and older Biden leads by 17 points and manages a 13 point lead among independents.

The exit polls are a significant swing towards the Democrats over the last three-and-a-half-years.

In 2016, older people voted for Trump by 7 points and won independents by 4 points. 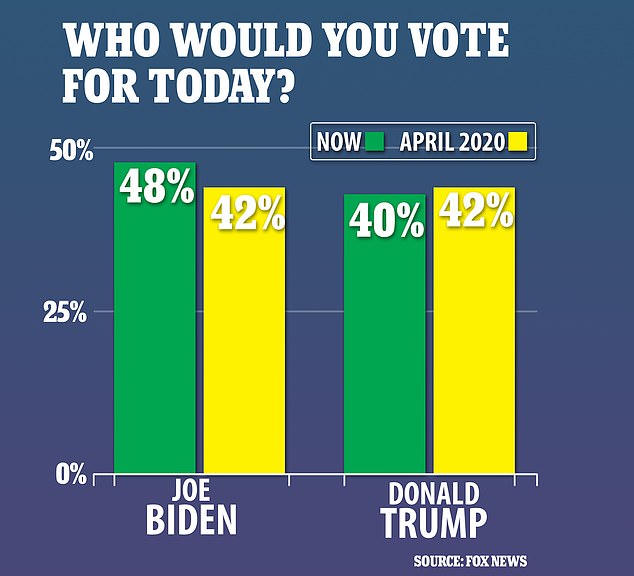 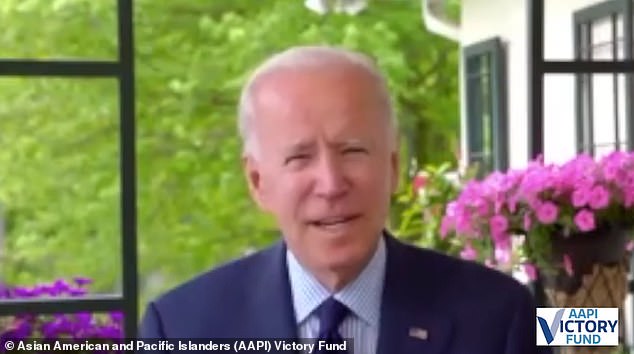 When it comes to motivation, Biden is showing a lead of 53 percent to Trump’s 41 percent among voters who say they are definitely going to turn out and vote which may help allay Democrat fears that Biden fails to inspire enthusiasm.

In terms of loyal supporting blocs, 69 percent of Biden’s supporters say they are extremely motivated to vote in November’s election. It compares with 61 percent of Trump supporters. 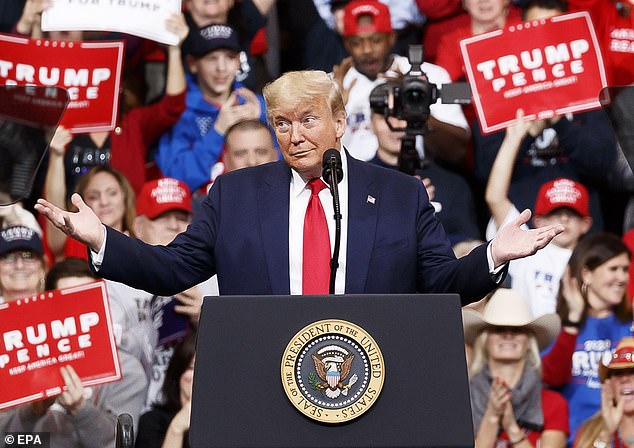 The poll suggests Trump is trusted more on the economy and has a slim 3-point margin. He also leads by 7 points among men and by 30 among rural whites

The poll by Fox News also shows a large split in support when it comes to the sexes and race.

Biden has a 20 point lead among women while President Trump leads by 7 points among men.

The poll reveals that Trump’s favorability rating is in negative territory with 43 percent voters have a positive opinion of him and 55 percent negative.

Biden’s favorability is far more encouraging with 48 per cent thinking favorably of the candidate and 46 percent unfavorably. 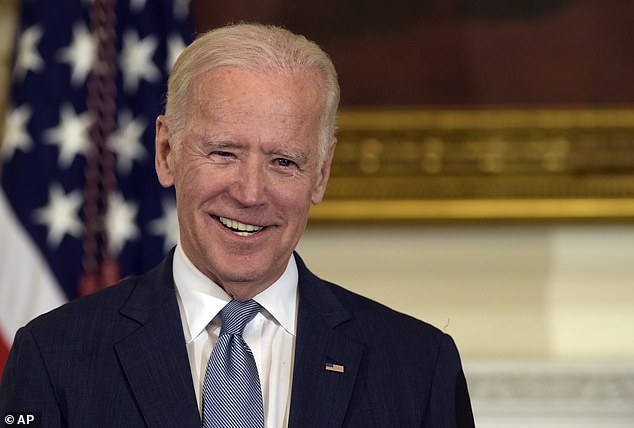 On the issues, Trump’s focus on the economy appears to be paying off with 45 percent of voters trusting him compared to just 42 percent with Biden.

As to who is best suited to take control during the current pandemic, Biden is seen as a more trusted pair of hands and leads Trump by 9 points. On the issue of health care he leads by 17 points.

The results also suggest voters prefer Biden over Trump when it comes to dealing with China with the former vice-president leading the incumbent by a 6-point margin. 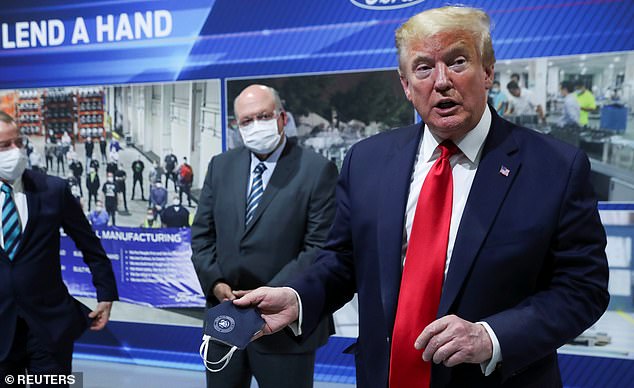 Voters appear to trust Biden to do a better job than Trump on health care by 17 points, according to the poll

Trump tore into Fox News on Thursday, accusing the network that has featured a bevy of commentators praising his leadership and backing some of his statements on hydroxychloroquine of ‘doing nothing’ to help Republicans.

Trump made the claim in a pair of defiant tweets he made as he was traveling in Michigan, where he toured a Ford plant in Ypsilanti in a critical battleground state that he carried in 2016 where he has sparred with the state’s governor over the coronavirus.

Fox has provided intense coverage of anti-lockdown protests in Michigan that Trump stoked with his call to ‘liberate’ states last month.

‘Many will disagree, but @FoxNews is doing nothing to help Republicans, and me, get re-elected on November 3rd,’ Trump wrote.

‘Sure, there are some truly GREAT people on Fox, but you also have some real “garbage” littered all over the network, people like Dummy Juan Williams, Schumerite Chris Hahn, Richard Goodstein, Donna Brazile, Niel Cavuto, and many others,’ Trump wrote – choosing a handful of commentators with Democratic backgrounds as well as Cavuto, who issued an on-air rebuttal after Trump revealed he was taking hydroxy.

‘They repeat the worst of the Democrat speaking points, and lies. All of the good is totally nullified, and more. Net Result = BAD! CNN & MSDNC are all in for the Do Nothing Democrats! Fox WAS Great!’ Trump wrote.

The network has recently featured extended Trump call-in interviews on ‘Fox and Friends’ and a special sit-down with the solemn backdrop the Lincoln Memorial. But some commentators have distanced themselves from Trump, as when Fox host Neil Cavuto told viewers: ‘This will kill you’ after Trump revealed he was taking the drug hydroxychloroquine, which is only being tested for effectiveness against the virus.

The other hosts Trump singled out included Donna Brazile, a former Democratic National Committee chair who signed a deal as a Fox commentator, longtime voice from the left Juan Williams, Chris Hahn, who indeed worked for Sen. Charles Schumer years ago, and Richard Goodstein, a former Bill and Hillary Clinton advisor.