A defiant Donald Trump told reporters on Wednesday that he never asked his top European ambassador to lean on Ukraine’s president for a politically motivated investigation of his Democratic rival Joe Biden—insisting he told the diplomat that ‘I want nothing’ from the former Soviet state.

Watching Ambassador Gordon Sondland’s impeachment hearing testimony in the White House residence, the president wrote down a rough transcription of one portion and read it aloud to the press corps as he left for a manufacturing plant tour in Texas.

‘And now here’s my response that he just gave. Ready? You have the cameras rolling? “I want nothing. That is what I want from Ukraine!”‘

‘That is what I said: “I want nothing.” I said it twice,’ Trump insisted.

President Donald Trump held Sharpie-writen notes as he spoke to reporters after watching testimony by U.S. Ambassador to the European Union Gordon Sondland 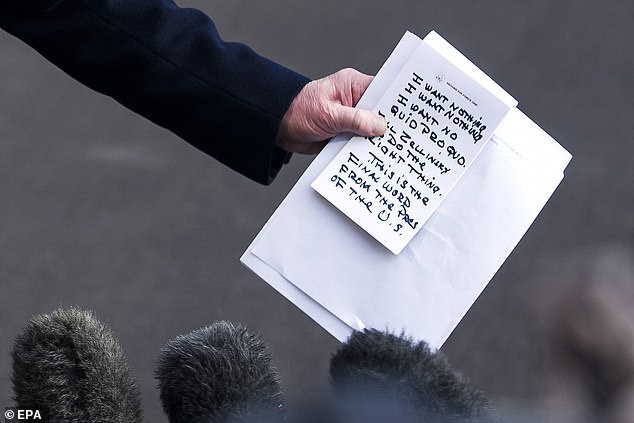 Trump wrote down on a pad of paper the words Sondland used to describe a phone call with him, in which he told Sondland that he wanted ‘nothing’ from Ukraine 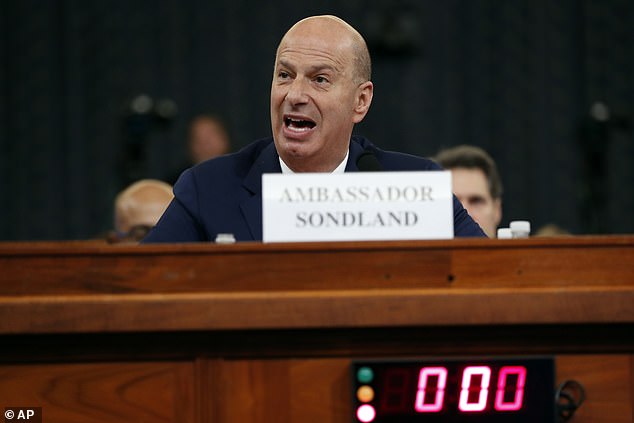 U.S. Ambassador to the European Union Gordon Sondland explained to Congress that a ‘quid pro quo’ was in place, conditioning a White House meeting on Ukraine’s new president announcing corruption probes tat would include an investigation of Joe Biden

He read his reconstruction of the scene from his own black-Sharpie notes on a White House pad of paper. An official told DailyMail.com that he had been watching ‘most of the hearing’ starting at 9 o’clock.

He told reporters the same story three times, describing in an ever-more-manic tone what he claims were his marching orders to Sondald.

The president didn’t address the rest of Sondland’s testimony, speaking for barely 3 minutes.

Although a selective reading of Sondland’s testimony, Trump’s animated case recounted his words accurately—particularly about Democrats’ contention that a quid-pro-quo arrangement had conditioned military aid on a Biden corruption probe.

The ambassador testified that the president told him: ‘I want no quid pro quo.’ 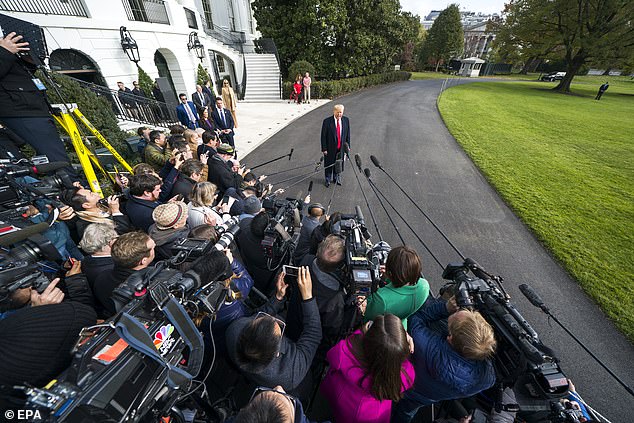 But minutes earlier he had conceded that there was a ‘quid pro quo’ in place, linking unspecified corruption investigations and a White House visit that Ukrainian President Volodymyr Zelensky desperately wanted.

Sondland said he did not know until September that what was actually desired was an investigation into the Bidens.

‘I know that members of this committee have frequently framed these complicated issues in the form of a simple question: Was there a “quid pro quo?” As I testified previously, with regard to the requested White House call and White House meeting, the answer is yes,’ Sondland said.

The quid pro quo in this case, he said, involved arranging a White House visit for Zelensky in return for an announcement of investigations of Burisma, a Ukrainian gas company, and an unproven theory that Ukraine had interfered in the 2016 U.S. presidential election.

Biden´s son Hunter was a Burisma board member, and benefited when his father forced Ukraine to fire a prosecutor investigating the firm. 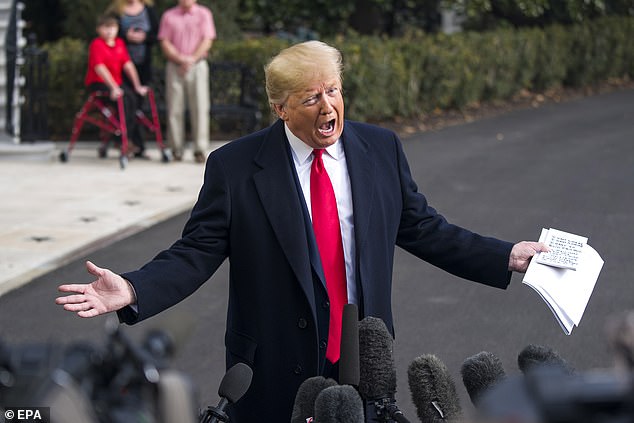 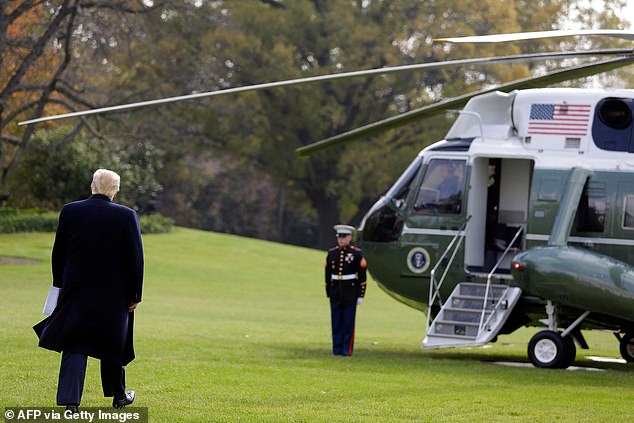 White House Press Secretary Stephanie Grisham said in a statement that Sondland’s testimony ‘made clear that in one of the few brief phone calls he had with President Trump, the President clearly stated that he “wanted nothing” from Ukraine and repeated “no quid pro quo over and over again”.’

‘In fact, no quid pro quo ever occurred,’ Grisham said.

‘The U.S. aid to Ukraine flowed, no investigation was launched, and President Trump has met and spoken with President Zelensky. Democrats keep chasing ghosts.’

Trump told reporters that Sondland’s revelation about the president’s ‘I want nothing’ posture should be an impeachment-killer.

‘I would say that means it’s all over,’ he said.