The president was greeted by chants of four-more-years as his signature pump up song ‘God Bless the USA’ faded out.

‘You know considering that we caught President Obama and Sleepy Joe Biden spying on our campaign – treason – we’ll probably be entitled to another four more years after that,’ Trump said after thanking the crowd for their chants.

He also suggested during another mini-rally in Wisconsin on Monday that he should be given a chance to serve three terms as president, claiming he felt cheated out of his first four years.

Trump’s visits and alternative campaigning in Wisconsin, Minnesota and Arizona Monday and Tuesday are an attempt to distract and run counter-programming to the first two days of the first-ever fully virtual Democratic National Convention.

The president jested with the crowd that it was 122 degrees at the rally location – but he wasn’t far off as the temperatures in Yuma topped 110 degrees on Tuesday.

President Donald Trump said Tuesday during a mini rally in Yuma, Arizona that he should be able to serve two more terms, claiming his first was obstructed by ‘treason’ from former President Barack Obama and presumptive Democratic nominee Joe Biden 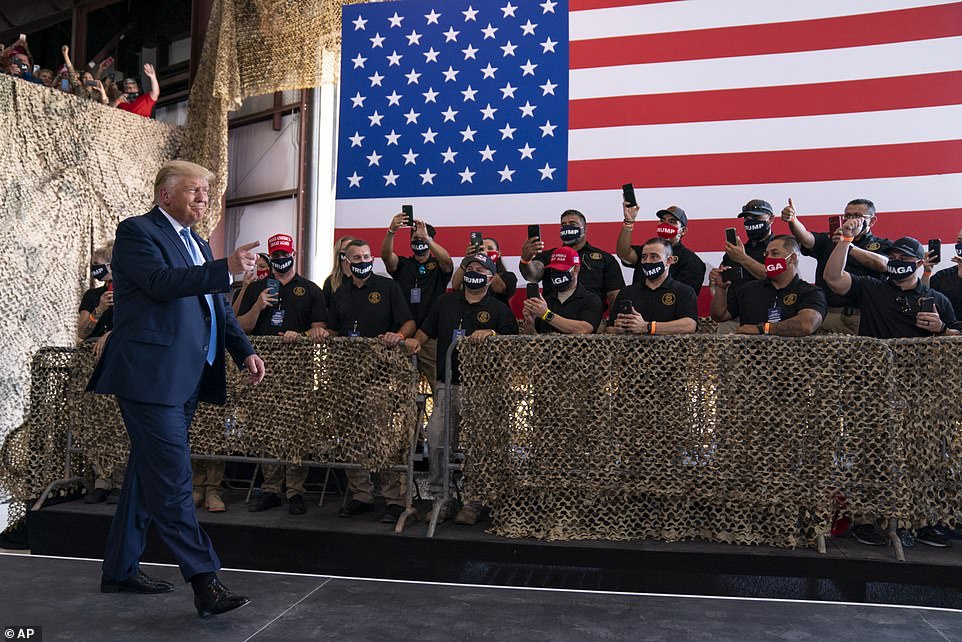 ‘You know considering that we caught President Obama and Sleepy Joe Biden spying on our campaign – treason – we’ll probably be entitled to another four more years after that,’ Trump said as the first line of his speech following ‘four more years’ chants 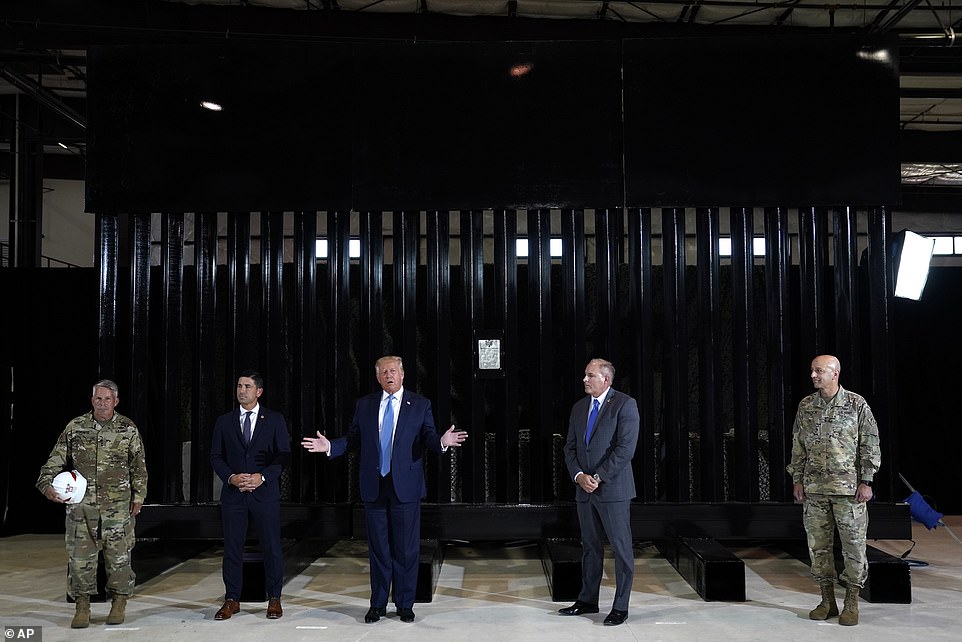 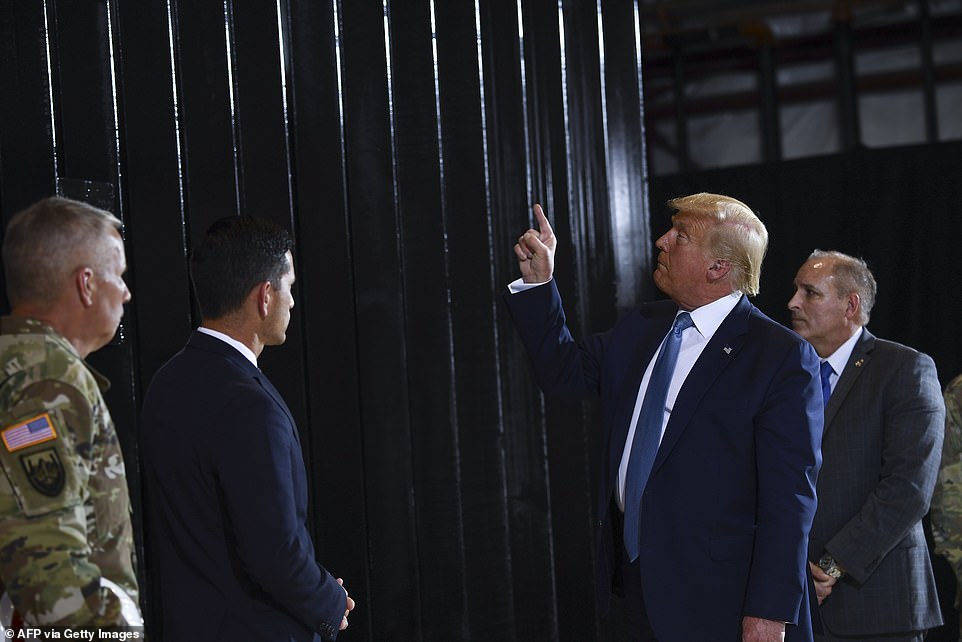 He also saw an inspected, indoors, some models of the wall and delivered remarks on immigration and border security to members of the border patrol at the international airport in Yuma 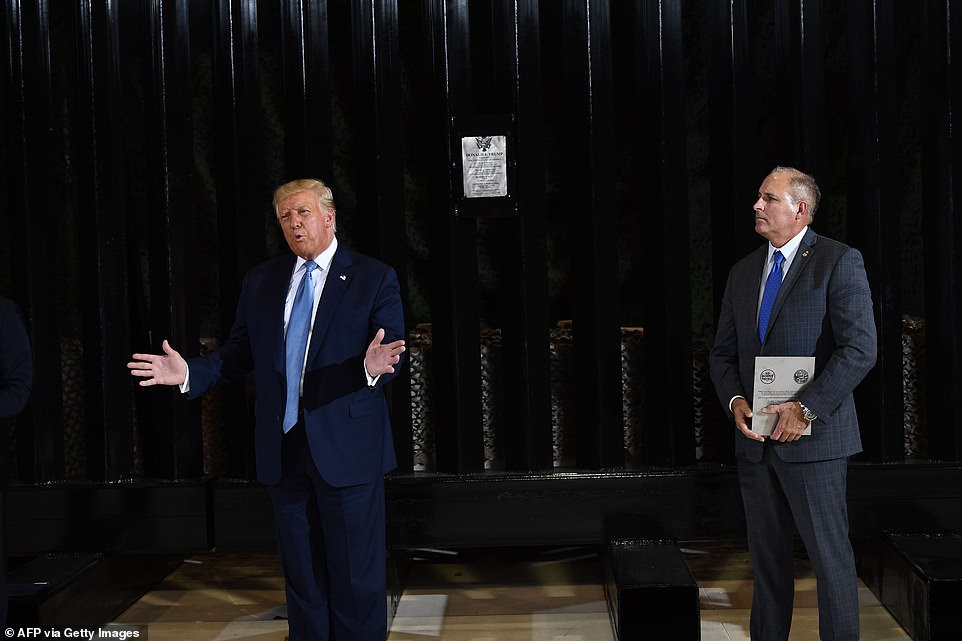 Reports claim that Trump has micromanaged the design of the border wall, calling for there the be ‘slats,’ so the wall is see through, and demanding they be painted a matte black for a more visually appealing and effective construction

He jokingly asked Republican Arizona Governor Doug Ducey, who was present at the rally, if he could turn the temperature down at the event held outside in the shade of an airplane hangar.

‘This is like a test? You think Joe Biden could do this? I don’t know,’ Trump swiped at his Democratic opponent, who he calls ‘Sleep Joe’ and claims could not keep up with him physically or mentally.

The president spent his morning in Cedar Rapids, Iowa receiving an update on hurricane relief and then his afternoon in Arizona where he received an update on construction of the border wall between Arizona and Mexico.

He also inspected example constructions indoors before venturing to his mini-rally.

Some are framing the remarks, which are disguised by presidential business, as ‘peaceful protests’ in an attempt to get around rules against large public gatherings in the midst of the coronavirus pandemic.

Trump’s last ‘official,’ planned and promoted rally was in late June in Oklahoma.

The first and only post-coronavirus rally, however, was largely unsuccessful – with thousands of empty seats at a 19,000-person capacity stadium, the size of which the president was easily able to fill in the 2016 campaign and at other pre-coronavirus rallies.

Although the mini rally Tuesday – and the others in Wisconsin and Minnesota on Monday – were reminiscent of the old days with booming music, allies in tow and loyalist followers in the stands, the crowds are much smaller than in the past. 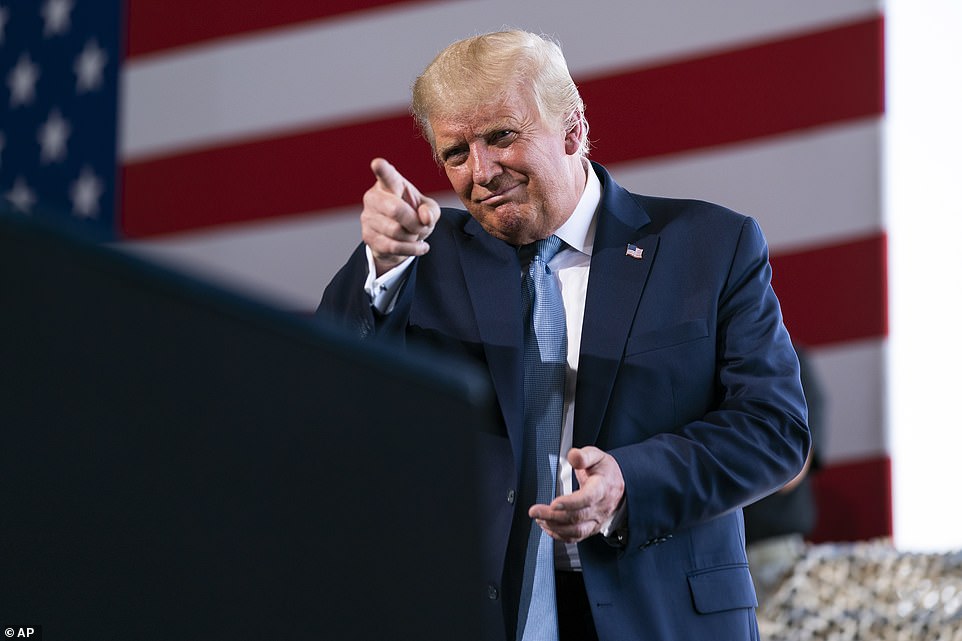 Trump has held mini rallies in three different states, Minnesota, Wisconsin and Arizona, in the past two days to run counter-programming as Democrats kicked off their first-ever fully virtual convention, which runs through Thursday

His aim with a second trip to Arizona in two months is to highlight his immigration agenda as he received an update on the construction of his promised southern border wall, which was a key pledge of his 2016 campaign.

‘So I’m thrilled to be in Yuma, Arizona to proudly accept the endorsement of the National Border PAtrol Council – that’s a big deal,’ Trump, who prides himself on his hardline illegal immigration stances touted.

‘And they are – they’re great friends of mine and we’re building the wall,’ he continued. ‘We’ll be up to – next week, we’ll be up to 300 miles of incredible wall. Incredible.’

The president was in his element as he delivered remarks to an enthusiastic crowd of loyalist supporters.

‘We are very tough at the border,’ he said, bragging that if someone comes back in 1,000 years – even with all the technological advances, there will still be ‘wheels and walls.’

The uptick in Trump’s trips this week comes as the president tries to deflect Democrats from a convention polling boost.