President Donald Trump retweeted posts calling Kamala Harris ‘camel laugh’ on Friday, the day after he refused to say she was eligible to serve as vice president.

In a flurry of retweets consisting of criticism for the Democratic presidential ticket and praise for his deal between Israel and the United Arab Emirates, President Trump included a tweet with derogatory and racist descriptions of Harris and Joe Biden.

‘While Biden plays hide and seek with Camel Laugh, Trump plays 3 dimensional Chess with the Middle East and wins historical deals!! ‘Play it again Sam’ how the Democrats will lose everything in November! TRUMP IS THE GREATEST!!!,’ read one of the two retweets.

‘Let’s get this straight right away Camel Laugh and China Joe will lie, lie, and lie and the media will NOT challenge them on all the false statements they make. IT IS UP TO AMERICAN WARRIORS TO GET THE TRUTH OUT TO THE AMERICAN PEOPLE!!!!,’ read the other.

Trump has often accused Biden of ‘hiding in his basement’ and complained the Democratic ticket has yet to answer as many questions from the press as he does.

His insults to Harris came after he fanned the flames of yet another ‘birther’ conspiracy theory by telling White House reporters Thursday that he had ‘no idea’ if Harris was eligible to be vice president.

‘I, personally, have no reason to believe she’s not but again my focus for the last 24 hours has been on the historic peace deal,’ he told CBS’ ‘This Morning.’

Democrats, meanwhile, accused Trump of racism and pointed out the last candidate to face questions about their birth was Barack Obama – the first black president.

‘This is only the second time that that has happened in our nation’s history. And the first time was with President Barack Obama. So why is it that only the two Black candidates are questioned about the legitimacy of their citizenship?,’ Valerie Jarrett, a former top Obama advisor, told the Los Angeles Times.

But President Trump claimed that the Republican lawyer who wrote a Newsweek op-ed pushing that claim ‘is a very highly qualified, very talented lawyer.’

Right-wing law professor John C. Eastman wrote an editorial Wednesday that argued that because Harris’ parents weren’t citizens when she was born in 1964 in Oakland, California then she might not fit the definition of eligibility under the U.S. Constitution.

A number of Constitutional experts said that was flat-out false and Harris’ defenders called it racist. 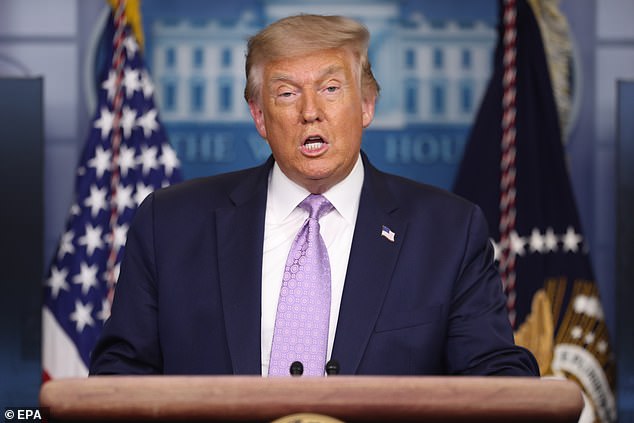 President Donald Trump said he has ‘no idea’ if Kamala Harris is eligible to be vice president, adding that an op-ed that suggested she wasn’t was written by a ‘very highly qualified, very talented lawyer’ 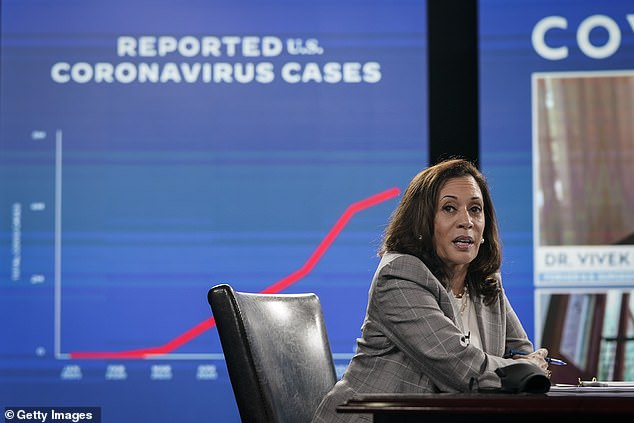 A Newsweek op-ed argued that Kamala Harris (pictured) may not be eligible to be vice president because her parents weren’t U.S. citizens when she was born in California in 1964. One prominent law professor called the editorial ‘racist nonsense’ 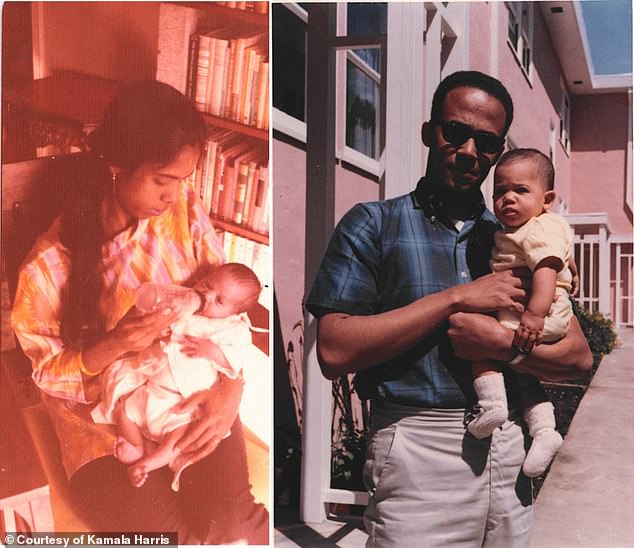 Eastman had run for California attorney general in 2010, the same year as Harris, but was beaten in the GOP primary, while she won the race. 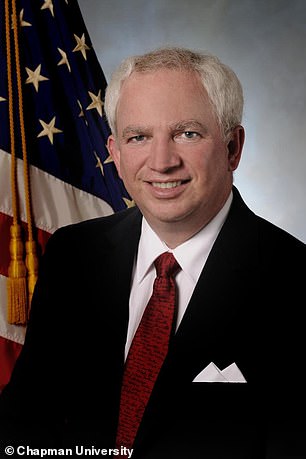 John C. Eastman wrote a controversial editorial for Newsweek that suggested Kamala Harris wasn’t eligible to run for VP. The op-ed was widely viewed as racist and untrue

But a tweet sharing the editorial was retweeted by the Trump campaign’s Senior Legal Advisor Jenna Ellis.

‘It’s an open question, and one I think Harris should answer so the American people know for sure she is eligible,’ Ellis later told ABC News.

A spokesperson for the Trump campaign never answered DailyMail.com’s inquiry on whether the campaign backed Ellis’ statement.

At the Thursday briefing, Trump was asked by a reporter whether he could ‘definitively say’ Harris was eligible since she was a ‘anchor baby,’ a negative term for immigrants who have children in the U.S. so that they can achieve citizenship.

‘So I just heard that. I heard it today. That she doesn’t meet the requirements and by the way the lawyer that wrote that piece is a very highly qualified, very talented lawyer,’ the president answered. ‘I have no idea if that’s right.’

‘I would have assumed the Democrats would have checked that out before she gets chosen to run for vice president,’ Trump went on, adding that the unfounded claims were ‘very serious.’

He then asked the reporter to explain what Harris’ problem was.

The journalist replied explaining that Harris’ parents were born abroad and weren’t citizens at the time of her birth in the U.S.

‘I don’t know about it, I just heard about it, I’ll take a look,’ Trump said.

His comments echoed the sentiments he pushed about President Barack Obama, the country’s first black president.

Businessman Trump was one of the most prominent voices to push the ‘birther’ conspiracy about Obama, doing so in early April 2011.

Trump, who was mulling taking on Obama in the 2012 election, made a number of bogus claims including that Obama’s ‘certificate of live birth’ was not an actual ‘birth certificate.’

The president was trying to push the racist narrative that Obama was born in Africa, where his black father was from.

Obama countered at the White House Correspondents’ Dinner in late April by jokingly showing the audience his ‘official birth video’ – the opening scenes of Disney’s ‘The Lion King.’

It wasn’t until Trump was running in 2016 that he admitted that Obama was born in the United States – though he also claimed, falsely, that it was Hillary Clinton’s 2008 campaign that started the ‘birther’ conspiracy theory to begin with.

Harris is the second person of color to appear on a major party’s presidential ballot and the second Democratic politician in recent years that Republicans have tried to suggest was born outside the U.S.

The Constitution spells out who is eligible for the presidency in Clause 5 of Article 2: ‘No Person except a natural born Citizen, or a Citizen of the United States, at the time of the Adoption of this Constitution, shall be eligible to the Office of President; neither shall any person be eligible to that Office who shall not have attained to the Age of thirty five Years, and been fourteen Years a Resident within the United States.’

And the 12th Amendment extends those qualifications to the vice-president.

Left unexplained is what ‘natural born citizen’ means – and the phrase is defined in no other piece of legislation.

But the 14th Amendment of 1868 is also in the Constitution – and defines who is a citizen.

In 1873 the Supreme Court ruled that the phrase ‘subject to its jurisdiction’ was intended to exclude children of non-citizen immigrants.

But that decision was in an arcane question – about whether the 14th Amendment only guaranteed rights to people who were U.S. citizens, and didn’t cover anyone who was only granted ‘citizenship of the state’ by an individual U.S. state – in other words, were free to live and work there.

The majority opinion includes a note that ‘the phrase “subject to its jurisdiction” was intended to ‘exclude from its operation children of ministers, consuls, and citizens or subjects of foreign States born within the United States.’

Two years later the high court ruled that immigrants can only have automatic citizenship for their children when they – the adults – owe ‘allegiance’ to the U.S. and not to a foreign nation.

The concept of allegiance means little today but most people at the time were born in monarchies with limited rights and were subjects, not citizens – and until you became an American citizen, you were still owing allegiance to that monarch, it was argued. ‘Allegiance’ to a foreign monarch and being subject to American ‘jurisdiction’ were not compatible, the justices ruled.

But then in 1898 the Supreme Court ruled that a specific Chinese immigrant’s child was a citizen of the United States, citing the 14th Amendment’s text.

In the case, about Wing Kim Arg, the justices ruled that ‘a child born in the United States, of parents of Chinese descent, who, at the time of his birth, are subjects of the Emperor of China, but have a permanent domicile and residence in the United States, and are there carrying on business, and are not employed in any diplomatic or official capacity under the Emperor of China’ was automatically a citizen.

That ruling has been the bedrock of birthright citizenship – known as jus soli – and has led to the other opinions about the amendment being seen as being superseded – although they have never formally been overturned.

The dissenters – or in cruder terms, the losers – said the 14th Amendment and those who passed it intended citizenship to be only for those not claimed by any foreign power in any form, so natural-born citizenship was hereditary – a concept known as jus sanguinis.

Since then the Supreme Court has ruled that a woman born in New York to one U.S. citizen father but brought up abroad was eligible to run for president – she did not – but has never explicitly ruled on whether someone born to one or two non-citizens can.

The fact that scores of millions of Americans have been considered citizens by the federal government in exactly those circumstances would seem to suggest how the justices would rule.

But it leaves Kamala Harris ‘birthers’ a very narrow opportunity to argue that the Supreme Court has never ruled clearly that being born in the U.S. to non-citizen parents makes you ‘natural born’ – as opposed to simply a citizen.

One – in a Newsweek op-ed – claimed that because Mexican guest-workers’ American-born children had been deported in the 1920s, 1940s, and 1950s – the idea of ‘birthright citizenship’ for all really dates from after Harris’ birth.

He also claimed that it was unclear exactly what Harris’ parents’ legal status was and that if they did not have green cards, that might disqualify her too.

Harris, however, is not the first candidate to face questions over eligibility thanks to her parents.

Obama – as well as the bogus claim he was not born in the United States – faced ultra-fringe birther questions because his father was a Kenyan; and the oldest example was Chester Arthur, whose mother alone was American and who also faced questions over a rumor he was born in Canada, not Vermont.

Unhelpfully for birthers, none of those who faced these questions were successfully disqualified by any court – in fact, no challenge of the kind has ever succeeded.

Perhaps even more unhelpfully, the Newsweek op-ed writer, law professor John Eastman, previously campaigned for Ted Cruz, who was born in Canada to one U.S. citizen parent and a Cuban father, suggesting his claim that Harris might not be eligible was more politically expedient that constitutionally sound.