Trump says he won’t pursue Kamala Harris birther conspiracy but refuses to say whether he thinks she’s eligible to run for VP, adding the matter should have been ‘vetted by Sleepy Joe’

President Donald Trump said he will ‘not be pursuing’ baseless claims that Sen. Kamala Harris is ineligible to run for vice president because both of her parents were not naturalized citizens at the time of her birth.

Trump clarified on Saturday his presidential campaign won’t advance a new ‘birtherism’ theory, after he repeatedly questioned President Barack Obama’s place of birth, which was Hawaii.

Harris was born in Oakland, California in 1964 to parents who emigrated from Jamaica and India. She is an American citizen eligible for federal office.

When asked about her eligibility to serve as VP on the ticket with Joe Biden, Trump said: ‘I just don’t know about it, but it’s not something that we will be pursuing.’

President Donald Trump said he will ‘not be pursuing’ baseless claims that Sen. Kamala Harris is not eligible to run for Vice President despite being born in the US 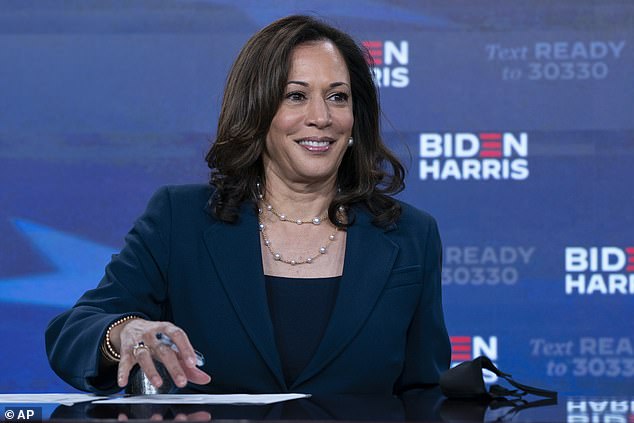 Harris was born in Oakland, California in 1964 to parents who emigrated from Jamaica and India. She is an American citizen eligible for office. An op-ed article published in Newsweek last week questioned her eligibility claiming that there could be issues as both of her parents were not naturalized citizens at the time of her birth

However, Trump didn’t actually say affirmatively if Harris is eligible for the role.

‘I know nothing about it, but it’s not something that bothers me,’ he said during a news briefing at his golf resort in Bedminster, New Jersey.

When pressed on the issue the president said: ‘If it was an issue you’d think it would have been vetted by sleepy Joe.’

The controversy was sparked by an op-ed in Newsweek published last week that has been denounced for peddling ‘birtherism’.

The article, penned by John Eastman, a professor at the Chapman School of Law and a fellow at the Claremont Institute, claimed she was ineligible for vice president because her parents immigrated to the US and sparked outrage for pushing out false theories.

Newsweek apologized on Friday saying it ‘was never intended to spark or to take part in the racist lie of Birtherism, the conspiracy theory aimed at delegitimizing Barack Obama, but we should have recognized the potential, even probability, that that could happen’. 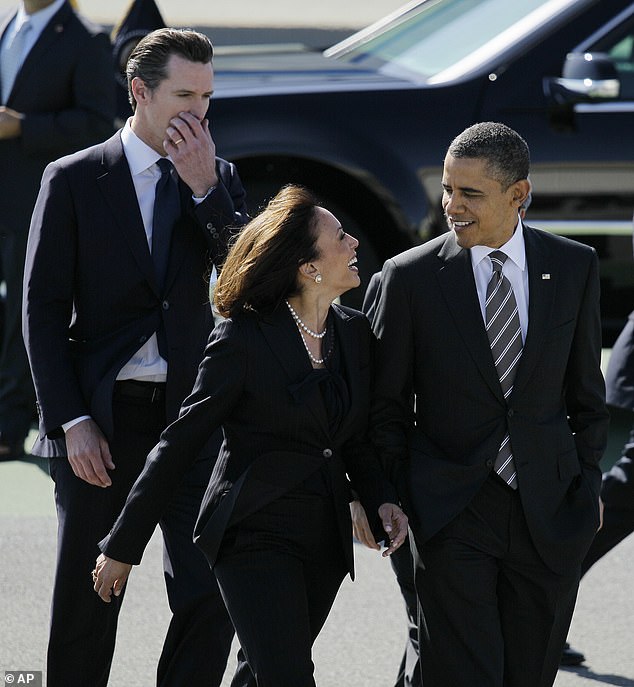 Trump clarified on Saturday his presidential campaign won’t look into new attempts at ‘birtherism’, which is the conspiracy theory that President Barack Obama was not actually born in the US despite being born in Hawaii. Harris and Obama pictured in 2012 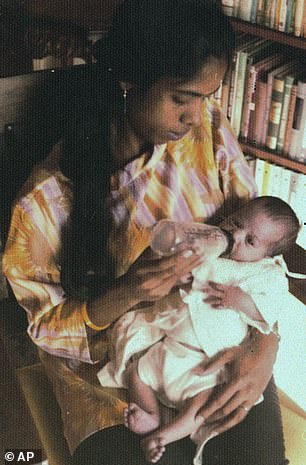 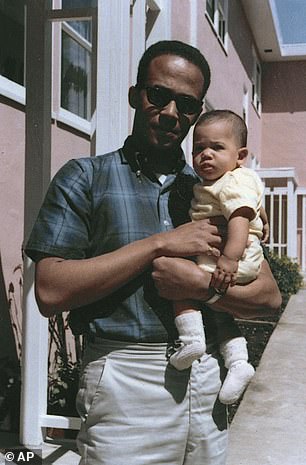 Kamala’s parents emigrated to the US from India and Jamaica. Under law, anyone born in the US is a citizen. Kamala was born in California. Baby Kamala pictured left with mom Shyamala Gopalan Harris and right with father Donald Harris

Speaking on the article Trump referred to its author as a ‘brilliant lawyer’ and said the false claim of Harris’ alleged ineligibility ‘doesn’t bother me at all’.

Trump is no stranger to the original birther conspiracy theory against Obama and has repeatedly questioned if Obama is really a US citizen.

On August 11, Biden chose California senator Harris as his running mate in the 2020 election, putting past conflicts behind them in the race for the White House.

She’s the first woman of color to appear on a major party’s presidential ticket.

‘I need someone working alongside me who is smart, tough, and ready to lead. Kamala is that person,’ Biden said in an email to supporters last week.

‘Joe Biden can unify the American people because he’s spent his life fighting for us. And as president, he’ll build an America that lives up to our ideals. I’m honored to join him as our party’s nominee for Vice President, and do what it takes to make him our Commander-in-Chief,’ Harris tweeted.

Trump slammed Harris as a ‘total disaster’ after Biden announced his pick.