President Donald Trump went after former Obama CIA Director John Brenna, calling him the ‘genesis’ of the Russia probe and saying he ‘disgraced himself.’

The attack came after has spent weeks sharpening his own criticism of Trump – including calling Trump’s latest demand for a Justice Department investigation of the FBI over its Russia probe a ‘disastrous path’ for the president.

‘This guy is the genesis of this whole Debacle,’ Trump vented Monday morning, after he demanded the Justice Department probe whether the FBI ‘infiltrated or surveilled the Trump campaign.’

President Donald Trump went after former Obama CIA Director John Brenna, calling him the ‘genesis’ of the Russia probe and saying he ‘disgraced himself’

Trump fired off three tweets quoting from Dan Bongino, a former Secret Service agent who is now a conservative commentator who appeared on Fox News on Monday morning.

Trump then turned to the golden showers dossier, which contained allegations about his unverified conduct in a Moscow hotel room during the Miss Universe pageant. 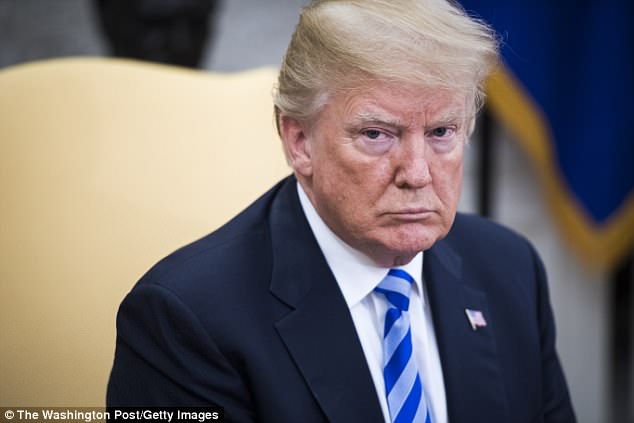 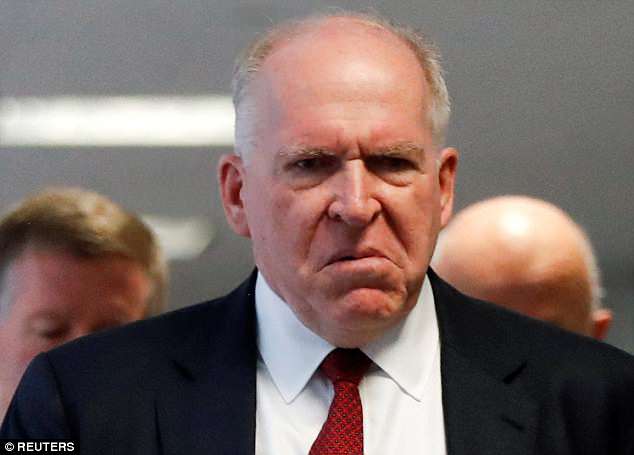 ‘It is that simple. This guy is the genesis of this whole Debacle. This was a Political hit job, this was not an Intelligence Investigation. Brennan has disgraced himself, he’s worried about staying out of Jail.’

The quotes were taken from Bongino’s Fox appearance, although there were several minor changes in the wording.

Trump went after Brennan after a weekend where he tried to keep the focus his FBI investigators and the origins of the Russia probe that has bedeviled his administrtion.

It also comes as Brennan has raised his public profile sharpened his direct criticism of Trump.

Hours before Trump attacked him on Twitter, Brennan retweeted Trump’s demand for an investigation of the FBI and told GOP leaders they ‘enable Mr. Trump’s self-serving actions’ if they fail to stop him. 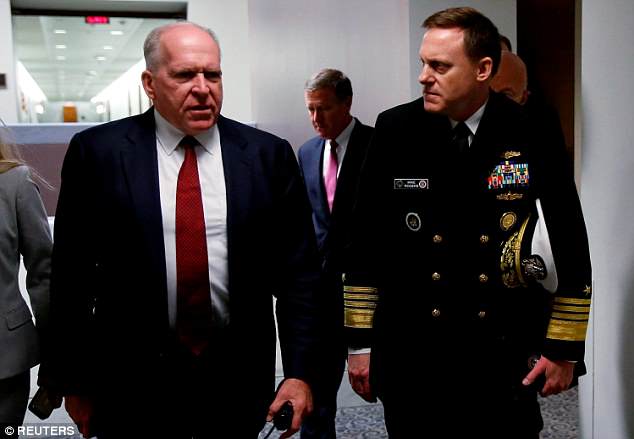 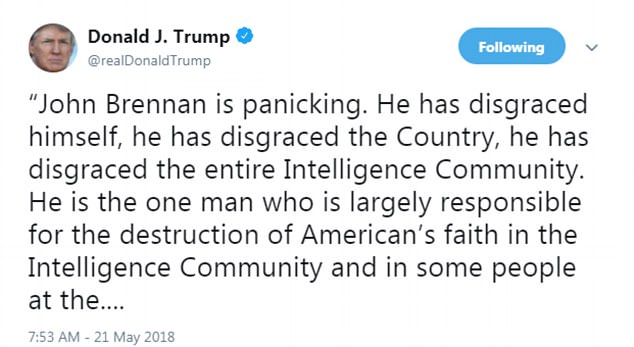 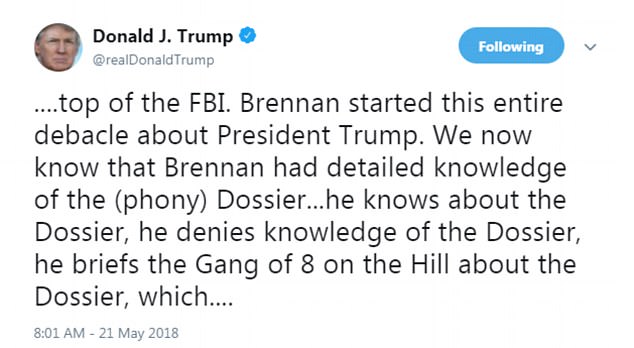 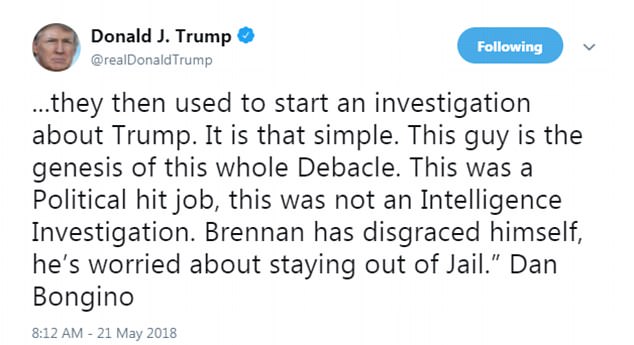 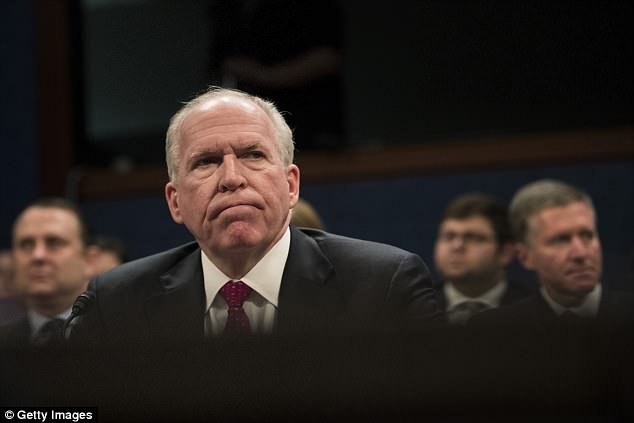 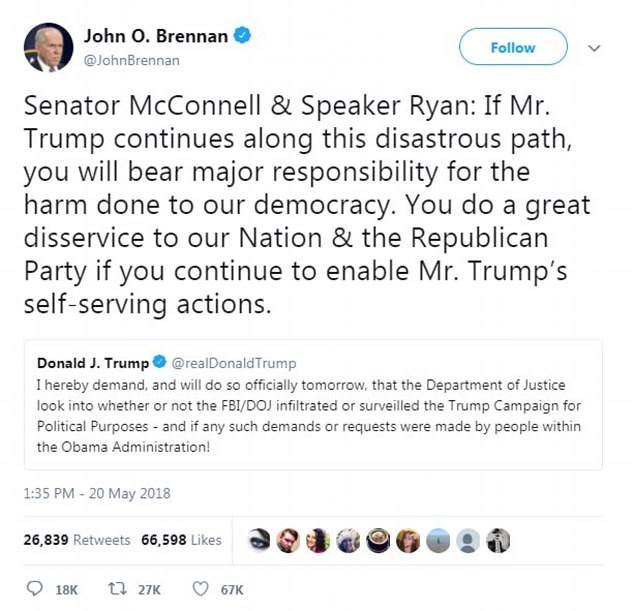 Brennan has recently emerged as a sharp public critic of Trump 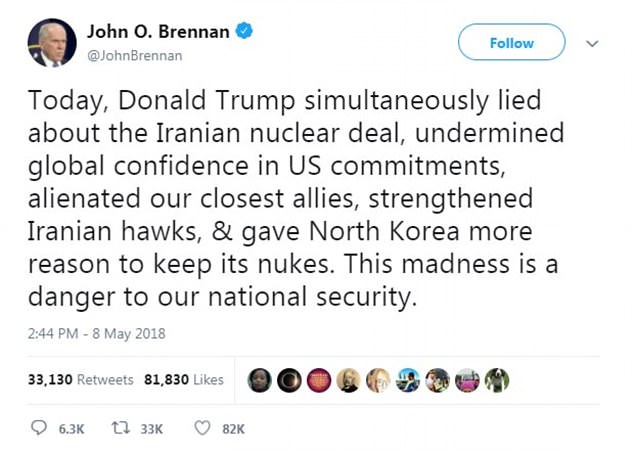 Brennan has recently emerged as a sharp public critic of Trump

‘Senator McConnell & Speaker Ryan: If Mr. Trump continues along this disastrous path, you will bear major responsibility for the harm done to our democracy. You do a great disservice to our Nation & the Republican Party if you continue to enable Mr. Trump’s self-serving actions,’ Brennan wrote.

Brennan continued: ‘Jim Clapper is a man of integrity, honesty, ethics, & morality. You are not. Jim Clapper served his country for over a half century, including in Vietnam. You did not. By your words & behavior, you diminish the Office of the Presidency.’